10. HUGE MECHANICAL ELEPHANT WALKS THE STREETS AND RONALD MCDONALD GETS L IN A STRESS...

August 22, 2017
The Euro Velo 1 (or Velodyssee) was marked with small orange signs. The route runs all the way from  from the UK, down the coast of France and into Spain. We were only doing a small chunk in comparison. We cycled west out of Nantes along the Loire river towards the sea, then south down the coast before stopping around 6:30pm at a campsite in St Brevin-les-pins.

Earlier in the day we had got slightly lost in Nantes. The cycle route zig zagging here there and everywhere along with the bustle of the city, had thrown us off course. This wouldn't have been a problem if the sun wasn't so bright making it impossible to use the screen on either the phone or the iPad. It was partly my own fault for turning down the screen brightness on both so as to charge them quicker with the solar panel. The solar panel I might add was one of the most useful pre trip buys we made and in this glorious sun was working brilliantly, clipped onto the top of the panniers. There was enough cable allowing me to peddle use the phone/iPad whilst they was charging, handy, especially for writing this blog. After getting quite irate at not being able to unlock either device for the sun, I gave up and turned to a more traditional method and consulted the map and compass.

Just out of Nantes we saw the most amazing mechanical elephant. It must have been 20ft tall, constructed mainly of metal, some wood and some leather for flapping ears. The creation moved it's huge legs, flapped its ears and tail, opened and closed it eyes, sprayed water from its moving trunk and even peed! Every part of the elephant moved realistically via hundreds of pistons, cogs, and rams, it really was impressive. 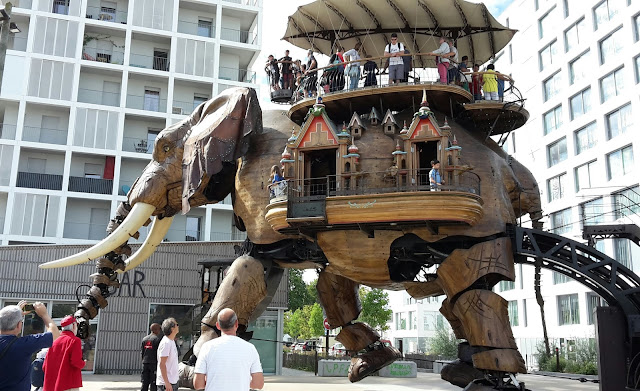 Out of Nantes and down a long straight section of cycle path we passed a road side stall selling veg. We had no room for pumpkins or potatoes and sadly there were no more cucumbers left but we did come away with handfuls of tomatoes leaving a few coins in the honesty box.

We'd been cycling a while, sipping and snacking on the move but it was too tempting not to stop. The universal golden M drew us in and we made a pit stop for a dirty McDonald's. We joked about the drive thru but instead L went in to order whilst I babysat Tandy. We waited outside for the girl to bring out our food. I'd been building up an appetite for a chicken burger and chips and L for a big Mac so when the girl came binging me only a meagre 4 chicken nuggets I was disappointed to say the least. L's pigeon French needed a little fine tuning. We did however get a free Coca-Cola glass which was of absolute no use to us whatsoever. There was only room for one drinking vessel on board Tandy, our well travelled tin cup, so we gave it to a French lady who'd asked if she could have it. By the time L had come back from reordering a chicken burger and chips, his Big Mac was cold. #Fail.
cycling france fox on a lead language barrier McDonald's issues mechanical elephant Nantes sell up and travel tandem adventures tandem bicycle tandem two