August 25, 2017
It was Thursday. We awoke to rain bouncing off the tent, not bothering to get up in the hope it would go away we fell back to sleep. It didn't go away, I thought we'd left all that behind in the UK but for today at least it would appear not. Towel toga made a come back under my crappy pac-a-mac. At least it was still will quite warm whilst raining so neither L or myself were actually cold, just sodden.
Tandy was on top form, no groans or squeaks, the smooth EuroVelo 1 route was better suited to this contraption, the canal tow paths from the Midlands to London really were not.

The route had us winding round the perimeter of field after field in an area of flat lowland. We cycled the whole day though this area. There was hundreds of water inlets dividing fields with small wooden bridges for us to cross. Despite being flat it was the hard cycling because of a constant head wind.  We were barely moving forwards and after a couple of hours of the wind getting evermore stronger we decided to head off route to a small town called Bouin. We stopped for fresh bread and a treat in Bouin which was handily just round the corner from a campsite I'd found on google maps. 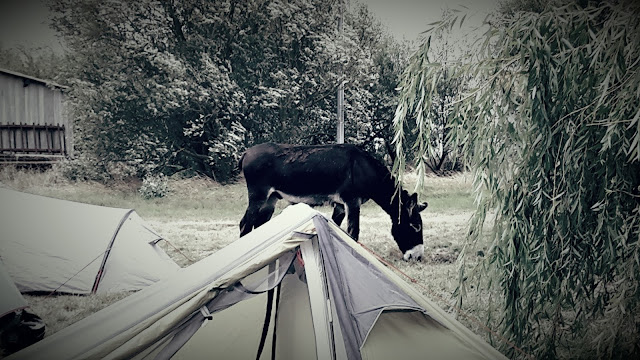 The campsite was no more than a farmers grass field with a few tents pitched around the edge of a large pond. There was a resident donkey and a chap wearing cowboy boots and hat with a pet bird of prey on his arm. He'd emerged from a camper van parked to one side, talk about taking all your pets on holiday! Neither myself or L are big enough twitchers to know exactly what species it was but it looked impressive non the less.

French campsites were not keen on providing toilet paper, this was becoming apparent so it was good we had brought with us some provisions. The proving to be useful pre trip purchase was a bag of 50 compressed towels/cloths. Made of 100% biodegradable cellulose they're about the size of £1 coin when compact so take up minimal space, and when subject to a few drops of water rapidly expand into decent size cloths. Quite amazing to see really, useful for a body wash when wild camping or emergency loo roll in any situation. L had re named them 'explosion wipes'.
cycling france donkey in campsite Exploding wipes fox on a lead pets on holiday sell up and travel tandem adventures tandem two