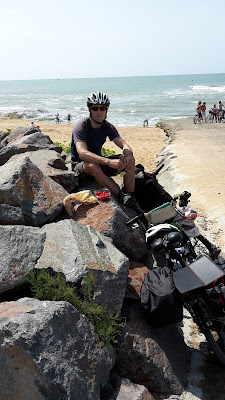 It was friday and the third day in a row we'd had pain au chocolate's for breakfast...whilst still in bed. It had become the new norm. L's staple breakfast of poached eggs and avocado on toast which he'd had everyday for the last year, was out and pain au choc's were in. Some days we'd even have two! We were really troffing on the pastries which wasn't doing any good for my low sugar diet and I was starting to wonder if despite expelling a load of energy peddling everyday, that we might return heavier than when we set out. 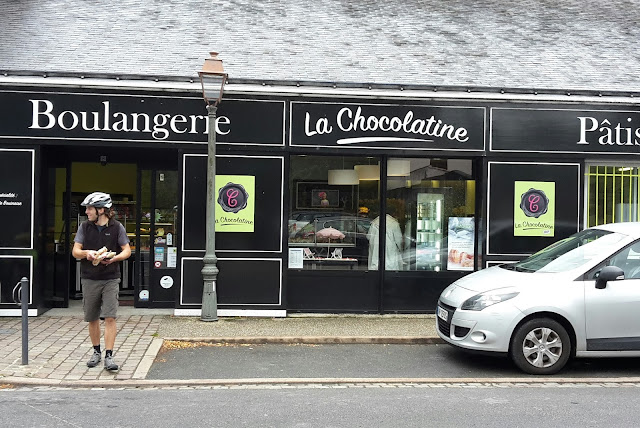 After yesterday's not so early start we planned to get up early this morning so as to put in a decent effort but alarm issues meant we woke up late. I'd forgotten that the iPad was still running on UK time and it was the second occasion I'd made this mistake. L was not impressed!

Through the last of the flat plains we passed a lot of aquatic capturing equipment; rows of wooden huts which were stood high on stilts each with an overhanging arm suspending a huge net above the water. The scenery changed dramatically as we entered a built up seaside town, the cycle route merged with the pedestrianised beach front for as far as the eye could see. This was a complete nightmare, a moving obstacle course, weaving in and out we tried to avoid the beach goers. It was rammed. Once we'd successfully negotiated the sea front the EuroVelo 1 took us slightly inland though a wooded stretch which continued for miles and miles. It was great cycling, mostly downhill, an obvious preference for us on Tandy, with consistent shade under the canopy.
Later on we stopped on a beach further down the route for a picnic and watched as a British family parked up their bicycles and stepped onto the beach. Two of their bicycles were small folding ones, one had a front pannier rack. The type we could have done with... We sat there pondering, we couldn't offer to buy it as we only had €9 left in cash, perhaps they'd trade for a baguette? ...Most likely not, we left them to continue their picnic, we needed to swing by a bank. 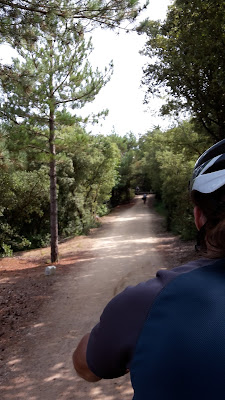