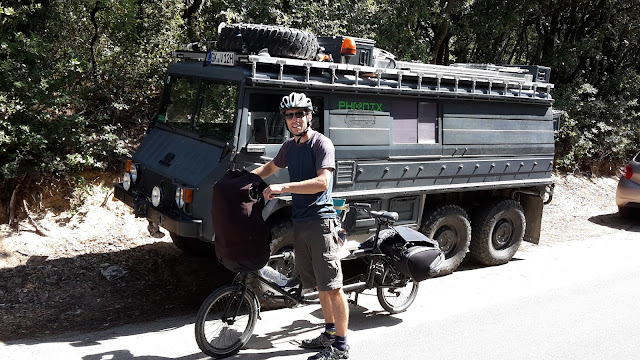 It was about 5.30pm when we passed a campsite which we thought would do, but we changed our minds when we were told the price of €24. So far we'd been paying €10-15 a night so we decided to continue cycling. After all the weather was great, sunny but not too hot, the route was particularly beautiful and we reckoned we had another hour of energy left in us.
We were glad we continued because we passed through a village having a bit of a knees up. There was a band, country dancing, beer and food on the go, flags bustling in the breeze and a huge inflatable arch over the cycle path. We cycled victorious over their finish line...only our own finish line; Aubeterre-sur-drone, was nowhere near here. 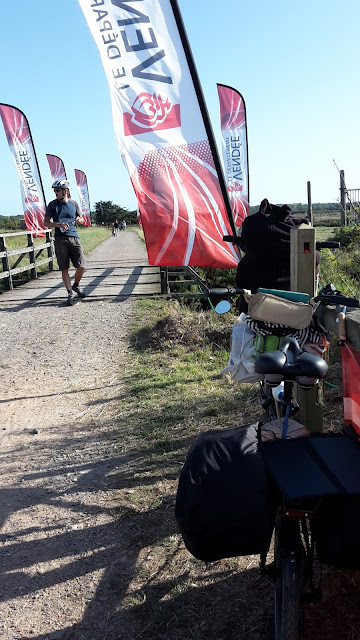 Pinpointing a campsite to aim for on google maps we cycled for another hour, however when we rocked up we were confronted with the dreaded word 'COMPLET' (full). With no room to squeeze in a small tent in we cycled on to another nearby campsite, they too were COMPLET. Nightmare! It wasn't until we arrived at a fourth campsite, this one a little further along in Saint-Vincent-Sur-Jard, that we manage to get a pitch for the night. This was lucky for two reasons; the first being that by this point we'd exhausted all campsites within a 5mile radius. The second reason being that it was now after 7pm and some campsites close their reception at 7pm...This was one of those campsites. Although the door was now locked fortunately for us the campsite owner was still inside and he gladly opened up to take our euros.

This whole 'complet' situation brought back memories of a France trip in 2010 when we'd taken the car across on the ferry. One particular evening when looking for a BnB to stay in we'd faced 14 consecutive 'complet's'. By that point it was about 11:30 pm and we had almost settled on sleeping in the car when we stumbled on the Cordon bleu. This is really a story in itself but in brief; our room for the night turned out not to be in the building we'd seen from the roadside, but in a dilapidated porter cabin in the woods. Neither of us had got much sleep that night for fear of being murdered. It was one of those experiences we'd never forget. 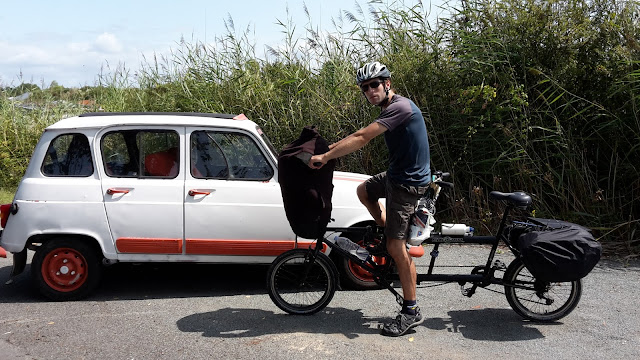