14. THE MOTHER OF ALL COINCIDENCES...

August 28, 2017
As coincidences go this was a pretty good one; L's ex work colleague from Rugby was staying with his family and their friends in a holiday villa in a small village not far from our route. Back in the UK we had said that we would drop by if we had the time and as luck would have it, we did. Little did we know that by the end of this evening we'd discover the mother of all coincidences; I would be sat at the same table as my year 7 geography teacher's sister! What a small world we live in! 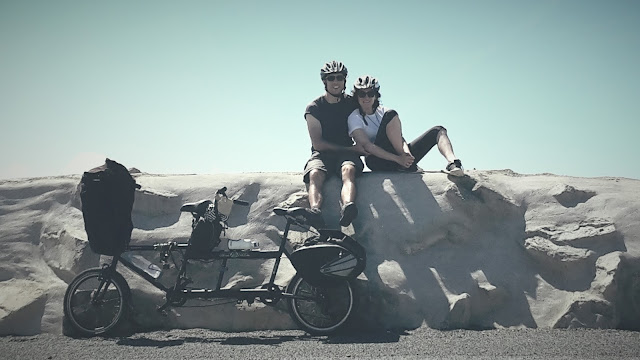 We followed our coastal route until we were directly south of the villa then we headed north on a canal tow path which would bring us straight into the village. The coastal route before the tow path was a particularly wiggly one today, and a road cycle distance from this mornings campsite to the villa would have been perhaps 2hours. We however had spent over 6hours wiggling around following those Euro Velo 1 signs. We'd taken a break around 2:30pm after an insect, well a u.f.o, had flown into my mouth at the exact same moment I had inhaled. For me this is pretty rare as I normally breath through my nose. I don't know what it was but it got stuck in my windpipe and my coughing fit had started to unsteady Tandy. Until that point the thought of chocking to death on the back of a Tandem had surprisingly never entered my mind, but it was happening, well not the death part, but the u.f.o did remain stuck in their for most of the day. Every now and again I'd have a coughing fit to try and dislodge it, this was really irritating L.

The canal tow path was decent, no ruts or bumps. Scores of fish were swimming in huge shoals along the surface of the water, quite a spectacle. L suspected were trying to catch surface insects. 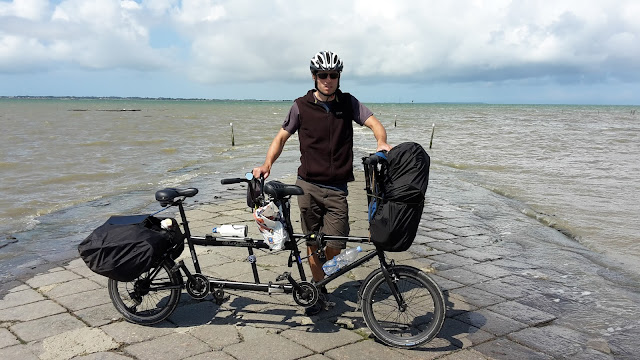 It was one of those moments when it feels like your stomach has just dropped off a cliff. To my absolute horror whilst sending a text of our arrival in Lairoux to the Rugby revellers at the villa, I realised that we were in the wrong village. We were in Lucon. I'd majorly cocked up in saving the wrong village on Google maps as the villa's location and I now had only a couple of seconds to decide how I was going to break this to L. Understandably L thought I was taking the piss, and looked absolutely furious when he realised I was in fact not joking and exclaimed at the top of his voice...'You have to be kidding me!' I was frantically searching the actual village location and upon discovering we needed to peddle at least 40 minutes in the wrong direction was finding myself in another how-to-break-the-bad-news situation.

I must say all the dramas of the day were worth it in the end. We had an awesome night with the Rugby revellers they spoilt us with drinks and a home cooked meal (which for a change wasn't noodles or couscous), a hot shower which didn't need a button repressing every 10 seconds, a comfy sofa bed, the luxury of a washing machine and then there was the mandatory adding of at least 5 pieces to the worlds most difficultly jigsaw puzzle. Thanks guys.