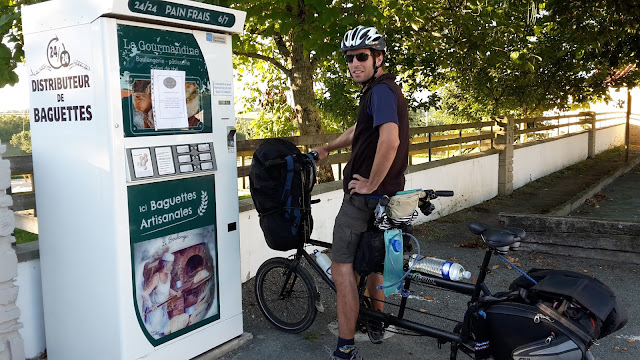 Today was Monday and It was to be our longest day of cycling yet. An early start from the villa allowed us to blast it. It took almost 2 hours to get back to the Euro Velo 1 where we left off yesterday but once back on track we were flying. Note; beforehand we did take a few moments to swing by the automatic baguette dispenser in the centre of the village (a novel recommendation by the Rugby revellers). 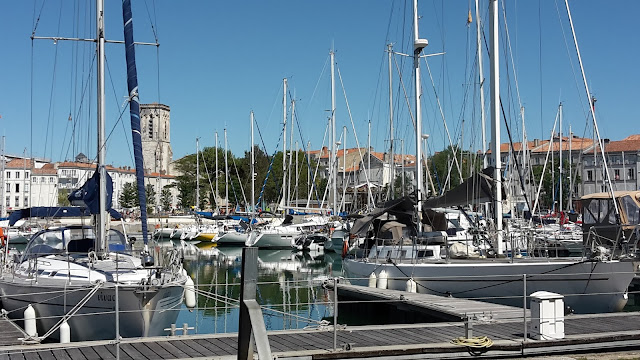 It was a blistering day the route ventured inland slightly and we followed the canal to La Rochelle. This was where we met another couple of young touring cyclists (not as crazy to be on a tandem), and for the rest of the day we kept passing each other, to the point where it became hilarious.
We stopped in La Rochelle for a huge amount of ice-cream (from the biggest selection I have seen in my life), for crepes and to admire the architecture and absorb the prettiness of the place. We made use of the facilities in the sea life centre and then continued on our way towards Rochefort. Our cycling friends over took us once more and us them about an hour later when they'd stopped under a tree.
The front chain was looking quite slack..perhaps the next component to cause problems we decided to ignore it. The good news was that we'd stopped re tightening the spokes each night; they seemed to cause no more problems.

This evenings campsite had a swimming pool. L sadly had no swimmers because they didn't make the cut when we had to ditch some weight from the panniers back in London after the wedding. In fact L had managed to condense his wardrobe to 1x shorts, 2x socks, 3x boxers, 2x quick dry tops, 1x short sleeve shirt (for the party), 1x long sleeve shirt (incase cold), 1x useless pac a mac.
Having said that even if he had still got his swimwear, the amount of screaming kids splashing around the pool combined with the crappy euro pop blasting out from god knows where, was more than enough to put him right off. 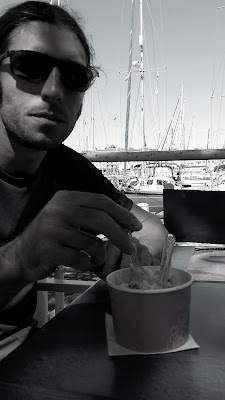