August 17, 2017
Monday was the start of our 500 mile journey. It was a few months ago when we first concocted the idea of cycling from our house in the midlands to the south of France...on a folding tandem bicycle (just for extra laughs.) Admittedly a number of drinks consumed by both parties may have been a strong influence in the decision making process. Neither of us cyclists, we bought the thing off of eBay, collected it from a run down warehouse in Birmingham (a story for another day), took it out on a 4.5 mile practice cycle and then deemed ourselves fully qualified cyclists and thus trained and ready for the trip ahead. Tandy then sat in the living room for over a month, ready and eager for this day.

After handing over the keys of our house to the new buyers we set off in our hastily overpacked car, found a secluded layby down the road, stopped and reorganised the car. I'd got cramp after being completely boxed in with stuff and a pot of yogurt had spilt everywhere. Not long after leaving the layby a tin can which I'd picked up from the layby with the intention of putting in a bin  (good Samaritan I know) fell over emptying a rancid cocktail of decomposed slugs and god knows what else, all over my lap, I smelt divine. We left the car at a local garage next to where L had worked. From there we unpacked Tandy and peddled towards the canal. This was is it. Homeless and on the road. 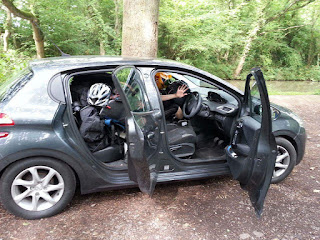 We got a couple of hours cycling in before deciding it was time to pitch the tent. We past a German fellow cycling the other way; London to Wales, stopped to have a quick chat and noted how much less baggage he was carrying in comparison to our overloaded contraption. And with the aid of another guy, who was pedalling home from work in a smart blue suit, we hurled Tandy over a tow path gate. I was just relieved he didn't get mud down his suit. There turned out to be 3 more gates along that stretch.
The particular grass field we had chosen as prime camp land was next to the railway lines, we pitched the tent in a dip completely hidden from view. We weren't too fussed about the occasional chug of a passing train, but it soon became apparent that it was actually the west coast main line with slightly more than an occasional passing train... It wasn't until we started cooking that 5 horses appeared over the hill, and like a playground game of 'what time is it mr wolf' slowly got closer and closer, until they'd completely surrounded us. They then stated routing though our food, playing with the tent guide ropes and being a complete nightmare. After a while and to our delight, it appeared all 5 had lost interest in the imposters camping in their field.
Post drama, we now realise their retreat was tactical and allowed them to plot how best to play their trump card. And so in the dead of night under the cover of darkness they returned, surrounded our tent with their heavy breathing and digestion noises (wrongly blamed on L), and attempted to eat our tent, all of which successfully scared us awake! 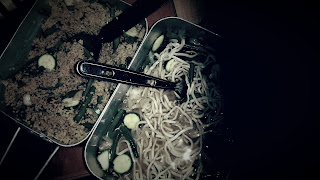