August 19, 2017
Yesterday evening we'd diverted off the tow path into Milton Keynes. The weight of all the luggage and myself on the back wheel, combined with a very bumpy section of tow path, and of course Tandy's joke 20inch wheels of Chinese quality, had resulted in a broken spoke. Halfords, Go Outdoors, Decathlon etc were all still open but none had the right size spokes and by the time we'd zigzagged from one to another we realised we'd broken 2 spokes. We should've been camping last night but instead found ourselves sleeping in bunk beds at MK YHA.

Red sky at night: Shepard's delight. It was true, Thursday morning was a stunner. Finally some dry weather. We spent the morning at a bicycle repair shop, we'd phoned every single one in MK in search of the right size spokes but to no avail. We found a repair shop who had the time to repair Tandy but they had to go and track down some spokes of a similar size (not quite perfect but best of a bad situation) from elsewhere. It turned out we'd broken 5. They fitted them and to our horror charged £54 for the privilege!
Thankfully the tow paths south of MK were how I had envisaged all tow paths to be, flat and hard surfaced.

Looking for a suitable field to pitch the tent we passed a campsite sign and decided we'd check it out.
A short cycle off the tow path and we'd arrived through the gates of a rather grand house. We passed a handful of caravans parked up and were ushered to the orchard in front of the house by a woman coming out of one of the vans. There were no other campers, just ourselves. It turned out we'd stumbled across a hippy commune! 14 people living in the big house and a handful more in the parked vans we'd passed. We put up the tent in between the apple trees and I managed to get the washing line up which I was pleased about, then were shown the way to the Victorian outside loo. The house and grounds were a work in progress, the veg patch and gardens more complete than the house. A smaller group of hippy resi's having a BBQ and smoking a lot of pot came down to our tent later on bringing us food, hot off the bbq.
Room with a view and room service too, we'd got a winner here. 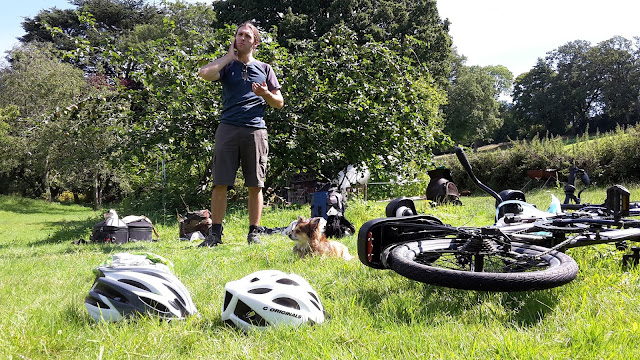