7. TANDEM NIGHTMARE ON THE LONDON TRAINS..

August 19, 2017
We'd successfully (subject to ones personal interpretation) followed the canal network from the Midlands to the Thames. Cycling across London was out of the question because time was getting on. Looking lost and unusual we attracted the attention of two BBC producers on Brompton bikes who stopped to chat about our journey. Despite originally heading in the opposite direction they kindly offered to escort us on our contraption to the nearest train station. It was a sight, our 3 bike strong mini wheel club zipping through streets and side alleys. Those bromptons were nippy, peddling like the clappers we just about kept up.

Wheeling Tandy onto a train was difficult, people were stood in the way and not just that but when wheeled on, the front and back wheels literally touched door to door the width of the train carriage. Trying to jiggle Tandy 90degrees so as not to block the doors either side involved what seemed like a million point manoeuvre. Back forth back forth, inch by inch, it was so awkward. We must have bashed handfuls of people.
We had to switch trains at Waterloo, it was busier, pretty much rush hour now. I had a small meltdown over taking Tandy up the escalator to Waterloo East. Myself not keen on the idea at all. L by this point was in a 'not give a f**k' mindset and was just looking for the easiest option, the escalator trumped the stairs. I highlighted my concern for if we were unable to support the weight of Tandy and it fell, wiping out a whole escalator of people, it would be pretty embarrassing. We settled on carrying the contraption up the stairs.

We repeated the nightmare of physically getting onto the train once more and when we finally made it off the train and to our friends flat, we pretty much collapsed with exhaustion...but not before we noticed another broken spoke...... 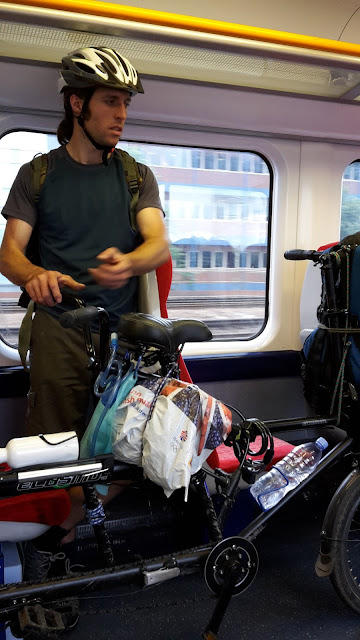