9. PATISSERIES GALORE AND THE GERMAN LADY WITH THE LITTLE DOG

August 22, 2017
I can't say either of us enjoyed sleeping in a chair on the ferry. A French lady wittering over the intercom woke us up with news we would soon be arriving in St Malo. I felt pretty gross. Luckily there were showers but I had to step over various sleeping bodies in order to get there.
Off the ferry we put Tandy back together attracting the attention of a British couple who had been speculating what had been in the bike bag. They'd thought some sort of sports equipment, windsurfers or something similar and seemed delighted that it was a folding tandem. They took photos, oblivious Tandy was no Bike Friday, instead a China crisis made of cheese.
We set off into St Malo where we spent a few hours looking around the old walled town. Oh and most importantly testing the produce from a handful of patisseries. Well it would be rude not to.

Catching a train from St Malo down to Nantes via Rennes gave us a head start incase of any more spoke related issues. Waiting for the train at St Malo we decided to sit out in the sun and brew a coffee using a mini silicon collapsible kitchen funnel and a paper filter (a substitute for a V60 for those in the know).

Once In Nantes we cycled to a campsite. It terms of campsites it was pretty plush, we pre ordered our baked goods for tomorrow's breakfast and to L's delight there was a crepe van. No sooner had we finished pitching the tent did a German lady with a dog arrive and drop her bags right next to us. Through the language barrier we gathered she was also travelling the same coastal route but was going a lot further, all the way to Spain...and on foot! She also gestured to having no idea how to put up her tent, so both L and I did It for her. I later wondered if this was a ploy and perhaps she got someone in a different campsite every night to do the same thing. We'd never know, but she seemed nice.
We'd decided we would re tension the rear wheel spokes every night to counteract them working loose throughout each day's cycle: Slight hassle but if it stopped anymore breaking... 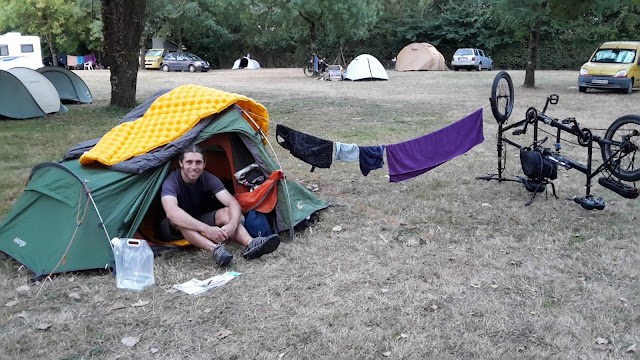