16. ESCAPING THE DOG AND LOST IN A FARMERS FIELD... 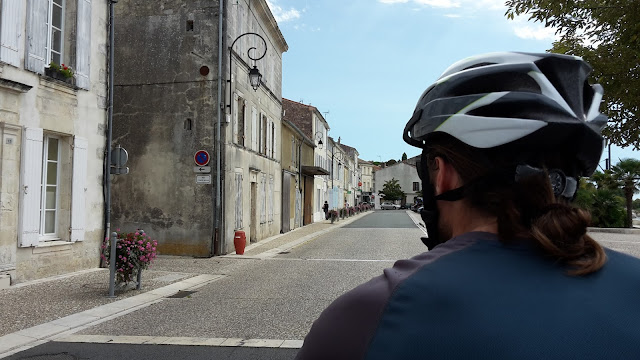 It was Tuesday, 34 degrees and the hottest day so far. We had every intention to set off earlier than we did (a running theme throughout our cycle trip) but our late departure did mean that we caught the bread van at 9:30 on our way out of the campsite. Rochefort was the point at which we left the ease of Euro Velo 1 cycle route behind and headed inland for a few days, roughly south east, to our destination of Aubeterre-Sur-Dronne. Today's aim was to make it to Cognac. We were cycling through wine country, picturesque views with field after field of vineyards. In the end we settled for a campsite not far from Cognac. It was right next to the road we were travelling on, the campground looked pretty, there was plenty of trees for shade, it wasn't too busy, and it was the cheapest yet at €7 all in.

Our supermarché routine was as follows; I would stay outside babysitting Tandy who'd be parked mostly the shade (for the benefit of myself) but with the rear of the bike in the sun allowing the solar panel to charge the technology. I'd use the time to catch up on writing the blog whilst L struggled around the isles like a lost sheep. Note: L hated all types of shopping but in particular food shopping.
When a couple of days ago we ran out of shampoo, L added it to his shopping list (priority over pastries!). It wasn't the until that evening whilst in the shower that I read the label detailing L's choice of shampoo: 'Après shampooing' ...For those who know as little French as L, après translates to after. L had purchased a bottle of conditioner and as hard as I tried there was just no frothing it up. We washed with solely conditioner for the next 3 days, which if you've never tried it is a major slip hazard! 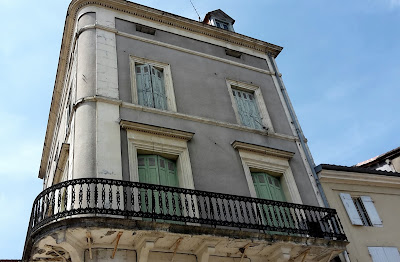 Wednesday and Thursday were hard going. Wednesday for the distance and Thursday for the terrain. Towards the end of Wednesday the road was turning into more of a track and it looked like we were heading into a farm yard but Google maps said to keep going. So we did, it wasn't until we were entering the farm yard that our unusual sight caught the attention of a rather large dog, who promptly started barking...."That better be chained up!..." It would appear L had now notice 'big dog' too...
Big dog started to move towards us whilst barking, he definitely wasn't tied up. Peddling faster we found ourselves through the farmyard and straight into a field. Google was still saying turn right but there wasn't anything other than a vague track through the field. Not wanting to cycle past big dog again we opted for the field route and bounced our way along, trying not to think of the spokes, until about half a mile later we rejoined a 'real' road again. 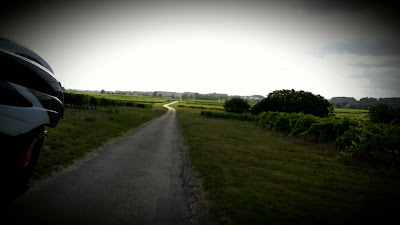 With Thursday even hotter than Wednesday we were by now very used to the routine of being constantly drenched throughout the day and emitting an odorous mixture of sweat and sun cream. We'd both given up on deodorant about a week or so ago as it proved completely useless in our situation. More than ever we appreciated a shower at the end of each day! And probably our camping neighbours too! With one mammoth push we managed to reach Aubeterre on Thursday night but it was a killer. Chalais to Aubeterre was ridiculous for our (now only 6 working) geared contraption. Walking we'd push Tandy up each mammoth hill, get back on at the top and then freewheel down and as far up the next hill as possible before dismounting and repeating the process. This lasted for over an hour. It was a straight road as far as the eye could see of continues rolling hills. The freewheeling down was I admit, a bit of a buzz. It was a 40 mph hang on for dear life situation whilst Tandy shook like a washing machine on an uneven floor. We hoped it wouldn't rattle itself apart mid flow.

We checked into a campsite by the river and pitched up next to a British family with their campervans, they were on their way back home. Impressed by our cycle stories and perhaps seeing how knackered we were, they promptly furnished us with cold beers. We slept well that night knowing we'd made it in time for the party and L was looking forward to showing off a few party tricks which he had up his sleeve..... 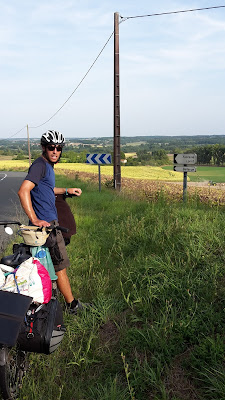