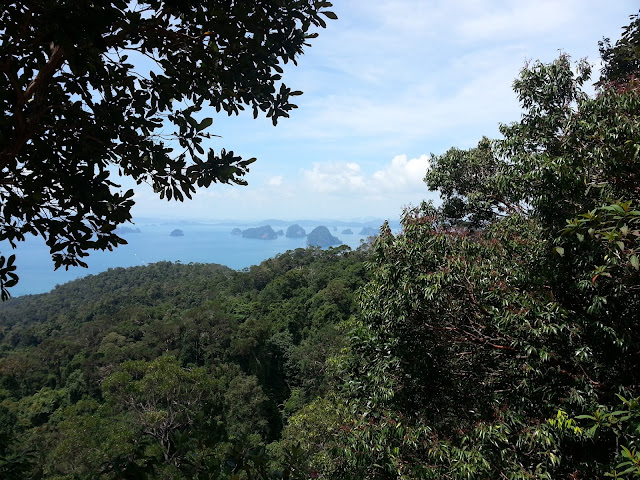 We left The Morning Minihouse having thought we'd interpreted with a fair amount of confidence, the enthusiastic instruction of Mr Oat and his recommendations for today. This would  appear to be true for the most part, as along the route we found and stopped off at a couple of his recommended beaches. The more vague part of Mr Oats's instruction was the road from Tubkaek beach to Tai Pom; non existent on google maps. Mr Oat seemed fairly confident in there being some sort of track joining up with a 'more main road' further up, but from what we could gather he didn't exactly know where it was. He suggested we just ask someone to point us in the right direction when we were leaving Tubkaek beach.... We must have left part of our adventurous spirits behind in the hotel room because we decided to double back and take the 'more main road' all the way to Tai Pom instead.  It turned out that Tai Pom (without stopping at the beaches) was an hour moped ride north of Ao Nang, however on anything able to achieve more than 28mph, it would most likely take around 30 minutes. Luckily we were in no rush, and once there enjoyed the relaxed walk through the mangroves and over the vivid waters on suspended platforms. Other than a Japanese bride and groom in full regalia tailed by a photographer and his poor assistant, who was dragging along various huge bags of equipment in the sweltering heat, we were the only tourists there. Handfuls of locals with kids were splashing around in an area designated for swimming. 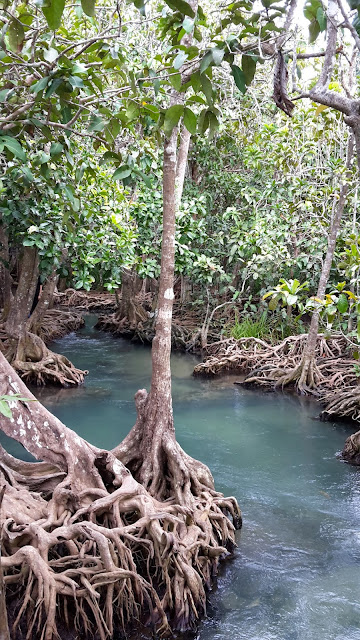 Neither of us had previously read or heard about the mountain walk Mr Oat was recommending for us the following day. From what we could gather, a walk up to the viewpoint was worth it for the panoramic views at the top. We took his word for it and headed off on the moped in the direction he was pointing in search of the start of the trail. When eventually the road ended, blocked by a wooden barrier adorning Thai writing, we figured this was where we needed to leave the moped and start the walk from. A lady sat under a banana leaf roof gestured we sign her book, so we did. It turned out to be a 'sign in, sign out' book for people walking the trail. Quite surprising for a country with slightly lax H&S I thought. It did make me wonder how difficult this 'walk' was going to turn out to be... 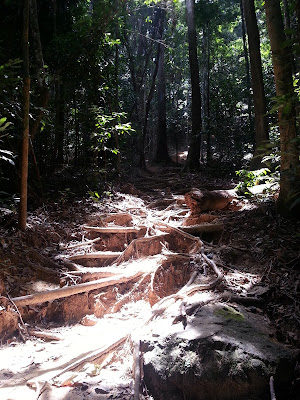 The canopy took direct sunlight out of the equation but despite this it was still so ridiculously hot and humid. It was a steep continuous climb, definitely less of a walk and more of a hike, which took us just over 2 hours. Our clothes held out about 20 minutes before becoming literally saturated. We stopped part way up to watch some monkeys playing in the trees just before an Australian couple passed us on their way down. They told us that as much as they'd love to say we were nearly there... they couldn't because we were absolutely no where near."... Incredibly motivational not!

Mr Oat had been right, the view from the top was worth the slightly uncomfortable hike up. We had 360 degree views over Thailand's Krabi provence and there was a good breeze which started to cool us down and dry us out. 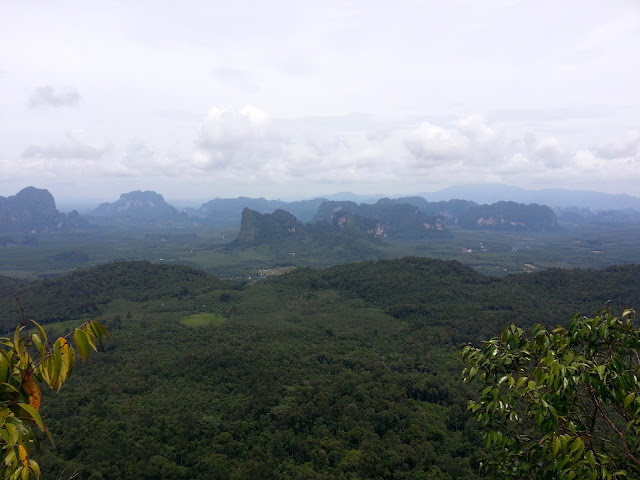 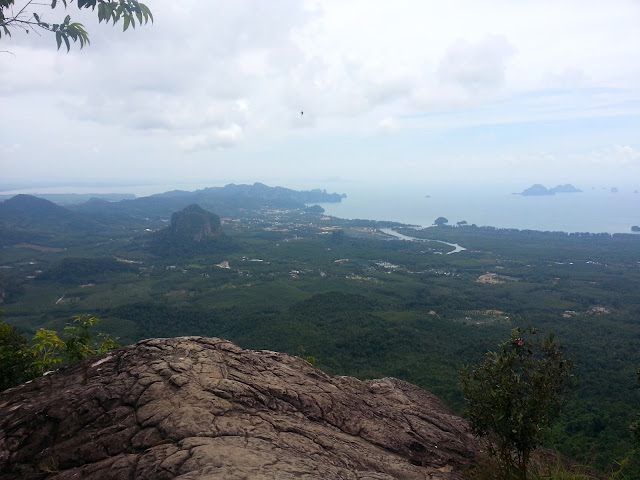 After consuming a lot of water on this hike L was keen to properly test out his (now fixed!) water-to-go bottle and so refilled it from a stream. On the journey out here I'd spent some time racking my brains thinking up possible fixes, using just what was available from our limited amount of worldly back packing processions. Settling on an idea I thought would work i'd removed a surplus metal acorn nut from a GoPro attachment, superglueing it in the place where the 'plastic nub' had snapped off. Personally I think it's an improvement! For one L now has a personalised water-to-go bottle very much in his style; tools, nuts and bolts, etc right up his street. Secondly you can gain more purchase pushing up the drinking straw using the nut because it's slightly bigger than the 'nub' was. 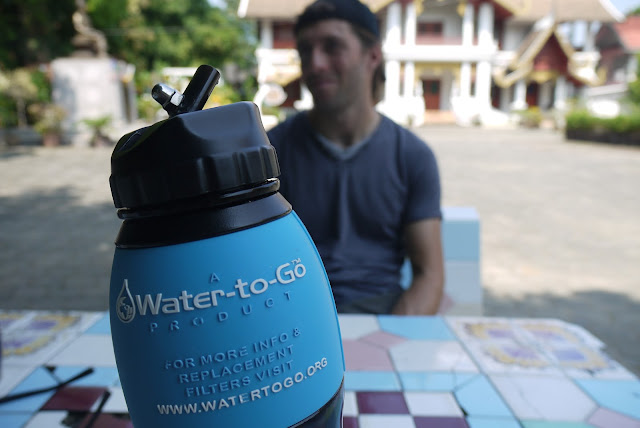 Just for fun myself and L made every night a challenge to find cheaper eats than the previous night. This wasn't too  difficult (with the exception of the overpriced vegan restaurant disaster). We'd started in a restaurant, probably aimed at tourists but highly recommended by Mr Oat, here I had the most amazing rice dish serviced in half a pineapple. Then we'd eaten at a traditional Thai restaurant, slightly cheaper than the previous night. This turned out to be the night where the food I thought I had ordered was actually something quite different. In brief, my ignorance had landed me with sweet and sour tentacles because I didn't realise that 'cuttlefish' wasn't actually a fish... Despite not being a sea food fan it did taste really good, L was impressed I'd actually eaten it and he too enjoyed his mystery seafood dish, which even with a vague menu translation was one of those just see-what-turns-up situations.
L's choice in a small beachfront eatery the following night was the cheapest eat so far. I think the rainbow coloured table cloths were the main convincing factor for his decision process. Not so much the lone chap sat playing his guitar in time to his backing tracks. Singing the likes of Johnny Cash with a Thai accent and a few of his own made up lyrics. I quite liked him...L no so much. 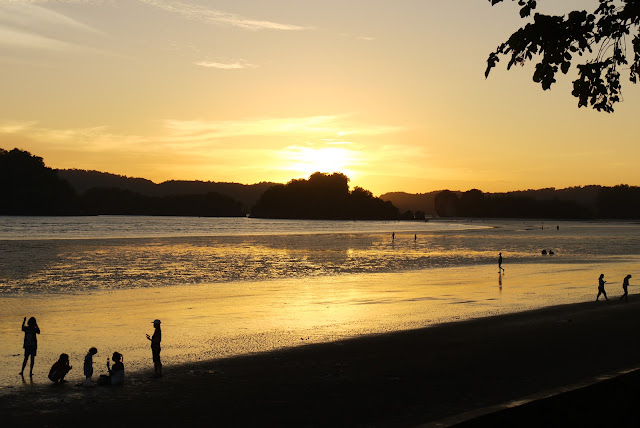