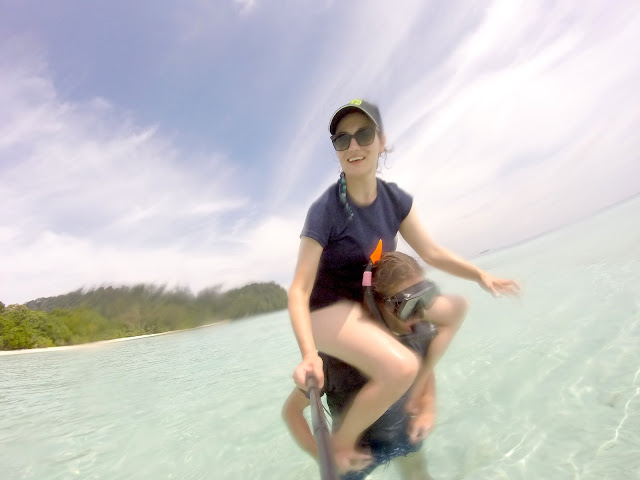 I'd thought my bartering had paid off until half way up the first hill when I realised just how much of a shit-machine this moped really was. It would be quicker to run up if it wasn't for the monkeys who seemed to only move out the way for the squealing engine. I'd seen the rental lady pick out a different set of keys after what I thought was some successful bartering on my part (£3.48 per day) but I now realise she'd just switched the keys for crapper motor. 90p filled the tank. It was hilariously slow and made the last moped we rented seem quite nippy, and that was saying something! We were now on Koh Lanta, an island a couple of hours further south of where we had been staying in Ao Nang. Koh Lanta boasts some beautiful beaches and islands to the south. After spending a few days using the shit-machine along with our 'space crown' helmets (not a brand I'd previously heard of) to explore different beaches, we went island hopping on what turned out to be the most incredible snorkelling trip. We successfully found Nemo, amongst a ton of other colourful fish one of which kept pecking at the GoPro which made for great footage. 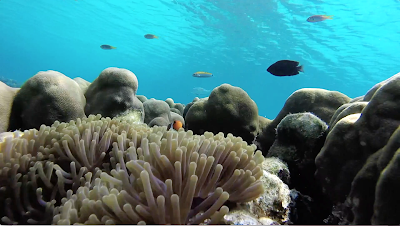 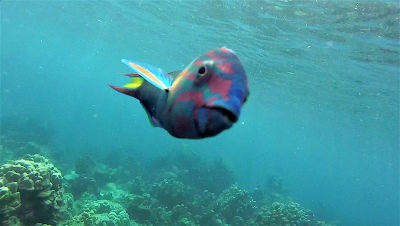 We'd booked a hotel about half way down the island so as to be best positioned for getting out and about. Our budget £7.30 a night room was half the price of the last place, so we splashed out and paid an extra 20p per night for a superior room, benefitting from a huge window overlooking the sea and giving us a picture framed sunset every night without fail. Breakfast at this place wasn't included so we were now eating out three times a day. This sounded somewhat extravagant, well at least we thought so ourselves, but the cost for eating out 3x a day was usually less than eating out once back in the UK. Some days we managed to stave off lunch...for anyone who doesn't know L, he could quite effortlessly be in the running for the worlds biggest eater, so this revelation will be somewhat shocking and utterly unbelievable to a lot of people. (You know who you are). 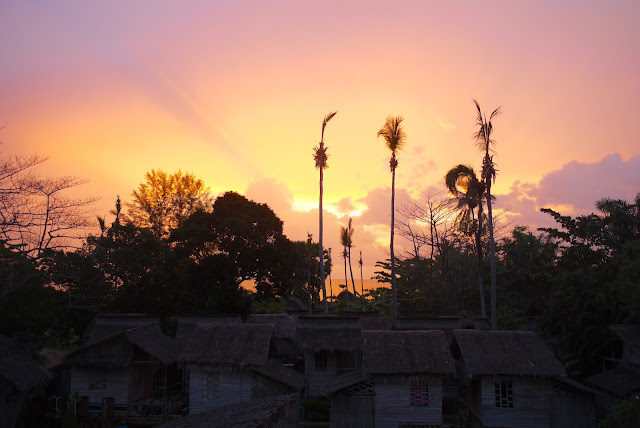 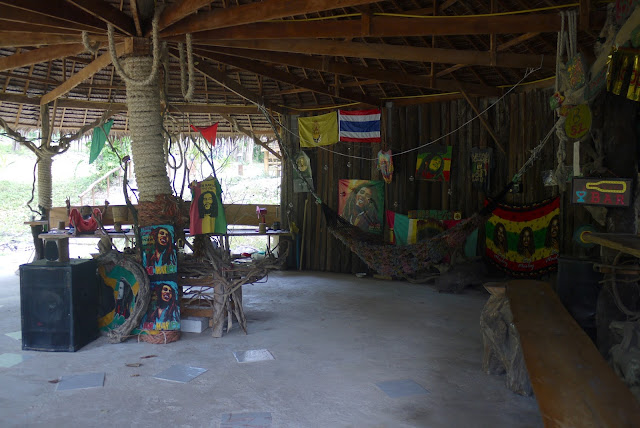 After food on our last night in Ko Lanta, Mr Bob Marley lookalike invited us next door to his impressive hand made, wooden framed bar/ grotto/ Bob Marley shrine. Bob Lanta as he fashions himself, with dreds down to his knees and an obligatory joint, didn't look a day over 40 despite being in late 50's. L and Myself put this down to his very 'relaxed' lifestyle. When there was no one in his bar he would sometimes help his friend out in the restaurant next door. This I thought would explain why my chicken rice had turned out to be prawn rice... Mr Bob Lanta had taken our order, it could also be because he struggled to balance his 'one leg' glasses (his own words) upon his nose. We decided to stay for a couple of beers and chat to Bob about his interesting bar. As curious customers began to trickle in, we were joined by a friendly Dutch couple who were our own age and equally amused watching Bob's reenactment of how he accidentally electrocuted himself 10 years ago. He still wore the scars. I could see how this could happen fairly easily in a country where health and safety is some what hit and miss. Only yesterday we had ridden under a chap fixing the electricity cables in the street. In his shorts, t-shirt and flip flops he stood at the top of his bamboo ladder, which was propped up against the electricity pole surrounded by a birds nest of black cables. He'd cut one of the cables down and it draped over to the other side of the road where it terminated into the rear of his pick up truck. The road wasn't closed and before we had chance to process we'd ridden straight underneath emerging at the other side bewildered about what we had just seen. 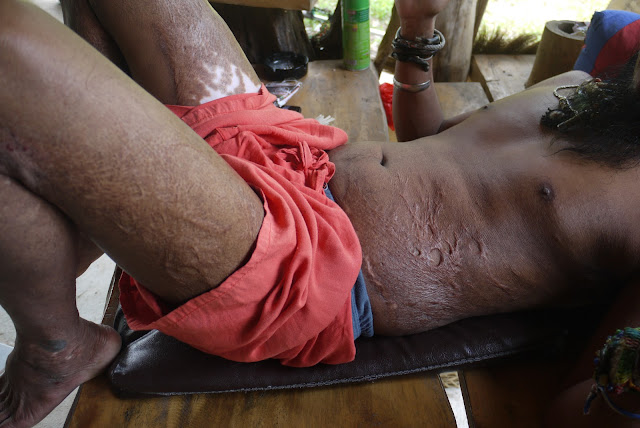 Just before we left Koh Lanta to return to Krabi airport for our onward flight to Chiang Mai, a group of young somethings turned up wanting to rent mopeds. In truth I wasn't sure of their nationality but they weren't Thai and there was a clear language barrier between them and the rental lady. I sat watching in amusement at what tuned out to be a complete whirlwind of a nightmare for the rental lady. Perhaps her commupance for previously renting us a useless machine but even so I felt slightly sorry for her. The unruly group of good for nothing's joked around, testing and changing their minds several times about which scooters took their fancy and how many they wanted to rent. There was no volume control, they were loud. Rental lady had started to put some fuel into a couple of the mopeds for them upon request by the girl who seemed to be the one in charge of the group. Some of the others had watched and taken a couple of glass bottles of fuel from the shelf themselves and started filling other mopeds. Rental lady was loosing track of how many glass bottles of fuel were being emptied into various machines, she was distracted by in-charge-girl's constant bartering on the price. One good-for-nothing threw his fag like a paper airplane, onto the floor. It landed a few meters ahead of his friend who continued to pour the last slurp of fuel from a glass bottle into a moped. I reckoned we were sat a safe distance from any potential explosion. Rental lady tried to gesture how to ride a moped, twist to go, brake to stop, an in depth 15 second training, but they were more interested in just setting off, Seconds later the whirlwind moved swiftly on.

We didn't yet  know it but Chiang Mai would have an epic surprise for us... 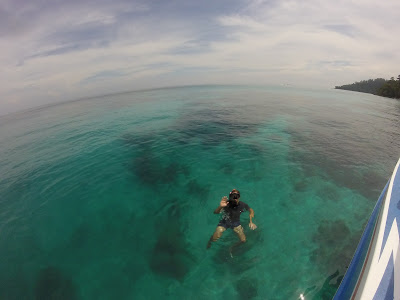 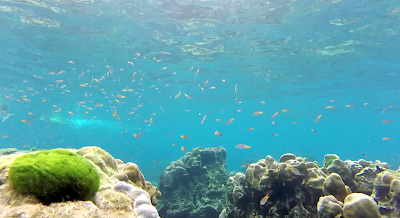 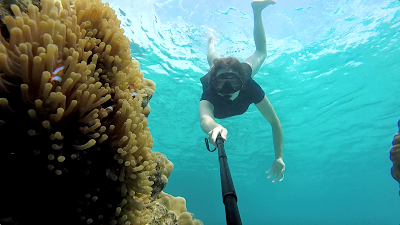 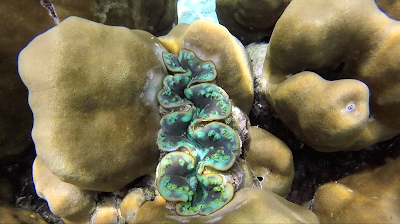 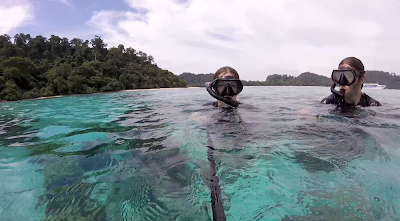 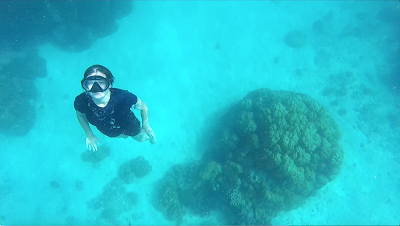 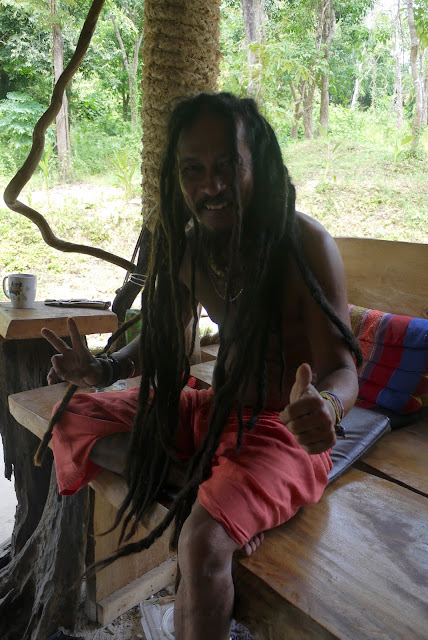