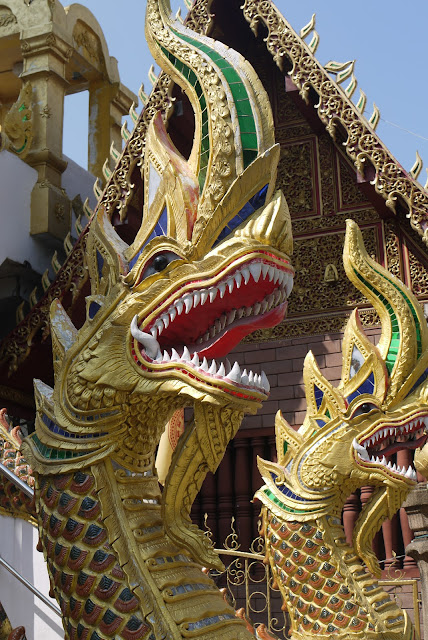 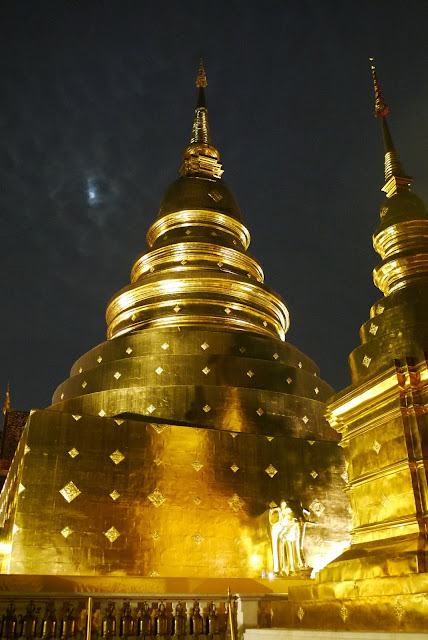 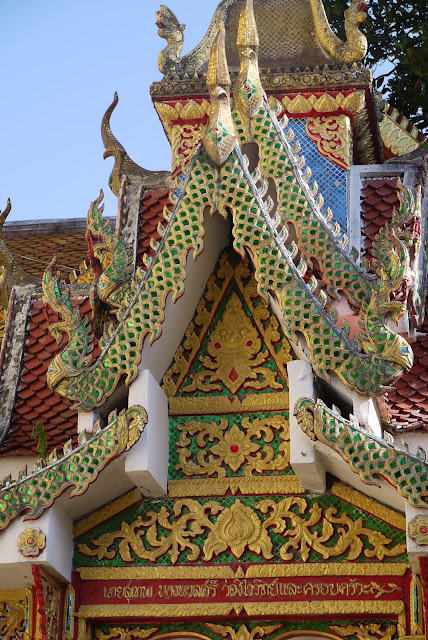 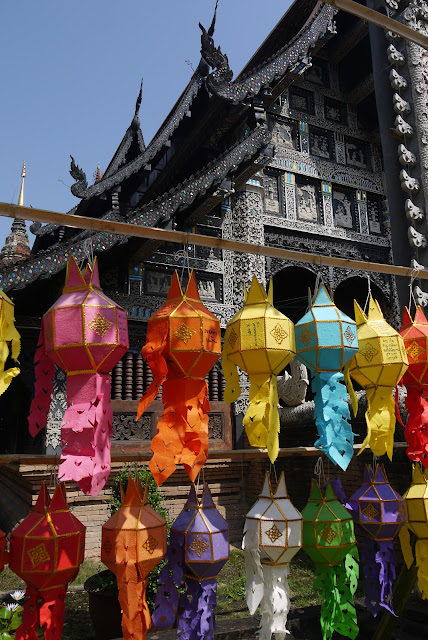 We just so happened to arrive in Chiang Mai in time for what many would say is the best Thai festival of the year. Admittedly no planning on our part, in fact a with a Mini Mouse note pad told us about it, we were completely ignorant, it was a total coincidence and amazing surprise. The 3rd November was a full moon and the sky was twinkling with tens of thousands of sky lanterns. The city streets were lined with strings of colourful lanterns hanging from trees and poles and the monks had adorned their temples with similar. Countless rows of candles lined the pavements. I had to keep checking the bottom of my trousers legs as we walked, they were a little too long and I was conscious how easy it would be to accidentally walk over a candle and set my ankles on fire. Luckily for me this didn't happen but sadly a few other folk didn't have such a drama free night. Ambulances were working overtime, we saw a few people dragged onto stretchers, hurled above crowds and loaded into the back of a pick up trucks. As amazing as it was to watch a continuous stream of sky lanterns drifting into the night sky until the early hours, it wasn't great for the environment and it was a such a hazardous affair! Countless sky lanterns got snagged on electricity lines, traffic lights and trees, others simply failed to launch and floated back down silently upon the unsuspecting crowd. One chap did a great job whacking away a sky lantern with his shopping bags which was about to land on another mans head! The other issue with compacted crowds setting off sky lanterns seemed to be the occasional dripping of enflamed fuel onto those below!
We eventually found a good spot to watch the festival unfold, across a road and tucked under a slight roof over hang. 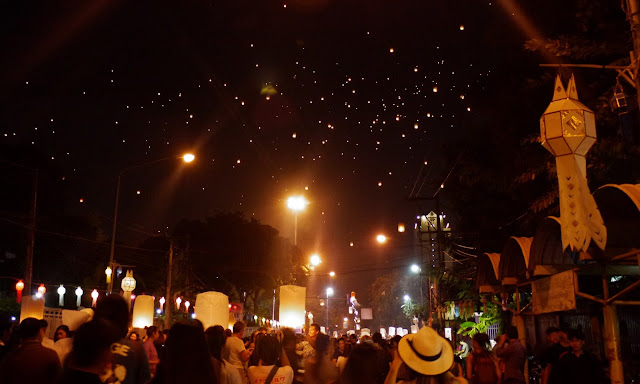 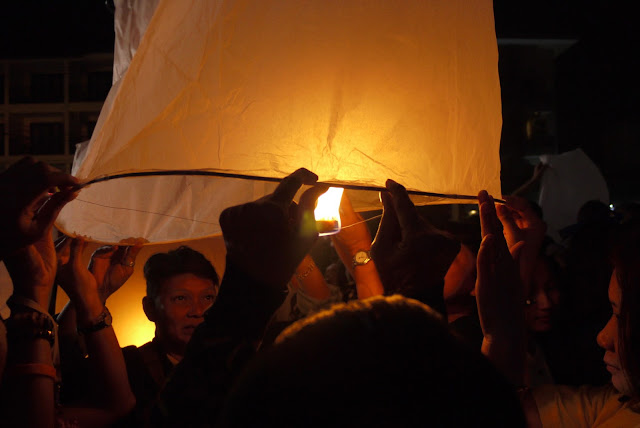 Later we found ourselves down by the banks of the river to float our Krathong, another festival tradition. According to the lady at the hotel who'd instructed us on how to make it, releasing the Krathong was supposed to symbolise the floating away of all your problems and bad energy. So there we were, both kneeling down, lowering it into the water together whilst surrounded by others doing the same. We watched as our Krathong, along with our problems and bad energy, drifted a few metres down the river... straight into the hands of a woman stood waist high in the water! Half hidden by the reeds she was sifting through the passing Krathongs, adding some to her little stock pile on the grass. I couldn't work out her criteria but whatever it was it seemed ours must've made the cut. L and I certainly weren't having that! We needed all of our bad energy to float further away than just 2 meters, so the both of us started shouting at her. It seemed to work, she looked up and set our Krathong back into the water, apologising with her hands held together. 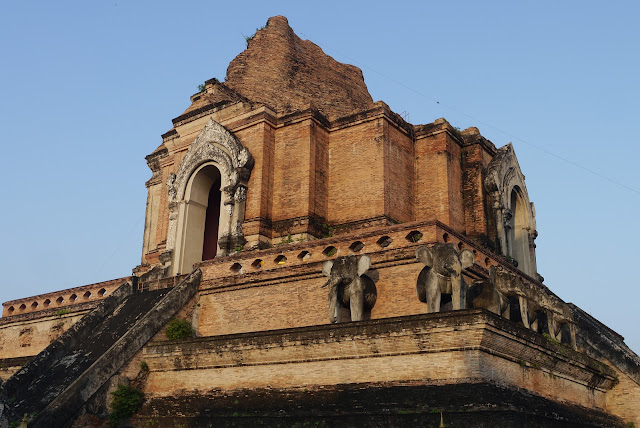 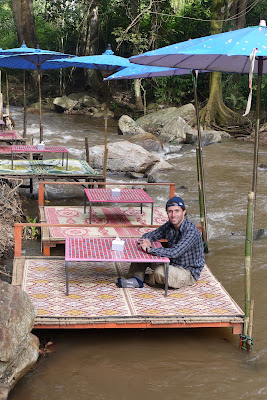 Chiang Mai is an amazing city with so much to see and do, we spent 7 nights here, split between 2 hotels, the first manned by a receptionist who only seemed able to 'shuffle' everywhere and the second which had a distinct 1950's hospital feel. I'm sure I read somewhere that there's around 300 temples within the city! The old part of the city sits within a square wall and the crazy clockwise and anti-clockwise roads hug the city wall all the way round. As we discovered, there is just as much to do outside the city as there is within it. Once again we employed the services of twist and go scooter. (Note: it was now grating on L that the Thai people refer to this mode of transport as a motorbike.) Over the next few days we climbed waterfalls, shopped at night bazaars, dined riverside in the most literal sense (see photo), visited the Queen's botanical gardens and paid extra for it for being foreign, (this was becoming the norm, along with being pulled over by the police for 'license check'.)

We also visited a few villages where we could observe traditional crafts being practiced. From traditional bamboo parasols to beautiful hand woven scarves. L was particularly interested in their timber houses which offered an insight into traditional construction techniques, as well as the versatility of bamboo and banana leaves. Quite the contrast to what we perceive a house to be constructed of, based on 21st century western living. Through the open doors of a few of the houses, could be seen an open fire, with the smoke rising and finding it’s escape through the leafy roof. 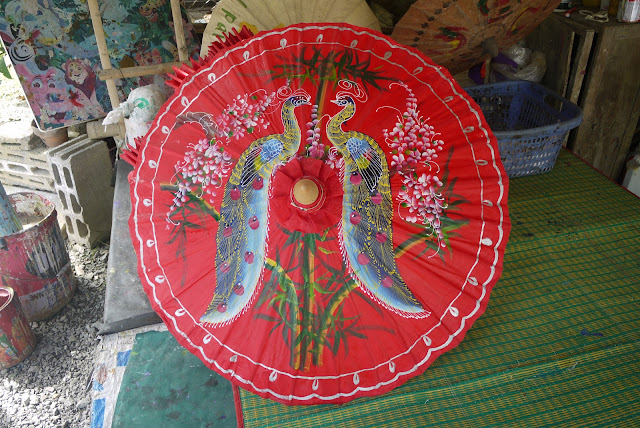 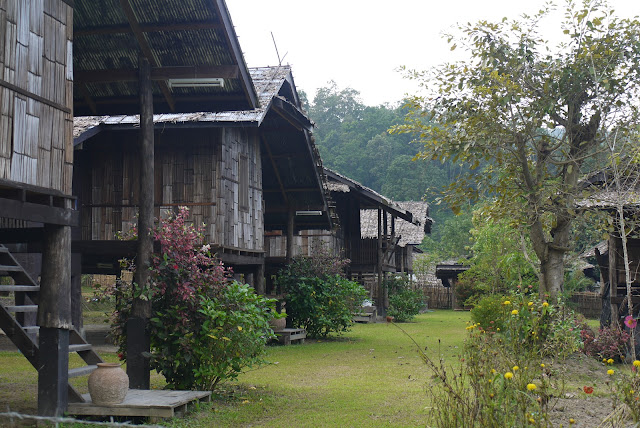 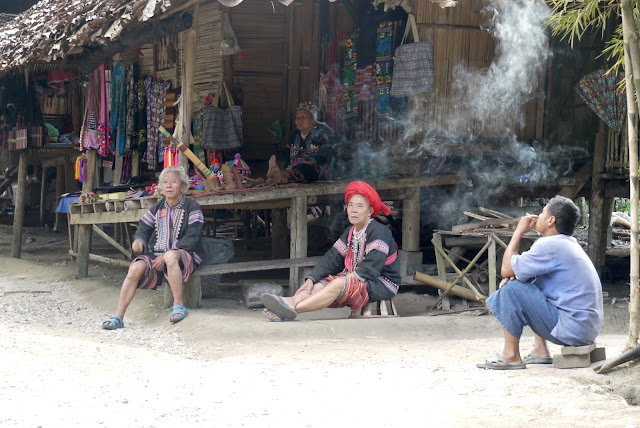 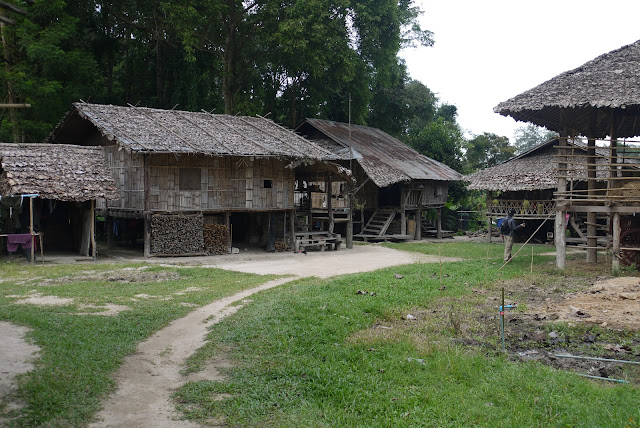 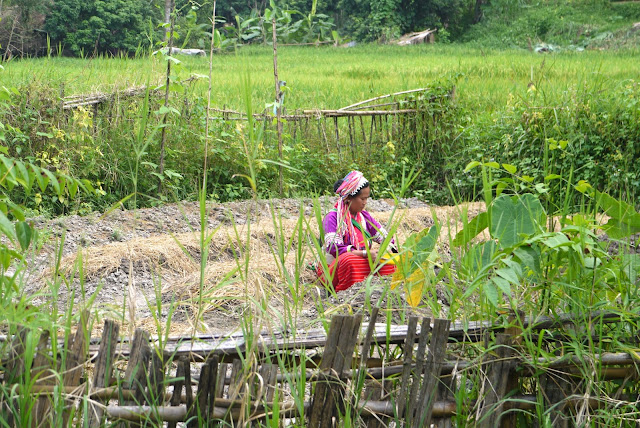 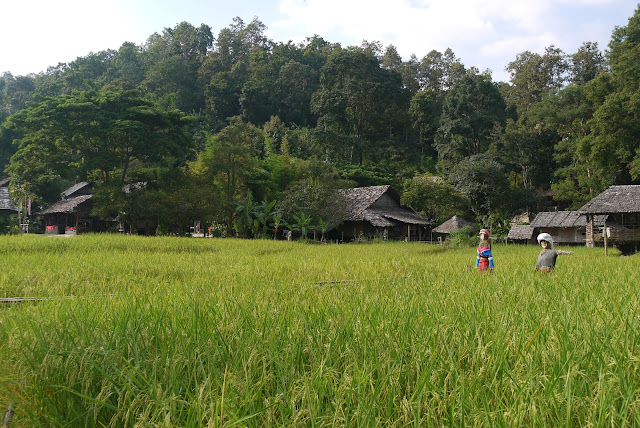 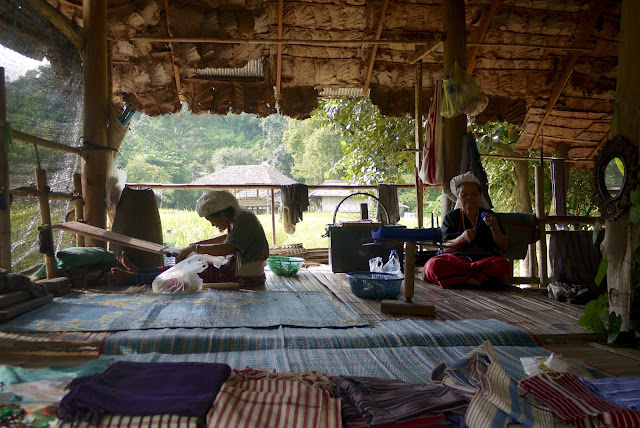 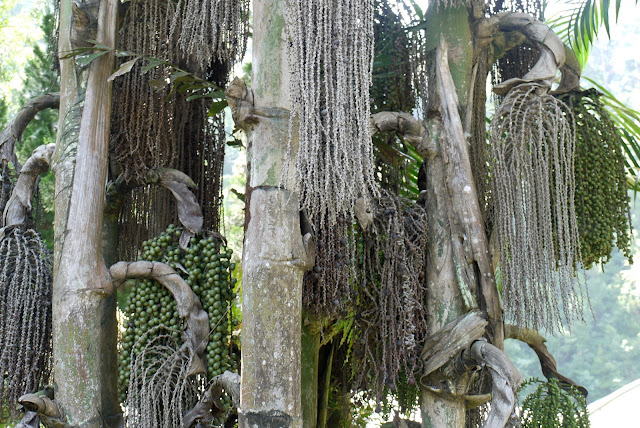 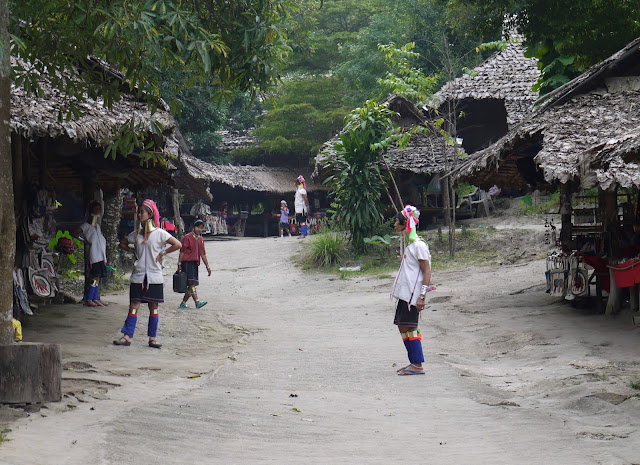 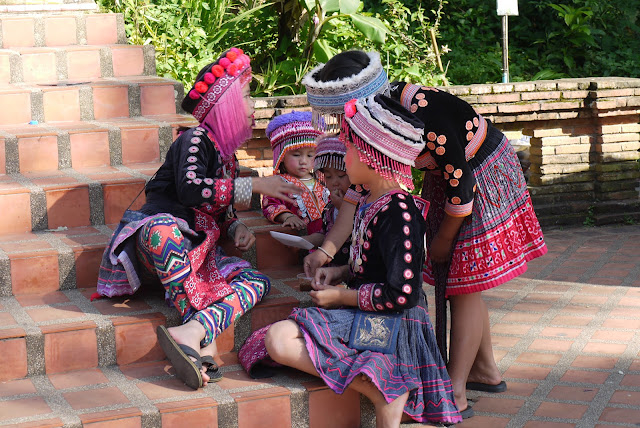 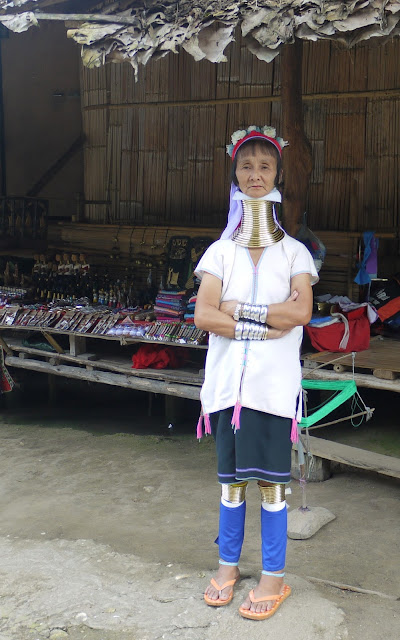 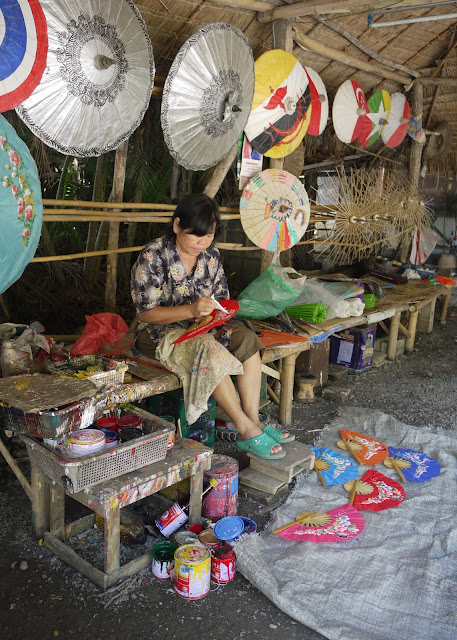 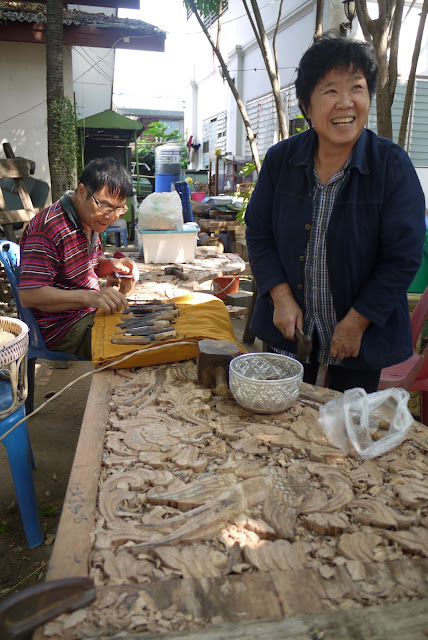 The tarmac road we were on to access one village ended quite abruptly. What continued, was a track the likes of which we have ridden on before, but only on enduro bikes, certainly not on a 125 twist and go! One thing that we have learned from our time here so far however, is that there is no need to get hung up worrying about the need for terrain specific vehicles. Having whees and an engine is more than ample criteria for wherever you want to go. We continued on, through ruts, potholes, deep gravel, steep rocky inclines and descents.
Once we reached the village, we were met by the usual friendly smiles. One lady selling coffee from a little shop in the front of her house, caught our attention. L having been turned into a bit of a coffee snob by his brother N was keen to commission her services. Given the go ahead, she eagerly started to grind the beans. I sat at a table at this point, while L observed the process. I noticed L was giving me some wide eyed looks, as if to indicate there may be something concerning him. There was...
After we left the village he explained in great detail, the lady's process for making his coffee. It went something like this: First she put a kettle of water on a gas ring, she continued by swilling out a cafetiere in a washing up bowl of spurious brown water. Then she added the coffee grounds to cafetiere. She poured the not quite boiled water from the kettle into the cafetiere. The contents was then were poured into a sauce pan and placed back on to the gas ring for approx 30 seconds. After which she poured the contents back into the cafetiere and allowed it to sit for another 30 seconds. After plunging the cafetiere she brought out a mug from a cupboard, this too having being quickly swilled around in the suspect water of the washing up bowl. The lady then introduced another piece of apparatus, this, L could only describe as looking like and old grey/ brown crusty sock with a wire handle. The coffee was poured through the sock and into the cup. When all coffee was poured from the cafetiere, she then removed the plunger, added more water from the not quite boiled kettle, re plunged, and toped up the mug, omitting the sock from this second round..!!!
Thankfully, L did not become ill from this experience, and did enjoy the taste of the coffee despite the visuals of its production rendered in is mind as he drunk it. 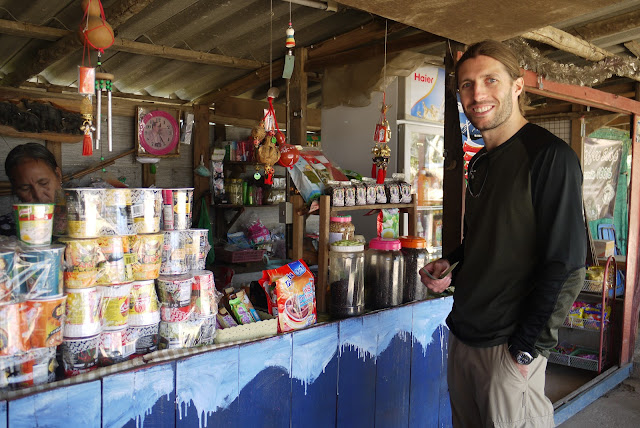 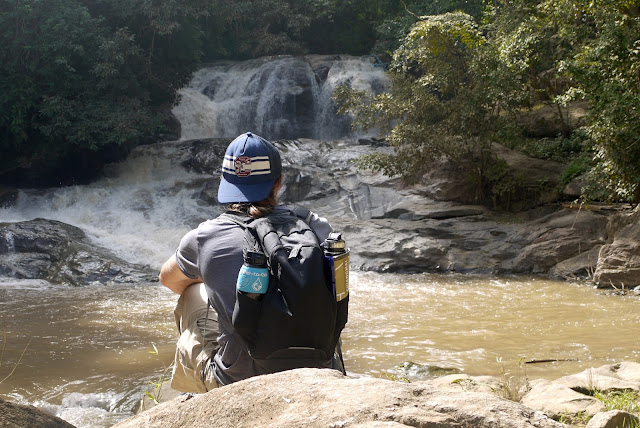