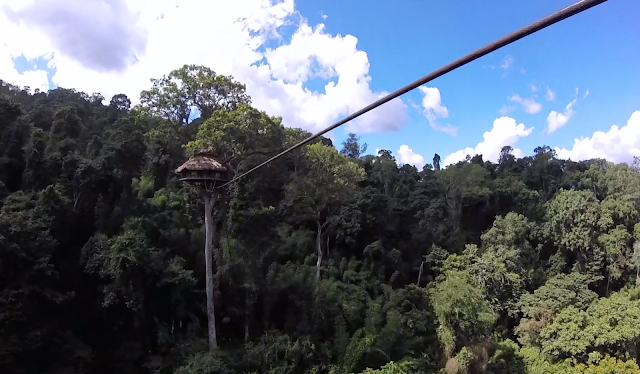 Arriving in Huay Xai, a small town on the Laos side of the Thai / Laos border meant we were now only one sleep from a part of our trip we'd been super super excited about since leaving the U.K. The Gibbon Experience! Okay so it is ridiculously expensive (€295 each) but it is tipped as a must do for any outdoorsy, thrill seeking, nature lover who is moderately fit and wants to live that childhood fantasy of sleeping in tree houses hundreds of feet up in the jungle canopy...and zip lining between them on some of the worlds longest and highest cables. So if in Laos, do not miss booking yourself onto 1 of their 3 trip options. I had booked both L and I on the 'classic tour'. L didn't really know what exactly it was I'd booked us on, but being told we would be in the jungle for 2 nights 3 days having a blast doing the above, along with the possibility of spotting gibbons, was just enough to keep him from getting edgy about the price...well sort of...let's not forget he's a Yorkshireman after all. 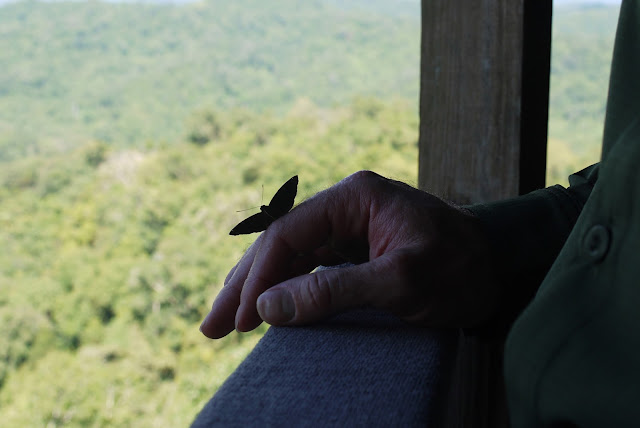 For the next few days we would both be living out of one 20L day pack which would be 'zip-splittingly' rammed. Our first aid kid, solar panel charger and water flasks took up at least 50% of the space alone. Our group was divided between two Toyota pickups, that would drive us 2.5 hours into Nam Kan National Park. L and I took up positions on the bench seats in the back, along with a German couple. When I say back, I mean the load area of the pick up. There are masses of pickups out here that have aftermarket 'people cages' haphazardly welded onto the back with bench seats that face side on and no seat belts. This truck was the older of the two but lead our convoy on the melted tarmac mountain road. After an hour of dusty, noisy, travel the pickup slowed, appearing to struggle up a hill, the other truck following in convoy overtook us and continued on.
There was a further couple of minutes of repetitive thudding as we limped up to the crest of the hill with a now flat-as-a-pancake rear tyre, it was almost completely off. We all bailed out. L was quick to scout the underside of the truck for the spare. There wasn't one. Nor was there one on the roof rack. The other pickup came back, offloaded a spare tyre and a jack and set off again.

What followed was a concise guide on how NOT to change a wheel...
The bottle jack they had was too big to fit directly under the axel so they first drove the truck forward a foot, positioning a rock under the flat tyre in order to get some more ground clearance. With the flat removed, the truck somehow managed to lurch forward fall off the jack and crash down onto the road with the most almighty crunch, leaving it with the brake drum now on the tarmac. Luckily neither man was underneath when this happened! Unbelievably after jacking the truck back up, they then balanced the truck on a wheel brace so they could remove the jack and fit a piece of wood (found in a bush) under the jack to get the lift needed to fit the borrowed spare wheel. Now understand that L is very much hands on when it comes to car mechanics and would usually be diving straight in, it would take something quite extreme for him to not even offer to lend a hand... Internally cringing L continued to watch what unfolded in front of us. The borrowed spare wheel was a road tyre and not an off-road mud terrain like the others, in fact it didn't look to even be the same diameter, never the less, this was as good as it was getting. 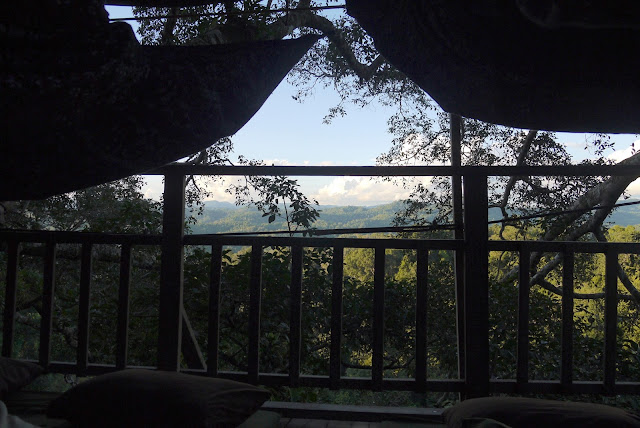 We all resumed our positions and after another half hour of road driving, the truck turned off down a steep track and before I knew it we were crossing a river with water up to the bonnet. We had an hour of being thrown around as the driver sped over potholes, ruts, branches on a dusty mountain track. Worryingly, the driver didn't use the low box for all of these and instead continued down at the same fast pace while using the brakes to try and scrub off some speed. Thankfully the most part the dirt track was dry, though some of the steep descents were very muddy. We eventually arrived at a remote village which was as far as the trucks could go. From this point we crossed a stream and started our walk up steep jungle paths for 1H30 until we reached a clearing where we were fitted with harnesses. 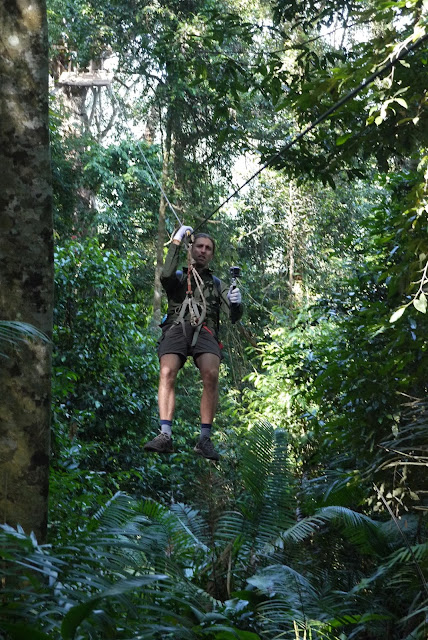 While everybody was removing their shoes and socks to cross the shallow but wide stream, L was having a secret gleeful moment. He was wearing for the first time, his Sealskin socks which he had got specially for this trip. At the time of purchase, myself and my mum had somewhat laughed at this decision of L's. Firstly I hadn't previously heard of waterproof socks so the concept seemed amusing but secondly I thought they would be far too hot to wear in S.E Asia. He was however, able to cross with his socks on, and amazingly keep his feet dry!
Our group who all turned out to be great company comprised of 3 chaps; from Aus, Alaska and India and 3 ladies; from Birmingham, the US and Canada. We were all in our mid to late twenties apart from our Indian companion who was a trifle older but with the heart and humour of a twenty something. 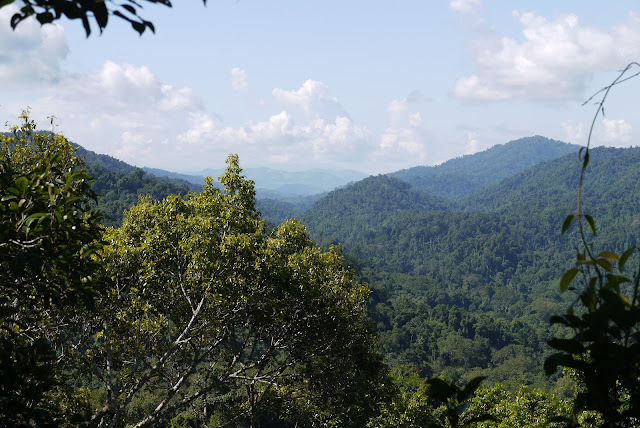 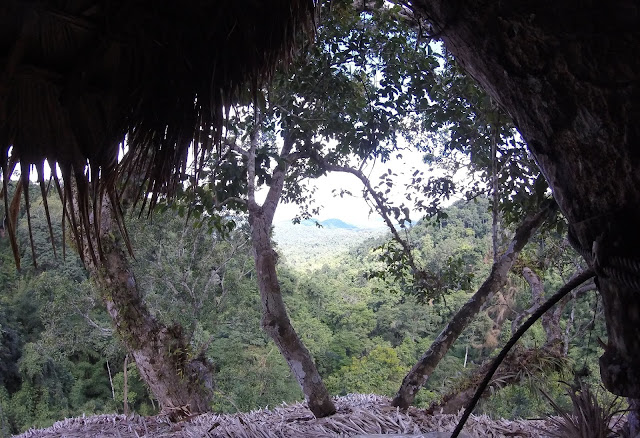 A couple more hours of walking and then zip lines and we had reached our home for the next two nights. As everything that was needed in the treehouse had to be brought in by zip line this meant that come meal times, either the guides or the young cook girls could be seen clinging onto bags and metal food containers as they zipped over to our treehouse. After zipping away following their food delivery in the evenings our group of 8 would be left alone in the treehouse, which was quite a surreal  feeling, the guides would then zip in around 8am in the morning with breakfast.
I also have to talk about the bathroom... loo with a view! The bathroom was on a slightly lower level, there was a typical asian porcelain squat toilet (they probably have a name but I have no idea what and its not something I want to start googling!) and with the floor being just wooden spaced lats, the water from the shower fell down to the forest floor below.
The jungle is a very loud place at night and when the sun began to set all the bugs and creepy crawlies started to come out. Sleeping would prove fine as each couple had a square fabric net suspended from the ceiling over a mattress on the floor. But I won't lie, we did have a couple of spider incidents. The first being when a fairly large spider descended quickly from the roof stopping right in-between two peoples heads. Being the only one to see it I calmly raised the alarm, but these  two people got up so fast from their chairs they almost fell out of the treehouse. The second spider was about the size of my hand and had positioned himself on the roof above our sleeping area, I was absolutely dreading him falling onto our net during the night... 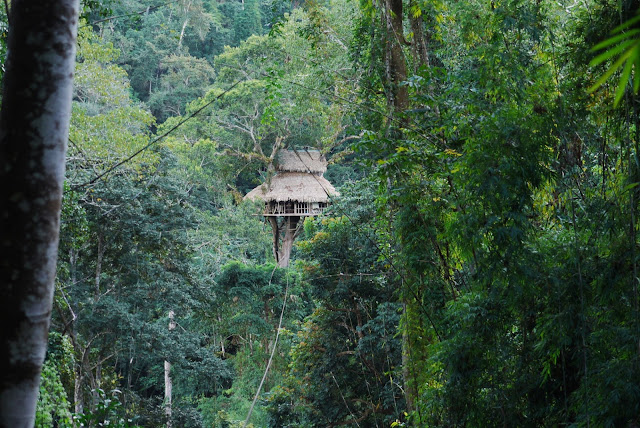 On our second day we were out on zip lines and hiking the trails. Being in a valley we were zipping from one side to the other, making our way down the valley and taking a look at the other tree houses along the way. Views from the zippiness were incredible. The longest of the lines was 500m though all of them were equally epic. On our stop off at treehouse 7 we were fortunate to see a small family of gibbons. We watched them swing from tree to tree and eat fruit. One mother had a small baby clinging to her front, super cute. What was just as good, was that treehouse 7 was the other group's treehouse...and they were out. They didn't see any gibbons for the duration of the stay! 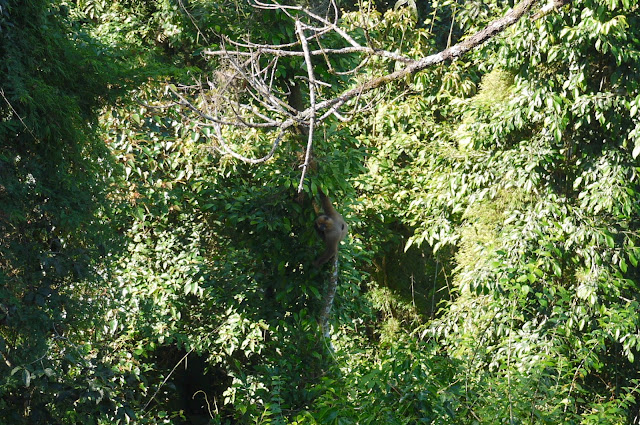 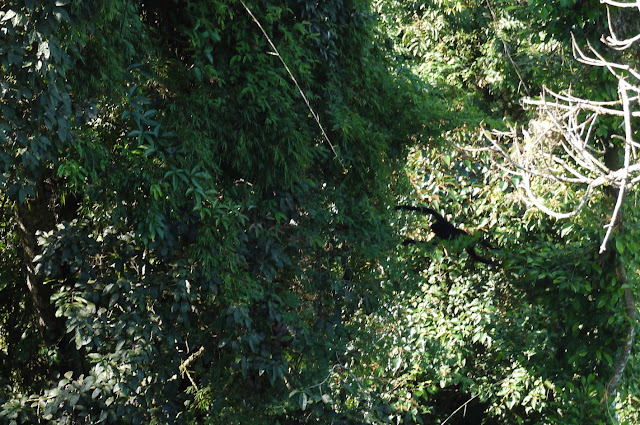 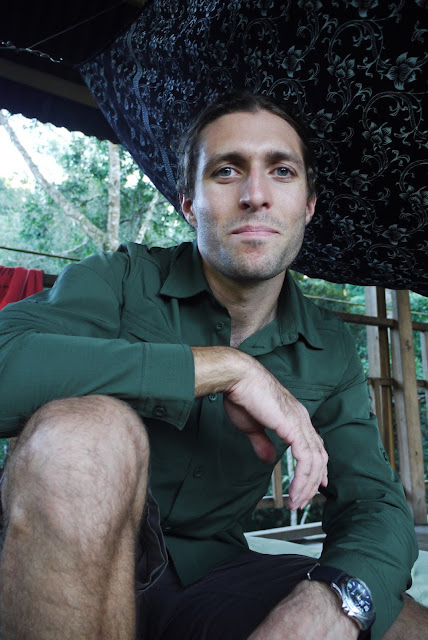