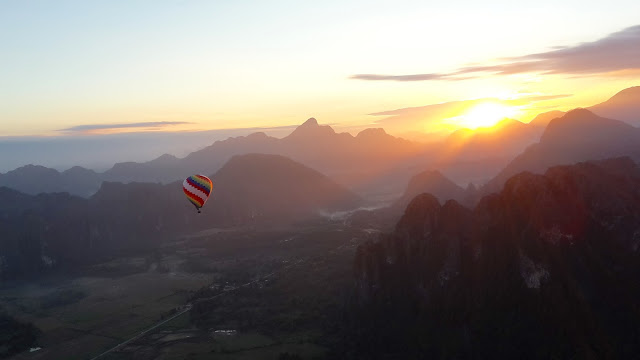 Having decided to travel onward from Vang Vieng, we booked onto a mini van which would take us to Vientiane (the capitol of Laos.) Our driver would apparently be taking us via the “new road” cutting our journey time down from 7 hours to 4 but frustratingly we first spent an hour driving around Luang Prabang picking up people before finally setting off. It was now just after 4:30pm. According to L the journey started with amazing views of the dramatic mountainous landscape, unfortunately I'd missed such views because instead I'd been watching the inside of my eyelids. It was around 6pm when we lost the light and continued to climb up the mountains in the dark. There was a roadside stop for all the men on the bus to hop out and pee up against a hedge, luckily I wasn't desperate.

We were very high up on our mountain road when out of no where seriously thick fog and terential rain set in. A handful of minutes later the minivan came to a complete stop in a queue of traffic. Our blue dot on google maps was indicating that the tightest hairpin bend of the journey was just a few hundred meters ahead and after 10 minutes of waiting, all the while being battered by wind and rain, L and I started to wonder if there had been some horrific accident on the bend. We waited some more and our driver attempted to apply the hand brake, sadly this was unsuccessful in holding the minivan stationary on what was a steep downhill section we were queued on. He quickly returned to keeping his foot depressed on the brake pedal. In the heavy rain the driver from the mini van in front (one with a functioning hand brake) went to see what the hold up was. Upon his return we learned that a sleeper bus travelling in the opposite direction was stuck on the bend! A further 40 minutes passed before the queue started to slowly trickle forward. I was slightly concerned by this point for the mini van brakes, after depressing them for so long the driver continued to go heavy on them instead of using his gears to hold us back as we descended down the mountain, still unable to see more than 2 metres in front of us.

Soon after passing the stranded bus the tarmac on the mountain road appeared to end, or we were driving over the result of a landslide (we weren't sure) but we had read they were a common occurrence in this area. The English guy sat in front of us overheard our landslide comment, replying with “O god, I wish I hadn’t heard that, I best text my mum!”  Clearly we were not the only ones a bricking it with what was turning out to be a bit of an eerie white knuckle ride. The thick fog and rain continued until we made it to the low lands. We pulled into a road side cafe for a toilet stop, where the driver confidently told us all “10 minutes”. Upon our return from the toilets however, we saw him sat down having what looked like a three course meal! 40 minutes later we set off and  eventually arrived into Vang Vieng over 2 hours late. 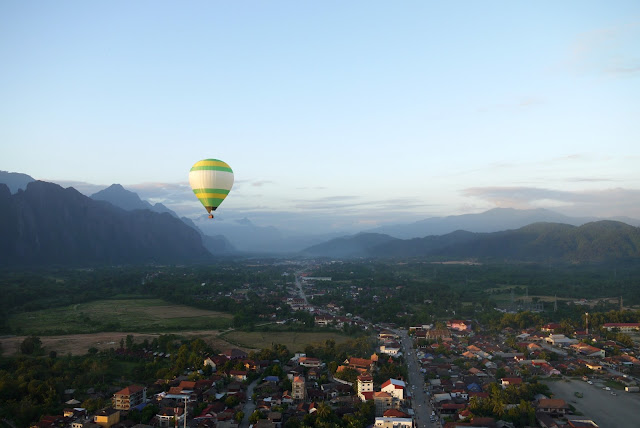 I had been under the impression that hot air ballooning was supposed to be relaxing, but crash landing into someone's back garden ontop of a pile of felled tree trunks preceded with getting entwined in tree tops and almost setting them on fire, would prove otherwise. Upon landing I'd decided that this would be the first and the last time I would pay to float under a piece of cloth supported by hot air and have absolutely no control of. It was unfortunate that ours happened to be piloted by an imbecile, who despite having an altitude meter in his hand, was unable to correctly judge when to add more hot air so as to avoid crashing into the tree tops. It turns out you do not need to be an 'expert' to judge the latter; both L and myself were equally aware he'd left it too late to start adding hot air and I imagine others in the basket had twigged this too. Que that sinking feeling you get when you know you've just passed that critical point of 'no return...' It's not the best when even the pilot can be heard muttering 'oh shit oh shit' under his breath.

What's hilarious is the whole thing couldn't have been more ironic because both L and myself should have gone up in the first balloon which had no such dramas. It had a bigger basket but because 'in my opinion' they'd packed too many people in and because this basket didn't have a fire extinguisher on board, I'd refused, gesturing to the guy that we'd go up in the second balloon instead. It wasn't until the first balloon floated up and the second began being inflated, that I realised balloon 2 was actually a lot older than 'brand spanking new looking' balloon 1. Perhaps balloon 2 was the pilot training balloon. The fabric was slightly tattered, a few taped up holes were scattered here and there. But I consoled myself with the fact that ours was the one with the fire extinguisher on board, and there was what I deemed the right amount of people in this basket, it didn't look overloaded.
If only we'd gone up in balloon 1... 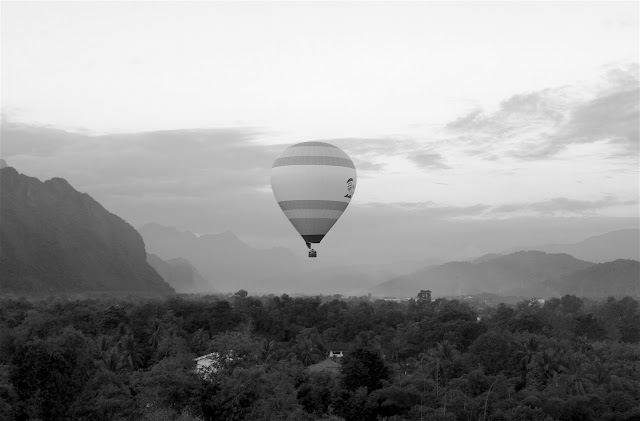 L on the other hand found the whole experience thrilling but did admit later to being slightly concerned at the potential 30ft bail out height when we crashed in to the tree tops. Luckily a lot of the canopy was bamboo which snapped and bent out the way as the basket made contact.
I can't deny that watching the sun set behind the mountains was breathtaking and the scenery was amazing and for the most part, say the first 3/4s it was super exciting but equally the surreal feeling of silently ascending to dizzying heights of over 700 meters, was I found, slightly stomach churning. Especially as all I could think about was the basket floor giving way and the long fall back to earth. 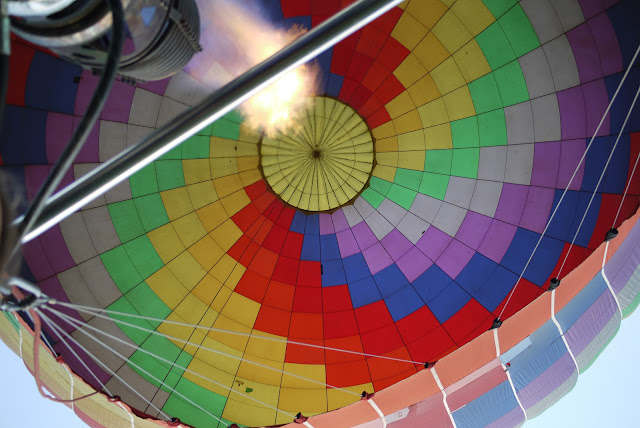 Tubing the next day would prove less eventful but great fun. (More irony) because I'm sure over the years there have been more injuries and deaths from tubing in Vang Vieng alone than worldwide involving hot air balloons. Following international pressure after the deaths of 2 Aussies within a single week, the Laos government moved in, shut down a lot of the river side bars, removed the 'death slides' and created a load of regulations for the few bars continuing to operate. It's calmed down a lot since, no longer 400 people bobbing down the river at any one time on huge inner tubes, getting pulled into riverside bars every 5 minutes along their journey for round after round of drinks.
Being the sensible pair that we are, we decided to forgo the midday binge drinking and just enjoy the tubing for what it was, the ultimate lazy river. So there we were relaxing in our inner tubes under the warmth of the sun allowing the river the carry us downstream. What a great way to spend a few hours. Disappointedly no photos or footage as I forgot to take the GoPro.

Vang Vieng is very much a tourist party town. You won't find traditional Laos culture here, sure there's still Laos restaurants but equally there's a lot serving western food which I must admit for a couple of days was light relief, curing my cravings for pastries, pizza, pasta, burger and chips. It's a great place for hiking, exploring caves and waterfalls or for renting a bicycle / moped and heading out into the hills, the scenery is immense but our time in Vang Vieng had come to an end and we were geared up to brave another mini van trip. Which would you believe, turned out to be just as nail biting  as the last one. 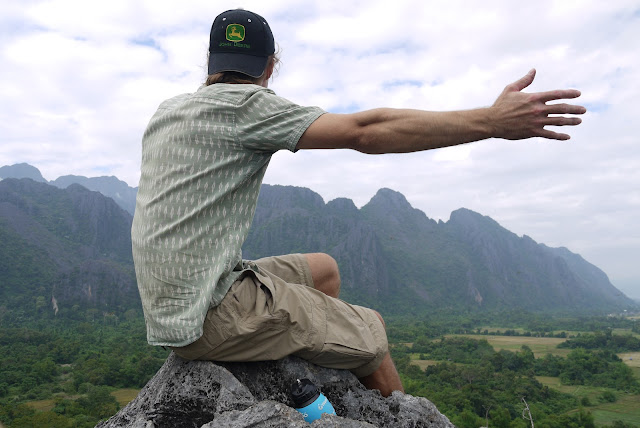 Ash Green said…
Thanks for such a nice content. Apppreciate it :)
Cheers
If anyone interested similar one's have a look here themotorbiker thanks
5 October 2019 at 20:45