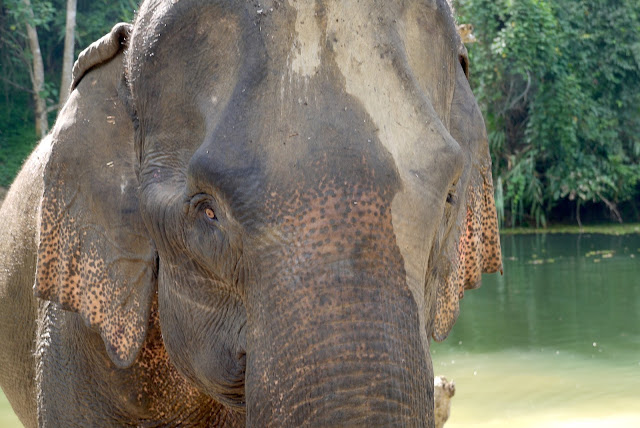 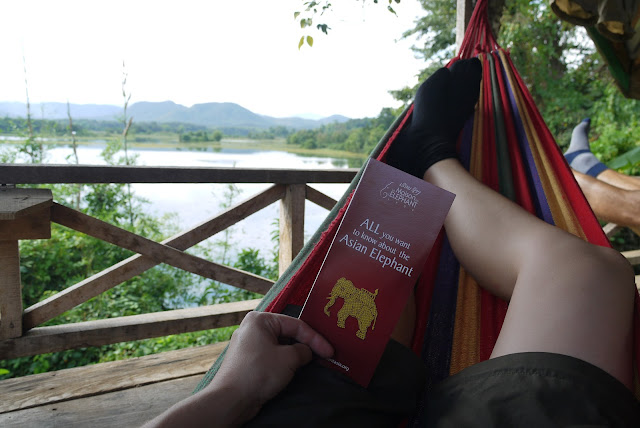 Never in the entirety of his life back in the U.K had L (or myself for that matter) forgotten to retrieve a bank card from an ATM...until now. In a country with a cash economy, this could prove quite problematic especially as this was the sole account we used to withdraw the cash from. On the plus side we had just maxed out and withdrawn 1.52 million Laos kip, (which L didn't forget to retrieve from the ATM) so we had some cash to be going on with, it wasn't dire straits just yet.
Returning to said ATM several hours later, confirmed the card was no longer there. We thought that with any luck the machine would have eaten it, instead of it ending up in someone else's pocket. We were relieved after a phone conversation between our guesthouse owner and the bank confirmed this. L was told to present himself at the bank tomorrow morning at 9am, so we held off cancelling the card. Guesthouse owner kindly took L on the back of his moped into town. Stood outside the bank L was quite surprised at another chap also stood outside the bank, who was wearing a denim jacket, beige joggers, flip flops and cradling a semi automatic. It wasn't clear to L if this guy was about to hold up the bank or if he actually worked there as some sort of security. L had paused a few seconds to process the situation but the chap enthusiastically gestured L towards the bank with his gun, it would appear he was security. Amazingly after what tuned out to only be a minor inconvenience he managed to retrieve the card, which was useful because after paying for a few extra nights accommodation, some food and some fun stuff for us to do, we were almost through that 1.52Mil! 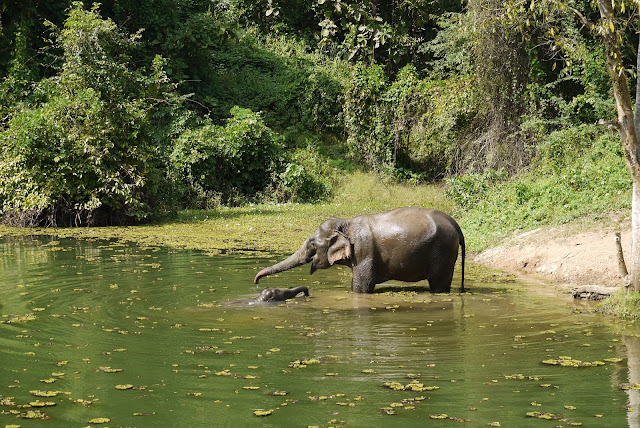 I must admit I hadn't been too fussed about doing any elephant involved activities whilst in Thailand or Laos up until now. A lot of places have stopped doing elephant rides and now focus on tourists just seeing the elephants instead because people have become more aware as to the conditions the elephants were kept at these places. That's not to say every elephant sanctuary now is in fact a 'sanctuary' for the elephants as some are still more of a show for tourists, there's very few 'good ones'. One sanctuary in Laos did however catch our attention. ECC: The Elephant Conservation Centre. Where after a couple of hours drive into the countryside and a short boat trip later (which had the feeling of approaching a lost world /jurasic park) you could stay in one of their eco lodges and get to spend a few days observing some of the elephants the ECC have given a home to, after what was for most, a lifetime of backbreaking logging. The ECC is surrounded by forest and at night this is where the elephants live. During the day they can roam freely in vast open and forested areas but equally there are some tasks the elephants need to do for their own benefit. For these the mahouts lead the elephants to various areas of the sanctuary. The elephants here are not wild, some have spent 40 years with a chain around their leg being controlled by a mahout for logging, so for their health benefit they have regular visits to the sanctuary hospital. Here they practice 15 minutes of target training. Verbal commands or a tap on a particular part of the elephant is rewarded by food when the elephant responds correctly. This allows the vets to regularly health check the elephants, take blood samples and administer medicine if needed without the need to tranquillise the animal. 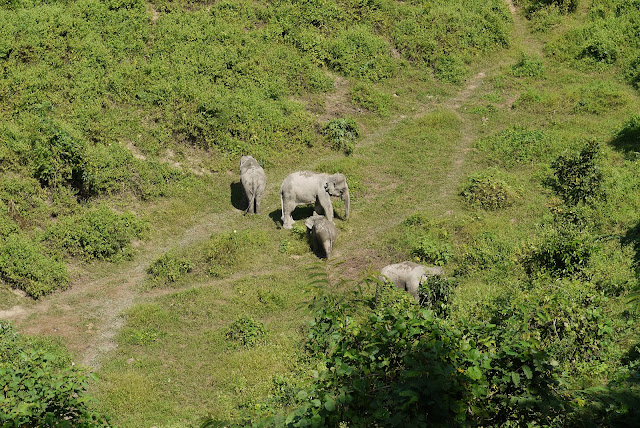 We spent 2 nights 3 days here and enjoyed watching the elephants. There was an opportunity to get up close to some which was quite daunting due to their sheer size and these are Asian elephants, not African elephants which are vastly larger than their Asian counterparts. L got to touch one of the elephants which he was happy about. The other couple in our group of 4 stayed for 1 night 2 days due to needing to return to Malaysia for a wedding, it was great having just the 4 of us in our group as it made the whole experience more personal. Their leaving meant that on our 3rd day it was just L and I who set off to help one of the biologists make ready an area for a couple of elephants who they hoped might breed. The breeding area in the forest contained no natural food sources for the elephants, so we set about hiding the sugar cane and banana grass we'd just cut up with a machete. The biologist was explaining that elephants are constant grazers so it's important they have continual access to food. Hiding the food 4-5 meters up in a tree, inside stuff and under the long grass was good as it keeps the elephants thinking and searching for the food, simulating as they would in the wild. I thought we'd hidden stuff pretty well but it took less time for these two elephants to find and eat the food than it had for us to balance precariously on ladders and hide it in the first place. 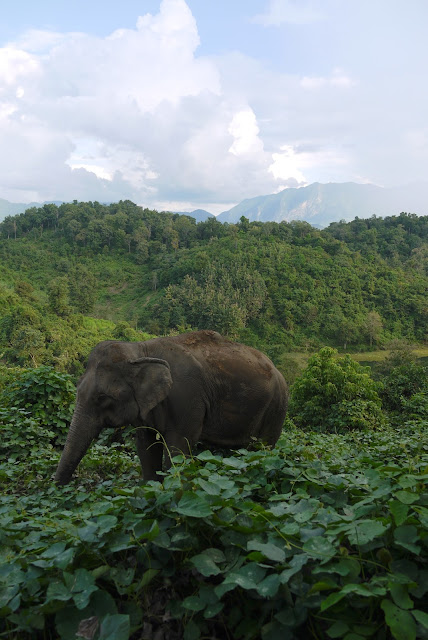 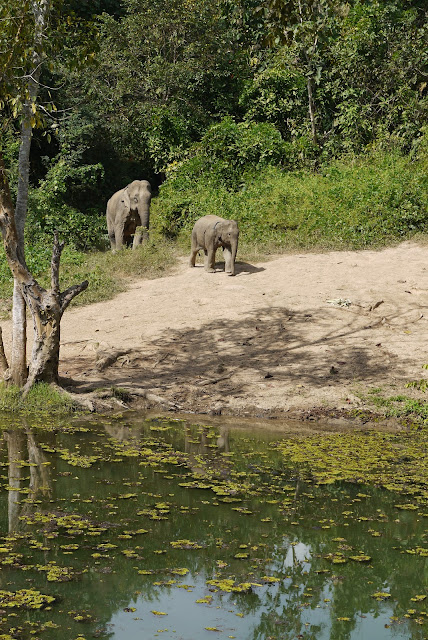 After spotting an old chap on a bicycle cycling through the streets of Vientiane dressed like the Victorian Hunter (minus the gun) from the film Jumanji, we heard that the breeding of the two elephants had been unsuccessful. We learnt of this not from the Victorian Hunter himself, but soon after when when we bumped into a lady who we had met at the sanctuary during her 2 week volunteering there! 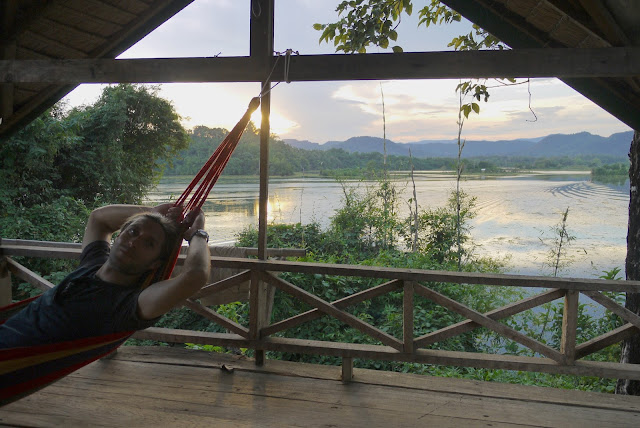 We were now gearing up for a Vietnam adventure. There was plenty of planning to be done, luckily we had a couple of days in Vientiane before our flight out. 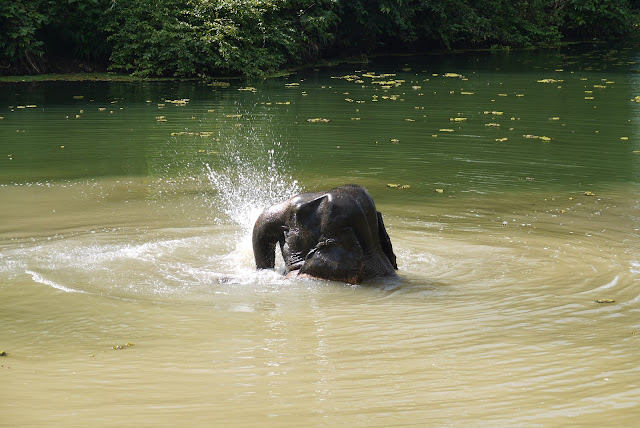 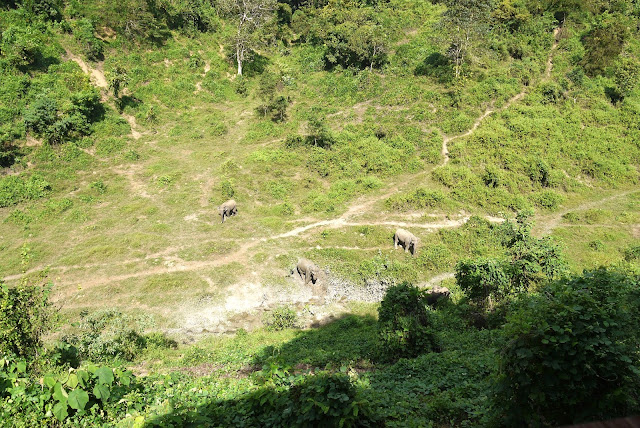