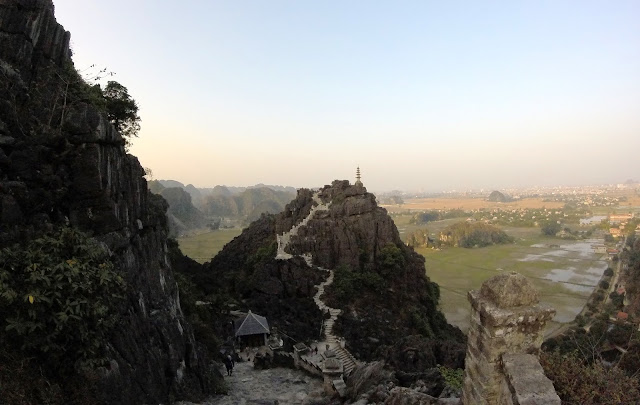 A $3 bus from Hanoi's main airport avoided the $20 taxi, the compromise however was an unexpected 40 minute walk from where, as his last passengers, the bus driver decided he wanted to drop us off! This did however allow us to get stuck into the night time hustle and bustle of Hanoi's streets, which had increased 10 fold on the traffic chaos scale compared to Thailand's Chiang Mai and everywhere in Lao. We were constantly being asked to buy things as we made our way across the city towards the Old Quarter, all the while trying to focus on not being run over. L managed to munch through numerous samples from ladies selling trays of donut holes, each a little disgruntled when he then didn't go on to buy any afterwards.

Our time in Hanoi saw us make an impromptu decision to sit through a bizarre water puppet show (google it). As we happened to be walking past the little theatre the show was just starting and inquisitive as to what exactly a water puppet show was, we bought tickets and before we knew it had become those annoying people who arrive late and uproot a row of seated people. We spent the next 40 minutes laughing at the slap stick Vietnamese comedy which unfolded. We also ticked the military museum off the list, here L spent a most agonising amount of time inspecting the vehicles and machinery. We tried to visit Ho Chi Minh's mausoleum where in 'apparently' lies the chaps preserved bod, but when we arrived it was closed and so instead we settled for the Ho Chi Minh museum and a walk around a city park. This was where we discovered what the locals really get up to on a Saturday afternoon; going to town on the park 'exercise' equipment! I'd always considered it a bit of a novelty, kids play stuff for adults, but here it was being taken very seriously. The old birds were especially  'mad keen'. We sat on a wall and people watched for some time. 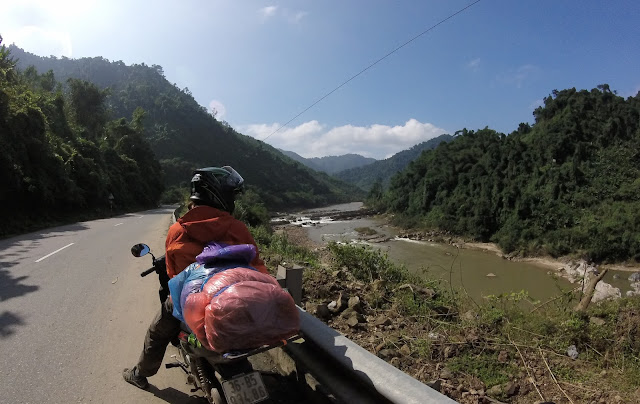 Rather than use public transport like we had in Thailand and Laos we opted to travel on our own wheels. Peddle power was unfortunately out of the question due to time restraints so we decided motorbikes were the way to go for our one way trip from Vietnam's Capitol city Hanoi (in the north) to Ho Chi Minh City, in the south. Our chosen route was approx 1700 miles and a good mix of winding mountain roads to beach hugging coastline, but first we needed some bikes. Buying a couple of bikes isn't as much of an off the wall idea as it may sound as owning a bike over here is much like owning a shirt or pair of shoes. After spending an hour scouring the rust buckets on Hanoi's buying and selling sites, we decided to go down the rental option. L had found 3 companies offering one way rentals and the last one was within his tightfisted Yorkshire budget! This also meant we could save time trying out second hand bikes to buy, and the time needed to sell at the end of the journey thus giving us more days on the road for the actual trip. It must be understood at this point that L and I are used to riding an 850cc Triumph, however the whole of SE Asia appears to operate on ...wait for it ... the 110cc semi automatic Honda Wave!! These things are everywhere and perform the same load carrying capability as a van / trailer / car would do back home. Seemingly there's really nothing that the Vietnamese can't carry on a Honda wave. We've seen it all. Whether it be live stock, eg a couple of water buffalo or 5 full size pigs, or a double wardrobe, or a chap dragging a couple of 20ft lengths of bamboo, or simply doing the school run with mum dad and three kids all aboard. So when in Rome.... 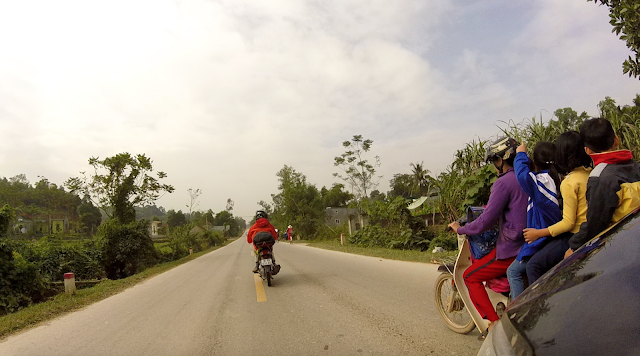 Our new wave machines came with only a few thousand kilometres on them and a rack extension to fix our bags too. Our first challenge was to exit Hanoi unscathed. The traffic in Hanoi is pretty mental, thousands of bikes with handfuls of trucks, buses and the odd car thrown into the mix. No road rules and hardly any road signs. All of which resulting in a kind of structured chaos, where anyone can do anything but people are okay with that. The one rule that appears to exist is that the biggest vehicle can do whatever, whenever, no questions asked. Riders beware! 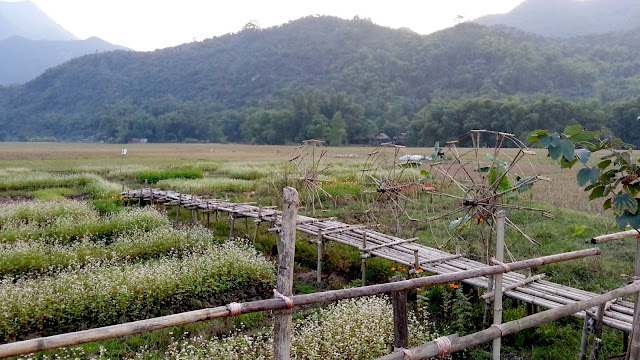 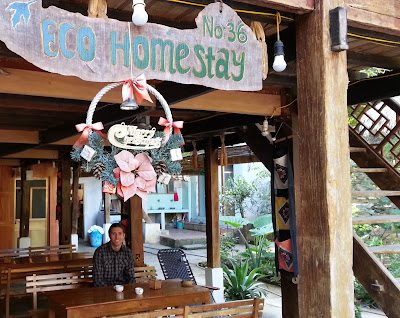 With the help of google maps we exited the city as quickly as possible and headed south west to Mai Chau. It was here we stayed in a bamboo stilt house at a lovely home stay in a valley surrounded by rice fields and met a retired British couple who joined us for food and shared some pretty amazing travel tales. They were spending 3 months travelling over land in S.E Asia whilst their boat, which had been their floating home for the last 15 years, was docked in a Malaysian marina. The last 15 years had taken them 3/4 of the way around the world and so they had a 1/4 yet to sail... hats off to them! 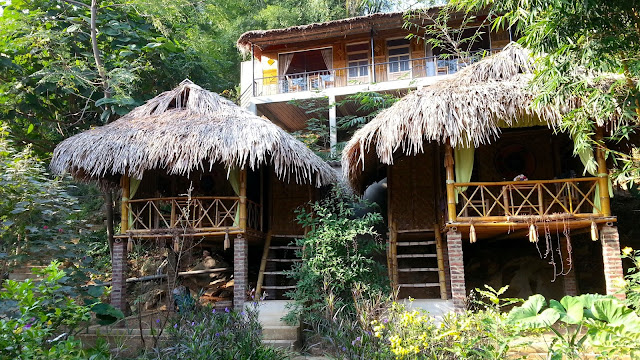 Making our way east we stopped a night in Ninh Binh so we could take a walk up the lying dragon mountain and watch the sun setting over the breathtaking landscape. Heading south into the mountains and with no accommodation booked (according to booking.com there was nothing to book!) we made a stop in a kind of nowhere town. Google turned up one option a motel/hostel but when we arrived it was closed. The shop lady from next door, who didn't speak a word of English other than 'hotel' (to which we nodded) then flagged down a passing chap on a moped who gestured we follow him. He turned out not to be the motel/hostel owner but someone else entirely who lived a few houses down the road and had a couple of rooms to rent. We looked around and accepted, a slightly grimy, double room with the 'in need of a good clean' en suite for a record beating sum of £4.50 for the both of us, for the night. 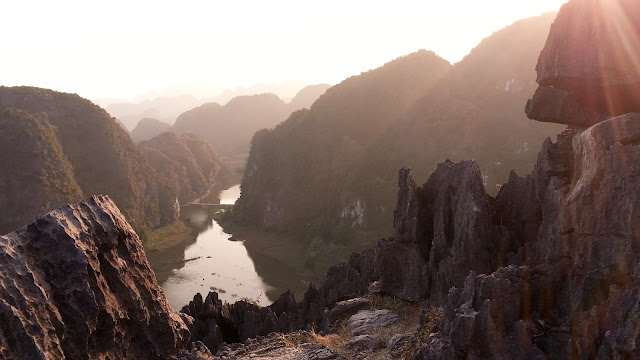 Continuing on to Phong Nah the wave machines were performing well, and given the condition of the roads (with pot holes like you wouldn't believe) and thus the modest speeds we could travel at, they were... (never thought I would utter this)...proving to be powerful enough! We stayed two nights in Phong Nah to allow us time to visit a humongous cave. Paradise cave is one of the worlds largest, spanning 31 kilometres in length!!! For visitors though, there is a board walk to take you 1.5 kilometres inside giving you a feel for its sheer size and beauty. It is defiantly a must do in the area, and despite being slightly pricey (£8 each) it's still very worth it. Incredible stalactites and stalagmites adorn the inside of the immense cave. 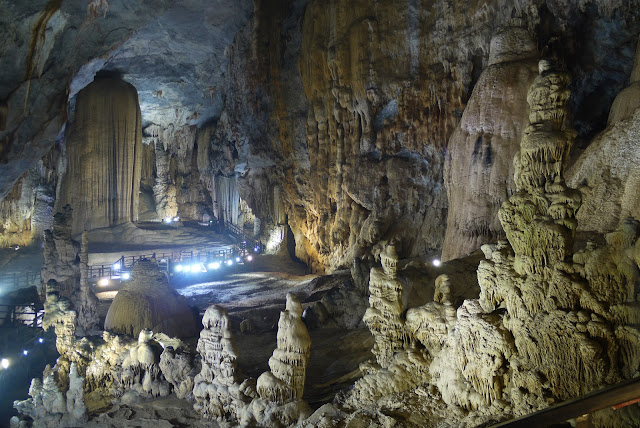 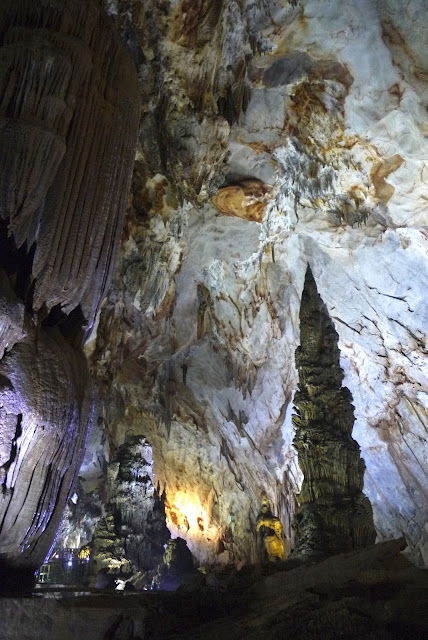 The weather had been glorious for the first few days of riding, allowing us to soak up great views of the landscape and of the people and the different lives they live. Young children no older than 5 being trusted with a machete to help around the home. Women in Sunday best walking cattle down the road. Our departure from Phong Nah however was not accompanied by the best weather and this was to be a theme for the rest of the day! Rain and thick fog plagued our ride for most of the day. We bought some ponchos to help keep the weather out, resulting in us looking like a pair of marshmallows, ridiculous but we remained mostly dry. Those amazing mountain views were cut down to nothingness by the fog and instead we got to see some impressive landslides. The next morning we were back to full sun for the remainder of our mountain ride south east before dropping down to the coastal town of Hue. I'd booked us into another home stay, again another timber hut, not quite as picturesque as the last one as the owner, a friendly chap, was 12 days off finishing major improvements, so the place was unfortunately somewhat a building site. 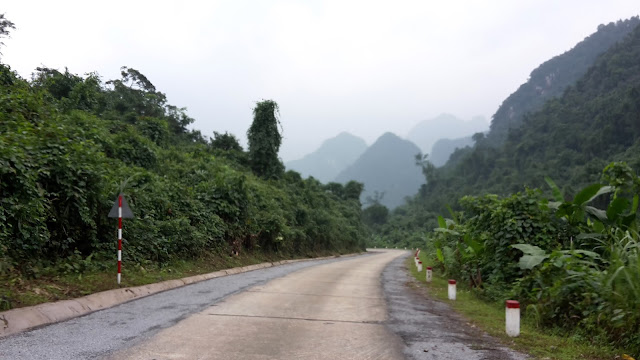 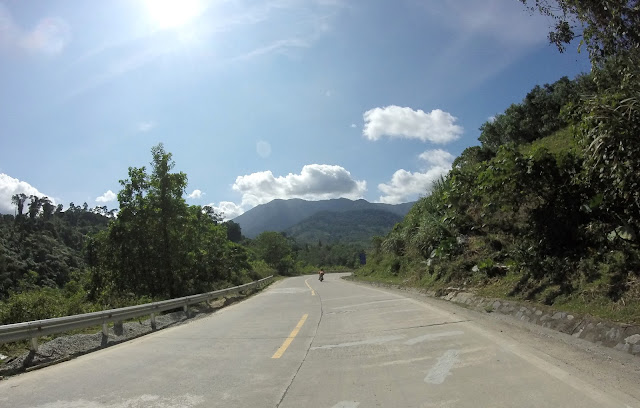 A tour of Hue's sights saw us visit the imperial city, an old tiger arena that L had read about, some royal tombs and an abandoned water park which had something of a post apocalyptic feel to it. L assured me that the government had stepped in and rounded up all the crocodiles which had got loose after the parks closure! After tipping a security guard on the gate we were allowed to ride through. If you hadn't already gathered, both L and myself are super sad, so we'd been quite excited at the thought visiting our first abandoned theme park. It was a strange place, very eerie.

The stretch of road heading south from Hue along the coast to Hoi An is world famous and is known as the Hai Van Pass. In the Top Gear episode when they rode Ho Chi Minh to Hanoi, mostly the same route as ours but in reverse, they labelled it one of the best coastal roads in the world, this was where we were heading tomorrow... 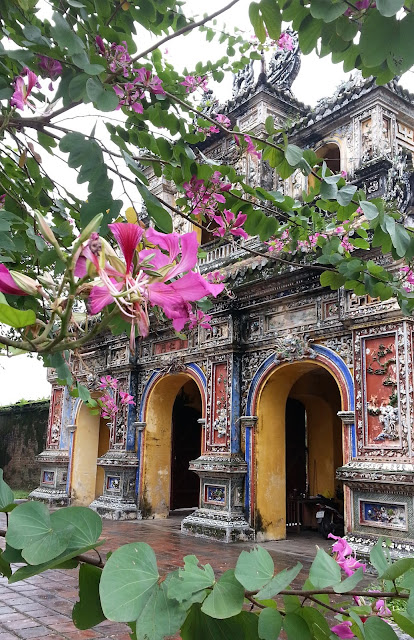