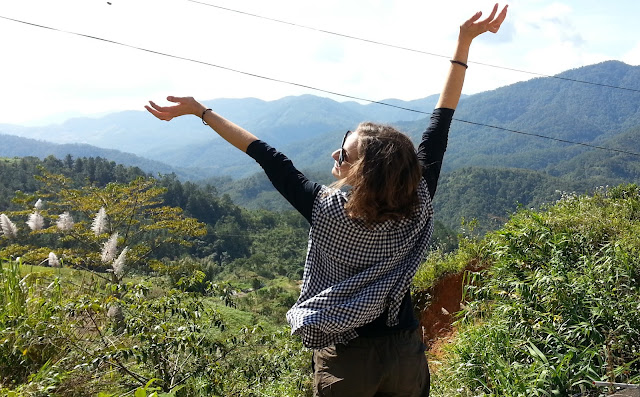 It was foggy...The famous Hai Van pass was not offering any breathtaking views this morning! This was not what I was expecting and especially not the amount of tourist busses, trucks and day rental motorcycles also riding the pass! We crawled up to the summit chocking on the clouds of black smoke left behind from the trail of coughing busses travelling in front of us at 10 mph. Frustratingly the fog coupled with the hairpin bends made it too risky to attempt overtaking. At the summit the road widened into a chaotic buss park with loads of roadside food stalls and hundreds of meandering tourists. I wasn't expecting that! We didn't stop and instead left the busses behind. The ride down was more of what we'd hoped, quiet, and luckily the fog cleared allowing us to actually see! To be honest a pass we did a few days later which turned out to be much better, zero traffic, clear blue skys and breathtaking mountain views. It was only missing the brilliant blue sea, but the sea hadn't actually been 'brilliant blue' when we did the Hai Van pass anyway because of the dull weather. 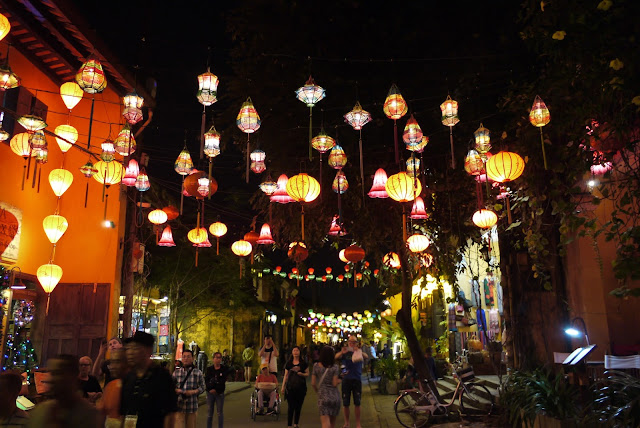 Hoi An turned out to be one of my favourite places in Vietnam, L's too. I'd booked us into a quaint place called Petunia Gardens which was the family home of a lovely lady who managed the home stay for her parents, because they didn't speak a word of English. It was refreshing to explore Hoi An which is a small, picturesque, pedestrianised city with hundreds of old timber colonial buildings butted together on winding streets adorned with plants, flowers and hanging lanterns. We happened to arrive on the day of a festival (we seem to be good at doing this) and at night, lanterns on gondolas offering rides down the river, twinkled across the city.

Our PakSafe rucksacks came into their element here as there was a minor issue with the inability to lock the glass French doors to our ground floor garden room. Newly fitted, the wood had swollen and thus they couldn't be properly closed. We were assured by the lady that our bags would be safe and it would be absolutely fine, to which it was, but without the added security of the PakSafe rucksacks I can't say I would have been confident leaving our passports, money, cameras, laptop, iPad all in our bags, in an unlocked room. So we leashed our padlocked rucksacks together and around a rail in the room and headed out, carefree and content. 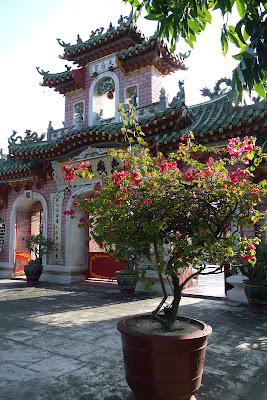 L had sneakily already done some research on Hoi An and after 'two-ing' up on one of the wave machines, I found myself in the midst of 'carpentry village' accompanied by an enthusiastic L, who wasted no time in approaching a chap who was busy making a wooden boat. He seemed more than happy to let L crack on, giving him a hand knocking and chiseling a few pegs into the side of his boat. L also got a tutorial on how to stuff the cracks with what looked like shredded bamboo, which from what we could gather does a top job for keeping things watertight!?

There was a small workshop opposite the boat builder selling carvings and wooden gift ware. We ended up spending quite a lot of time here because without revealing his profession, L managed had to get the chap to give him a carving 'lesson'. I wasn't sure what he said to his colleague but the chap seemed quite impressed with L's woodworking skills and later offered him a job!..Alas it wasn't meant to be. 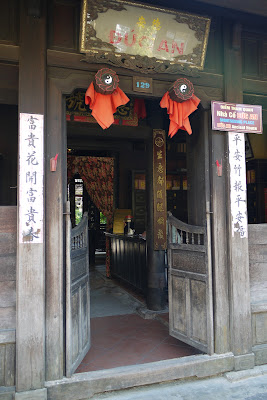 Both L and myself would have loved to have spent more than 2 nights in Hoi An but we needed to hit the road again. Heading inland on winding mountain roads and in glorious weather we completed what turned out to be a mammoth 6h30min ride ending up in Kon Tum just before sunset, just in time to search out some digs. Kon Tum would become the town we would forever associate with Vietnamese food. This night of translation hilarity absolutely  deserves a blog post on it's own so I will say no more on the matter in this blog post...

From Kon Tum we headed back to the beaches staying a night at Quy Nhon. Our daily routine was to fill up the wave machines with a full tank of fuel each morning before setting off and generally this would see us through to the following day. 100,000 Dong would fill both bikes which equated to around £3.30. Our route for the next couple of days was coastal and so we continued south to Nha Trang where it seemed, the entire population of Moscow were presently holidaying. We spent more time here looking for a post office than doing anything else, which was fine because Nha Trang isn't really the type of place I'd ordinarily go to. It's a built up city which feels like a tourist trap and is seemingly full of Russians. On a side note and rather bizarrely...If you're a fan of spit roasted crocodile then you'll find yourself right at home here! 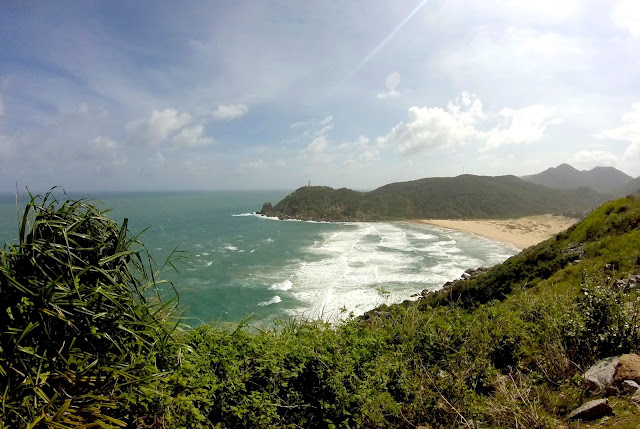 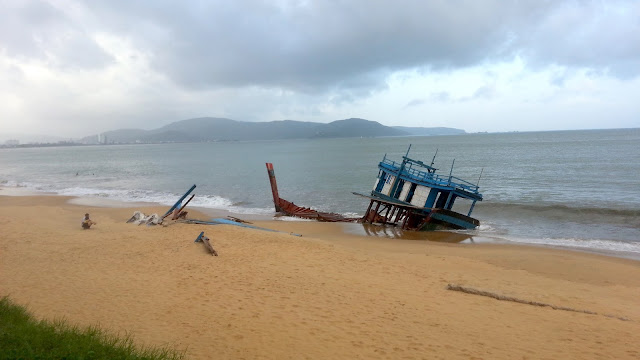 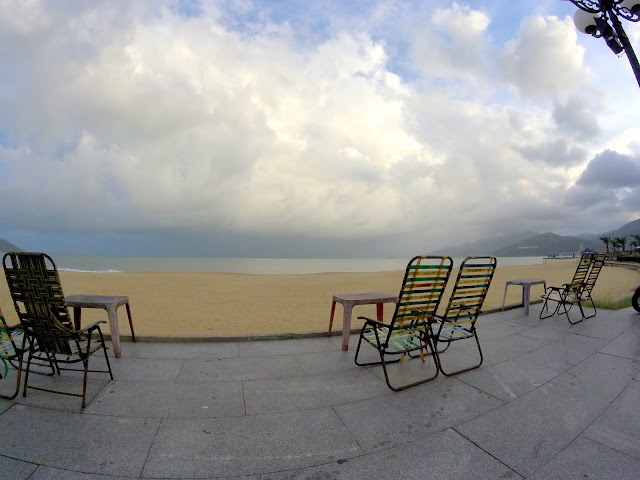 A few hours inland from Nha Trang is Dalat with it's interesting French colonial architecture. The mountain road between was being heavily repaired after some mega landslides, so perhaps not such a good route in the rainy season. With its cooler mountain temperature we found ourselves back in trousers and jumpers. We stayed in a newly built hostel situated on a hillside at the end of a rubble track, with a huge communal balcony overlooking the city. Other good views of Dalat were had when we stopped by the 'Crazy House' which functions as a quirky hotel and because of it's crazy architecture, also attracts curious day visitors like ourselves. 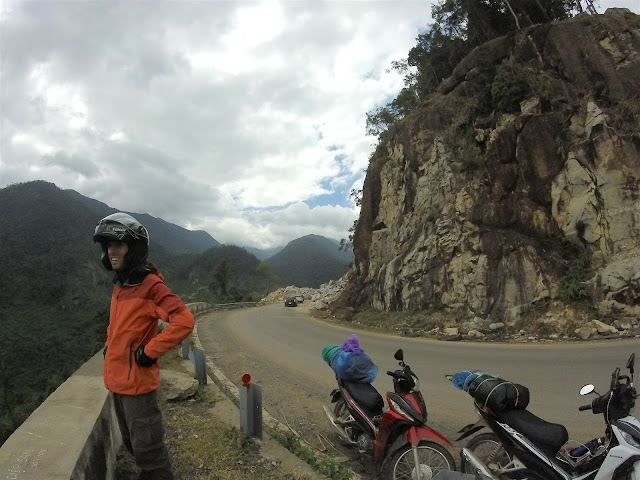 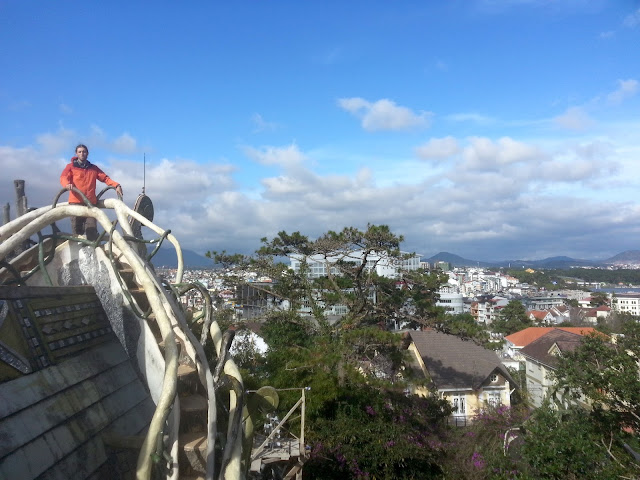 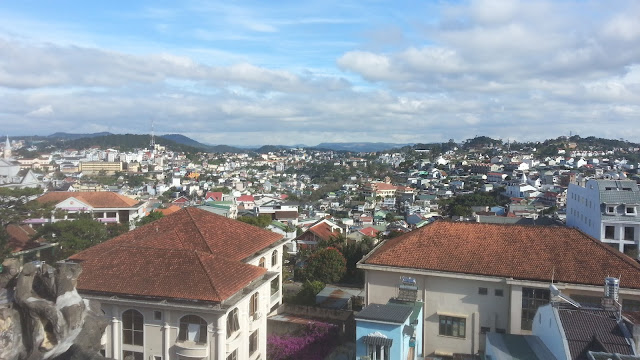 The mountain pass I mentioned earlier, which for us turned out a far better ride than the Hai Van pass, was south of Dalat on road QL28B. Unfortunately this was also the road where the phone holder on my bike decided to break and whilst in my care, L's phone fell dramatically into the road, where it broke into its component parts and was then ran over by a chap on the moped behind me. L who was riding in front hadn't noticed this, nor me stop, collect and quickly re assemble the remnants of his phone. This mishap had added a few more screen cracks to the previous ones which were a continual reminder of the time before our travels, when I'd accidentally dropped his phone and then stood on it. The new battery L had bought before our trip was now looking a bit scuffed around the edges but it wasn't leaking and remarkably the phone still powered up. There was no way around confessing to L about what had just happened... 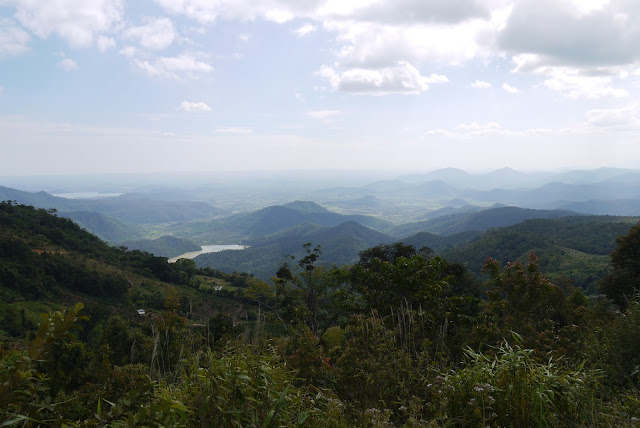 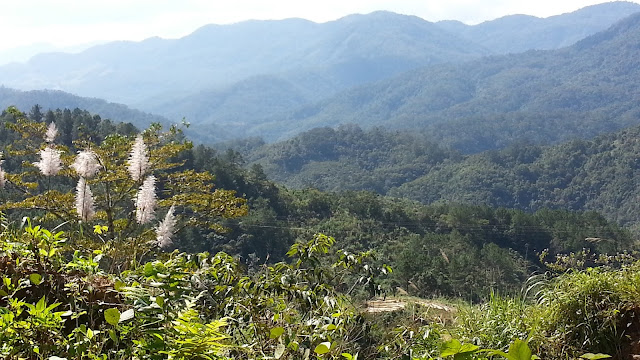 We continued riding on towards the glimmering sea ending up in the coastal outskirts of Phan Thiet. We'd been looking forward to the ($14) garden lodge I'd  booked but upon arrival we were bombarded by a nauseating smell from inside the room. It turned out the owners had just been sprucing up the rooms and had repainted all the wood work. It looked super fresh but we were starting to get headaches (not so super fresh) so instead we stayed in a room at a place a few doors down, saving a few dollars on the price. There did happen to be a nice little Mexican restaurant near our accommodation so later on both L and I over indulged in Mexican food, (we'd been craving this for a while) and spent about 4x the amount we usually would.

Our last home stay before tomorrows ride into Ho Chi Minh city, was in Ho Coc, again not far from the beach. Here we met 3 backpackers heading north on 3 Chinese knock off Honda Wins (125cc common backpackers motorcycle). Unluckily for them they were already having engine problems... our wave machines may not have looked the biz, but we were both quite relieved at having had no issues (other than the flat tyre.)  Astonishingly it was recommended we get the oil changed on the wave machines every 1000km! That had meant 2 oil changes on our trip which we thought a little excessive but with a back street mechanic on every corner and genuine Honda dealerships not hard to stumble across, it didn't cause any problems or delays during our trip. Unlike in the U.K when you book in for a service and you get told the appointment is 2 weeks on a Thursday, in Vietnam you just turn up and can expect to have whatever the problem, fixed, and to be able to drive away within 10 minutes. There's no waiting around, they're ultra efficient. 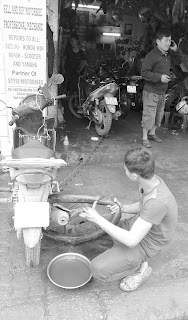 Before we knew it was sadly our last day on the wave machines and we found ourselves trundling along a boring, dusty, trunk road heading away from the coast towards HCM. I must admit I'd been dreading handing the bikes back to the office in HCM because the traffic was supposed to be ten times crazier than in Hanoi, and that had been difficult enough! Opting for a quieter and better surfaced road we left the trunk road behind, finding an excellent local bakery en-route with a hilariously out-of-place baby Jesus nativity scene. For almost an hour google maps kept wanting to turn us around back to the trunk road we had left long behind. I thought this odd because normally any deviation from the programmed route, results in an annoying 'instant rerouting'. Upon closer inspection I discovered the reason for this was because according to google maps, there was no bridge crossing over the river into the city, our road just abruptly terminated at the waters edge. It looked like their could be a ferry, so we continued in the hope that there was and it was (a) operating today, and (b) cheap. Luckily we weren't disappointed, 30p got the pair of us and the wave machines across the river and into the chaos of HCM. 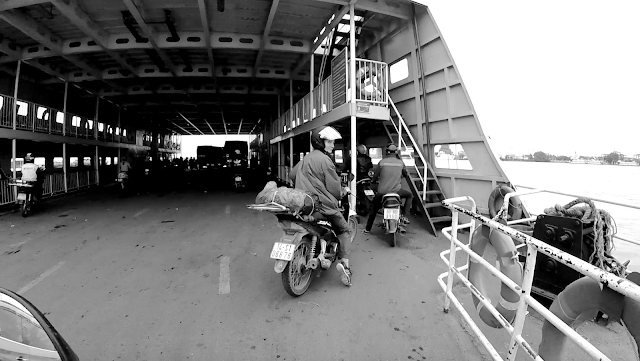 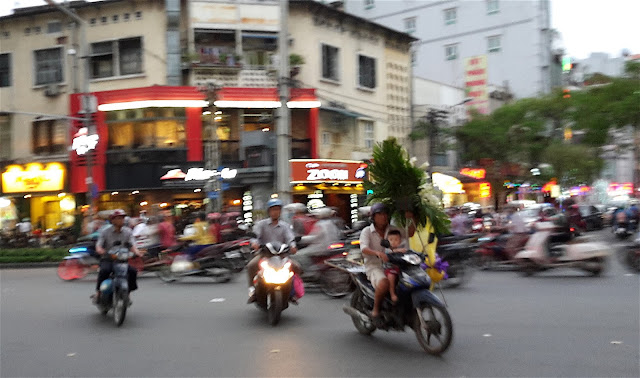 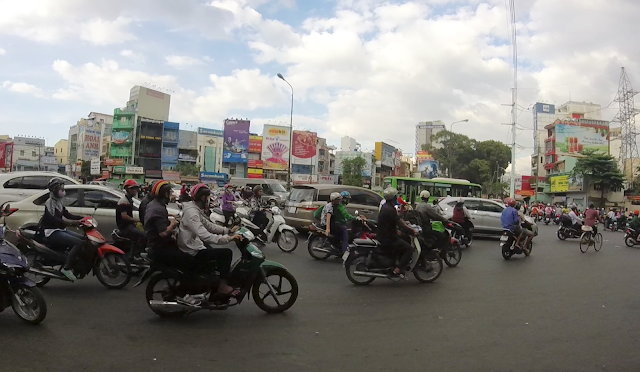 Around 10 million people live in HCM and there's around 8 million motorbikes! I don't think I'll ever again experience traffic like this, nor would I want to! After a handful of chaotic wrong turns we managed to arrive at our hostel, slightly stressed but still in one piece and after dumping our bags we continued onto the rental office to return the bikes. Depositing  the wave machines and receiving 'I survived Vietnam traffic' T shirts, marked the end of a chapter for a part of our Vietnam travels, but we weren't leaving the country just yet... The 23rd Dec was my birthday and we had an early morning date with a floating market in the Mekong Delta... 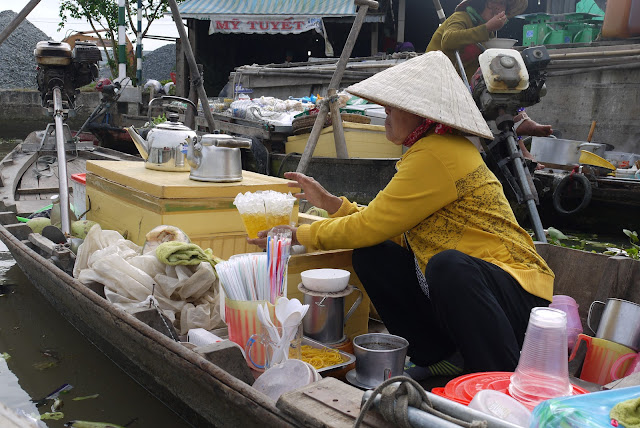 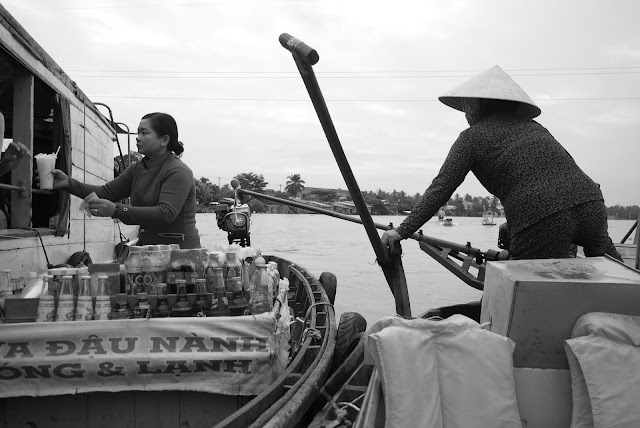 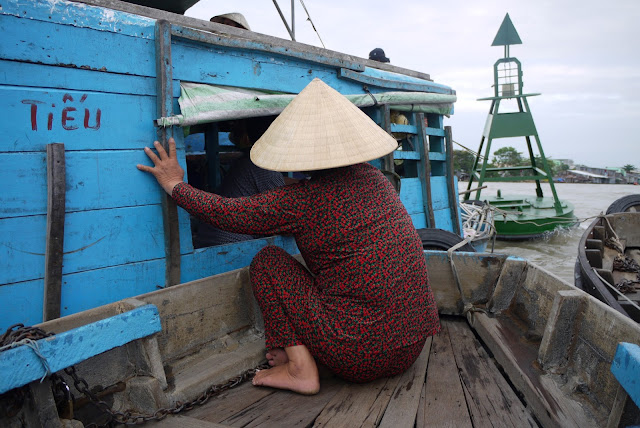 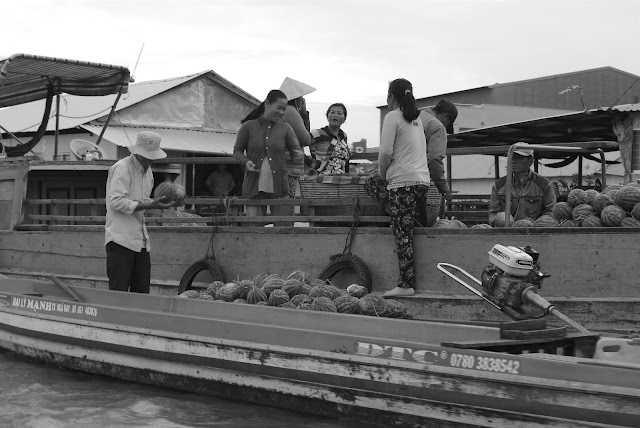 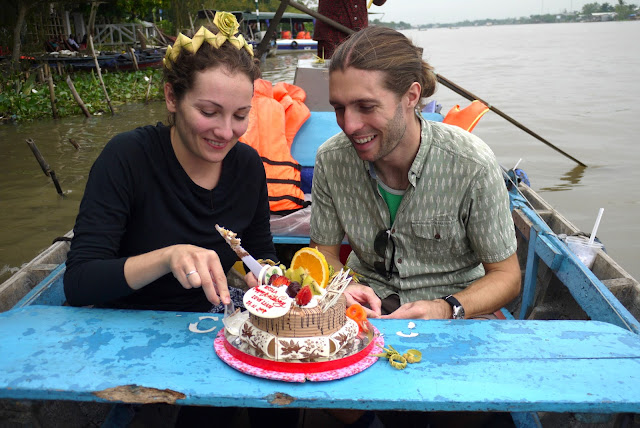