33. ONE PORTION OF SWINE FLU COMING RIGHT UP...

We finished our coffees after a failed attempt to order food at a little cafe. It was, might I add, only after already ordering and receiving drinks did we discover that the place wasn't actually serving food this particular evening. So we set off again in search of somewhere else to eat.
We passed a busy but small Vietnamese gaff and after gaining the attention of the locals sat within, we plonked ourselves on a couple of miniature plastic chairs, slightly concerned our western weight might snap the legs.


A guy who we could only assume was the owner, came over smiling and handing us his Vietnamese menu which consisted of 10 dishes and apart from the words for chicken and noodles, was completely untranslatable. So we spent the next 15 minutes trying to communicate L's desire for fried spring rolls, only to complete confusion on both parts. Our Vietnamese guy was enthusiastically pointing at a particular noodle dish and gesturing towards L. So in the end L settled for the chap's recommendation which Google informed us was 'Father of Ram'...whatever that was?! I was around 80% confident I'd managed to order fresh Spring rolls which wouldn't satisfy L's craving for fried spring rolls, but it was as close as we were going to get on this particular evening. I wasn't particularly hungry so the plan was for L to have some of my fresh Spring rolls along with his enforced 'father of ram'.

A 9 year old girl sat on the table behind (who's mother was quite insistent she came over to practise her English...we could have done with her when ordering) explained in enough words that the fresh spring rolls were make-your-own. I would be presented with a variety of raw ingredients. This was not exactly what I had envisaged and somewhat more labour intensive than what I had hoped for. As luck would have it, in the end 6 huge pre-made fresh spring rolls arrived. I can only assume that Vietnamese guy thought me too incompetent to put these together 'correctly' myself and judging by what followed, I think he would have been right.

Vietnamese guy sat awkwardly opposite L along with 9 year old girl, so as to offer L assistance in how best to eat his food. It wasn't long before they hijacked L's accompanying dishes of soy and peanut sauce. It became apparent, much to the amusement of L's personal eating gurus, that to dip 'father of ram' into either sauce was in fact completely wrong. Instead they both took delight in enthusiastically drowning L's noodles in the sauces then gestured he tossed everything together. L had started a sarcastic running commentary,  just-to-say audible through a gritted smile. I found the whole situation highly entertaining.

It was one of those force yourself to eat situations, the food was good but there was absolutely masses of it. I was full having only eaten 1 and 1/2 enormous fresh spring rolls and L the same after almost having drowned in his huge bowl of mystery noodles.
Vietnamese guy eventually went back to his counter to serve other customers relinquishing the awkwardness. We took the opportunity to discuss what to do with the remainder of the fresh spring rolls. L managed to force down a couple more so as to avoid having to throw them quickly over a shoulder, and we asked for the bill.

Vietnamese guy wrote out our bill in what I consider the neatest, precise handwriting I've seen in a long while and he'd even taken the time to translate the bill into English especially for us. When he presented it to us L and I looked at each other in amazement, both trying incredibly hard to contain all outbursts of hysterical laughter.
According to Vietnamese guy's handwritten bill... L's order of 'father of ram' was in fact 'Vermicelli Spin' and my portion of fresh spring rolls... well... 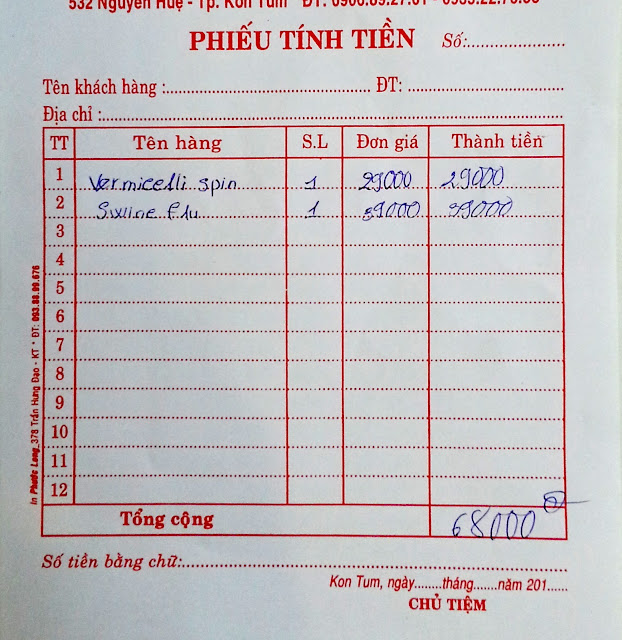 Google translate you really need to sort out your Vietnamese!