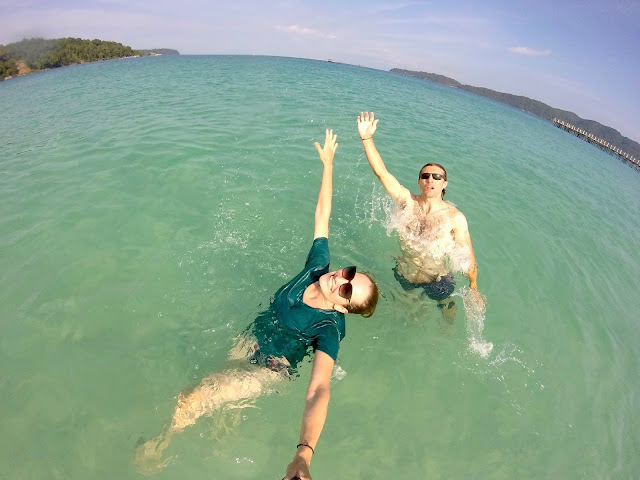 Our 3 month Asia adventure was up and neither L or myself saw it ending the way it did! Thankfully we both survived the penultimate day which turned out to add an unwanted amount of adrenalin to our adventure, but at least looking back it gives me something quite funny to write about.

However prior to the above, L and I had bussed our way from Siem Reap to Phnom Penh and the following day from P.P to Kampot. The latter journey broken up with a night in P.P so as not to completely over do it. Due to not much availability in P.P at such short notice, we ended up staying in a shared hostel room (4 including ourselves) the first of such experiences on our trip. It wasn't so bad.

L and I spent 20 minutes in the back of a tuk tuk bumping over a narrow dirt track which later turned into no track at all. We weaved between trees and around the stilts of village houses over boggy undulating grass and through gardens until at last we arrived at Ganesha Eco guesthouse. As it transpired, our driver had taken a route no longer used to access the guesthouse. A newer, slightly less bumpy road now superseded the old, which had been abandoned for obvious reasons. Never the less the journey had the three of us in fits of laughter as we bounced, skidded and scraped by the trees and shrubs. One of the more unique features of Ganesha Eco guesthouse, aside from the quirky thatched stilt bungalows and thatched round houses, (to which we had now become accustomed to) was the natural swimming pool. It was a large pool, better looked after than your local fishery and apparently dug to a depth of 5/6 meters. We took the owners word for this as neither L or myself dared dive down deep enough to test, fearing an encounter with creatures from the unknown. I'd heard of natural pools before and their benefits for the environment and eco systems due to the absence of chemicals but as a user of this particular pool, we soon discovered the downside. I can only assume it was because the earth was so red because the colour of the water itself was brilliant blue and very inviting, but by the end of the day the inside mesh of L's shorts and all other white sections on our swimwear... had turned brown! Giving the appearance, particularly in L's case, that he might have had a slight accident!

A minivan with no working air con and that also made a pit stop so a local man on board could buy a chicken, which he carried back onto the minivan in something resembling a wicker handbag, took us to Sihanoukville. L spent most of the journey listening to the grand plans of the Khmer guy he was sat next to, who was a little older than ourselves. I could over hear the guy telling L about his fortune making scheme which involved building some holiday lets and a pond for crocodiles so he could farm their eggs for his hungry tourist guests! Apparently keeping crocs is perfectly fine for anyone to do in Cambodia!

We had a slight issue regarding the motorcycle helmets we'd bought for riding Vietnam, in that we were still carrying them with us. This had been a complete hassle for our many  bus journeys across Cambodia because of the problem of where to put them. Inside the belly of the bus would guarantee damage and on the overhead shelf they were too large to fit, which meant for most trips sitting with them on our laps or crammed between our feet. Not exactly comfortable for those 6 hour journeys. As we'd spent a few bucks on half decent helmets, although despite this I'm still not sure either would be up to EU standards, the plan was to sell them on before returning home. One thing I had noticed was that the Khmer people seemed to wear slightly better quality helmets than the Vietnamese, who mostly wore something resembling a hard cap with an arched cut out in the rear enabling women to wear a high ponytail... equally there were many people in both countries who wore no helmet at all. 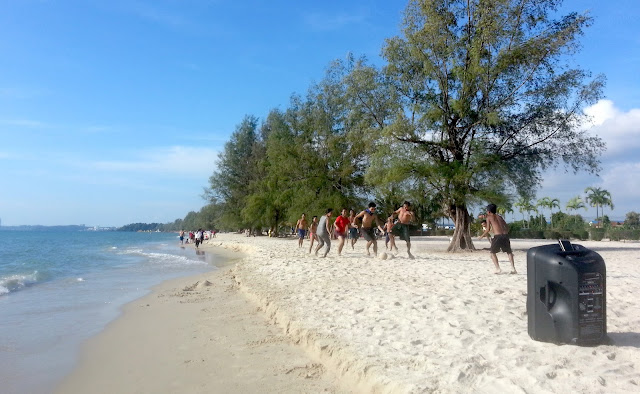 L had his birthday on “Otres 2” beach soaking up the sun, swimming and more importantly (for him) eating and drinking. With his new found love for cocktails he was now in his element and a roadside shack opposite our guesthouse with a sign advertising "Nutella bomb" struck immediate intrigue. In essence a blob of Nutella incased in a donut dough and then deep fried. Three of these became a substitute birthday cake for L. The day after L's birthday we were island bound. Arriving at the jetty by a new style of tuk tuk to what we'd so far seen on our travels, a sort of 90's pick up, we were only an hour away from island bliss where we planned to spend the last 5 days of our entire trip. 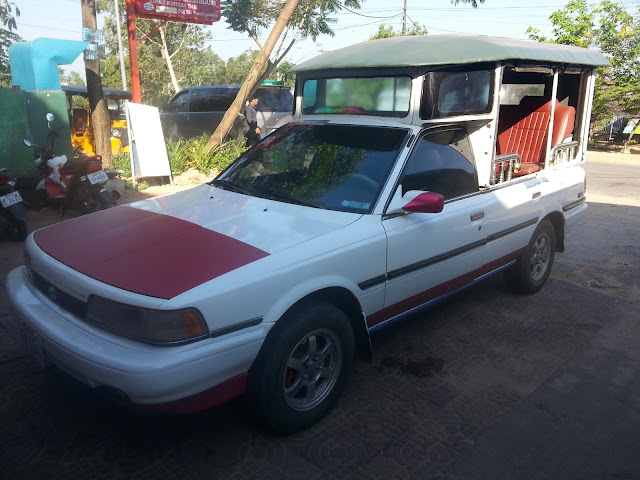 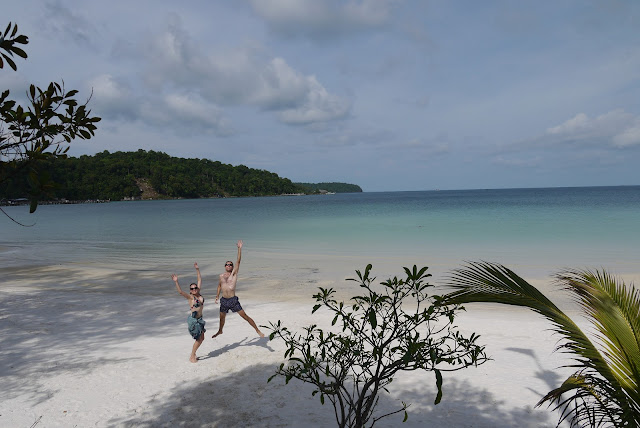 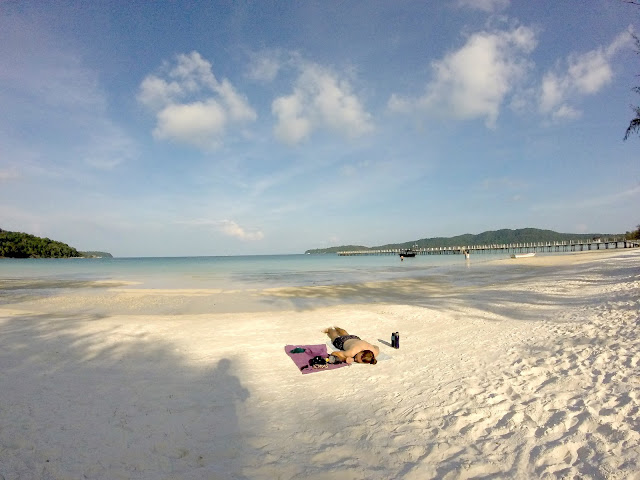 Our island accommodation boasted a $7 all you can eat buffet breakfast. $7 was rather pricy in these parts, you could buy a couple of meals for that on the mainland. Here on our tiny island we were a captive audience, we had known this  beforehand and so expected to pay higher prices. L surveyed the buffet situation and reported back with great optimism. A selection of fresh fruits, muesli, yogurt, Khmer soup, breads, juices, as well as omelettes, eggs, bacon, potato wedges and pancakes cooked to order in front of you. It isn't an understatement to say that we filled our boots. We reintroduced an idea that came to light a few years ago "reverse rationing". Rather than making your food last throughout the day with separate meals, have one colossal feed that then sees you through until at least 10-12 hours later. Starting at 8am we continually grazed until the buffet closed at 11am. As it turned out we surpassed our expectations and ended up skipping all other meals, only eating again at breakfast the next morning!…when we decided to do the same again! It was a colossal win for the wallet but not so much for the restaurant who obviously didn’t factor Yorkshire thriftiness into their costings. 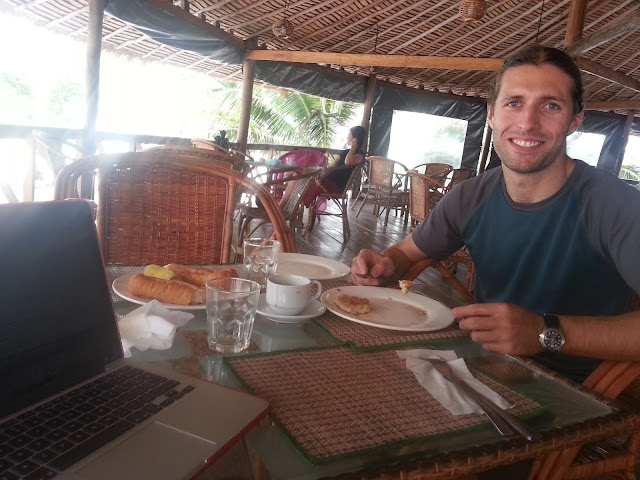 Neither L or myself had ever seen bioluminescent plankton before so after a tip off that it was possible to see the sea glowing phenomenon here on the island, we jumped at the chance and trekked through the jungle, crossing the island to Lazy beach on the opposite side. Here we had been told that the spectacle was usually best around 9:30/10pm. So we waited and in due course learnt from another lady that it was the disturbance of the plankton that make them glow. Consequently it was apparently, a lot better to see when swimming because the movement would cause the plankton the glow. The only problem with this was that we hadn’t brought our swimwear. The waves brought in some glowing plankton but now that we knew it would be even better further out…we couldn’t miss the opportunity. So we stripped, left our clothes on the beach and headed out into the dark water kicking and splashing as much as possible. It was an absolutely amazing experience. Unfortunately the GoPro didn’t pick up any of the footage but the photo below gives an idea. 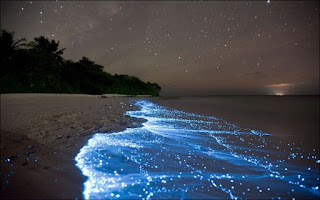 We woke up early on the 3rd third day of supposed island bliss to a raging thunderstorm directly overhead. Our thatched bungalow was only leaking slightly but more horrifying was the discovery that our mosquito net didn't have a small enough gauge to keep them out! 7 had squeezed through during the night and had proceeded to eat us whilst we slept. (No they didn't get in through a hole or because we hadn't tucked the net under the mattress correctly. I watched 2, like ninjas, the following night squeeze through the net with my very own eyes!)
The rain had stopped by 6am but the wind remained and brought up half the beach, depositing it on our bed. All ferry crossings for the day were cancelled but the sun remained out and the sky still brilliant blue.

This brings us to our penultimate day and the ferry crossing back to the mainland in which we nearly capsized. The wind had settled slightly allowing the ferry services to resume for a brief window, so we decided to leave the island a little earlier in order to ensure we would not miss our flights the following day. L sat opposite an English guy on the ferry who'd overdone it the night before. Sadly extreme sea crossings and hangovers don't go hand in hand and the chap spent the journey very green faced and for the most part poised, ready to lean over the side. The 30 minute speed crossing took 45 hellish minutes, around 20 of which we spent airborne and twice we almost capsized.

So here we are at the end of our 3 months in South East Asia now back to a chilly UK, stay tuned to hear what's next... 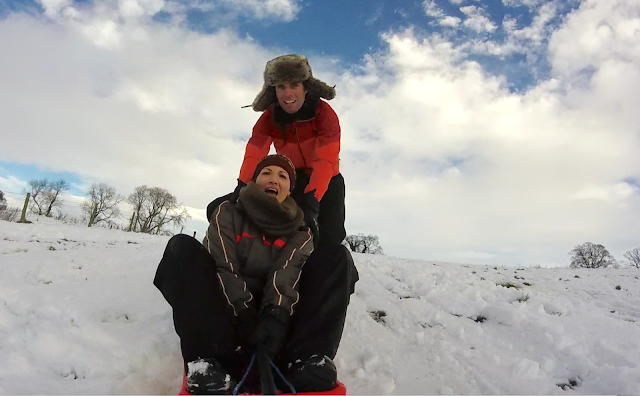