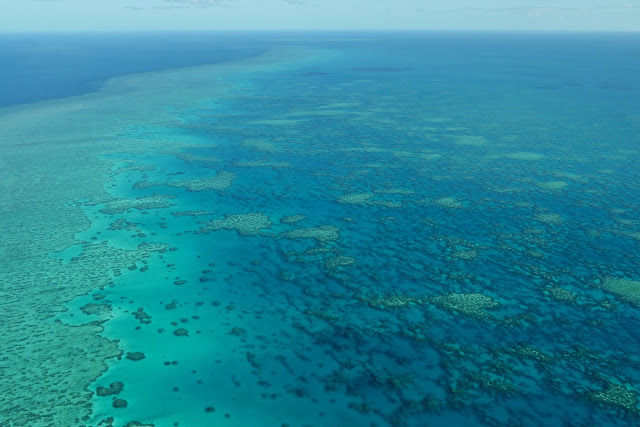 This was the moment we discovered that we’d picked up an unwanted hitchhiker. I was in the back pulling down the pop top readying the van for hitting the road and L was sat waiting peacefully in the drivers seat, just moments away from getting the shock of his life. When getting into the drivers seat L had failed to notice that the biggest Huntsman spider either of us had ever seen, had wedged himself in the narrow gap between the drivers window and the external wind deflector. Now usually I’m the one with the spider phobia but this beast even had L squirming in his seat when he first caught sight of it, initially unsure if the thing was clinging to the inside or the outside of the window. I remarked the absolute obvious “Whatever you do, DO NOT open your window!” 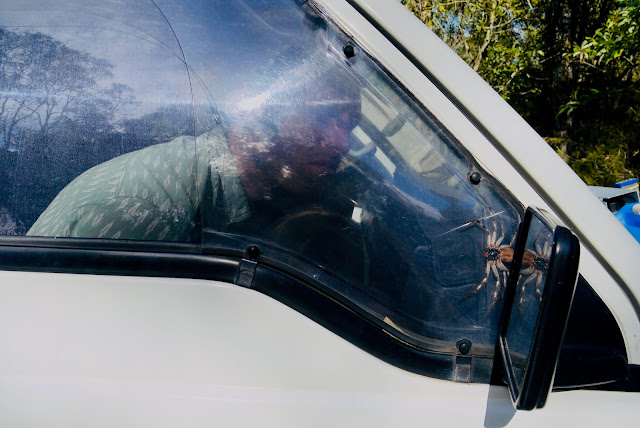 After landing back on the mainland after an awesome off road and mostly off grid time on Fraser Island, we continued north up the Queensland coast passing through Bundaberg: a town known for it’s rum and ginger beer. Sadly, although not surprisingly, the price for a tour and taster session at either factory was considerably more than what was printed in our 2008 Australia’s East Coast guide book (another of L’s outdated eBay gems). With our spirit of choice within the Crampervan household at present being gin and not rum, we opted for Bunderberg’s ginger beer tour. No compromise considering we’d actually been hooked on stuff ever since leaving our Brisbane Workaway, where over our 2 week stay, we’d consumed quite a lot of ginger beer. Neither L or myself had expected the company to produce 17 different drinks so by the end of the tour we’d consumed a whole lot more. We left with 6 bottles and found ourselves well and truly back on the sugar train eeeek!! Not great, but I suppose quite fitting considering we were now driving through sugar cane country, where the crop grows for ‘as far as the eye can see’ and where masses of miniature train tracks for transporting the stuff, criss-cross literally all over the place.
Bundaberg also gave L another fix, that of history and (his favourite all time word) heritage. “Bundy” as it’s called by locals was the home of the pioneering aviator Bert Hinkler and now standing in the centre of the town’s botanical gardens is Bert’s, quite plain, visibly British, 1920’s house. As it turned out, a 3 strong Aussie team saved the house from demolition back in the 80’s. After dismantling the house brick by brick they shipped it over to Australia and reconstructed it where it stands today, in memory of a chap they obviously feel quite passionately about. The two story brick and pebbledash, slate roof house, stands in contrast to the single story timber, crinkly tin roof Australian homes we’d gotten used to seeing. 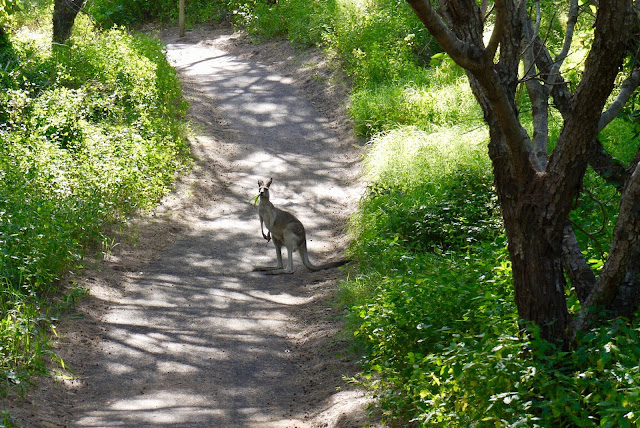 We had a quick stop at Mon Repos beach which would have been more exciting had we arrived a few months ago, where in hatching season you can watch the baby turtles scurrying down the beach and into the sea. Having said that, it was still worth the minor detour because during our walk a baby kangaroo and it’s mother hopped out from the bushes right in front of us. We also came away from the visitor centre having learnt that a turtle’s gender is determined by the temperature of the sand that the egg was laid in! Pretty impressive. Also, after spending the first 17 years of their life floating with the ocean currents, an adult turtle will return to their own place of birth to breed, using the Earth's magnetic field to navigate! We both concluded that L could do with this skill as he struggles to retrace his own steps most of the time. 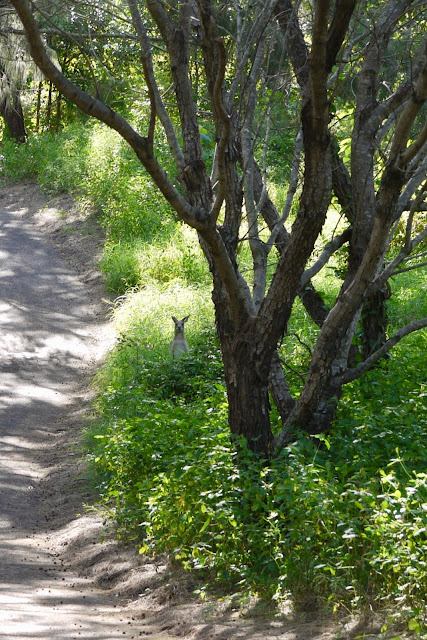 We hit the town of 1770 (the first time either of us had been to a town who’s name only consisted of numbers), named so because it was the year Captain Cook made his second landing on Australian soil and the first on what would become known as Queensland. Here marked our entry into the underwater world of the great barrier reef. With the G.B.R being so damn huge (stretching 1400 miles down the Queensland coastline) and with conflicting read ups leading to both L and myself drawing no conclusion as to where the absolute best spot to dive/snorkel is, we came up with the idea of trying to experience the G.B.R in 3 different areas. Once on the southern reef, then further north around the Whitsunday Islands at the heart of the reef, then onto the northern area of the reef around Cairns.
We had read that in the southern G.B.R Lady Musgrave Island, having it’s own sheltered reef lagoon, was a good place to snorkel. With only two companies licensed to take people out there, and with one currently being out of action, it really narrowed down the options. After a bit of negotiating for a student discount in absence of any student documentation, we donned our mortar boards and joined the 40 person cruise out to the Island the next day. 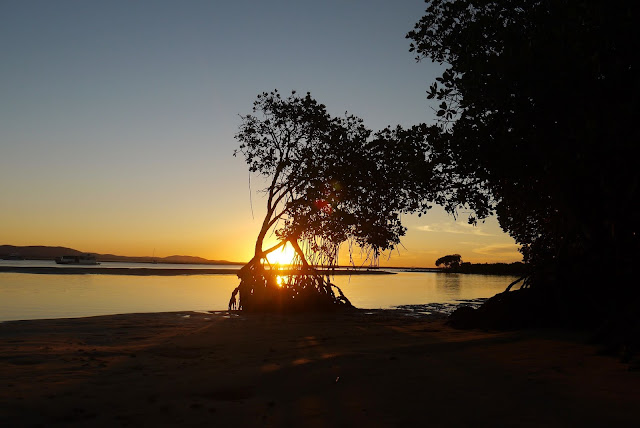 Onboard our fully enclosed, air conditioned boat, we received a safety briefing which focused mainly on the correct use… of a sick bag. L and I held back the smirks, blissfully ignorant to the trip ahead. We weren’t long into the trip before a number of people started looking a little green, the sounds and smells of passengers vomiting soon followed and our vessel transformed into an air tight vomit box.
Compared to a number of choppy boat trips, namely one crossing from Jersey to Sark a few years ago and a more recent one leaving the small island of Koh Rong Samloem for Cambodia’s mainland (the penultimate day of our S.E. Asia trip when we nearly capsized, blog post #35 ), we both thought this crossing seemed relatively calm. Unfortunately for us, the number of vomiting passengers kept increasing exponentially.
L was familiar with the feelings currently being experienced by the majority of the passengers, having himself been sea sick into the double figures on a single sea fishing trip 10 years ago. Today though, neither of us would be offering any sympathy, the re circulating air was itself now nauseating and we still had 1h20mins of this traumatic journey left to go!
There were 4 sick bags in the pocket of each seat and some passengers had already used up their allocation and were urgently requesting more. L and I watched as vomiter’s passed their used bags over to a gloved crew member who leant in to take receipt of the package. The exchange literally happening in the face of whoever was unfortunate enough to be sitting in the isle seats. Our observations concluded that the safety briefing focused too highly on the correct use of a sick bag and in doing so had actually normalised the action of vomiting. Along with the actions of: vomiting in the presence of others; vomiting without the need to get out of your seat and go to the toilet; wrenching and throat clearing after vomiting; and passing your used sick bag across the stranger who is sat next to you.
L was managing fine until the overwhelming smell from the guy behind us who was now filling his 6th bag, got too much and made him start to feel queasy, he closed his eyes and leant back into his seat. For any late Rik Mayall fans who’ve seen the film “Guest House Paradiso” and can remember the scene where all the guests become ill in unison after eating the radioactive fish…. 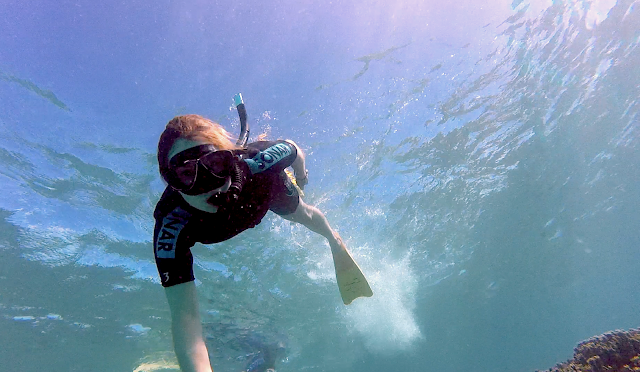 Once at the pontoon the day got better for everyone, I imagine in particular for the 35 passengers who’d been continually ill for the last 1h20. The coral was good but not as good as areas we’d already seen in Thailand and this was coupled with not so perfect visibility but we did get to see plenty of colourful fish and amazingly some turtles which was great. 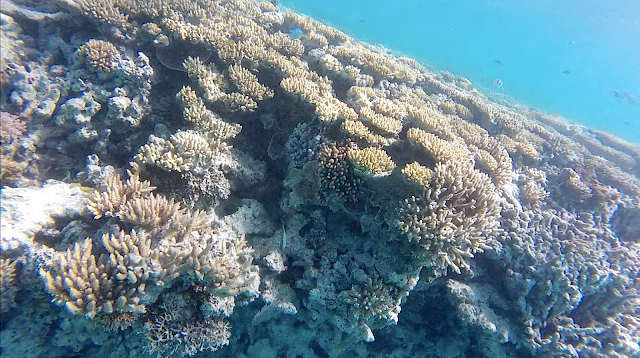 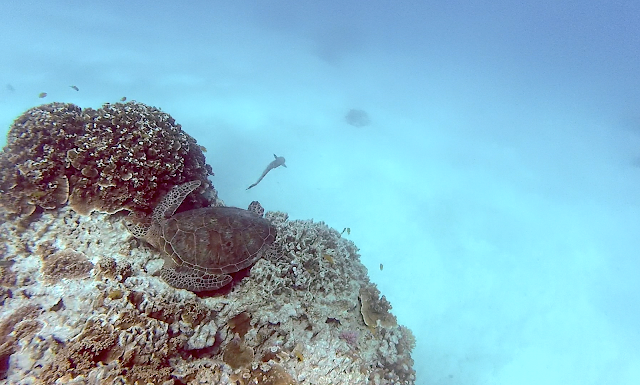 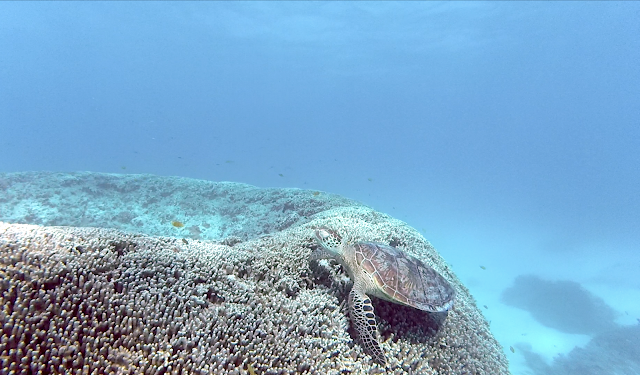 The tour of Lady Musgrave island, after a coral viewing tour on the glass bottom boat, was quite interesting because the island is made entirely from dead coral which over time has been deposited there by wind and movement of the water. Apparently it’s also a good place to spot Manta Rays but sadly we did’t see any. We were however, chomping to get back to the pontoon for further snorkelling…… and lunch. L filled his boots at gave the buffet a reasonable the 7.5/10 and bagged a further 6 scones for the return boat trip. This everyone had been assured, would be a lot smoother ride back. Unfortunately L ended up sitting on an isle seat and next to the only ill passenger on the return journey, and so those scones never made it out of the rucksack. 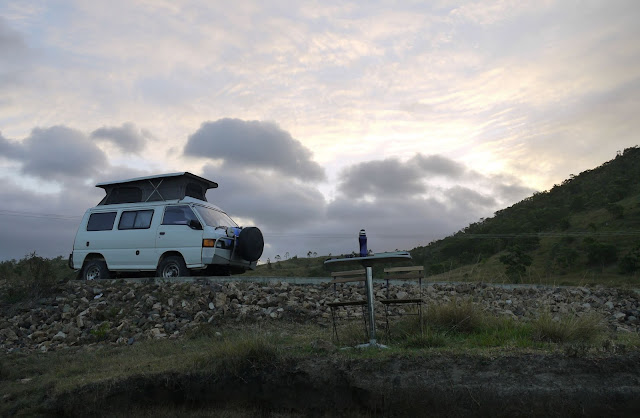 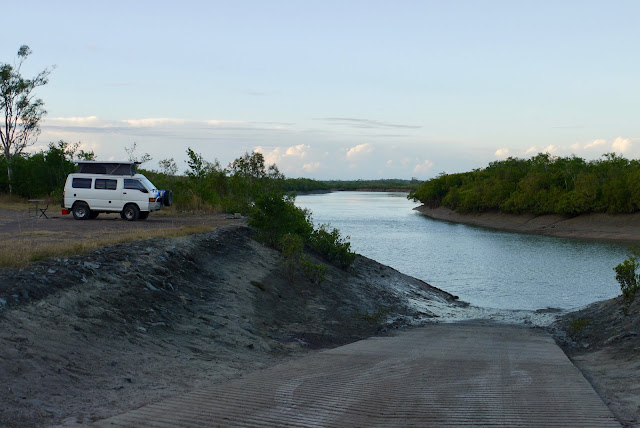 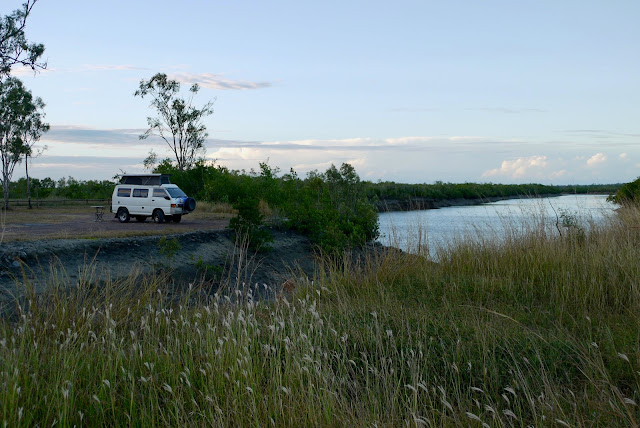 Back on the mainland after an eventful boat trip out to the G.B.R we found ourselves very much in croc country, highlighted by yellow signs which were popping up more frequently. Keen to spot a croc or two in the wild, we decided to free camp the following couple of nights at two different spots, both near boat ramps and close to the rivers edge. L and I stood one evening watching the sun set, unsuccessfully surveying the river (from a safe distance) for crocs when suddenly Elton John’s ‘Crocodile Rock’ came blasting over the air waves. A fellow camper had just turned on the radio and of all the songs to come on this was it. L and I thought this hilarious and hoped the next song to play would be Jimmy Nails’ 'Crocodile Shoes’… unsurprisingly it wasn’t. As it started to get dark we clambered back into the Crampervan, continuing our croc search and using for the first time, the spot lights retro fitted to the van. Still no crocs. Instead wait to hear about our shark encounter in the next blog post where we also take to the skies in a sea plane to view the heart of the G.B.R from above, and land out on the reef to experience some amazing snorkelling and encounter some monster sized fish! I had intended to include the above in this 50th blog post, but with so much to write about and handfuls more spectacular photos to include, it will have to wait until the next post...

NEXT UP: The Heart of the Great Barrier Reef and the Whitsunday Islands…. 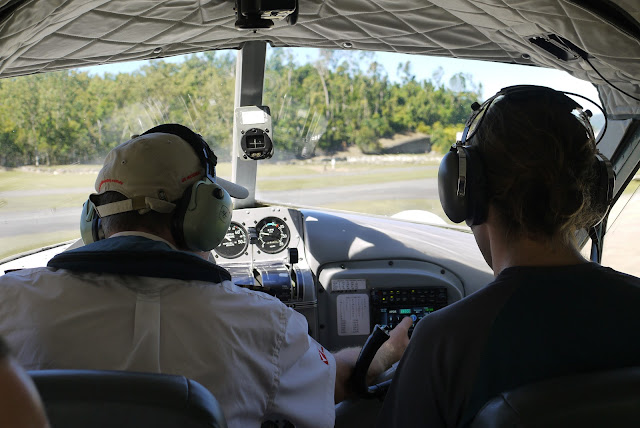 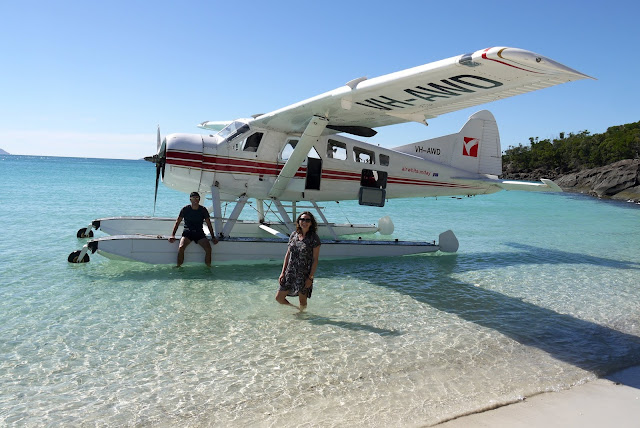