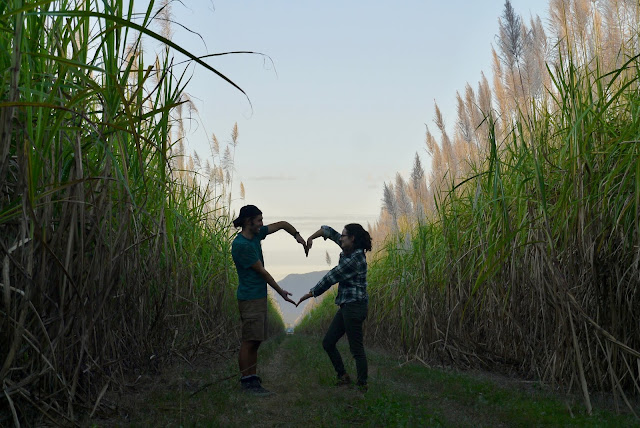 Lets rewind…Prior to the previous blog post (#51), L and I travelled a stretch between leaving 1770 (the town of just numbers) and arriving at Airlie Beach and the Whitsunday's region. This small section of our somewhat mammoth route around Aus got missed out from the end of blog post #50 and I feel it's worth a recap....
Mainly because upon reaching Gladstone, L made a shocking discovery: We had actually travelled as far north up the east coast as ALDI had yet to venture in Australia! After which it would take us approximately 5 months and 6000 miles to reach the next closest store…which would be when we dropped down into Perth! Shock Horror! For a moment the world stood still as L and I contemplated how we would survive the coming months without a few of our key Aldi staples. It was at this point we made the decision to stock up, filling every spare nook in the Crampervan with Aldi treats. If in the mean time anyone would like to send us regular care packages whist we venture 'across the top' please address to: L & N, The Crampervan, On the road, somewhere in Australia. Appreciated. 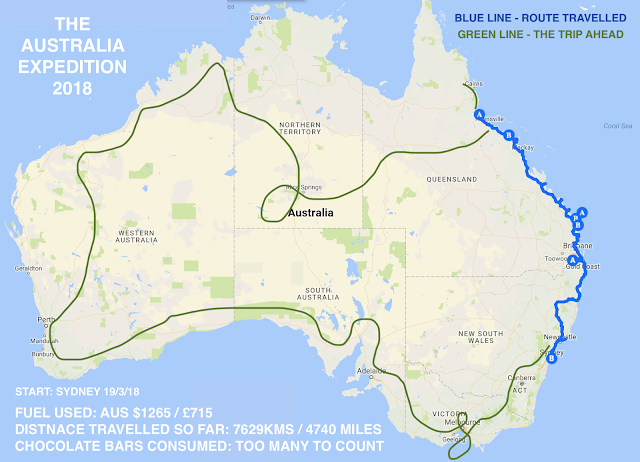 The other reason for re visiting this section of our trip was because of the following: In preparation for arriving in the Mackay region, L had read that there was a good chance of seeing wallabies feeding on the beach at sunrise. We both thought this sounded pretty idyllic and so dragged ourselves out of bed the following morning, skipped breakfast and drove to the beach, thinking we’d be amongst perhaps only a handful of early risers with the same idea. It would appear not. We stepped out onto the sand to find a large cluster of people watching a handful of wallabies. We had wondered what it was the wallabies would be eating on the beach, as we walked closer it became clear. A lady in some sort of scout uniform acting as group tour guide, stood next to a row of cones which she’d placed to separate humans and wallabies. The wallabies not at all phased by their human audience were sat, eating from the individual feeding mats that had been put down in front of them… It was a bit confusing as to whether the wallabies would naturally be on the beach to feed in the morning, or if they were there from learnt behaviour as a result of this tourist thing. We left somewhat disappointed but on the face of it, both wallabies and humans seemed to be enjoying their time together harmlessly. A couple of renegade wallabies wandering the beach close by hopped around long enough to allow those wanting a photo without the feeding station, the chance to grab one. 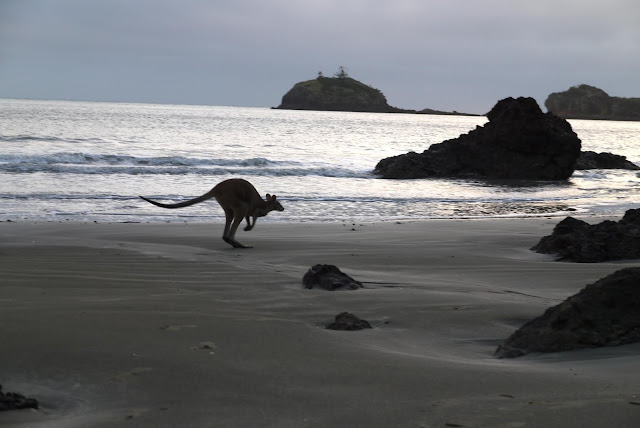 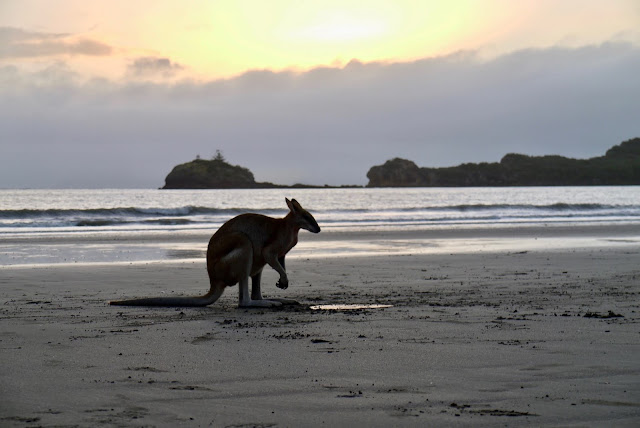 Now lets fast forward… to how L and I came to spend 3 weeks living in the middle of a cane field! (If you haven’t read the previous blog post #51, catch up now!)

We’d left the Airlie beach and Whitsunday region behind in somewhat of a hurry. On our last morning I'd exited the shower cubicle of the shower block and found I could hardly see! The cause was not from the steam created by the insanely hot shower, or because my glasses where covered in water, but instead because of smoke. My first thought was yikes there’s a bush fire, but once outside the shower block the reason behind the smoke, which now engulfed the whole campsite, became obvious. The new owners to the once nudist campsite, had armed themselves with flame throwers and had started setting fire to the leaf and branch piles dotted around the campsite! L was hastily taking in our washing off the line when I got back to the van and he could sense how infuriated I was. How moronic are some people?! If you’re planning to smoke out your guests, at least give them a heads up before you start spraying the ground around them with fuel. My just washed hair now stank of wood smoke, along with all of our just washed clothes and just washed bedding, and I imagined everything inside the not just washed van would do too; the curtains, the seat cushions, our clothes. I was thankful when this turned out not to be the case. So that was how we came to leave the Whitsunday area pretty swiftly, and if I hadn’t been short of breath I’d have marched over to retrieve my $4 deposited in their honesty box for the use of the washing machine. 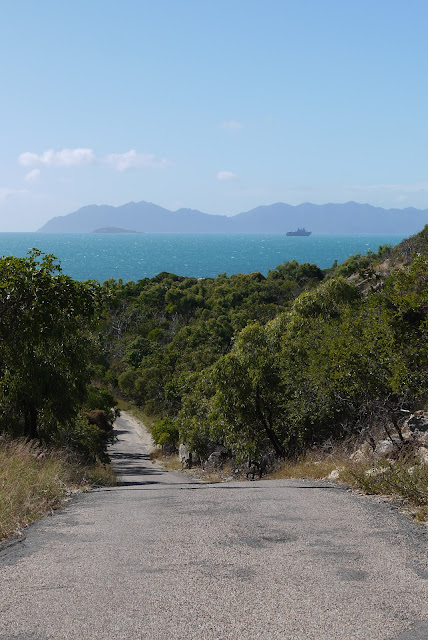 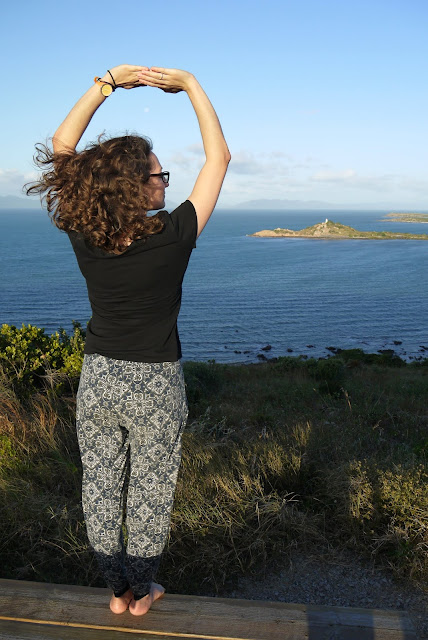 We got the Crampervan’s tyres re balanced and rotated in Bowen for their longevity and took a dip in the sea with our snorkels. Sadly the visibility was poor which was a shame because we’d read that Bowen is one of the few places on the mainland where you can actually swim out to reef directly from the beach. Poor visibility resulted in our minds playing cruel tricks on us, mainly in bringing up scenes from Jaws which resulted in our swim and snorkel being pretty brief.
Bowen, with it’s ridiculously wide streets, is also home to a gem of a cinema made famous when Baz Luhrmann used it to watch back footage he’d shot, whilst the town was being used as a film set for parts of the movie ‘Australia’. L and I took a trip to the little art deco cinema one evening to watch ‘The Guernsey literary and potato peel pie society’ which despite it’s ridiculous title was actually quite a good film. A little cheesy in parts, perhaps due to featuring half the cast of Downtown Abbey, but it was worth the watch... and experience. Never before had we experienced a film interrupted by the sound of rain, clanging on the cinema’s tin roof as a thunderstorm passed briefly overhead, that was a new one! Both L and I had grown a soft spot for Bowen’s beautiful beaches and surrounding hill top walks. We found the town itself, where tumble weed wouldn’t look out of place on those vast open streets, had in it's own way, a strange charm. 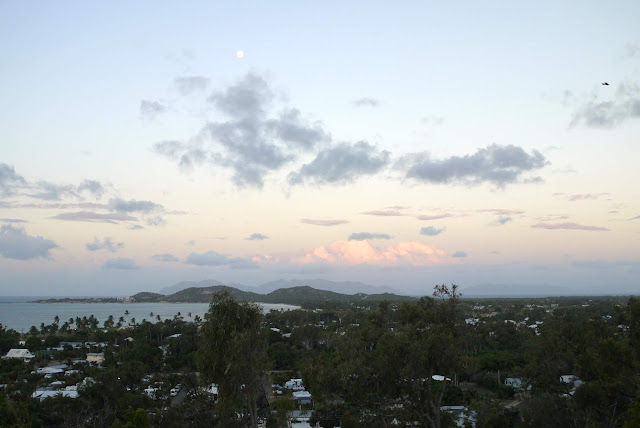 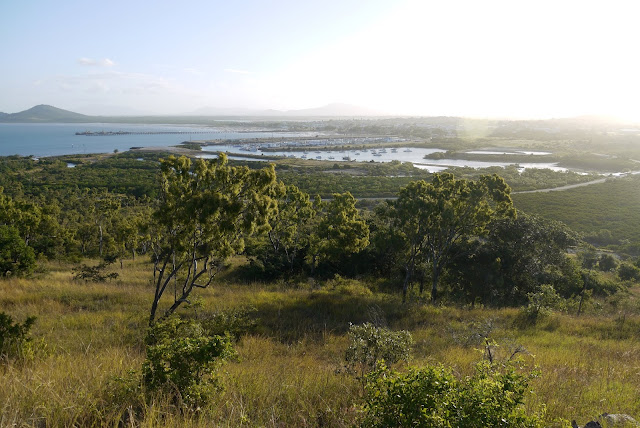 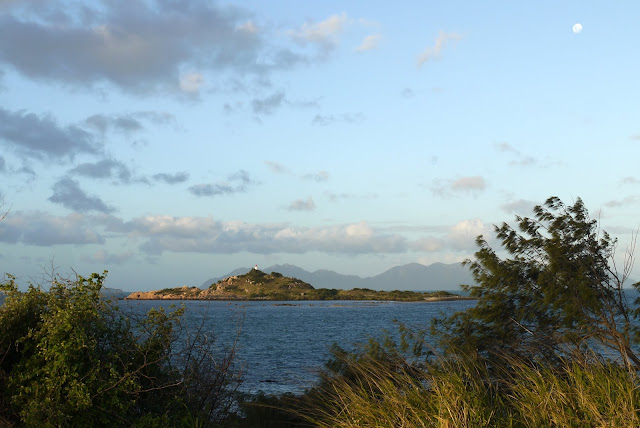 L had been browsing gumtree for a second hand solar panel when he stumbled across an ad for farm work (more specifically a position mustering cattle) on a farm near the small town of Ingham. Ingham sits on the highway between Bowen and Cairns, conveniently  along our planned route north and so it was only a couple of days later that we found ourselves sat in the Crampervan infront of a semi automatic farm gate.
Padded foam taped along the bars approximately the width of a car suggested we needed to drive into the gate. So we did, pushing it open until it swung all the way… and then started to swing back. Luckily it only swung a couple of feet back before abruptly stopping. This was the automatic part of the semi automatic gate kicking in. Phew! We’d come to do a recce of the farm and so continued the 2km along a dirt track until we arrived at a yard.
As previously blogged about, we had found that Aussies do everything on a large scale  and farming was another example. The first thing we noticed in the farm yard was the barn that housed a helicopter and a couple of boats, the next barn was home to an array of dirt bikes, quads and some sort of large dune buggy thing. First impressions were good and the romanticised idea of playing modern day cowboys and getting paid for the privilege, was super exciting! 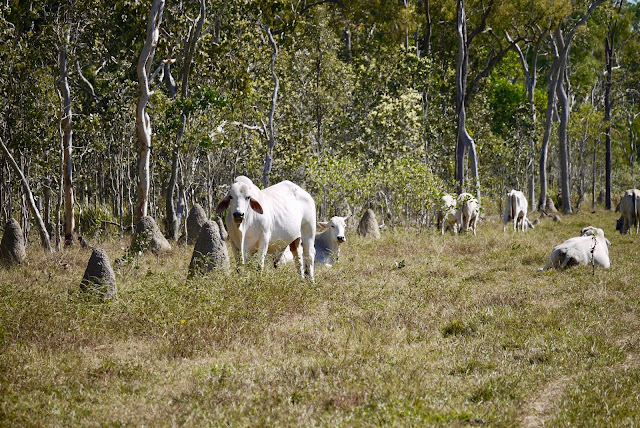 Then the balloon popped... It transpired the cattle mustering position had since been filled but the farmer was quick to place a counter offer on the table. He could offer one of us some part time work helping with the muster followed by some part time work re-decorating the farm house and over on their sugar cane plantation, his brother was looking for a tractor driver to fill in for three weeks. As L had more experience driving farm machinery, the who would do what, was predetermined and this was how we came to live in a cane field. 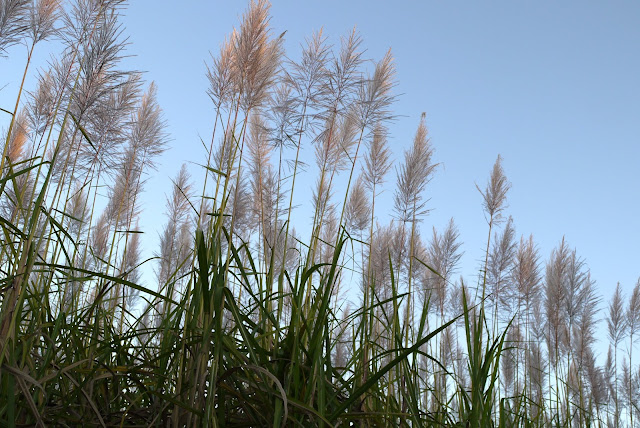 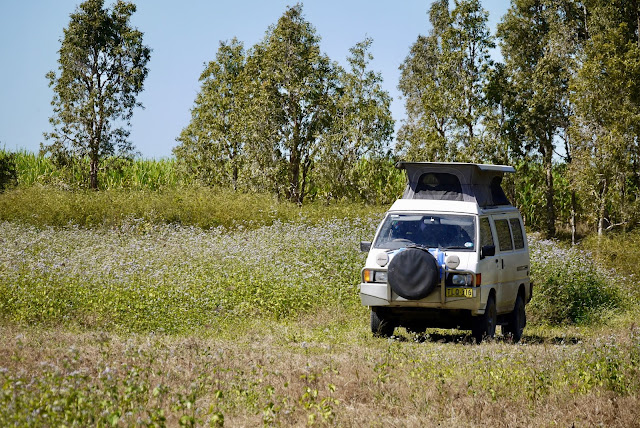 We’d chosen a picturesque grassy spot on the edge of the cane to park the Crampervan and call home for next 3 weeks. Our spot was somewhere along the dividing fence line between the farm’s cane plantation and the wooded bushland for the cattle beyond. A 5 minute drive (or a 10 minute walk some days) up to the tractor shed and his waiting John Deer, via a track between cane fields had become L’s daily commute to and from work. 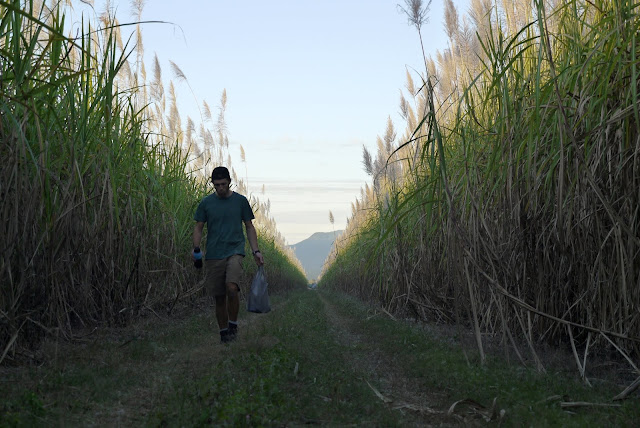 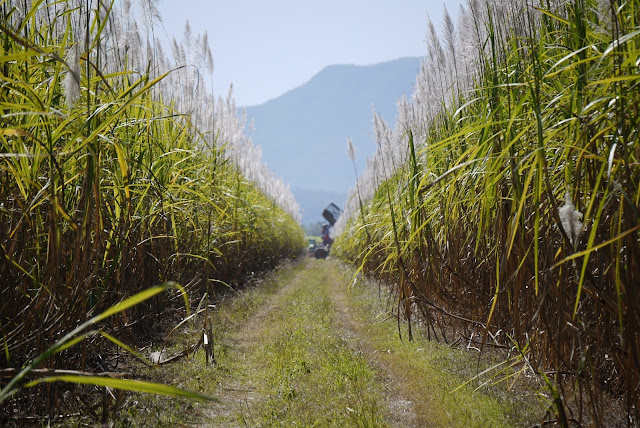 On the days we were both working it was an early rise in the Crampervan, so I could do the 25 minute drive over to the cattle side of the farm after depositing L at the tractor shed. If I wasn’t working I usually headed into Ingham and parked up for the day at the TYTO wetlands reserve, where a collection of Lilly pad filled lakes were home to turtles and a ton of birds. My preference was to sit at the picnic benches by the lakes planning the rest of our trip, writing the blog and sorting through photos but now and then I’d stretch my legs on the board walks and trails through the wetlands, slapping at the mosquitos as I went. Occasionally I’d spice things up by going off for the day to explore the locality, but in the absence of L, I felt slightly guilty. Whist I’d be out having fun, L had migrated from evening confinement in the Crampervan to the further daytime confinement within his air conditioned tractor cab. What L had realised just 2 days into his job, was that driving in straight lines up and down the most mega of cane fields for hours on end, was simply boring and that no amount of radio, music or audiobooks would fully disguise this. The novelty had already worn off and whilst the work was well paid (we estimated our 3 weeks would likely pay for the next 3 months of travel) L was worried it was starting to tarnish his love of everything tractors… 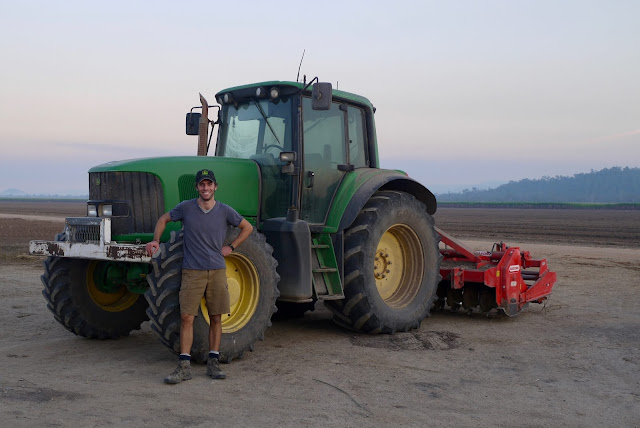 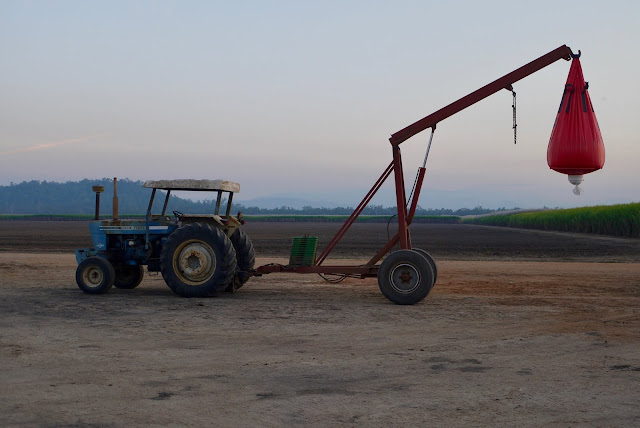 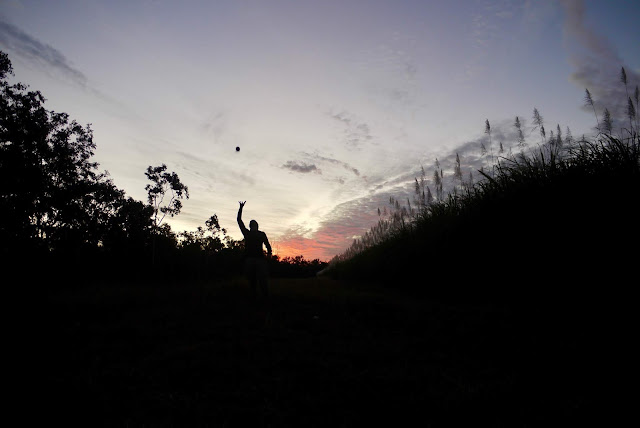 Over on the cattle side of the farm, the muster was underway and I was called in to help for a few days. The farmer was up in his chopper and in constant comms with our 4 strong team on the ground. Little did I know but L, over on the cane planation, was also secretly following the muster, having tuned his tractor radio to listen in! 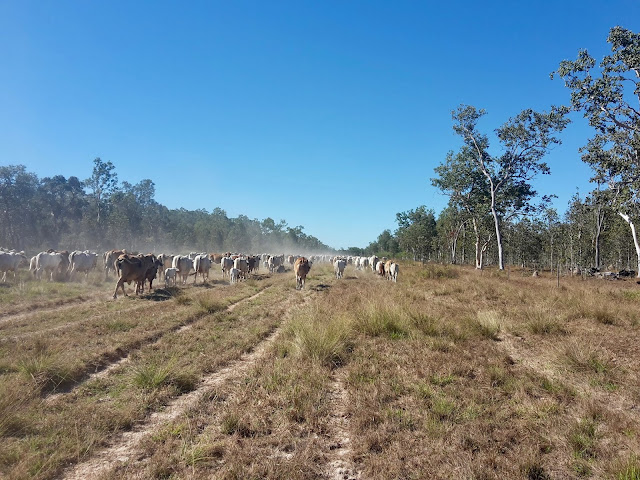 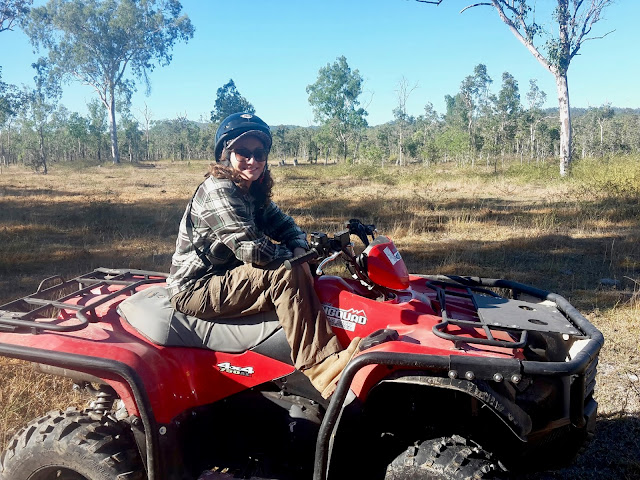 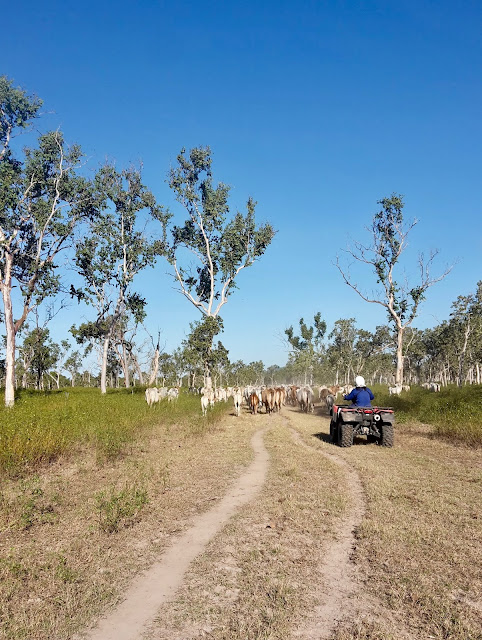 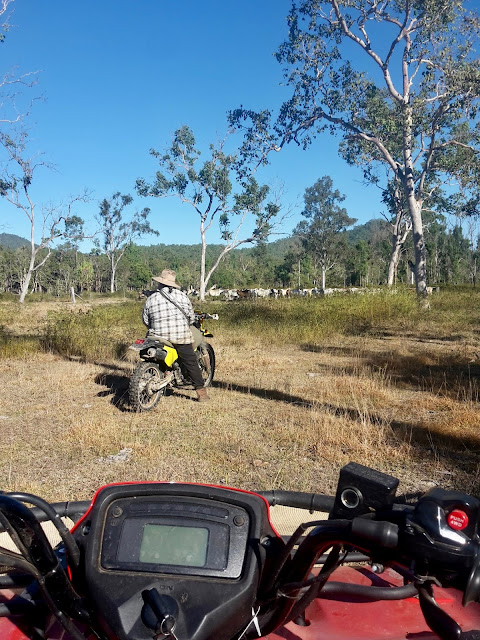 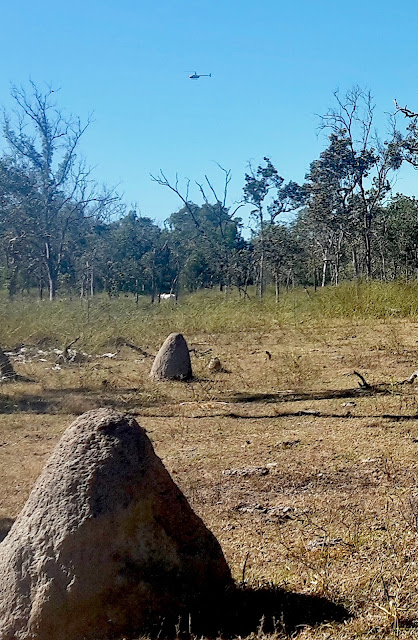 NEXT UP > A long weekend around Cairns and the Atherton Tablelands and how to make the most of an “all you can eat and drink” chocolate and coffee experience! It goes without saying that we did this one justice....