55. DRIVING THROUGH THE OUTBACK TO ALICE SPRINGS CONTINUED.... 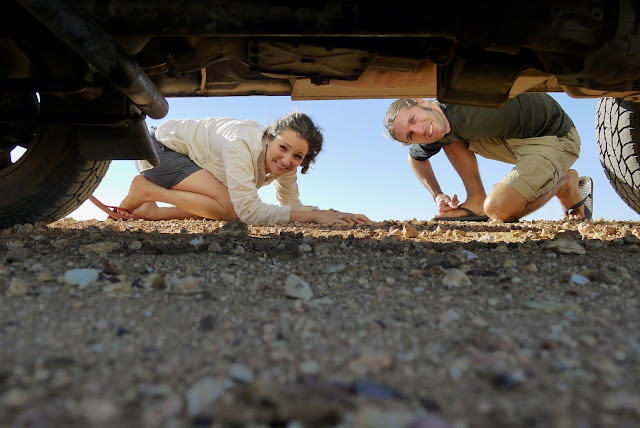 Taking our sign posted, impromptu short cut had meant that the rest of our planned route had altered slightly, no longer were we heading south to Boulia and west from Boulia to Alice Springs, in fact Boulia had been ditched entirely. Two things Boulia is known for are the Min Min lights (eerie, unexplained lights sometimes spotted around the area, coincidentally also spotted in Mickley, UK) and the annual camel racing championships. L and I were unsure if it would be cool to see the min min lights whilst driving in the outback, or if such a spectacle would scare the pair of us senseless, we never got to find out. We thought the novelty of watching the camel races would be highly entertaining however with the races still a couple of weekends off, we’d have missed the event regardless.

Our gravel road short cut wasn’t proving overly bumpy and the landscape was flat for as far as the eye could see in all directions. We were surprised to discover that our first human contact on this stretch was not the wave of a fellow 4x4 driver, but an intentional dive bombing from a light aircraft!
I’d spotted the plane in the distance out of the passenger window and watched as it changed course and began approaching us square on from the side, all the while getting continually closer and dramatically lower in the sky. Of the hundreds of square miles of surrounding expanse, we were a little surprised that the pilot was choosing to land his aircraft across the stretch of road that we were travelling. Our paths were about to cross and at this point both L and I agreed it would be advantageous to slow the Crampervan right down to avoid being wiped out. It seemed the pilot had counter reacted to our slowing down because our collision course remained still perfect. My window was down, L was still driving but both of us were looking out of the passenger window shouting expletives as the pilot flew the little plane directly overhead, barley 20ft above us. We’d just been dive bombed by a light aircraft, this was a first for the both of us and I expect also a last. He wasn’t landing at all, just playing chicken with a moving target in the middle of the outback. The little plane pulled up higher into the sky and banked to the right. I can’t imagine this being an experience we would ever encounter again. After overcoming the initial shock L and I spent the next hour laughing at what had just happened. 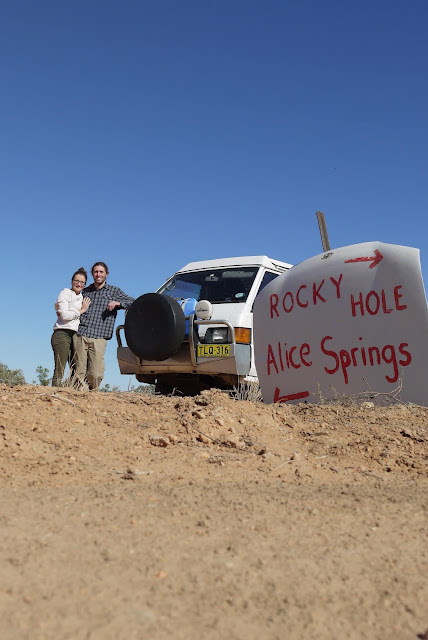 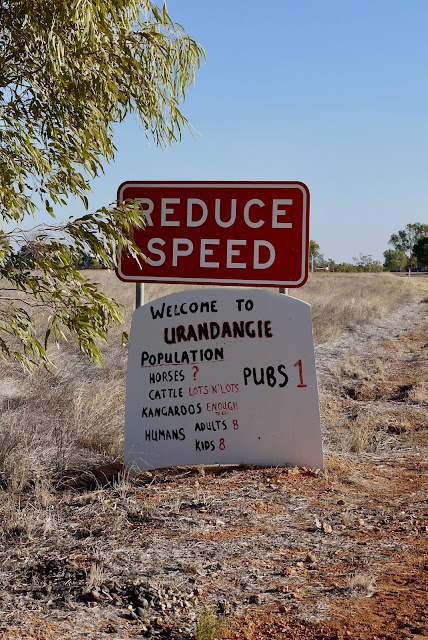 This wasn’t the only Aussie humour we would be sampling that afternoon, ever since commencing our detour we’d been driving past propped up car bonnets which conveyed varying messages. You know you’ve gone remote when the road signs are replaced with car bonnets! The last bonnet sign we passed advertised “Warm beer, shit service, and unfriendly owner. Road house in 20km”. There wasn’t much at Urandangie other than the advertised road house (pub). A handful of houses and a large amount of decaying machinery, engines and cars, were dotted across dusty grassland. 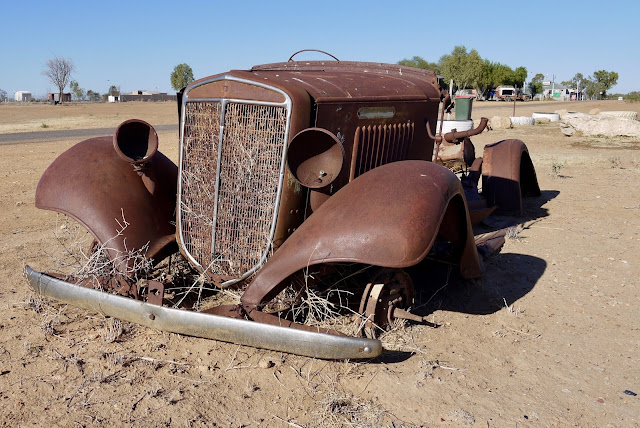 A previous bonnet sign had welcomed us to the town and shared some informative settlement statistics. As we sat stationery in the Crampervan deciding if we were going to drop into the road house for one of those warm beers, a lady appeared outside of the driver window. Window lady was not the owner of the roadhouse but a satisfied patron who expressed great enthusiasm for the place and beckoned us to stop, as she had herself when passing through two hours earlier, so we did. This turned out to be the most brilliant of decisions. 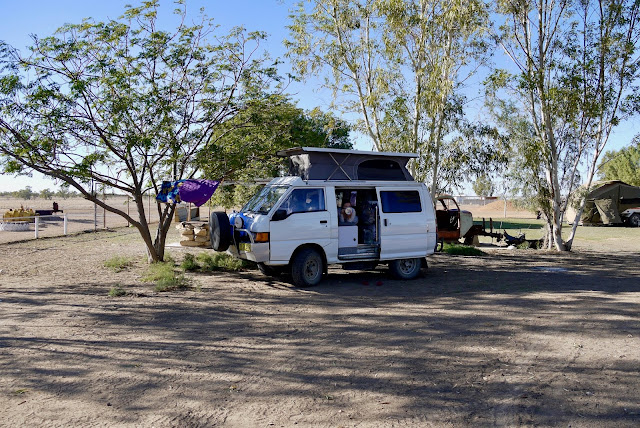 We parked the Crampervan out the front and headed into the bar where we were greeted by a older lady with a sense of humour, she was the owner of the road house and creator of all the bonnet signs we’d been passing. A quick drink turned into one nights free lodgings and we moved the Crampervan around the back into a fenced area by the side of the road house. We’d thought the fence was to keep a rather cute miniature pony from wandering loose until we saw another rather cute miniature pony walking up the centre of the dusty street! We were told the fence was to keep the many other wandering miniature ponies away from the one within the fence because they didn’t get on. This place was already feeling like a town straight out of an old Western film. Cue the cowboys… and lots of them. Arriving from a ‘nearby’ cattle station were 30 or so Jackaroos who’d just finished their cattle muster. It was Friday night and this little road house in the middle of nowhere was the place to be! 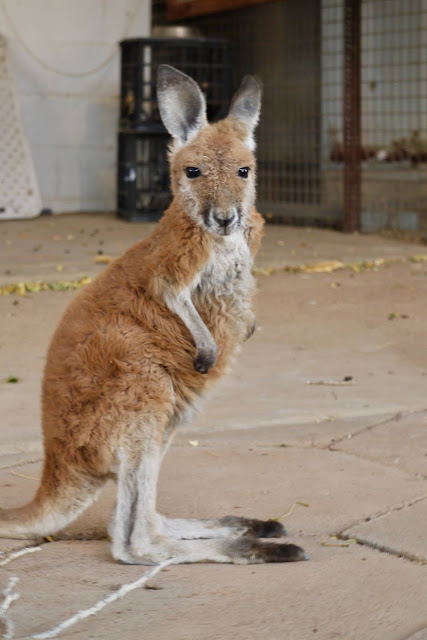 Road house lady had another surprise up her sleeve and beckoned the pair of us to follow her, why or to where, we were unsure. She led us behind the bar down a dark corridor and into what appeared to be her living room, where she then proceeded to rummage through a laundry basket full of blankets. Both of us were looking at each other a little confused. Suddenly all became clear when out from under the blankets popped two tiny Joeys which road house lady thrust into our arms. It turned out she was the local baby kangaroo and wallaby rescuer and there were plenty more of these guys hopping around in the back yard! This made navigating to the outside toilet across the back yard, like walking through a petting zoo. 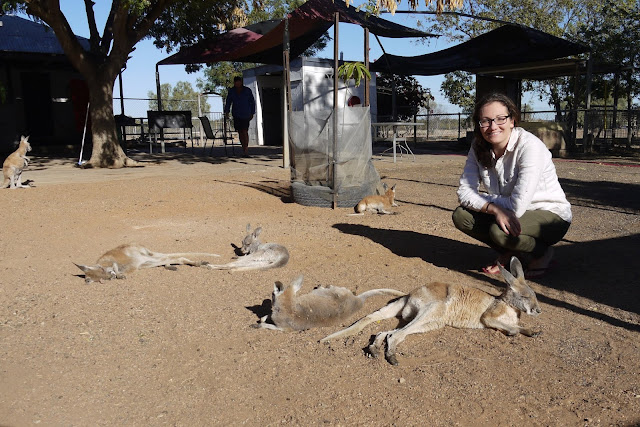 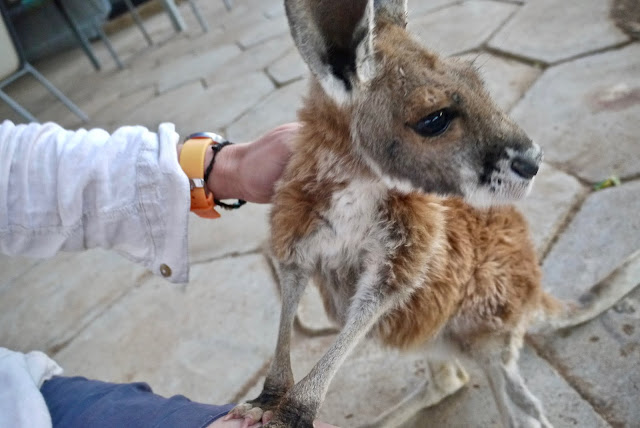 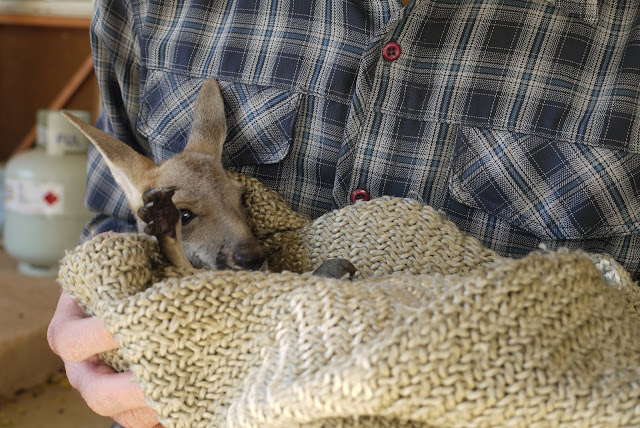 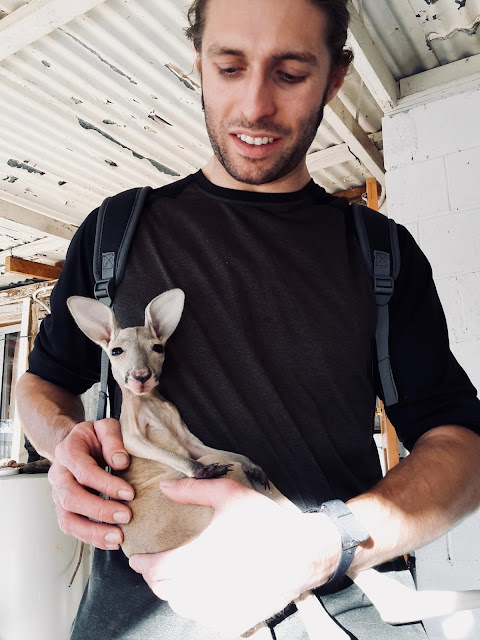 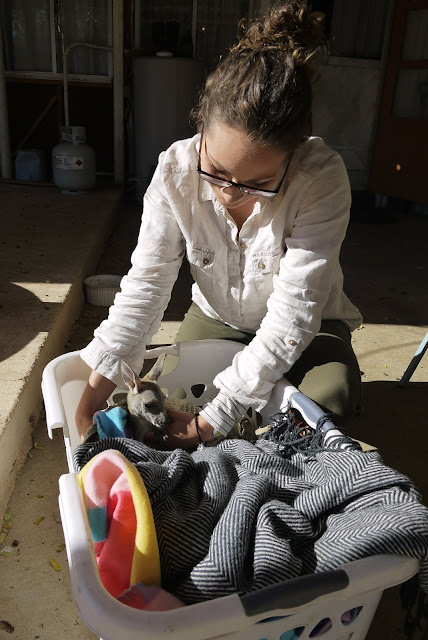 After a plentiful amount of kangaroo cuddles we headed out of Urandangie and continued along our short cut until it eventually joined with the Plenty highway. The Plenty highway (don’t be fooled by ‘highway’) cuts west through the outback to Alice Springs. We’d anticipated this part of the journey would be somewhat ‘rattling’ but let’s just say that both of us were thankful that our impromptu short cut had shaved 170 miles off driving the full length of the Plenty because it was ROUGH! Every part of the van vigorously and continually shook for the next two days. The cooker made a constant high pitched rattle and squeak and at one point it completely jumped out of it’s housing. A cord wrapped around two particular door handles (which had a tendency to fly open) had solved an earlier contents projectile situation. The continual pounding of the suspension and visible vibrations of the steering wheel, steering column and dash were fairly alarming but the most hilarious part of the ensemble was that of the moving and clapping of the van doors against the van body. 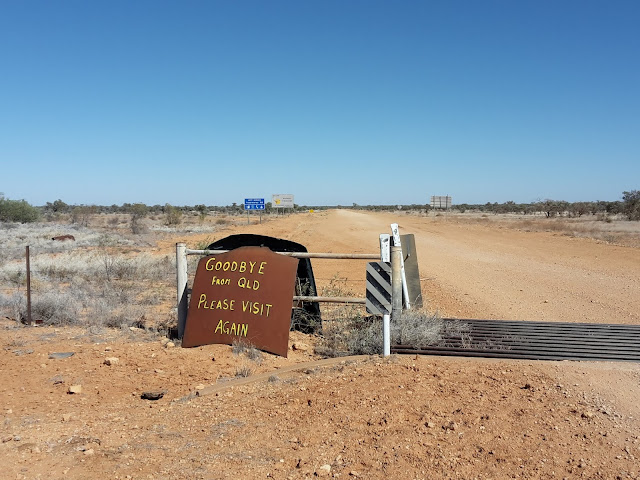 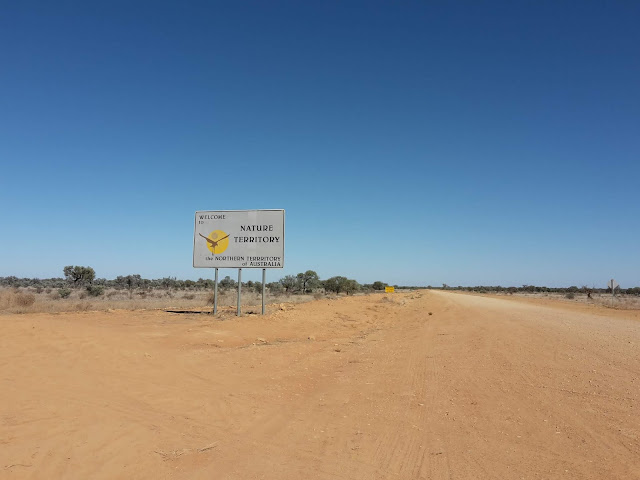 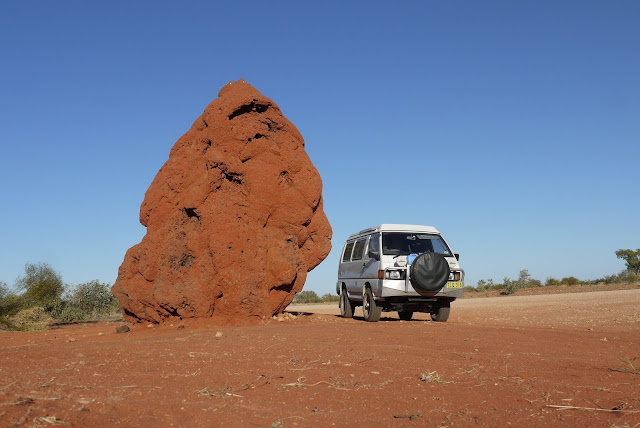 Over a bumpy two days we found ourselves with ‘plenty’ of time to test theories for reducing the vibrations. We found it more rattling to drive faster over the corrugations than it was to drive slow. Although I believe it is possible to float over if you can drive fast enough, not recommended because your steering will be compromised. We settled on continually chopping and changing road position so as to drive in the least corrugated path even if it meant being on the wrong side of the road or completely off the road! In parts it was generally a smoother ride to drive over the rocky verge than the corrugations on the actual road.
L and I concluded ‘The Plenty’ should stand for ‘the plenty of corrugations highway’. We eventually rolled back onto the bitumen about an hour out of Alice Springs and soon after the phone signal returned. This was well received and the van instantly fell silent (well almost). Both of us had developed a little ringing in the ears resembling that of an out of time and out of tune orchestra, this continued to annoy us for a while longer. 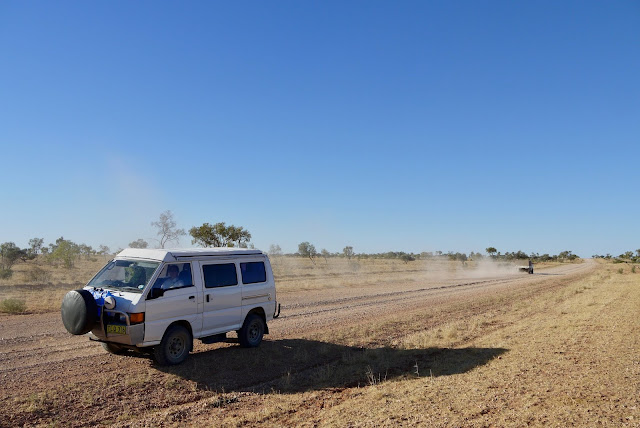 We’d arrived slap bang in the centre of Australia, although we later learned that the true centre of Australia is somewhat un-agreed upon, resulting in five ‘possible centre’ markers. It was from Alice that we were planning to drive a 1500klm (approx 10 day) loop known as the Red Centre Way. The route passes through the West Macdonall ranges and their many gorges, Aboriginal land for which we need a permit, the red cliff walls of Kings Canyon, Mount Connor and ultimately we’d land at Uluru (Ayres Rock) and Kata Tjuta (The Olga’s). There we planned to stay a few days, before driving back to Alice through the flat expanses of the red centre, but first... a couple of nights in Alice to re stock the van! 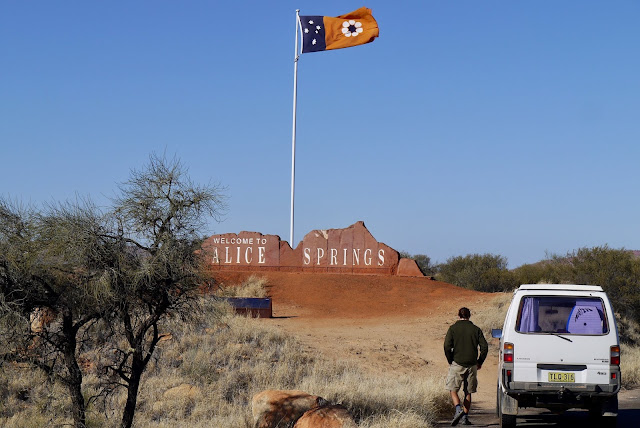 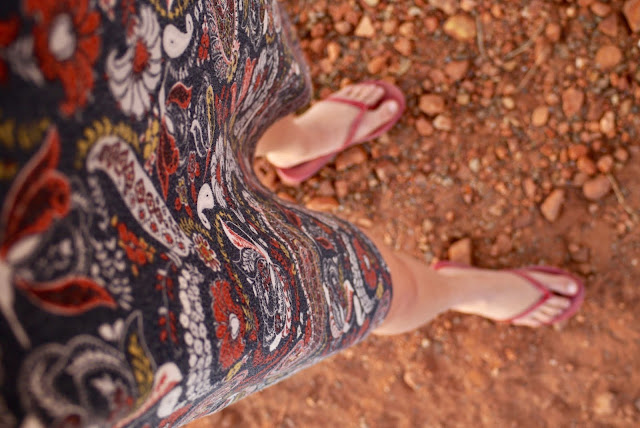