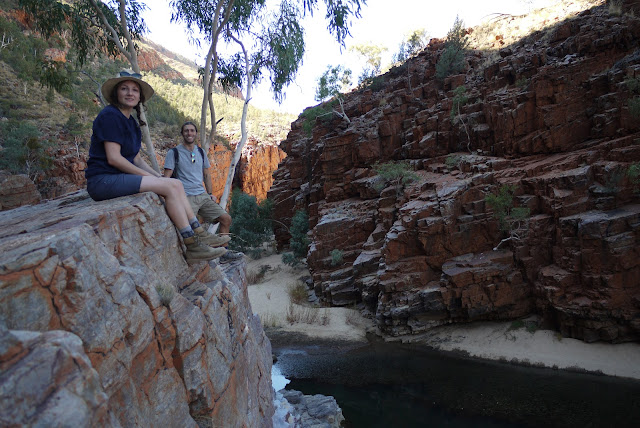 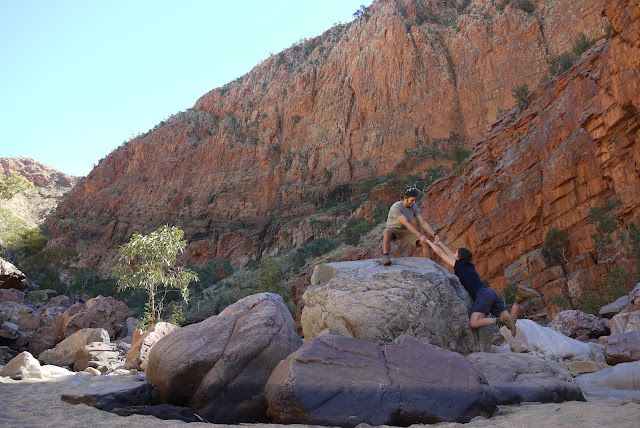 Oddly we found ourselves discovering that it was currently hotter back home in the UK than in the central outback of Australia, who’d have thought! Our evening temperatures had been dropping the closer we got to the centre of Australia and we were now experiencing almost freezing temperatures at night with the mercury climbing to around the mid to late twenties during the day, having said that it is winter over here.
Alice Springs wasn’t offering much when it came to free amenities. Forget free showers, you have to pay to use the toilets! Added to that there’s no free drinking water tap to fill up your van and the nearest free camp is a long way out of town, so we stayed two nights. This was enough to prep and stock up for our 10-12 day Red Centre Way (RCW) pilgrimage. 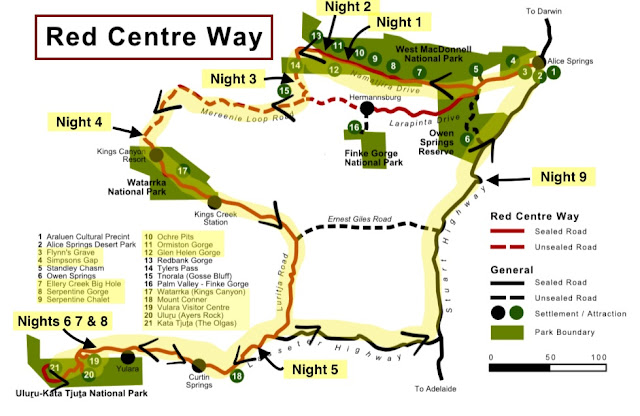 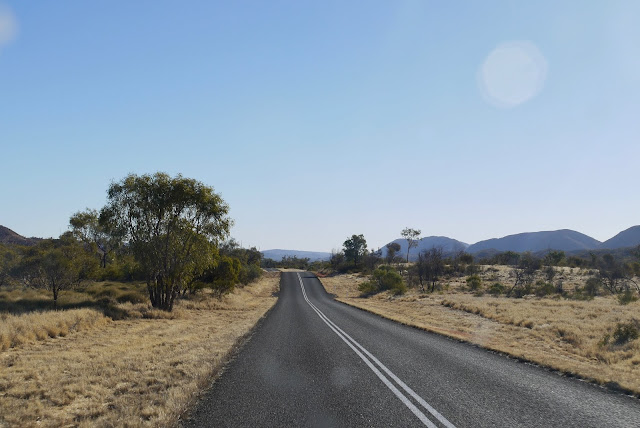 Heading west from Alice Springs, the first area of interest is the West MacDonnell ranges. We spend three days exploring the area, walking numerous trails through ochre pits, spectacular gorges and over mountain tracks. Our two nights free camping were equally awesome with  the sun setting over the stunning backdrop of the ranges. 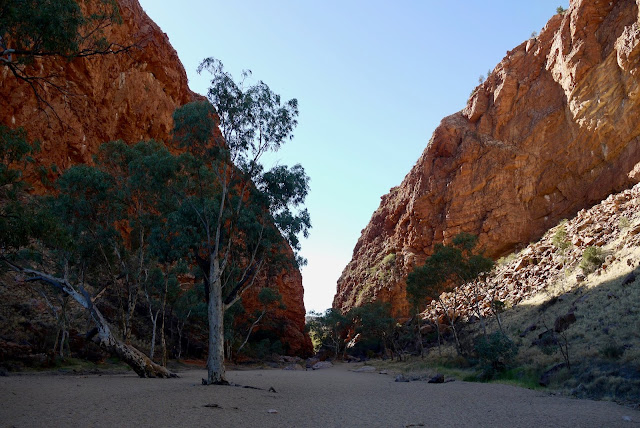 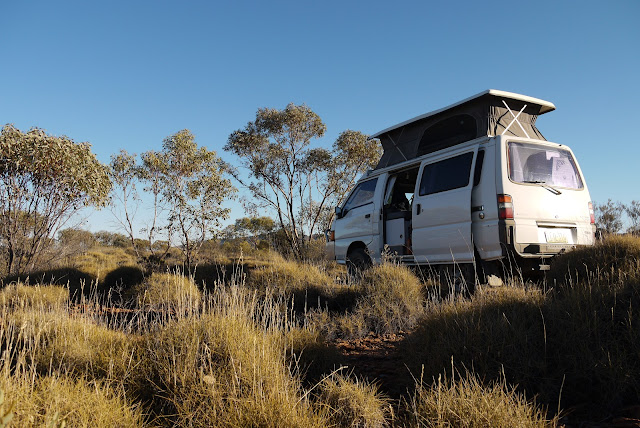 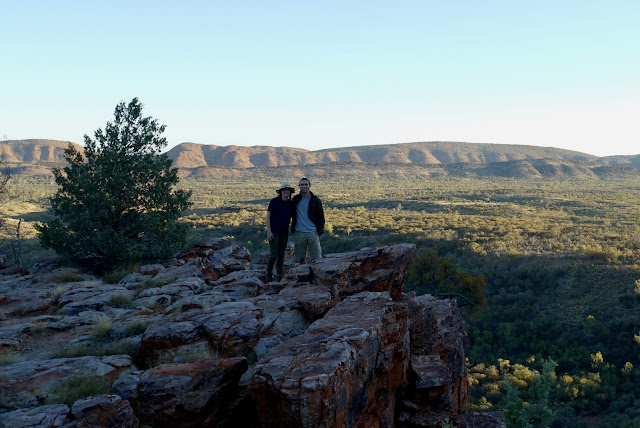 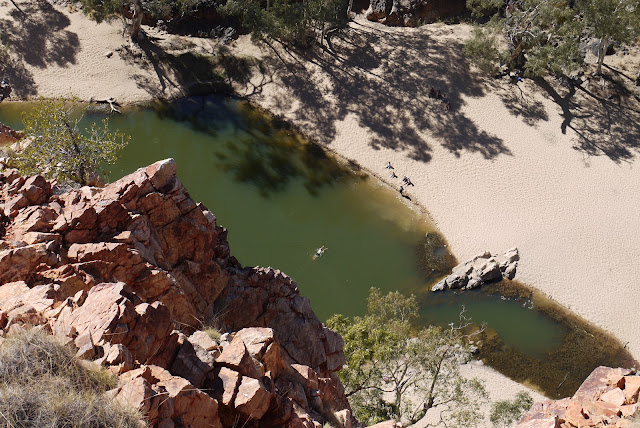 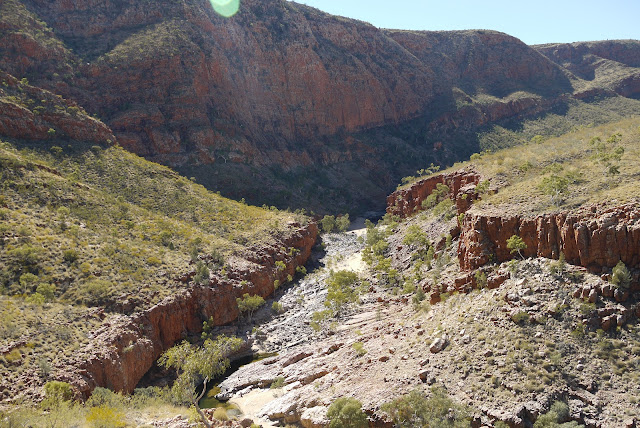 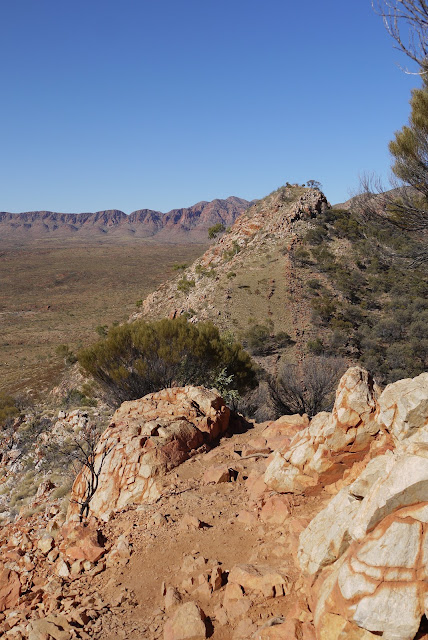 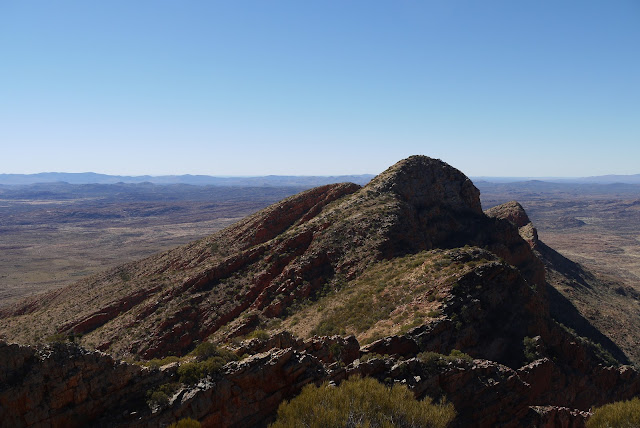 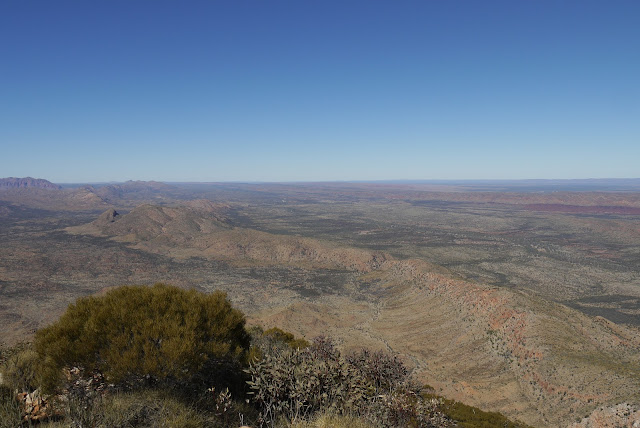 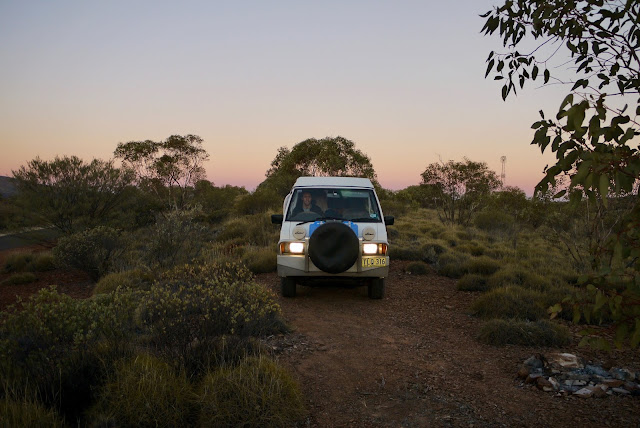 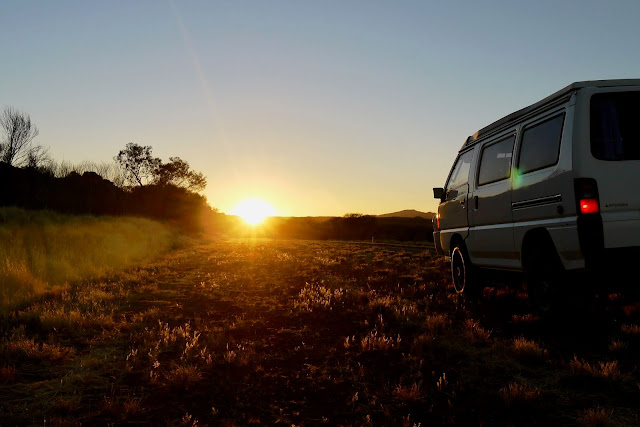 Towards the later end of the ranges as we continued west, an impressive jagged mountain came into view, it was by far the biggest and most visually dramatic we’d seen so far and naturally L instantly fixated on climbing it. We later learned that a 6-8 hour hike along a rocky ridge track made it possible to climb to the summit of Mt Sonder and so the following morning I found myself being dragged along the track by an enthusiastic L. Had the pair of us not walked the 5.5 mile Ormiston Gorge Pound Walk the previous day, I might have found myself with a little more energy. We’d agreed that I’d leave L to press on to the East summit after we’d both reached the lookout and had a spot of lunch. According the sign we’d see each other again in an other 5 hours so I was a little surprised when L surfaced back at the van only 2h45 hours later, mid way through my socks. Unluckily for L this meant helping me finish washing the remainder of our socks. The total climb had taken L 4h45 and that included our 30 minute lunch at the first lookout and his 45 minute rest at the summit. We noted that all of our walks so far had taken significantly less time to complete than the signage suggested and we weren’t going at any great pace (well I wasn’t), so we concluded that all Northern Territory National Parks signage is very generous on times, handy to know. 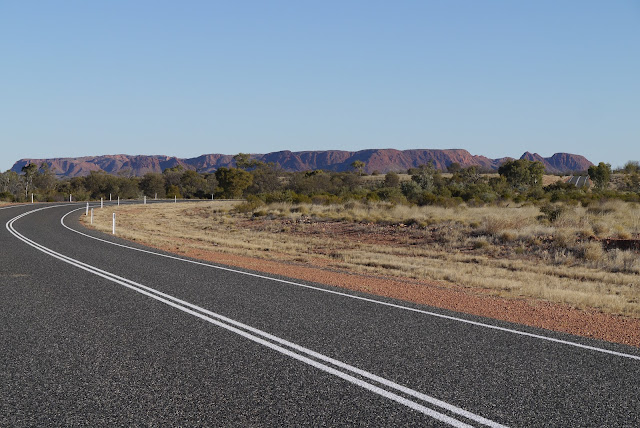 We left the West MacDonnell ranges having purchased the $6 permit we needed to drive a section of the RCW called the Mereenie loop road which passes through Aboriginal land. This 155klm gravel road is the only unsurfaced section of the RCW and possibly the most isolated section you’ll encounter driving the RCW, given that not as many people traverse this section because it’s unsurfaced. Therefore it’s defiantly not a section of road you’d want to break down on, there is no phone signal for the entirety and beyond, and your permit only allows you to travel on the road with no stopping except for at a single designated hill top rest area where you are permitted to stop for a maximum of 24hours. 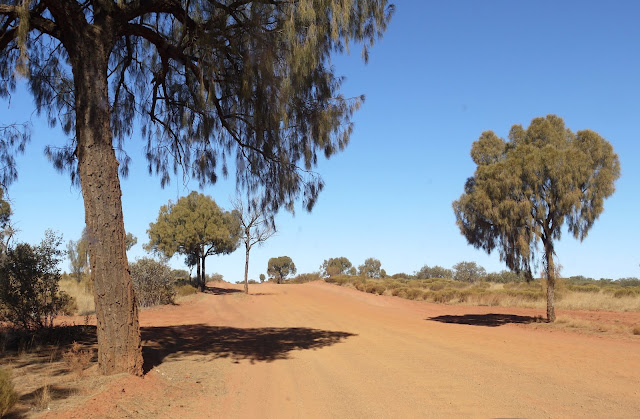 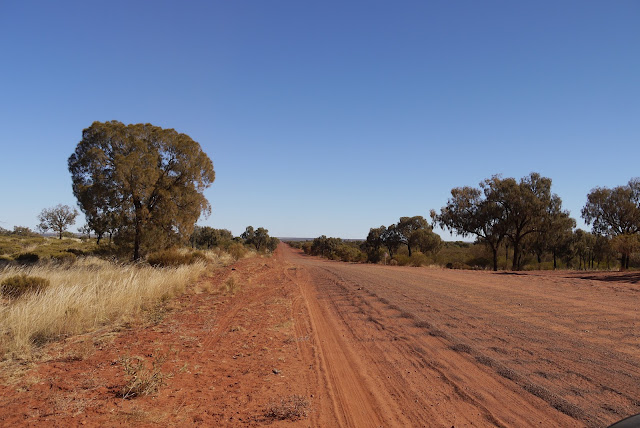 When we stumbled across a 4wd rental vehicle stuck the bull dust, sympathy got the better of us and we pulled over to offer help, well they were frantically waving. This was also our first real SOS encounter in the outback, an exciting prospect for L who was keen to get involved in saving the day. For the stranded French family it was a good job we did because they didn’t have a shovel which was very much needed in order to dig them out. L subsequently managed to rock the vehicle free and that was when we realised that the passenger wheel was pointing in it’s very own unique direction! Despite not supplying a shovel, the hire company had equipped the Frenchfam’s vehicle with two spare wheels. Unfortunately no amount of spare wheels would be fixing this problem. L had looked underneath and concluded that the cv joint had completely shattered in two. He relayed this information to the less mechanically minded French pére. It went something like, your wheel is f**ked with accompanying rather dramatic ‘breaking apart’ hand gestures. There was nothing more we could do other than suggest flagging down the next passing vehicle in the hope that they might have a radio or satellite phone. As luck would have it the next ute to pass had a satellite phone and so Frenchfam were able to call their car hire company who in turn said they’d aim to get a recovery truck and replacement vehicle out to them by nightfall. We continued on our way whilst keeping a lookout for the friends of Frenchfam who they had been travelling with. French friends could be forgiven for not releasing that their companions were no longer following on behind because of the amount of bull dust kicked up from a vehicle on dirt road. It's a rear view wash out and you really can’t see a thing behind you. We did manage to flag down French friends and informed them of their stranded companions. 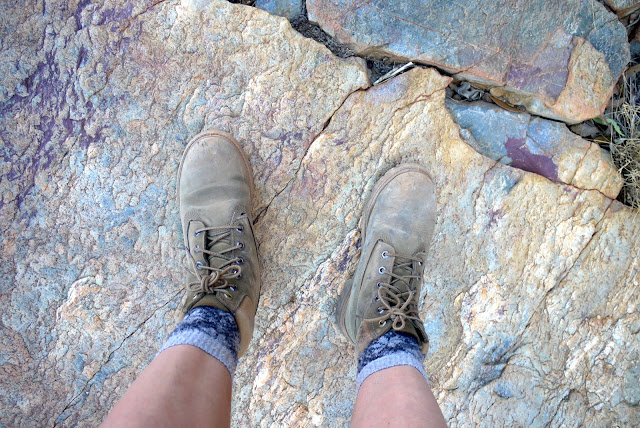 The highlight of this particular section of the RCW was a chance sighting of dust devil, a truly mesmerising swirling cloud of bull dust. We watched as it wandered across the campground at the hill top rest area, before literally disappearing over the cliff edge. This was the same evening we happened to meet Bill and Ben, a super friendly Queenslander couple and you’ve guessed it, Bill and Ben are not their real names!
Bill and Ben were sat out on their deckchairs (having unintentionally parked their caravan at the best cliff top spot) enjoying a drink whilst soaking up the view. L and I had come for a nosey and so I announced our arrival with “Hello we’ve come to sneak a peak at your view". “It’s not ours, come and have a look” followed, along with a couple of beers and we learnt that they too were driving the RCW in our direction. At this point we had no way of knowing that a handful more chance encounters with Bill and Ben would culminate in a dramatic team GB victory against Team AUS at a board game called sequence! 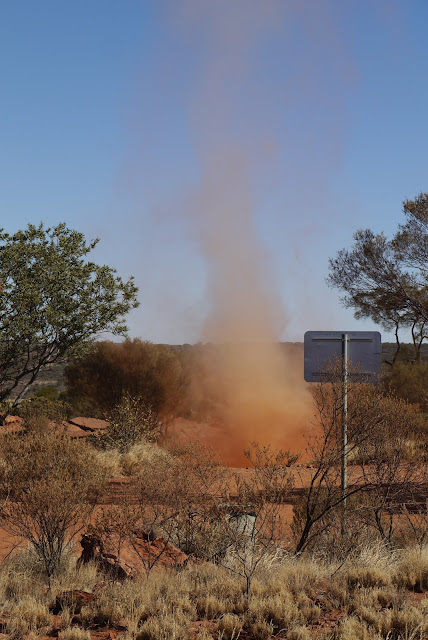 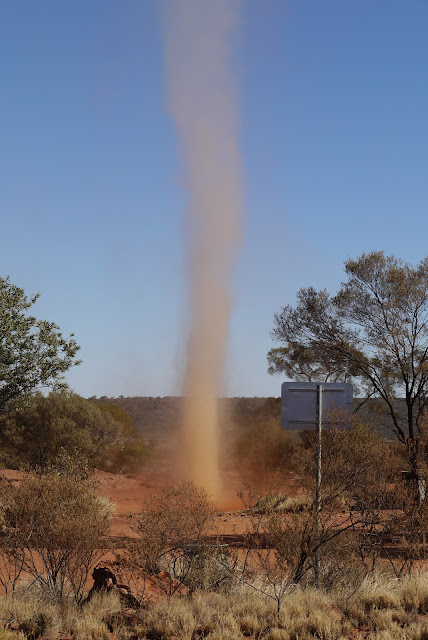 L and I spent a good couple of hours that evening sat around our own roaring campfire eavesdropping on a family sat approx 100ft away. The father had enthusiastically taken the lead role as games master in some brilliant wizardry quest game that he was playing with his children. The game had a top trumps feel about it and the whole thing was more than highly entertaining. Did I mention that the father was British and well spoken? This added to our delight in listening, ah a familiar accent. 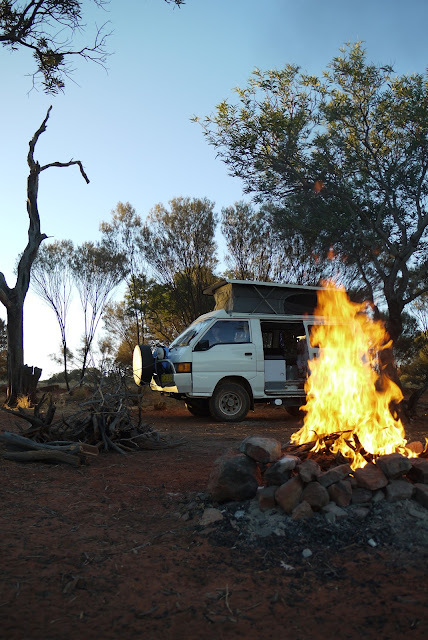 Kings Canyon was the next point of interest on the RCW and with a good choice of walks of varying lengths there’s something for everyone. L had read that the Kings Canyon Rim loop walk was the one above all others to do and it really didn't disappoint. We arrived at midday which wasn't ideal (most of the walks suggest setting off early in the morning to avoid the heat, in particular this one!) but after the initial steep step climb the rest of the walk was pretty much flat along the top. The down side to Kings canyon is that it was heaving with tourists but perhaps this had something to do with the large tourist park a few miles down the road. Again the walk took a lot less time than the sign indicated. 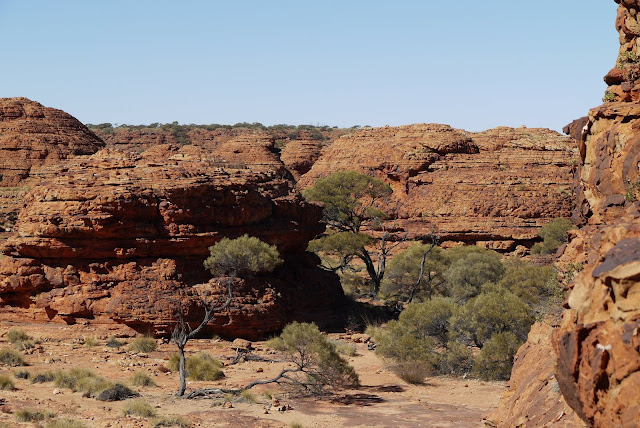 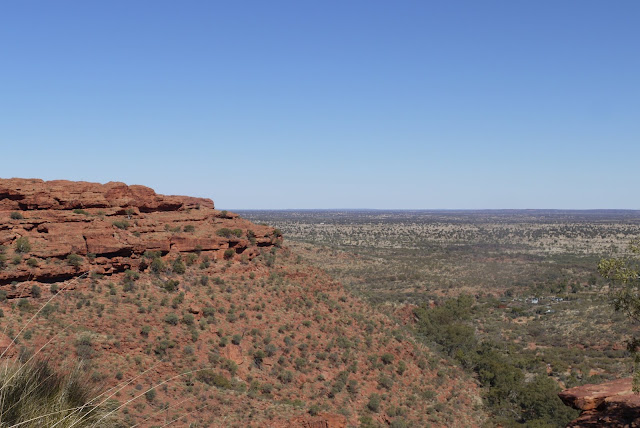 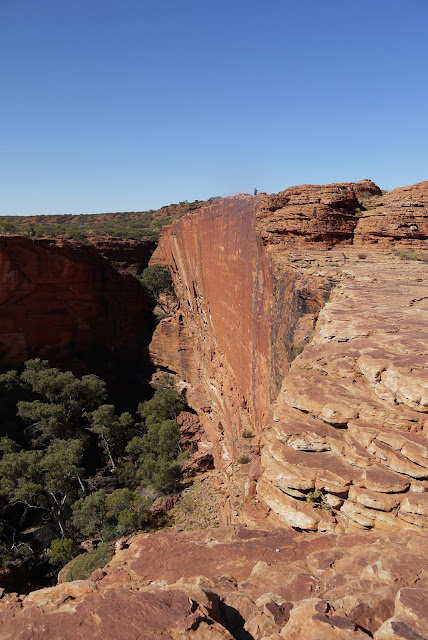 We were brazen on our drive out and swung by the tourist park to grab ‘free’ hot showers. This was one of those 'penny drop' moments. We realised that if a caravan park has no barrier and you drive confidently into the park and onto a vacant pitch, you can fill the van with drinking water and make use of the toilets, showers and clothes washing facilities without really being noticed! We were back on the bitumen now and only a couple of days from Uluru (Ayers rock).