60. WHERE TO CELEBRATE THE ANNIVERSARY OF OUR FIRST YEAR OF TRAVEL...WOLFE CREEK! 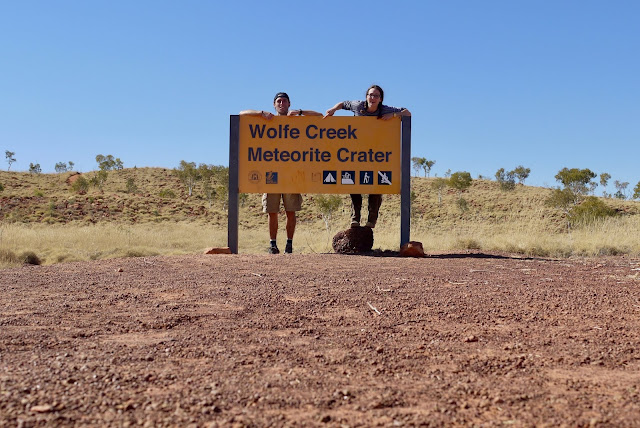 Where to celebrate the anniversary of our first year of travel? How about the world’s second largest meteorite crater and the setting of an infamous horror movie. Perfect.

It’s hard to believe that one year has passed since we handed over the keys of our empty home to the new buyers and started cycling (on our hilarious folding small wheel tandem) to London and then onto France to attend some very special wedding celebrations. Such a lot has happened since then, including our not blogged about but awesomely brilliant Scotland coastal motorbike tour and our time back in Yorkshire with family and friends. 3 months backpacking around colourful S.E Asia has lead to some interesting experiences and hilarious blog posts and now we find ourselves over 5 months into our Australian overland adventure, having successfully traversed everything from deserts and rocky roads to beaches, rivers and lush mountain tracks. The Crampervan had so far proved reliable bar the small blip in the bungles, where mammoth corrugations broke the final weld of the spare wheel bracket (previous blog post), resulting in the van looking slightly more odd than usual. 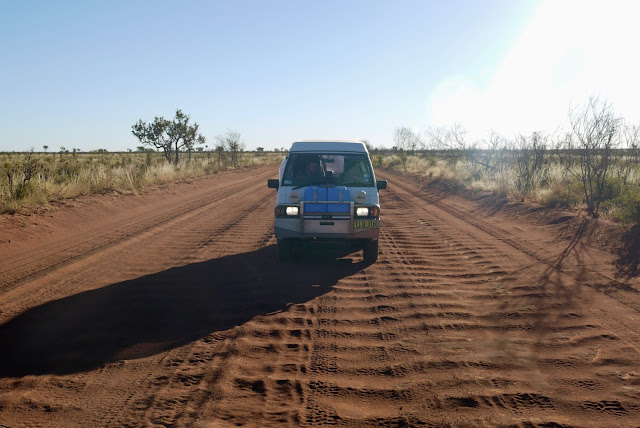 The access to the Wolfe Creek creator was a bumpy 4 hour drive down the undulating Tanami track followed by a further 1 hour drive from the signed turnoff. Note: this was Crampervan speed. I don’t imagine it would take this long in a 4wd with upgraded suspension or for anyone not having to worry about L’s glass coffee plunger falling out of the cupboard.
Some way into our drive we approached four men fumbling around their vehicle which was stationary on the wrong side of the dirt road. L and I watched as they unmistakably heaved a body onto the back seats! It was broad daylight, one guy offered a friendly wave as we passed. I think L and I were too stunned to respond. The Wolfe Creek vibes were already very present. We hoped very much ‘the body’ was that of a Kangaroo and not a human.
As we continued at Crampervan speed we caught a glimpse of the same vehicle approaching in the rear view mirror, they over took us. Later a second vehicle waved us to slow down, at the time neither L or myself were too sure why we would need to slow down as we were already travelling at record breaking slowness. ‘Body vehicle’ was once again up ahead, we watched as it left the Tanami to traverse through bush with guns pointing out of passenger windows. We came to a stop beside ‘slow down vehicle’ and I rolled down our window. What the lady went on to explain was that her and her family were in fact hunting emu! Wild emus were another animal I’d hope to see at some point along our travels, only I wasn’t expecting the first one I would see to have just been shot and hurled onto the back seats of a car. 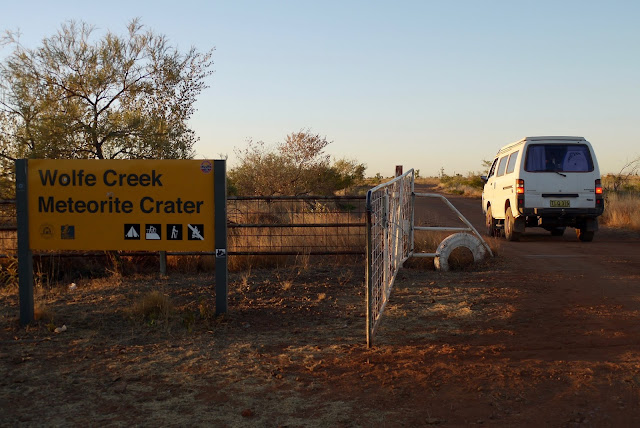 We eventually arrived as the sun was setting to find a surprising number of campers at the crater’s ‘free camping area’. The following day everyone had packed up and gone by 7am leaving L and I with the whole place to ourselves! We spent a few hours exploring the once 120 meters deep crater. The current depth is a less impressive sounding 25 meters because dust and sand have back filled it over the years but over all L and I were super impressed. We walked down into the crater where there is a surprising amount bushes and brilliant purple flowers. A few scratches later we emerged out from the bushes at the other side of the crater, scrambled up and walked back along the rim.

Staying a second night gave us the after noon to do a bit of van maintenance, the kitchen had become in need of a spring clean and we’d also managed to pick up a small bolt in a tyre at some point on the drive in. The easiest option would have been to swap the punctured tyre for the spare which was now inconveniently living inside the van but there was too much appeal for doing our own puncture repair, with the kit we’d purchased at the start of our trip. Having never used one before, what better place to have a go than in the middle of nowhere... 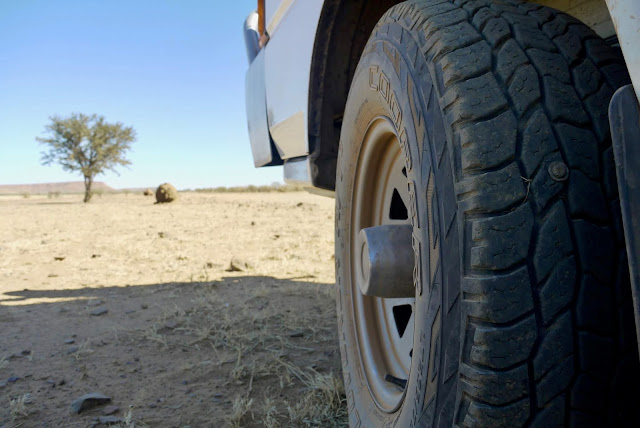 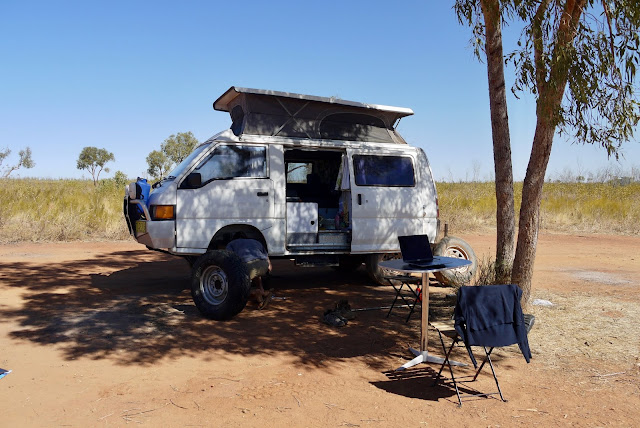 L jacked the van up using the Mitsubishi bottle jack only for it to have fit and start spewing it’s oil out through it’s seals. This was not something L had ever known to happen to a jack in the history of ever, so it would be fitting that it would happen to us, right now. Not to worry, out came the reserve jack given to us by Alistair in Armidale, and a good job he did! L removed the wheel and pulled out the offending bolt causing the tyre to completely deflate. The kit comprised of some fibrous rubber strips, glue and a rudimentary needle for stabbing into the wheel and pushing the rubber into the hole. The trusty Dr Air 12v compressor was then pressed into action and the tyre successfully re-inflated. Pleased with ourselves, we enjoyed the rest of the evening thinking of our little nephew and what he might be up to on his birthday and celebrating our year of travel with some Bunderberg Ginger beer. This was the closest thing to bubbly L could get his hands on, which had been the result of buying our provisions at a ‘dry’ town on a Saturday. 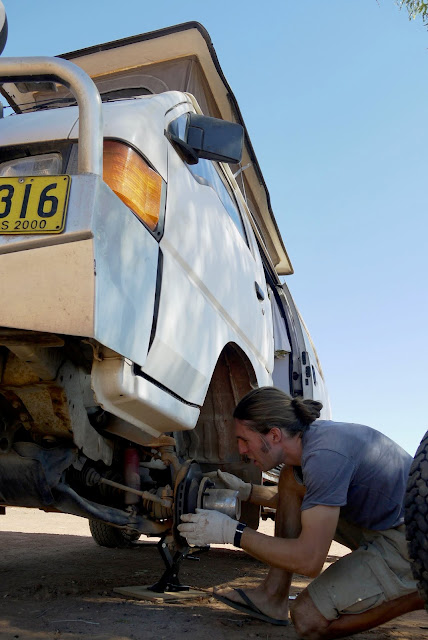 Having survived Wolfe Creek we headed off deeper into The Kimberley. We were about to meet some crocs…