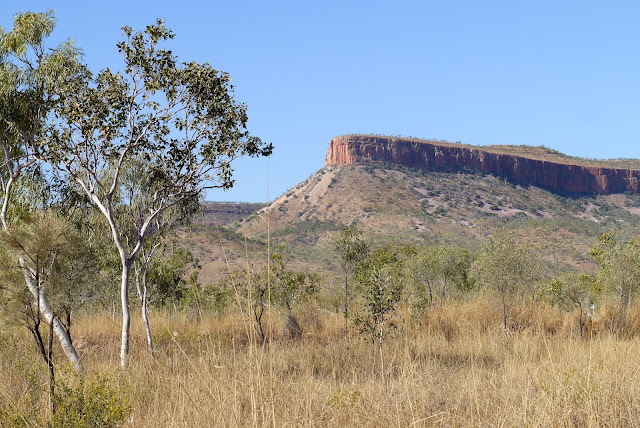 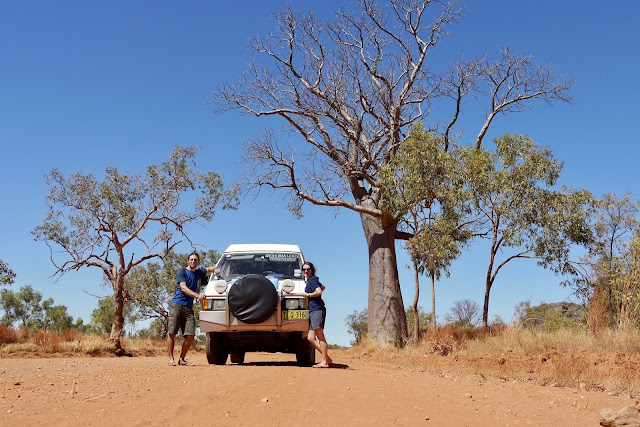 L had banged on about the ‘almighty Gibb River Road’ from the moment he first read about it almost a year ago. The 650km track which can take a week or two to drive, has ample river crossings, passes through some really remote rugged wilderness and is basically any 4wd enthusiast’s dream. On our travels closer to the Kimberley both L and I had started to hear first hand accounts from those who’d recently driven the Gibb. Surprisingly many of these accounts weren’t the romanticised version that L had been sold on. In fact, the more people we spoke to, the more of a mixed bag of responses we received. This was concerning for L, who now found himself wondering if his ‘should be amazing’ Gibb River Road, was actually just…overrated. 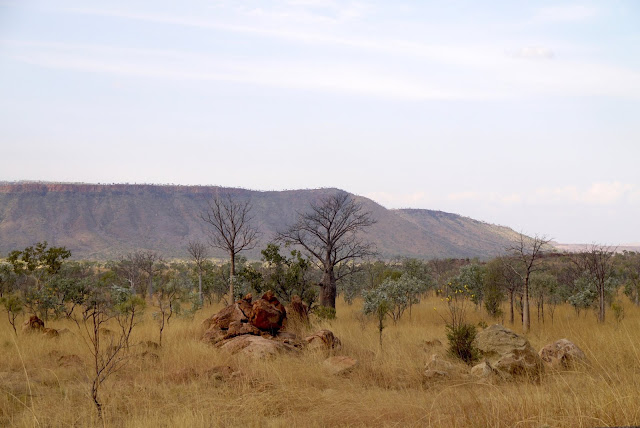 A more pressing issue began to surface. L’s vintage Kimberley map (now out for daily use) confirmed our suspicions that driving the full length of the Gibb would mean missing out on The Bungle Bungle National Park and Wolfe Creek crater… or we’d have to make a pretty colossal amount of backtracking to include them. Backtracking the equivalent distance of driving from London to the Scottish Border. It had become clear that we needed to make a decision on which route to take. L and I spent hours deliberating in the back of the Crampervan. Neither one of us wanted to just see the key landmarks on one route but not the other, however we both agreed that it was just plain ridiculous in terms of time and fuel to do 330 extra miles, so we came up with an alternative. 12 months ago L would not have envisaged himself suggesting that it would actually be better for us to not drive the entirety of the Gibb River Road, but this was what he now found himself advocating. This compromise would allow us to cherry pick and combine most of the key places from each route that were important to us, whilst keeping the backtracking to a minimum. We hatched a plan of attack. 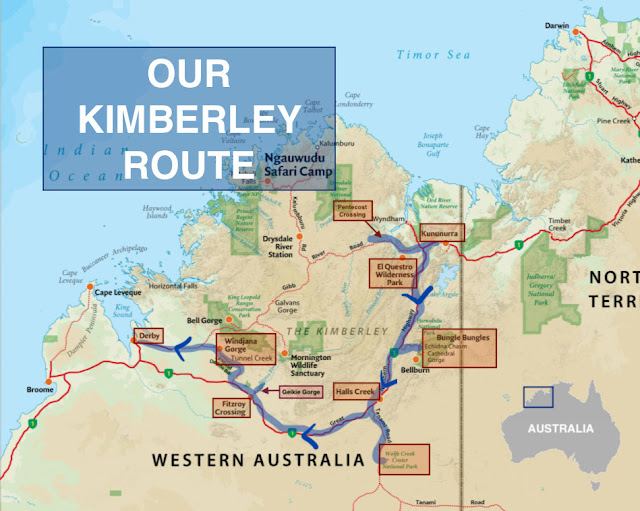 Leaving Kununurra we’d enter the Gibb at the Northern end to explore the gorges and hot springs at El Questro and after we’d continue onto the much talked about Pentecost river crossing. Then we’d return to the highway and van ourselves down to visit Purnululu National Park (otherwise known as the Bungles). Following a few days of bungling we’d continue south on the highway before turning off to drive the 260km round trip to see Wolfe Creek crater. Back on the highway we’d continue through Halls Creek, Fitzroy Crossing and finally take a short cut to Tunnel Creek and Windjana Gorge national parks, before rejoining the Gibb at the southern end. We estimated the above would take us 13 nights (14 days). The route was 1500km minus the extras for running around.

When it comes to fuel consumption, the Crampervan isn’t exactly economical given it has the aerodynamics of an enlarged house brick. Our trusty 2.4L petrol gives us a not so generous return of 18 mpg (check that!) and this is on a sealed highway driving at a not so record braking 50mph. At times this can feel like we may as well be pulling a road train behind us. Let’s just say that both L and I are somewhat grateful that fuel is cheaper in Australia (even in the bush) than it is in the U.K. Added to this, an awesome ‘fuel map’ app allows us see all of Australia’s fuel stations and current prices in map view. Not only is this mega useful for planning your fuel stops before leaving a town to traverse the outback but since leaving Sydney, this free app has literally saved us hundreds of dollars! 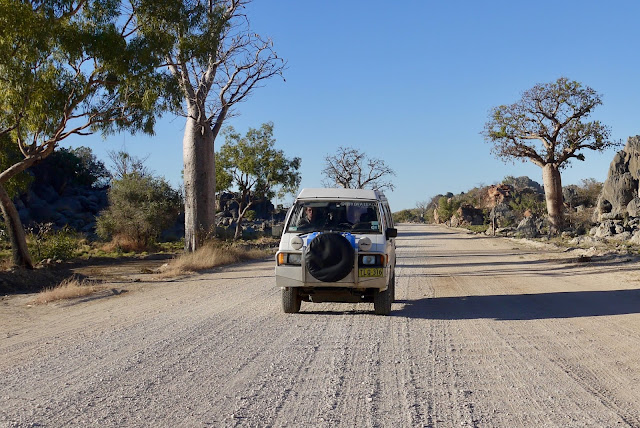 Back to the route…
Spanish sounding El Questro, positively exotic for these outback parts, describe themselves as a 800,000 acre “wilderness park”. The owners of this former cattle station turned tourist hotspot have really struck tourist gold by ‘cashing in’ on the station’s natural and most interesting features by offering access to the paying masses. L and I opted for a single day pass so as to see a couple of their most raved about spots: Emma Gorge, another dry riverbed walk leading up to a spectacular swimming hole; and Zebedee springs, a series of stepped lagoons surrounded by tree roots and overhanging tropical vegetation. Zebedee was visually quite amazing except for the amount of people in the water. L and I dipped into a cosy lagoon which we managed to keep to ourselves. The water was warm, neck height when sat down and crystal clear. So clear in fact that I watched as familiar creature swam towards L’s ankle and tried desperately to latch on. Leech! In a bit of a fluster the offending creature was flicked away. Our relaxing time at Zebedee springs had abruptly ended. We left El Questro and bumped our way down a corrugated ‘Gibb’ to the Pentecost crossing, all the while wondering if the leech had latched onto an unsuspecting occupant in the next pool downstream. 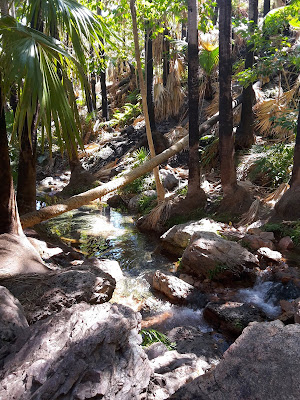 Our night camping by the waters edge at the Pentecost crossing was quite exciting. We  parked a croc safe distance from the water and made use of a previous camper’s fire scar. The draw back to this was that our roaring fire was, we felt, a little too close to the waters edge given that every time there was a splash, the both of us would jump out of our seats. Learning to tame our reactions to the regular water splashes (the fish were catching flies) we managed to remain seated by the fire to watch the moon, in all it’s glory, rise from behind the hills into the sky and over the water. The insane noise of a huge road train with it’s 80 odd wheels driving through the rocky river at 10pm, followed by a bat which narrowly missed flying into my face, drew a close to our evenings entertainment.
The Pentecost had been a little shallower than the Ivanhoe which we’d crossed a few days earlier (blog post #58 & video on our facebook page) but because of it’s hidden rock laden bed, the Pentecost crossing has gained a reputation as somewhat of a rig breaker. The latest story going around town was of a guy a week ago, who broke the oil cooler on his Navara resulting in a $10,000 recovery bill! Ouch. 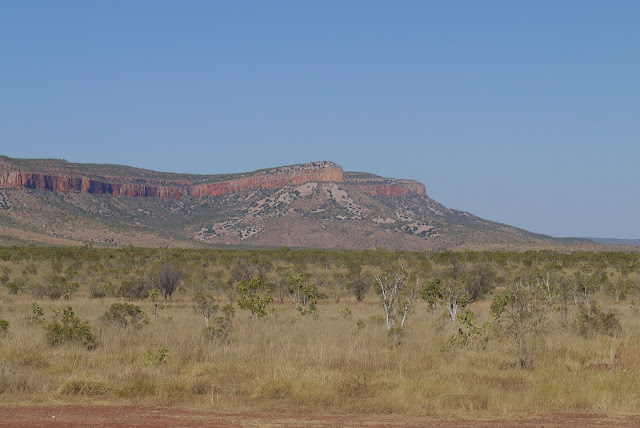 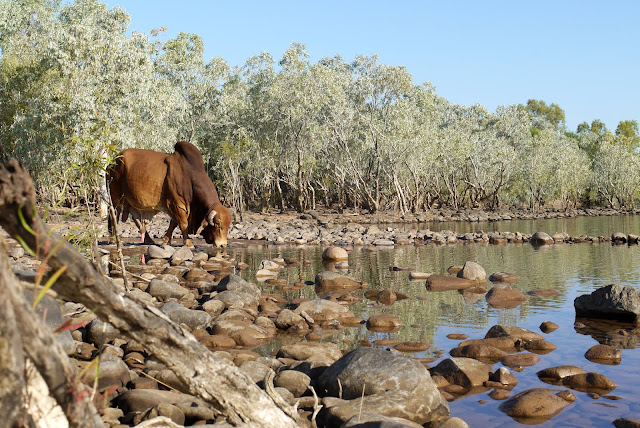 A small spider which fell onto L’s lap after he closed the drivers door, caused a bit of a flap and replaced the need for his morning coffee. Very much alert L fired up the Crampervan and we left the Pentecost and the Gibb River Road behind and headed for The Bungle Bungles (blog post #59) and Wolfe Creek crater (blog post #60). 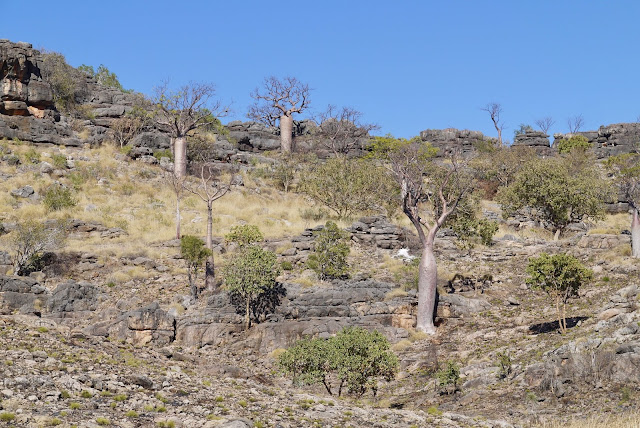 Gorges are 10 a penny in this part of the world, second to this are waterfalls. A boat cruise up the Fitzroy River in Geikie Gorge NP gave the pair of us our first mass sightings of fresh water crocodiles. To build on our croc sightings we checked out Windjana Gorge which didn’t disappoint, we were able to get up close to handfuls of crocs basking on the banks. 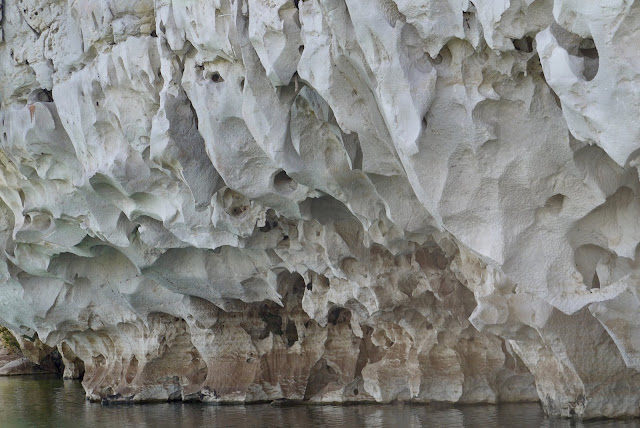 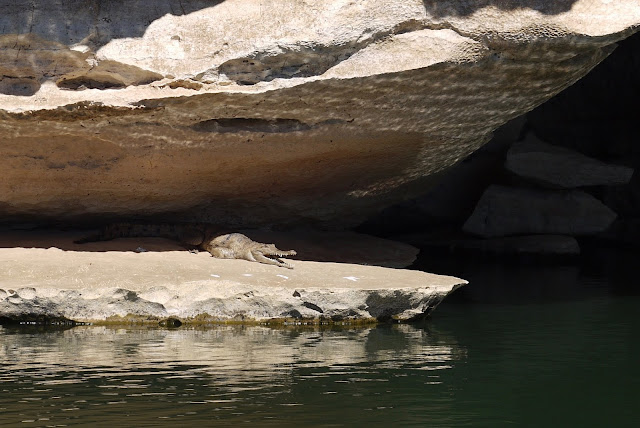 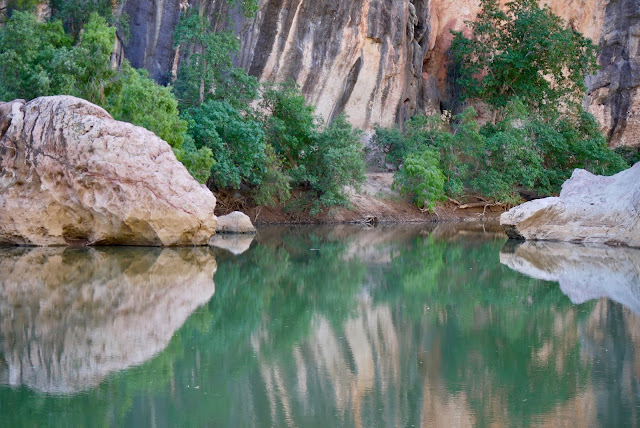 Tunnel Creek turned out to be a ‘head torch essential’ and ‘water wading necessary’ exercise. We entered the pitch black cave only to realise that our head torches were fading so we picked up the pace to catch up to four people who were not far in front of us. Hearing a chap who was exiting the cave, inform the four in front about the fresh water croc eyes he’d seen whilst wading through the water, was another reason to stick close behind these people. We were wimps. Our return walk through the huge tunnel was somewhat less illuminated due to the absence of our four beacons of light who’d decided, having emerged from the end of the tunnel, to do an extra curricular bush walk before making the return. My head torch battery decided to give up during our return walk so what was already dim was now very dark. At least we knew the route! L did pretty well to carry me on his back through the deeper sections of water. I’d like to highlight that this was not out of a fear of wading in the darkness through thigh deep cold cave water, home to an unknown number of small fresh water crocs… it was actually because I’d cut my foot earlier that morning and I was trying to avoid getting it wet. 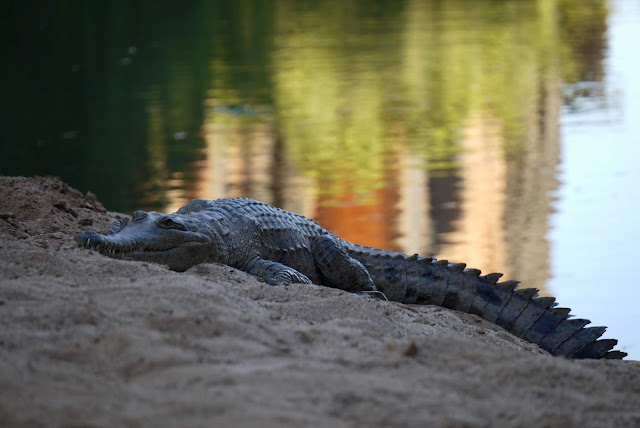 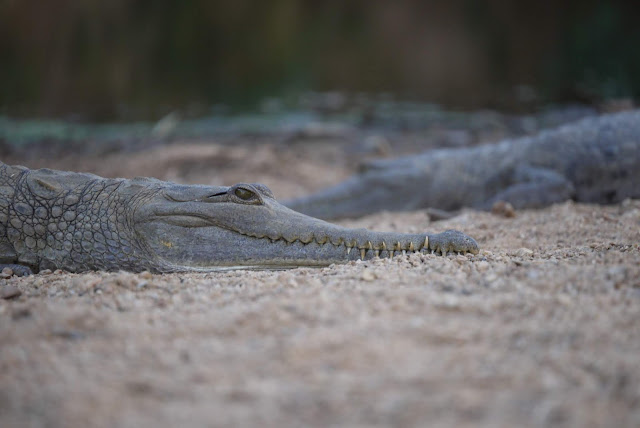 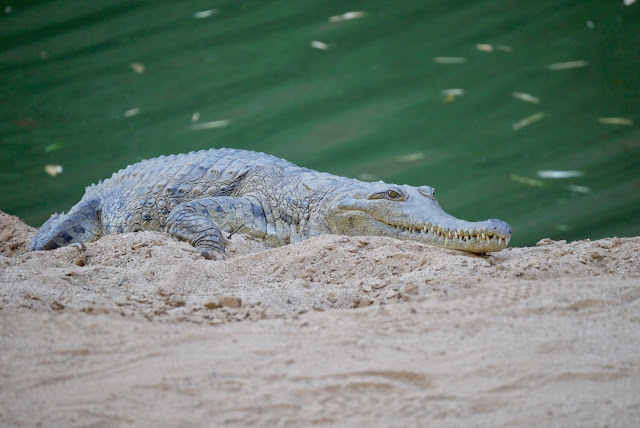 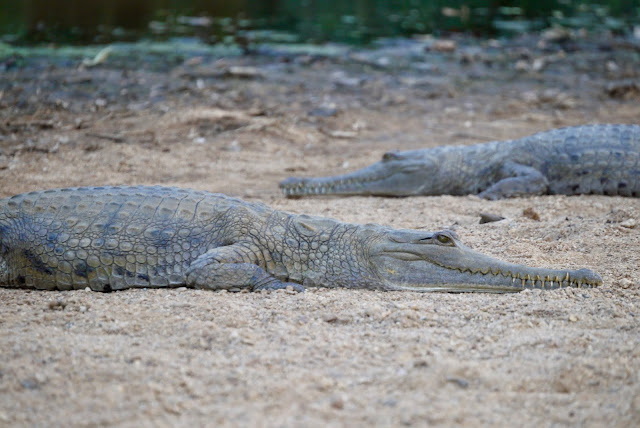 We spent a night bush camping just off the Gibb before arriving in Derby (not pronounced ‘darby’) to find out that the rodeo was in town! Derby, with it’s wild west aura, felt like it would be a good place to experience a rodeo for a first timer. I wasn’t sure I’d enjoy every event but L and I thought we’d give it a try. We both looked equally out of place amongst a sea of Levi's jeans and cowboy boots. L was rocking the surfer dude look and although I’d tried to add a western flare to my outfit… L took delight in pointing out, ‘my get up’ accentuated by my natural linen shirt and hat, ‘screamed British archaeologist’. As I had expected the bucking bronco competition wasn’t really my cup of tea because I felt sorry for the bulls who obviously didn’t want a human sat on their backs. I won’t deny however that it was quite entertaining to watch these humans flying through the air having not managed to stay on the bull for more than a handful of seconds. The ladies barrel racing was great to watch and more my thing, in fact I’ve always fancied a go. Then came the lassoing on horseback competition which was an interesting demonstration of skill although it appeared all but one team, hadn’t quite mastered this skill. The calves had won in this event and I was secretly quite pleased. 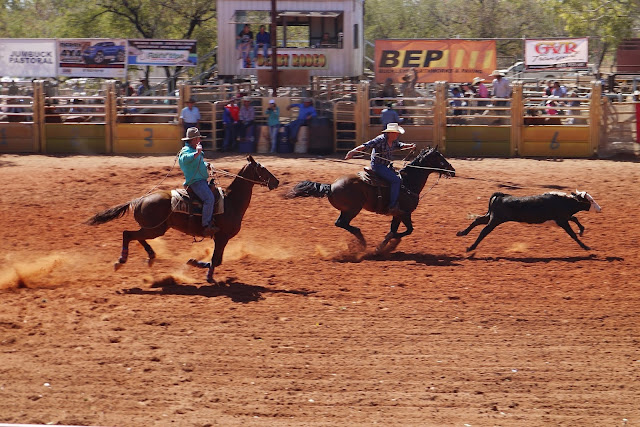 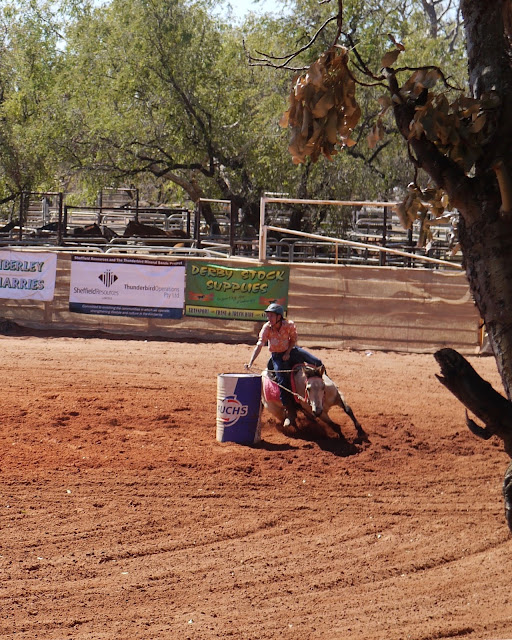 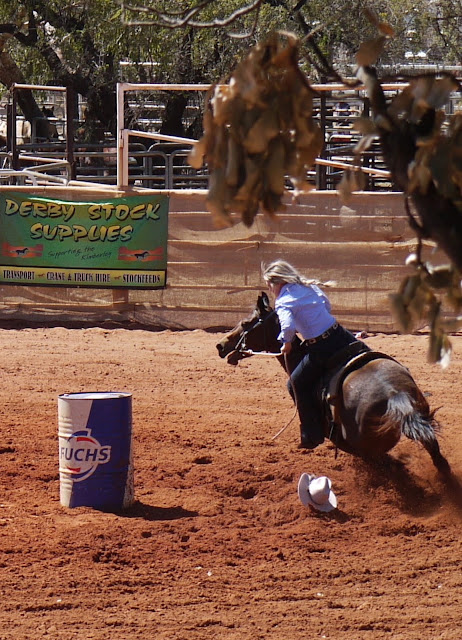 For the first time the Crampervan was about to get properly bogged in sand. As you would expect we were in the middle of nowhere having decided to take a 4wd track up a dry river in the search of something fairly unique… hold out for the next instalment of our journey.