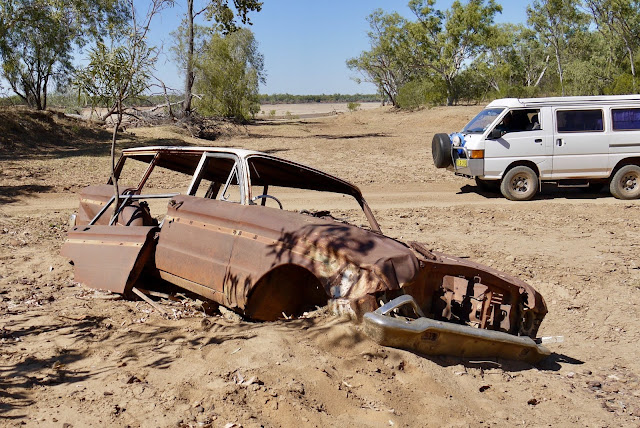 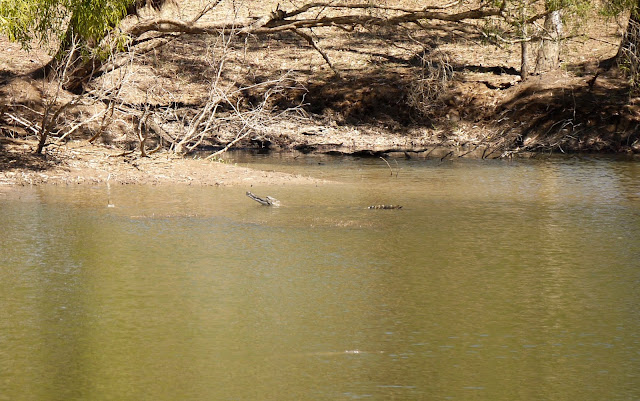 ‘Cramping’ on the sandy banks of a huge partly dried up river for two nights was relaxing peaceful and a whole load of off-road fun. Further north along the river we'd heard about the remains of something quite interesting. It took us an hour of negotiating various undulating sand tracks to find what we were looking for. We knew we were getting close when we started to pick up a Hansel and Gretel trail of abandoned vehicles which lead us straight to the last remains of Helmut Schmidt’s shack. Helmut Schmidt had died an elderly man but the remains of his house in the middle of the river bed still stand today. Helmut lived a basic life, literally on the river bed for over 40 years. He had no running water or electricity and during the wet season when the river would flow he’d live solely in the upstairs of his house because the downstairs would be under water! What a guy! 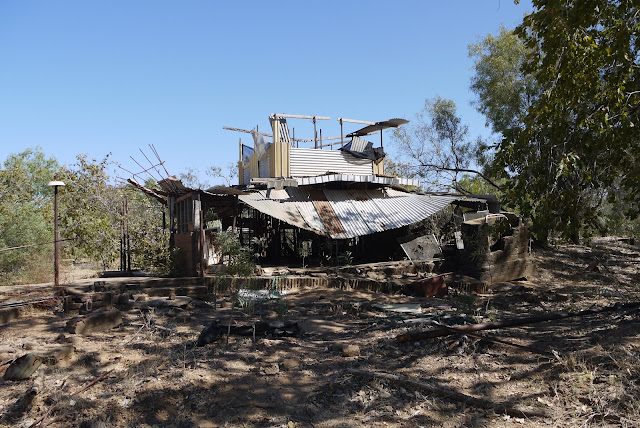 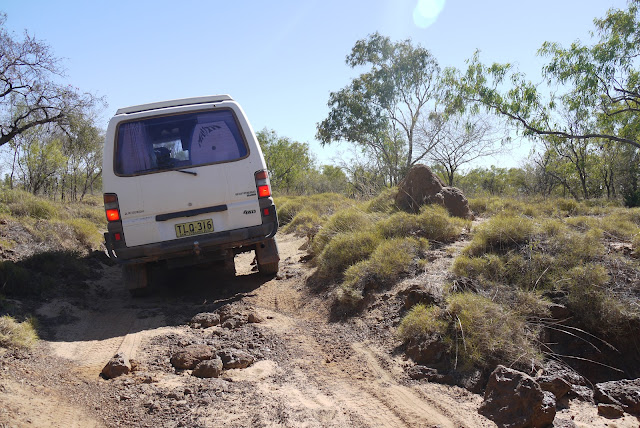 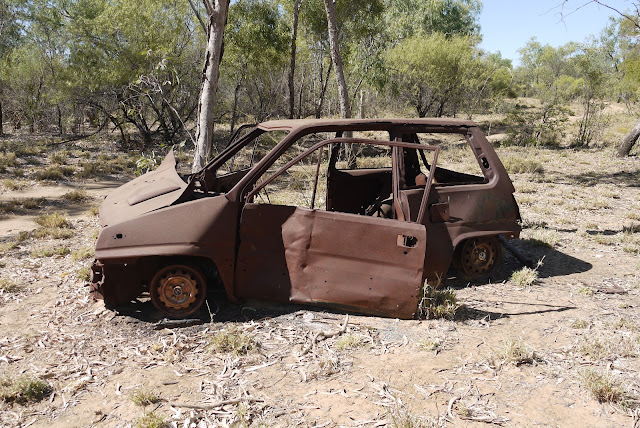 Leaving the shack behind we followed a track we assumed to be the same one we had come in on. It wasn’t long until we realised it was not the same track. The underbelly of the van now rested on the sand and the van wheels, swallowed, were only part visible. Low range wasn’t enough and we were well and truly bogged. This was our first experience of getting bogged in the Cramper and neither of us entertained the thought of our tiny home on wheels joining the collection of abandoned vehicles. L set about further deflating the tyres and I started to dig the sand out from around the wheels. I was surprised at how knackering this was, partly because of the heat but mainly because the sand kept backfilling. Together we dug some trenches behind the wheels and threw into them a load of small branches. Fifteen minutes elapsed since we first became bogged but within that time we’d done just enough to free the van. Reversing back to Helmut Schmidt’s shack, we found our original tracks in and followed them back out. Phew! (Sadly no photo's where we got bogged, too busy digging!) 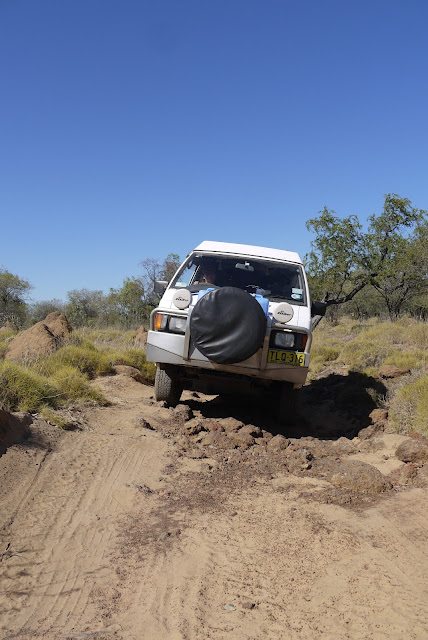 L and I had finally rocked up to Broome, a bustling coastal town known for its many pearl shops. I’d been looking forward to visiting Broome since being on the East coast and so I was hoping the town wouldn’t disappoint. Neither of us were interested in shopping for pearls, it was Broome’s enticing turquoise waters that we’d really come for. These, along with a super exciting tour of the universe by Greg Quicke and his astro tours. Finishing Brian Cox’s human universe book at this point on our trip was well timed, Greg and Brian are mates.

We’d first sighted the sea a couple of days previous at Derby (for the first time since leaving Townsville on the East coast) this was a strange feeling because it brought home the realisation that we’d actually driven from one side of Australia to the other. Celebrating this with a swim in the sea hadn’t been achievable due to the odd lingering salt water croc and Derby’s monstrous tidal changes which are an incomprehensible 11.8 meters difference in height, between high and low tide. Instead L and I thought we’d try something a little different. The rodeo was in town and so we'd gone along to see what all the fuss was about. This was destined to be a day to remember, especially for L who’d had quite a shock in the mens toilets after being greeted by German guy sat doing his business in the only cubicle  that was missing a door! (More about the rodeo in the previous blog post #61). 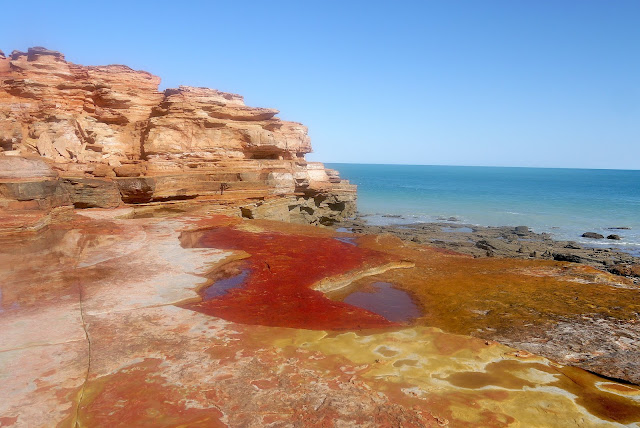 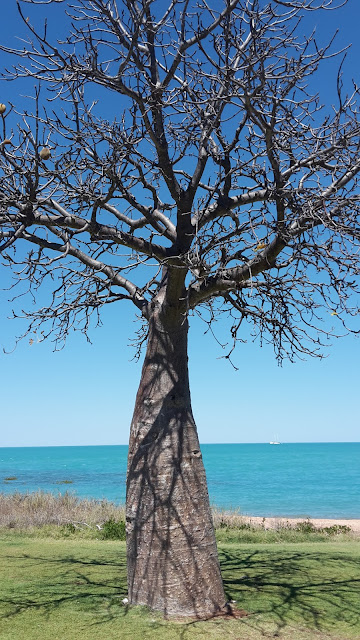 Back in Broome and we were having some difficulties with free camping anywhere close to town. We spent two nights camped next to the beach north of Broome enjoying the sound of the crashing waves and the following night we pulled into a tucked away lay-by slightly closer to town. We’d gone to use this same ‘unofficial’ lay-by the next night only to find that the police had commandeered it as a pop up breathalysing station. Both directions of road traffic were diverted through the lay-by for a compulsory drink drive test. So there we were, sat in the Crampervan surrounded by cones and blue flashing lights being asked by a somewhat tired looking officer where it was we were heading. Neither of us dared say that we were actually driving specifically to this lay-by to illegally camp so L sprouted the first thing that popped into his head. ‘We were headed south until the next free rest area’. This backfired for us because to avoid looking suspicious it meant we now needed to continue driving south and away from Broome. 20 minutes later we took the first turning which happened to be another non official lay-by. This was where we slept there was no way we were continuing south for 100 miles to the official rest area L had spoken of. 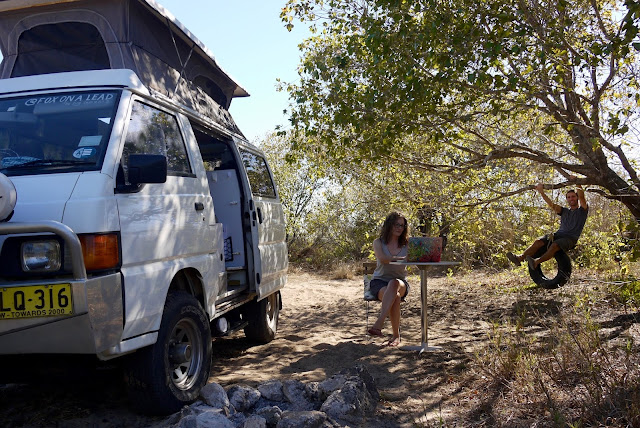 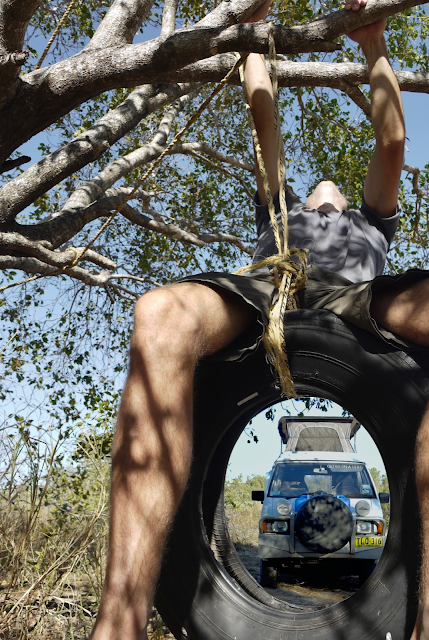 The following day we were back in Broome to watch scores of tourists riding ‘camel trains’ along the beach (Broome is equally well known for camels). Neither of us were especially bothered about paying to ride, instead we walked along the beach enjoying the unusual sight and watching in disbelief as one unlucky punter's seat started to slip further and further around the camel. Prompted by L and myself, who had to point this out, the useless camel staff halted the camel train and took emergency action to stop the poor chap falling completely off. The camel didn’t seem too happy about the whole situation either. L and I felt sorry for the chap and also for the camel but the whole thing was hilarious. 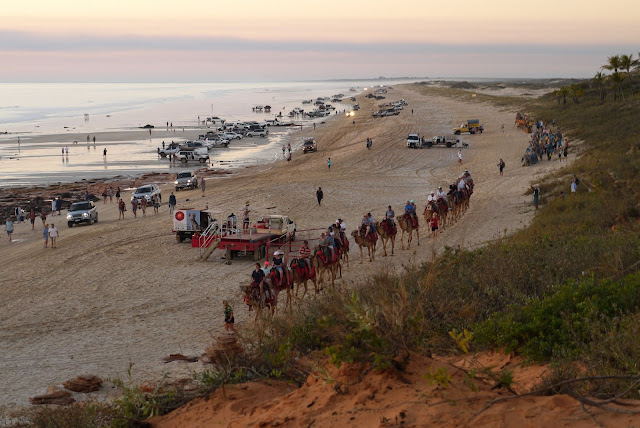 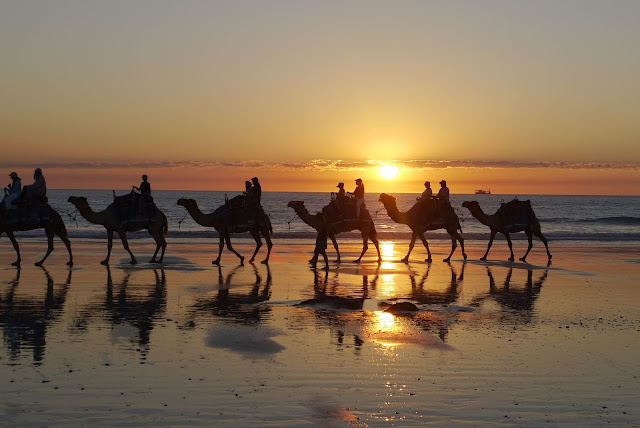 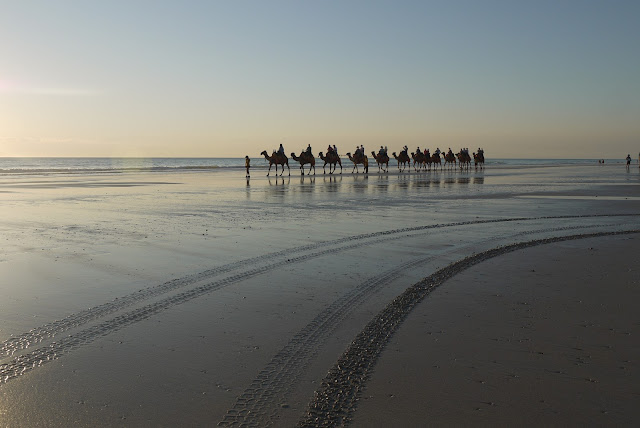 Like Kununurra, Broome is also home to an old outdoor ‘picture garden’ cinema and so L and I went along one evening to watch the latest Mission Impossible film. The place was super quirky and we sat on old comfy deckchairs. Rather than driving out of town to our possibly policed lay-by that night, we decided to check out a hostel in town. We’d had the time during our beachy day to put together a plan. We wanted to pay to park and sleep in the Crampervan in the hostel car park. The guy on the desk told me they normally don’t allow camping in their carpark but tonight they were fully booked so for $15pp (half the rate of a dorm bed) we could park on their property and sleep in our van. This seemed like the easiest option in a town where it’s $50 a night in the caravan parks or a 50km drive out of town to a lay-by. Having said that, we were definitely not going to pay $30 so L jumped into the back of the van and laid down on the floor whilst I pulled up into a space in their car park. Tonight L did not exist. I had my very own stowaway! 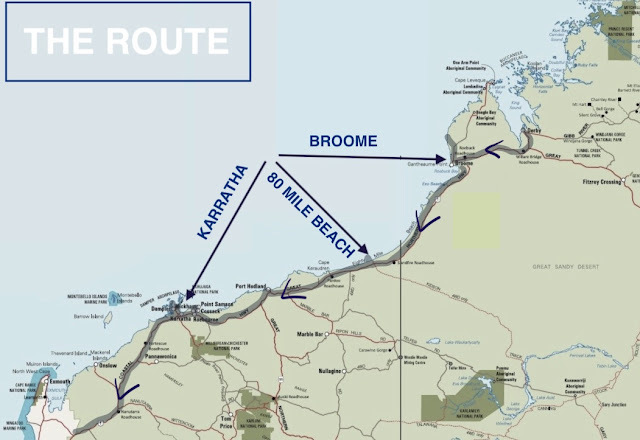 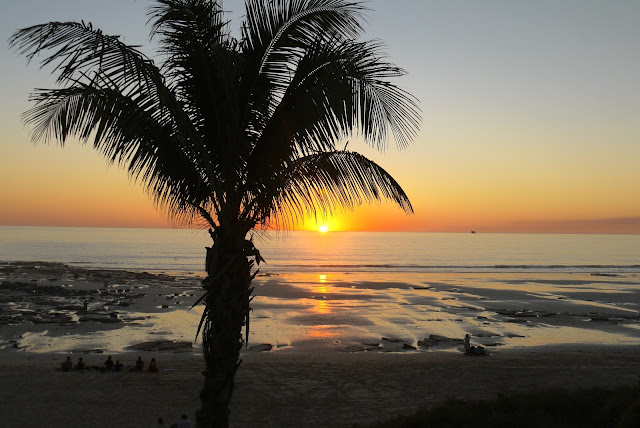 The coast road seemed to continued forever. A short impromptu detour onto 80 mile beach for a splash about on the boards in the surf was much needed, then at some point along this road our 12v- 240v inverter decided to explode. Actually it was a little less dramatic than it sounds but there was a very loud bang. This proved fairly problematic because it meant we had no way to charge our laptops whilst on the move and we were still 2 weeks away from the town of Geraldton which had the nearest Super Cheap Auto store (where we could buy a replacement inverter). Occasionally we would hit it lucky and there’d be an outside powerpoint in a park near the bbq and picnic facilities but mostly it meant that every few days we needed to swing by a town library to plug in. As we moved further south on our western coast library tour we got to experience the hilariously loud sighs of exasperation from one disgruntled librarian who was obviously not enjoying her job. Who could blame her, compared to the other library’s we’d visited, hers was pretty basic.

With fishing being such a popular Australian pastime, L had been keen to buy a cheap telescopic fishing rod. Unfortunately he had only realised this desire after we’d left civilisation and started our journey West through the outback, this was a few months ago. Along our travels we'd visited a handful of independent fishing shops in the outback towns we’d stopped in but all of them (as you would expect) had only sold good quality, expensive equipment. The type of stuff that lasts a life time and the type of stuff that L would have ordinarily bought if he was back in the UK. What we needed was a 'supermarket special', the smallest cheapest possible telescopic rod and Kmart had just the thing. L’s $15 telescopic rod was as cheap as they come, perhaps too cheap to land a fish but this was yet to be proven. It only needed to last 6 months.

After leaving Karratha, town of the rod purchase and having spent 2 nights parked overnight at a Shell petrol garage (a somewhat less glamours free camp) we stumbled across a lake  just off the main coastal road. Keen to test out the rod we stopped for an hour and almost immediately got talking to a very chatty Aussie woman. Fishing and human interaction multi tasking proved more difficult than I had expected, we caught no fish and instead got the line tangled in a tree after very almost catching a far too inquisitive seagull. Not the success we had hoped for. 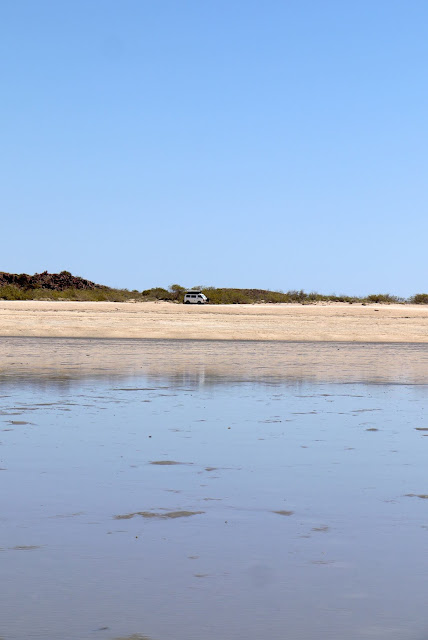 L and I were avidly researching for our up and coming time at Cape Range National Park and the Ningaloo Reef. It was the beginning of the migratory season for humpback whales and this was one of a few places in the world where you can snorkel with them, not something we were going to miss.

NEXT BLOG POST 👉  THE NINGALOO REEF. Swimming with whales and manta rays 👌🏻