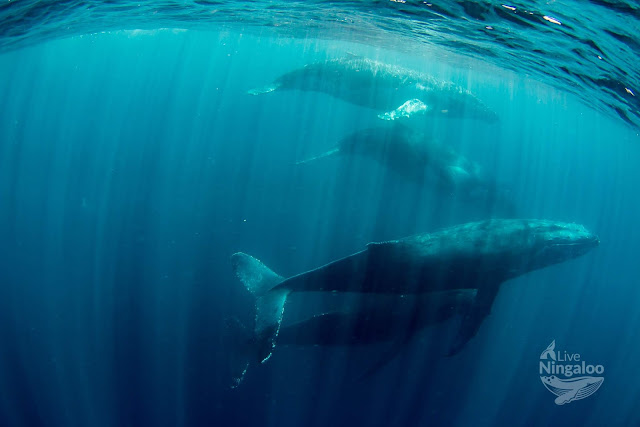 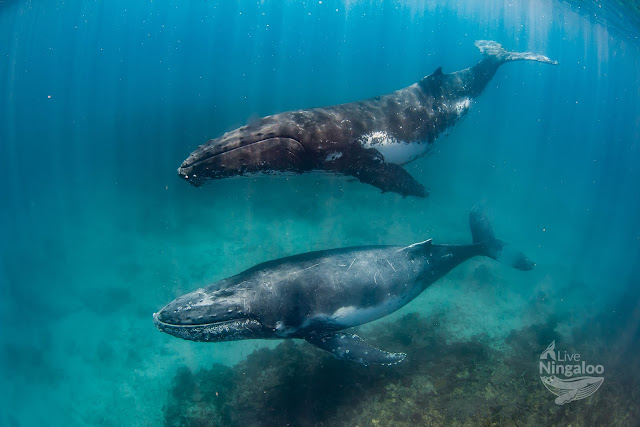 Where to begin. I’ll start with pointing out that there are no free camps in the shire of Exmouth and by all accounts the rangers are pretty hot on handing out fines for ‘illegal camping’. A shame because we would have loved to stop in the area for a lot longer than just a few days. After making the long drive up the peninsular in the Crampervan we opted to book into the closest caravan park to Cape Range National park which was ‘Yardi Homestay’. A few days previous we’d tried to book a camp spot within the national park itself which would have been cheaper and a lot more scenic but there’d been no availability for the next three weeks. 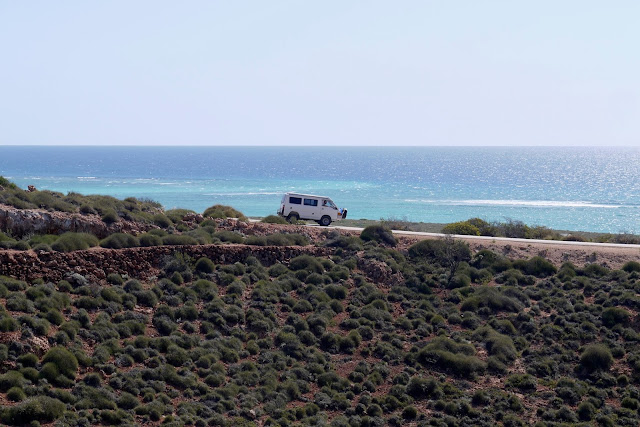 We’d barely arrived in the area when we walked onto the first beach we’d come across, to a sight of tail slapping whales straight in front of us. Perhaps a sign that our time on the Ningaloo reef was destined to be amazing. 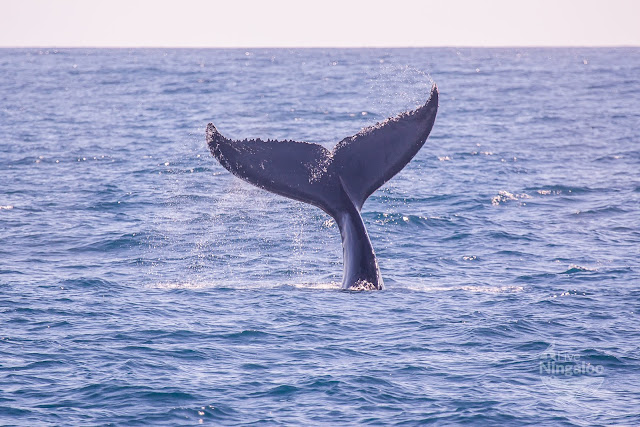 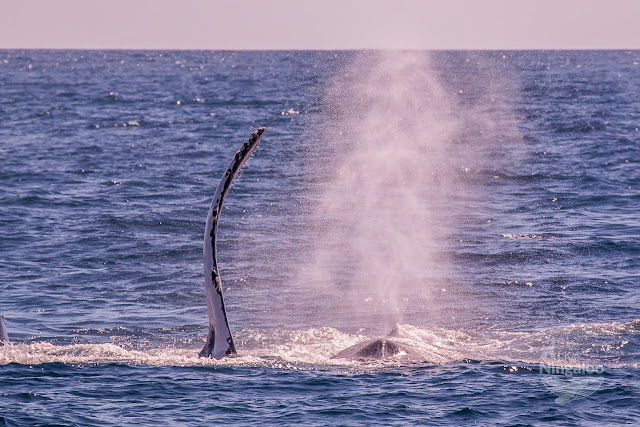 Snorkelling with whales doesn't come cheap, it would have been cheaper to buy the ‘tinny’ (small metal motorboat) that’d we’d seen advertised for sale a couple of months back. We’d joked about buying it and its trailer, wondering how much it would save us in the long run when it come into its own for croc spotting, fishing, reef snorkelling, whale watching etc…the list goes on. Having said that, we’d most definitely have already lost the tinny somewhere along one of Western Australia’s bone rattling dirt roads. L and I decided to pay a little more for our whale snorkelling experience so as to go with a company who operated the smallest group numbers. Including the pair of us, there were only 8. Locating a ‘suitable’ whale pod (a ton of regs dictate which whales you can enter the water with based on behaviour, if calves are present etc) takes a bit of time and requires the use of a spotter plane. Radio comms between plane and boat allows for the snorkelers to be discharged off the back of the boat and into the course of the whales. It’s a precise timing exercise which can be repeated handfuls of times throughout the day if a new pod is spotted. If your’e lucky you’ll be able to see the whales as they swim past or underneath you. We were lucky. L and I also experienced a special moment with one inquisitive soul who stopped to turned around for a better look at us. We were staring into each others eyes, I waved and he waved back.

The amazing whale photos in this blog post were taken by Chris Jansen who accompanied us our whale snorkel. Commissioned by Live Ningaloo. 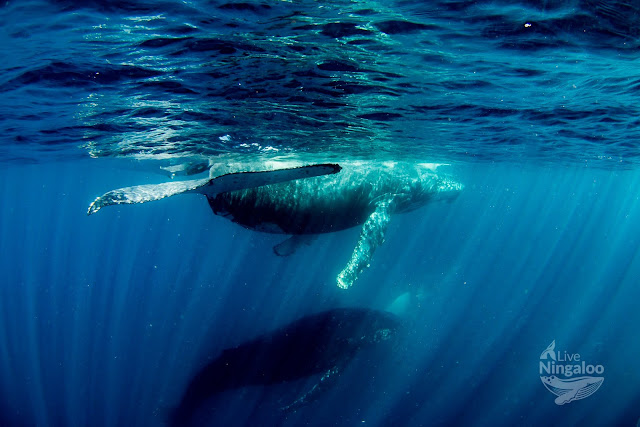 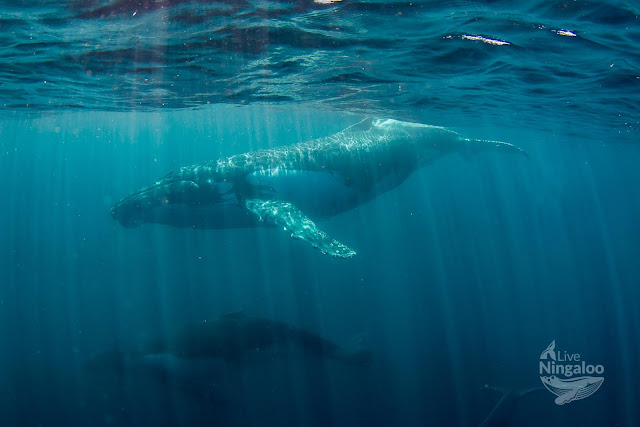 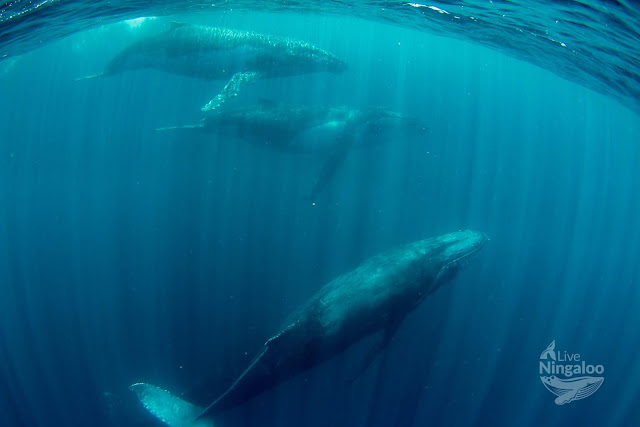 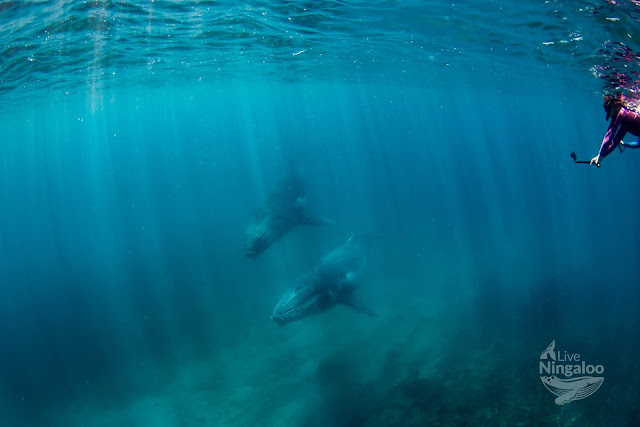 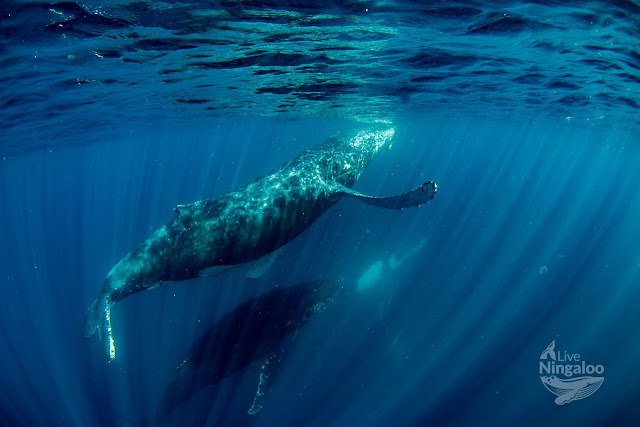 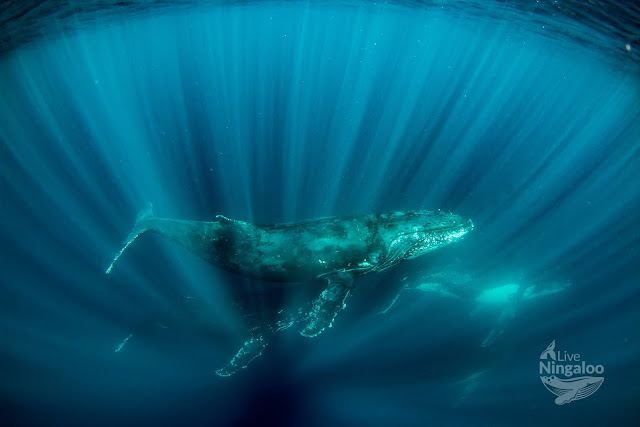 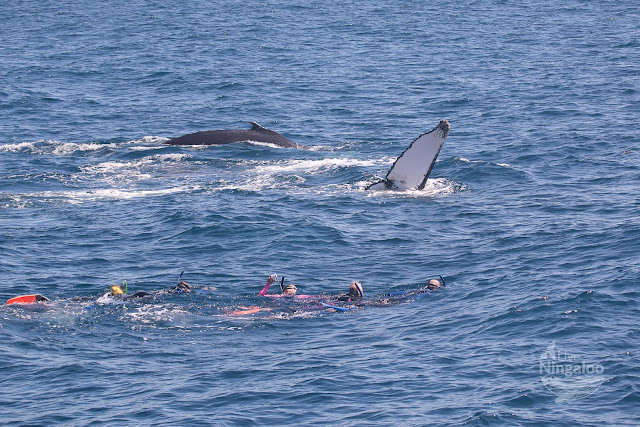 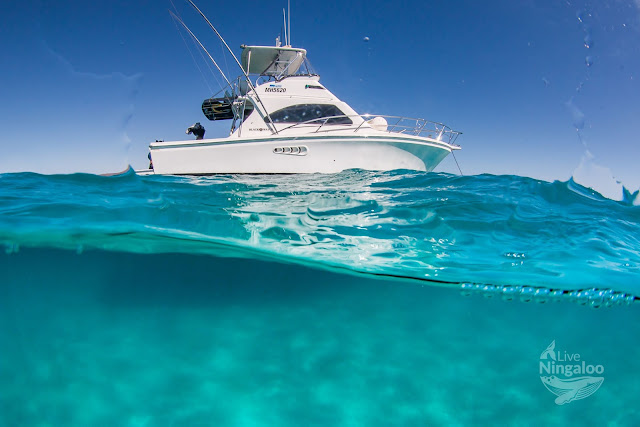 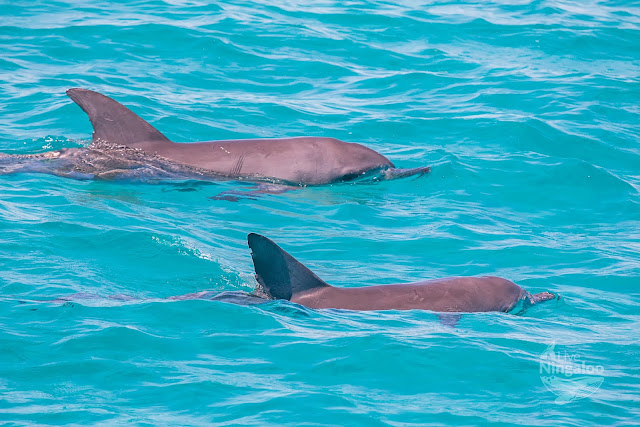 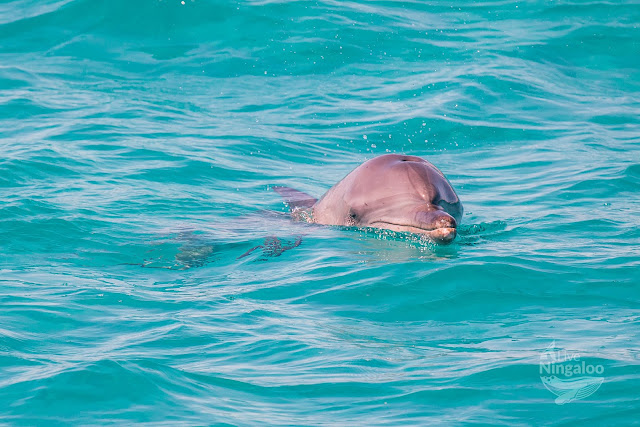 Further down the coast in Coral Bay L and I found a similar experience for swimming with Manta Rays. We booked onto the cheapest half day package, quite the opposite to our full day expensive whale tour. This was partly because there wasn’t much separating what the different Manta snorkelling companies offered and partly because a budget half day tour only lacked in snorkel time at the reef, opposed to snorkel time with the actual mantas themselves. We were lucky, it didn’t take for the boat and spotter plane to find some and in no time at all L and I found ourselves surrounded by a handful of circling mantas, pursuing a female in an elaborate underwater courtship dance. 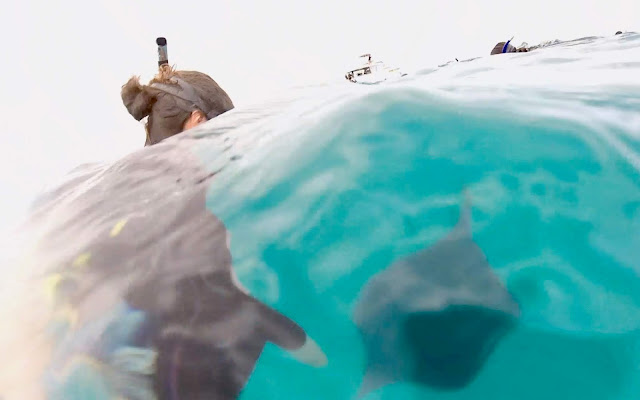 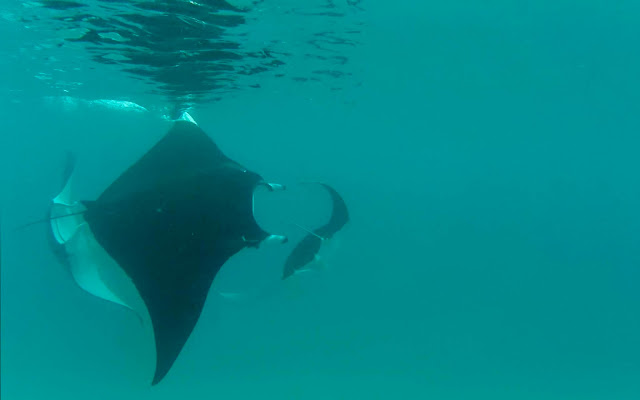 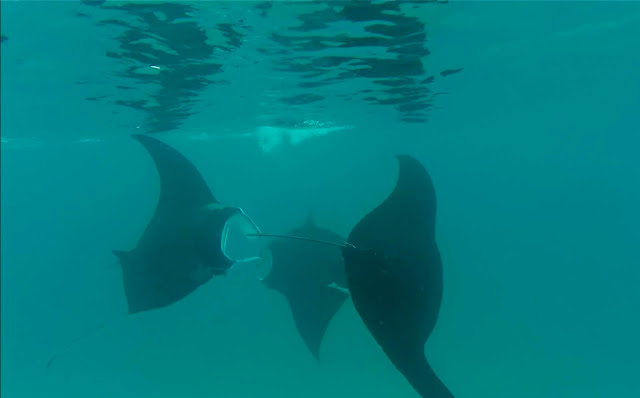 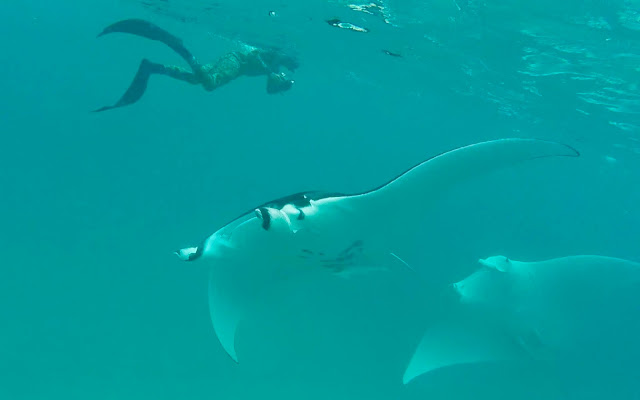 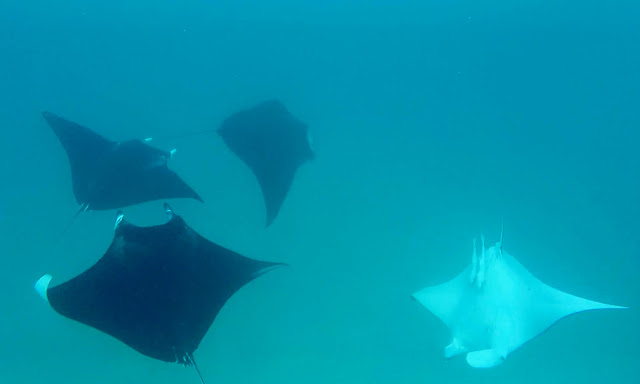 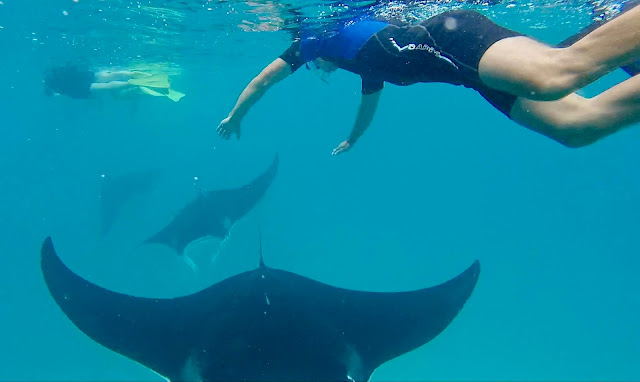 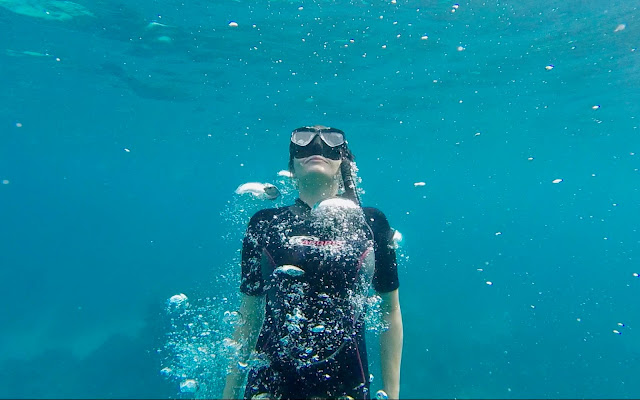 Our time along Western Australia’s stretch of Ningaloo reef had been awesome. Various beaches in Cape Range NP and also at Coral Bay offer great reef snorkelling straight from the waters edge. We only experienced one hair-raising moment when we both drifted over a huge stingray which resulted in a lot of splashing and directional change. Sadly not caught on the GoPro but check out our snorkelling vids on our facebook page and on the links below for the whales and mantas. Enjoy. 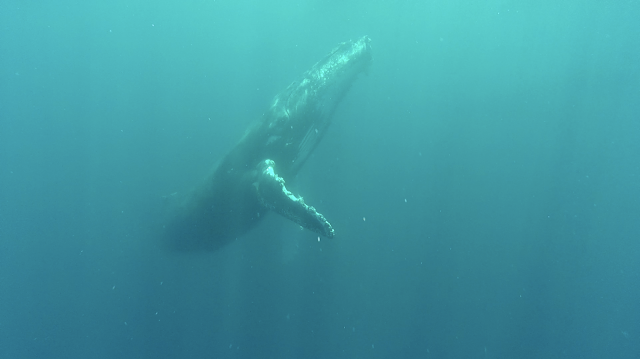 NEXT UP: Shark Bay, Shell Beach and Monkey Mia! The last of our beaching around before Perth.

Unknown said…
I enjoyed the trip ever so much...the beautiful color of water to show the whales, mamta rays & you guys together...WOW...again thanks for sharing...see you next trip...love to you both...be safe
23 September 2018 at 21:19