64. WHAT!?! THERE'S ANOTHER COUNTRY WITHIN AUSTRALIA...OBVS WE HAD TO GO! 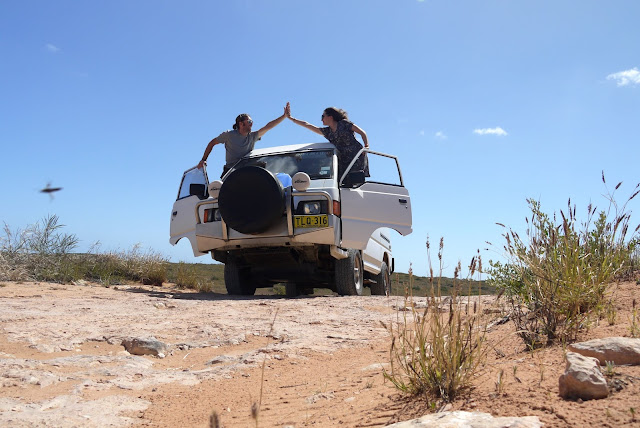 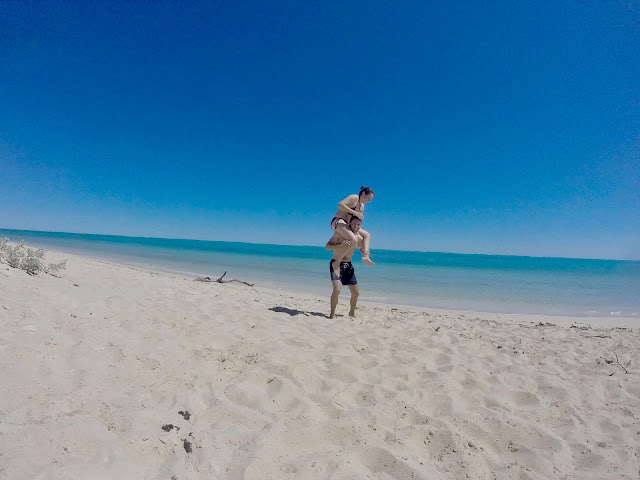 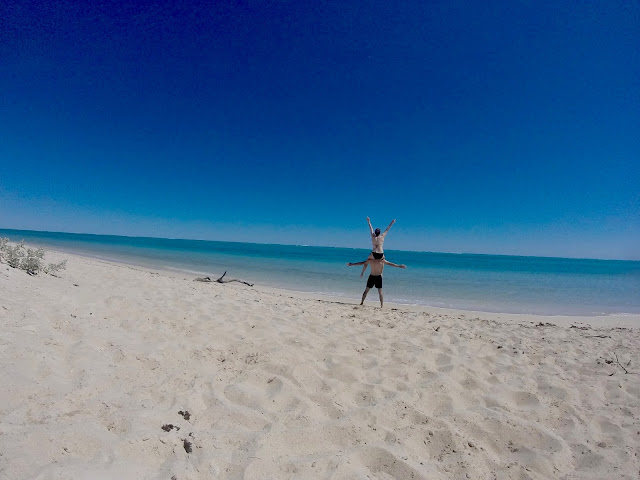 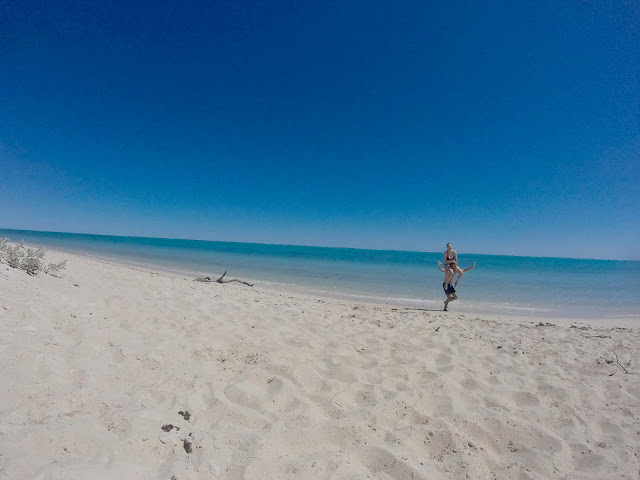 L and I often referred to our fellow free campers as ‘side people’. This had come about when one morning a slip of the tongue resulted in my blurting out “Are the side people still there?” I hadn’t meant for those words to exit, in my head I was asking if the other campers had already packed up and gone. Needless to say L found this highly amusing and ever since, the side people question has been asked most mornings.
The German side person knocking at the window had come to ask if we’d like to trade a bag of pasta for a couple of bottles of beer. We didn’t need to think much about this proposition because the beers in question were a German import and therefore somewhat appealing to L, who had now grown a little tired of Australian XXXX lager. A bag of pasta was thrust in the direction the German side person and we ended up spending a long time chatting. 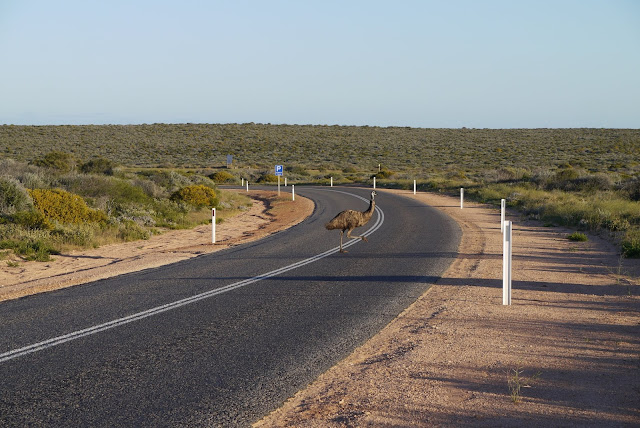 The previous day’s freak rain shower seemed to bring us a couple of instances of bad luck. The first being when our multi meter started to melt and aggressively smoke. We hadn’t used it  any differently to every other day, or so we’d thought. Actually it turned out that the wires had been connected to the wrong ports, possibly my own doing but I have no recollection of having changed them around at any time during the previous 24 hours. The second instance of bad luck was substantially more dramatic. Quick thinking from L and evasive action was needed in order to avoid a head on collision with a Maui Winnebago. The monstrous motorhome had veered completely onto our side of the road resulting in the immediate need for us to swerve off the bitumen and onto the gravel verge. Lucky it was a fairly flat transition but the back end of the Crampervan still kicked out. Then appeared another oncoming object. One of the many evenly positioned bollards along the verge of this road was now in our direct path and so we found ourselves having to swerve again so as to avoid another disaster. This all happened in a matter of seconds and we both felt the need to pull over for a few minutes in order to collect ourselves. It had been a close call!

At Coral Bay we snorkelled with Manta Rays (blog post #63) but this was also the place where we took the Crampervan on a short 4wd adventure along tracks up and over some huge sand dunes. We watched as a handful of other thrill seekers made countless attempts to drive up one particularly steep dune which had an awkwardly positioned bend half way up, only a few made it. 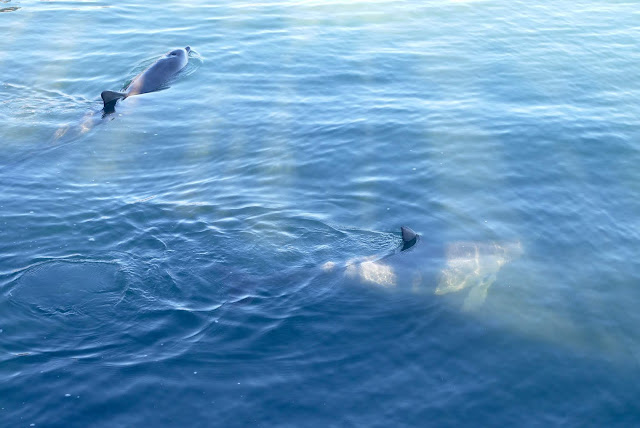 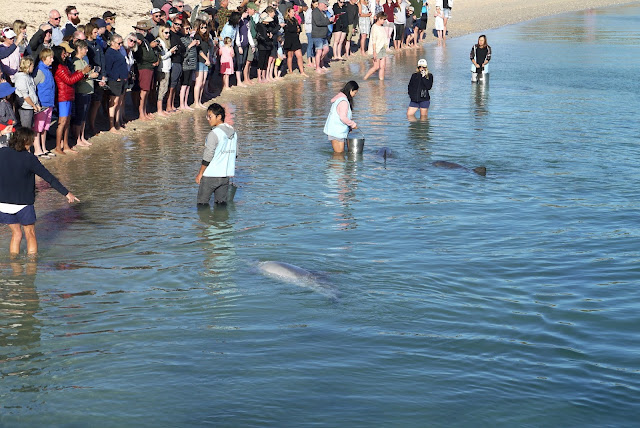 Continuing our coastal drive south we headed for Shark Bay which as the name suggests, is home to a large amount of sharks. Tiger sharks. L and I saw none of these monsters but the week previous we had seen a few smaller, 'slightly friendlier' sharks basking in the shallow waters of a bay at Coral Bay, known to be a shark nursery. Shark bay is also home to some very tame but wild dolphins and at a place called Monkey Mia, if they decide to turn up (which they do every day like clockwork) you can watch them being fed in the shallows. Note: the whole dolphin feeding experience was very commercialised, L and I had known this would be the case before we made the long drive up the peninsular but we were keen to see what all the fuss was about.

With no designated free camps in Shark Bay we decided to stay at one of the areas handful of ‘camping beaches’ and reluctantly we paid the council $15 to do so. A swing by shell beach was worth the extra few miles. It was like no other we had been to. A beach entirely made up of brilliant white shells, no sand. 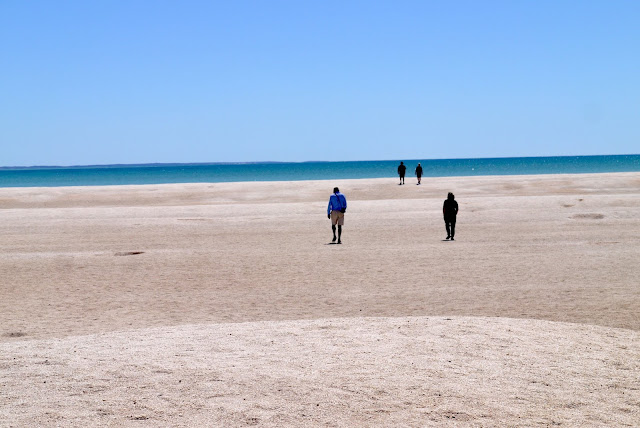 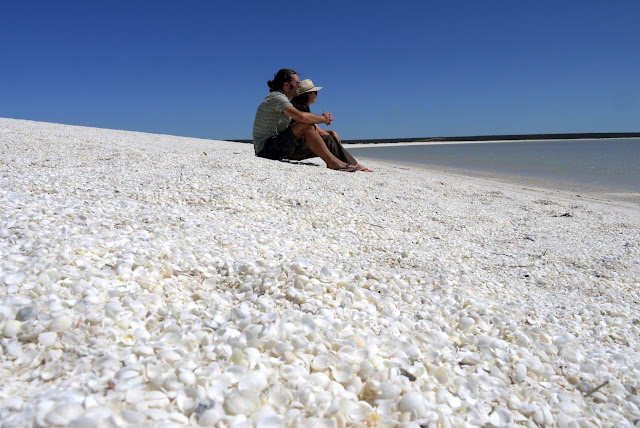 Over breakfast before leaving Shark Bay, L had been reading aloud an article about micro nations. I’ll admit to having initially not given L my fullest attention but that soon changed when he proclaimed that within Australia (Western Australia to be exact) there appears to exist… a separate country! This was exciting news to my ears. Neither of us had previously heard of the Hutt River Principality but there it was, not much further south from Shark Bay. This separate little country was open to visitors. We could camp, have our passports stamped and discover the unbelievable story behind how one disgruntled farmer back in the 70’s managed to declare his farm a separate country from Australia. Hutt River had just jumped onto our itinerary (the story is remarkable, google it) but first we planned to spend a day exploring the many different rock formations at Kalbarri National Park. 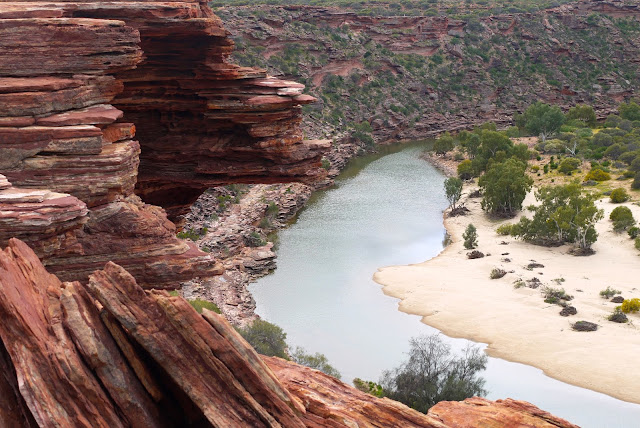 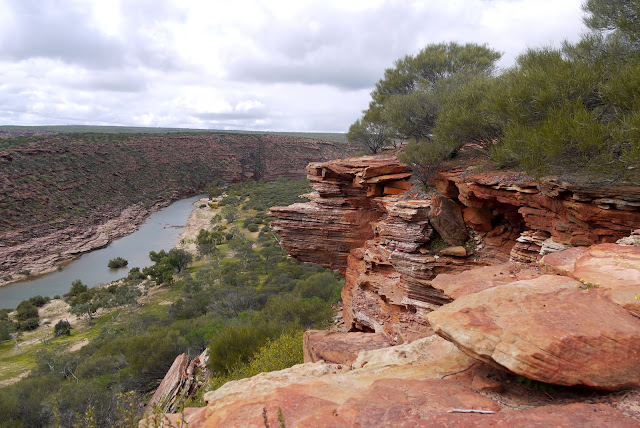 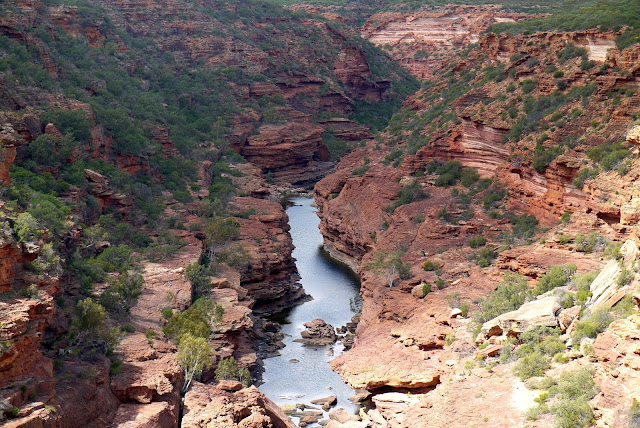 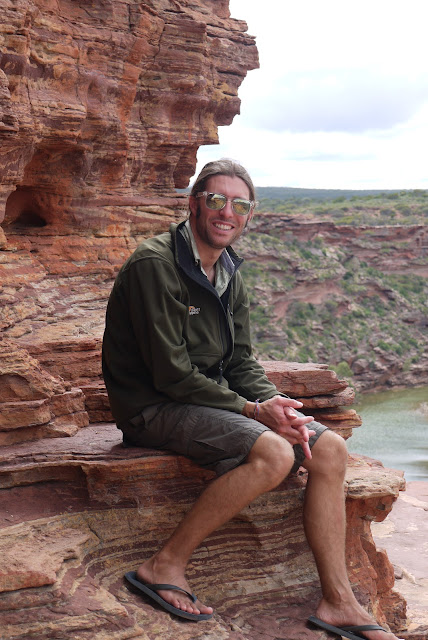 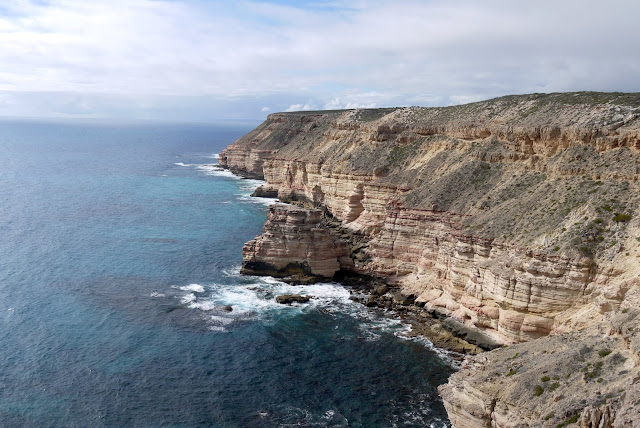 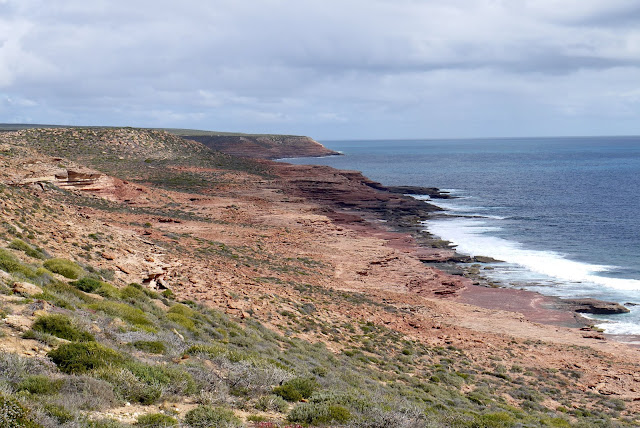 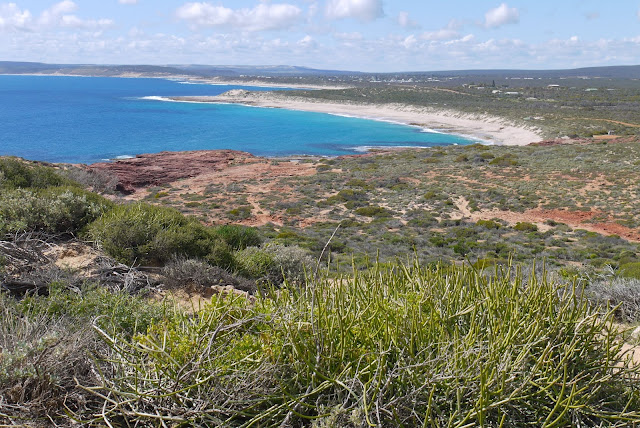 Our night at Hutt River Principality was sadly slightly spoiled by some very loud French who rocked up late, got wildly drunk and then ruined everyone else’s future enjoyment of ‘Non, je ne regrette rien’. Up until that moment in time I’d always thought it was such a beautiful song, now not so much. The following morning after an informative tour by ‘Prince Graeme’ (son of ‘Prince Leonard’ founder of HRP) about how HRP came to be we headed back out onto the main coastal road where another strange phenomenon popped into view... Only a pink lake! 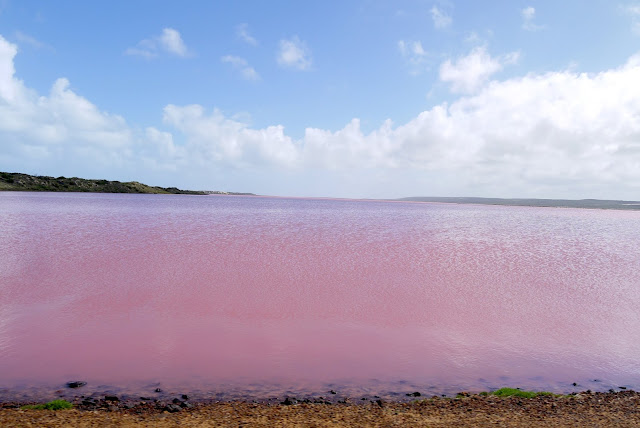 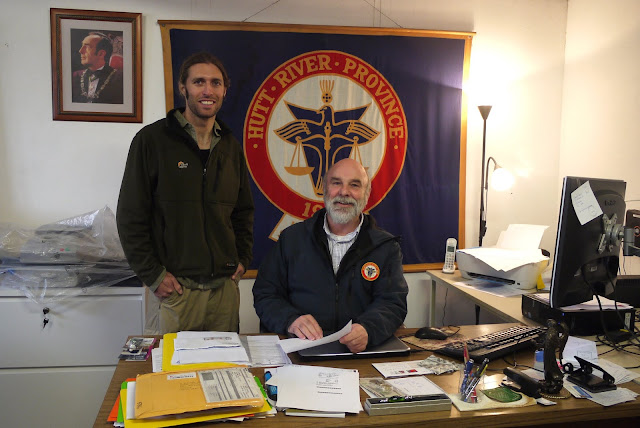 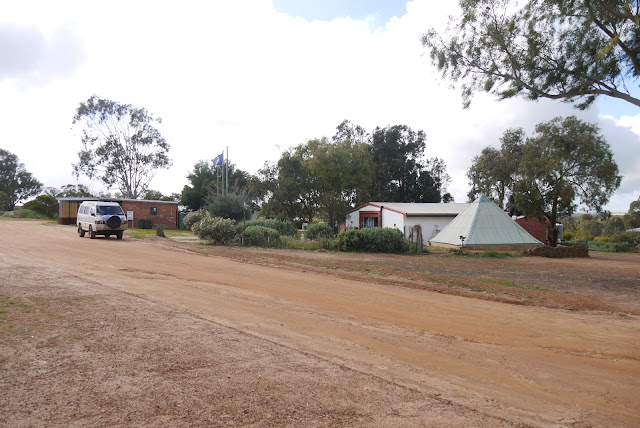 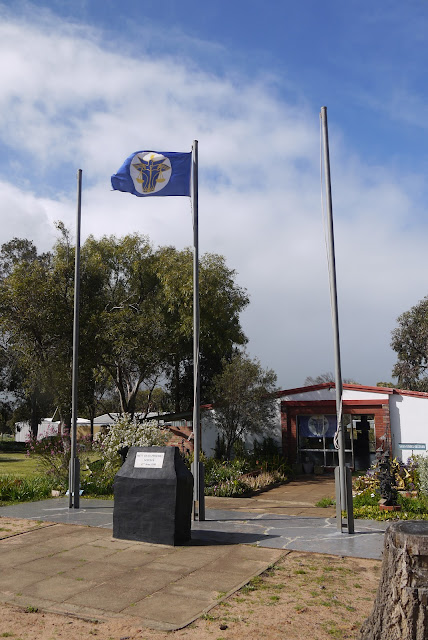 Somewhere between Shark Bay and Geraldton the Crampervan had trundled over an invisible line. The arid outback landscape that we’d been so used to seeing over the last few months had suddenly ended and up ahead popped green rolling hills and crop fields. At the same time L and I had noticed a definite temperature shift, it was getting cooler the further south we moved. It was no longer tropical, perhaps just ‘Britain in summer’. 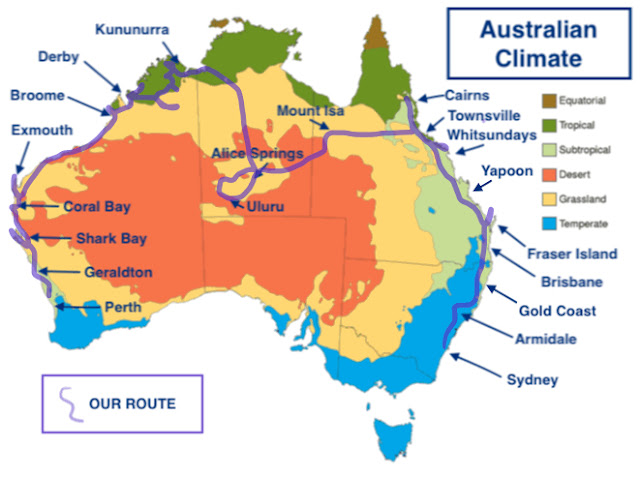 We were headed for Max’s place, an interesting timber and rammed earth block house situated on a large plot just south of Geraldton. We’d found Max’s place on the Workaway website and organised to stay a week to lend a hand in return for food, drink, lodgings and  to experience Western Aussie life. Max had built his house and wood workshop himself and there was no denying that they were super quirky. From tree trunk beams, glass walls, to balcony baths and fireman poles this place had it all, along with a slight hippy vibe. On the downside the washing machine was also fairly unique and required the water, collected in buckets, to be manually emptied into the garden to avoid flooding the outside utility room.
L’s help with Max’s wood working class lead to the pair of us being offered to exercise the neighbour’s horses and so one afternoon we followed Max’s mud map, drawn on the back of a tissue, to her block (Aussie for property). It had been a while since the pair of us had ridden so it was great to get back in the saddle. Max’s neighbour, rather trusting, allowed the two of us to take her horses out on a hack to explore the local area. We enjoyed every minute. The use of Max’s welder also meant that L could finally properly repair the Crampervan’s spare wheel bracket which had broken on a particularly bad outback road (blog post #59) and our stay also gave us the time to catch up on editing videos and sorting through photos (check out our recent videos on our FB page) but the week flew by and before we knew it, Perth was calling. 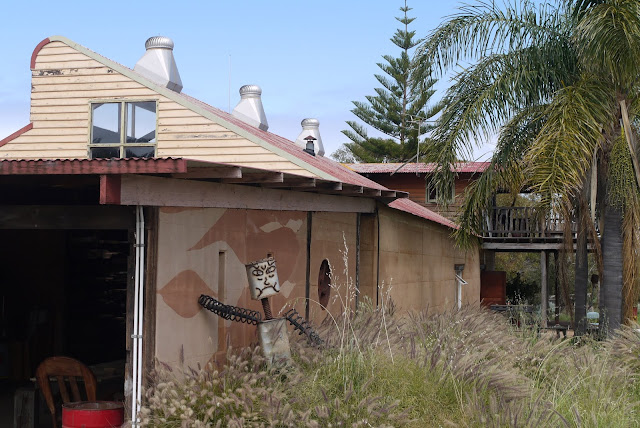 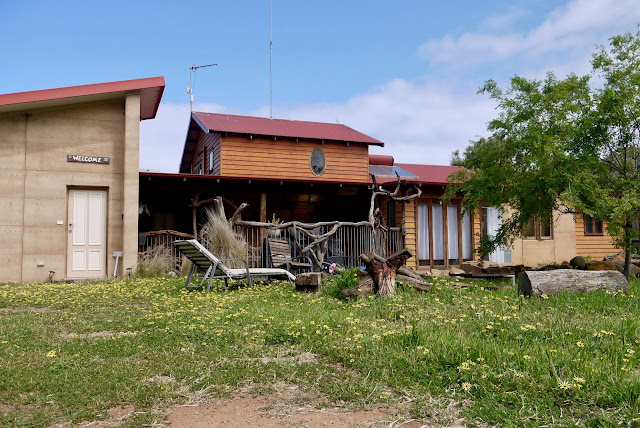 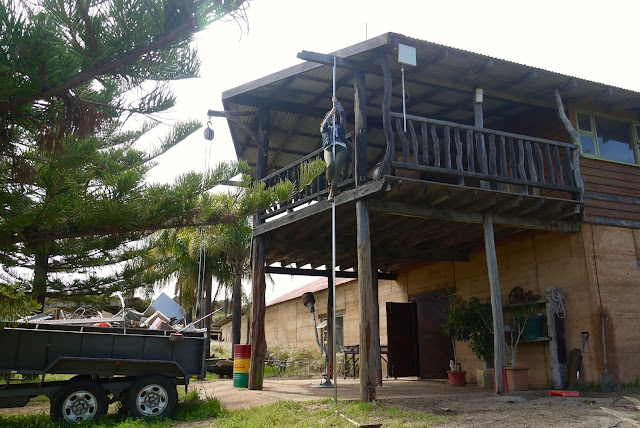 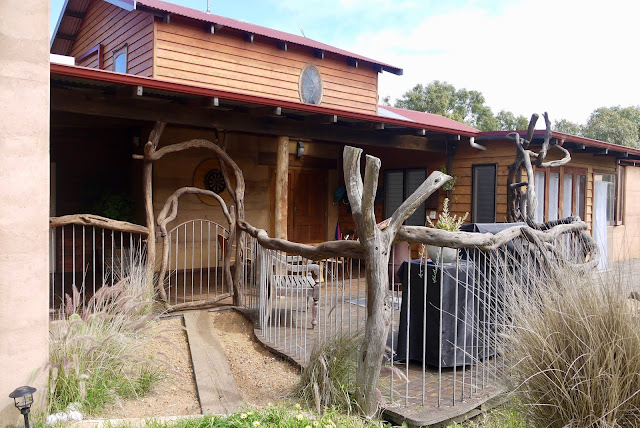 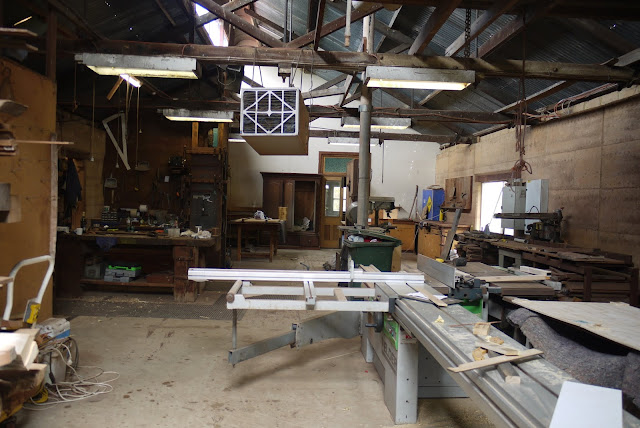 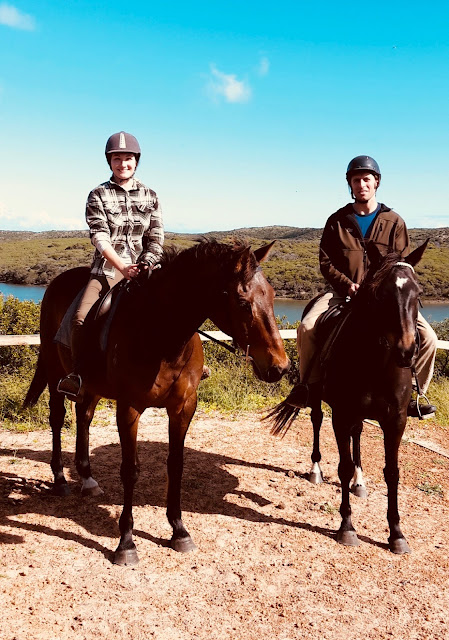 NEXT UP: The Pinnacles, Perth and a big surprise! …