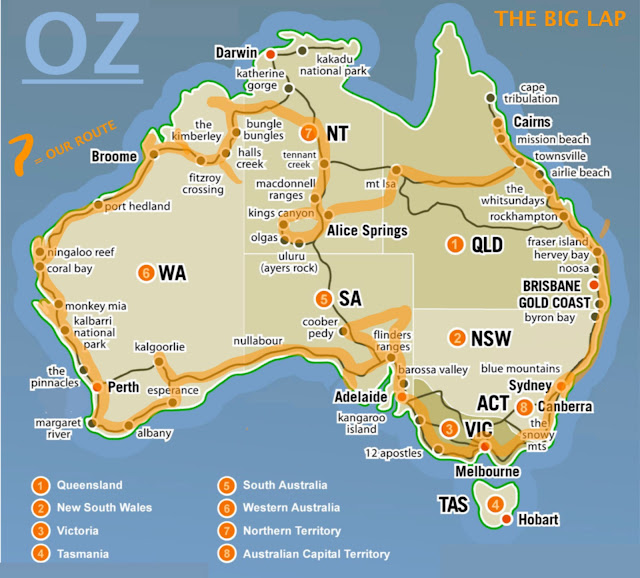 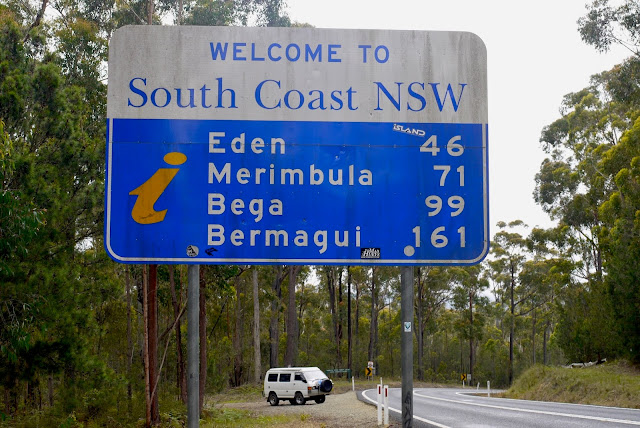 Crossing into the state of New South Wales from Victoria was a significant landmark. Although far less dramatic in landscape than some of the other state borders we'd crossed, in particular those in the outback, this border had zero spelling mistakes and meant that we were very much now on the home straight. G'day to the last leg of our big journey! A further 592Km (1410Km after all the beachy detours) and we would be back in Sydney from where we had started 11 months ago. 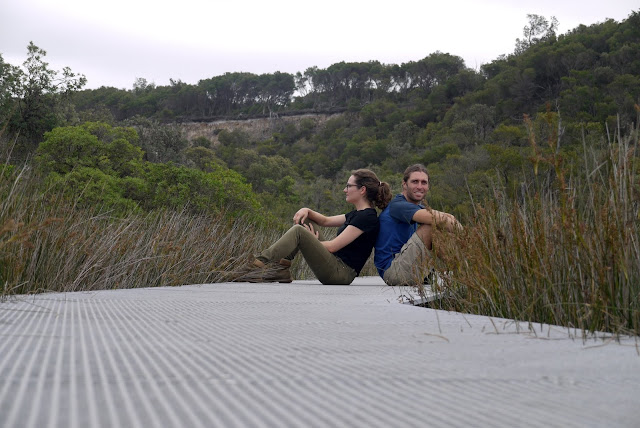 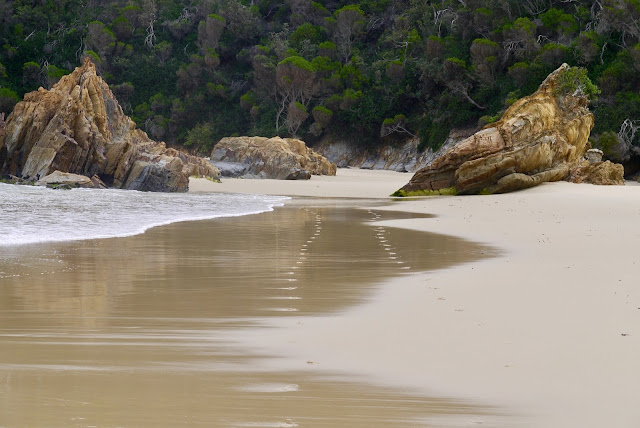 If we'd only stuck to the main road driving up this section of east coast we'd have missed a lot of the beaches and smaller towns which required short detours on spurs off the main road. Ben Boyd National park was one of those. Boyd's tower was under maintenance with part of the coastal walk closed off. We hadn't realised this until we'd walked 5 minutes to get there. For us this wasn't so disappointing, it was only a short walk and we'd decided not to pay the $8 NP fee because we couldn't physically fit it in the depository. For the people who'd turned up 5 minutes before us and wedged their enveloped fee into the last mortal of space in the depository box, I suspect the part closure would have been a little annoying. 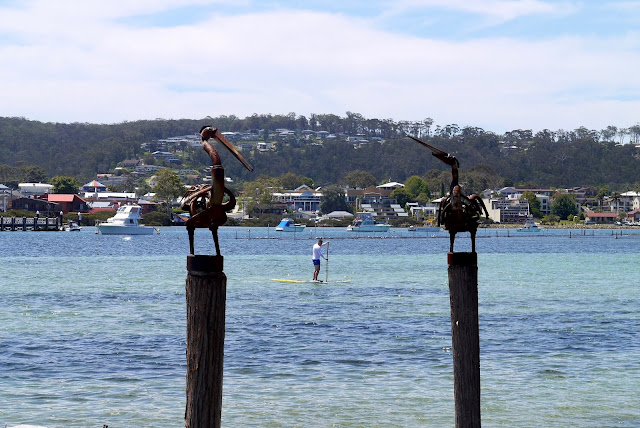 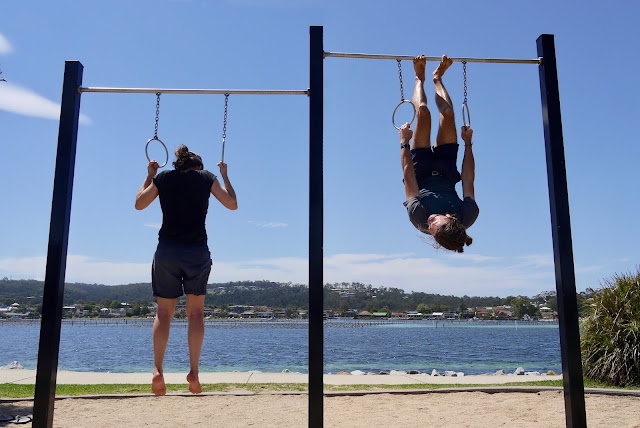 Merimbula has to be one of our highlights from this section of our trip. The most amazing sand bar beach and turquoise waters greeted us when we arrived and so we found ourselves spending most of the day chilling, swimming and eating the most amazing ice cream from a lady who was actually qualified (much to L’s delight) to use an ice cream scoop. 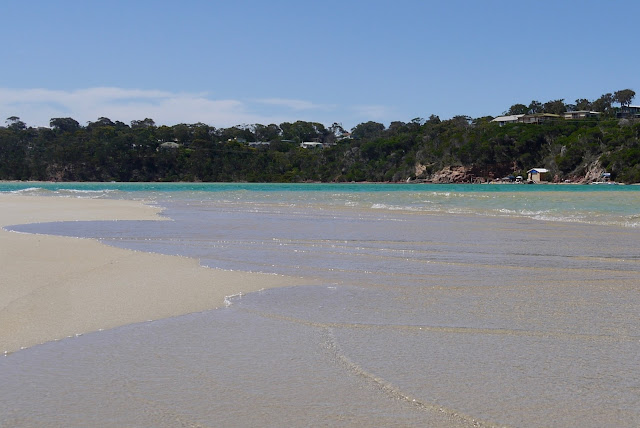 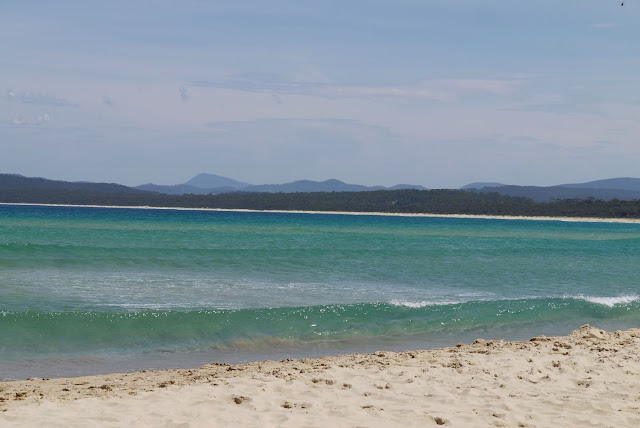 Continuing north we took the Crampervan on various tourist drives which wiggled along the coast and past forests. We spotted an old wizard man hiking through the trees in nothing but shorts and carrying nothing but two ski poles and we stopped off at various beaches and rock pools. A 'not so official' free camp close to Narooma turned out to be one of the most peaceful idyllic spots we'd chosen in a while. There was essentially a space big enough for a couple of vehicles to park, just off a track which followed the river through the state forest. This was another great opportunity for L to catch (and release) his first Aussie fish but again it turned out to be another fishing failure. Worse still, between the two of us we managed to loose three lures with one ending up in tree behind us. Fishing will no longer be mentioned in the blog! 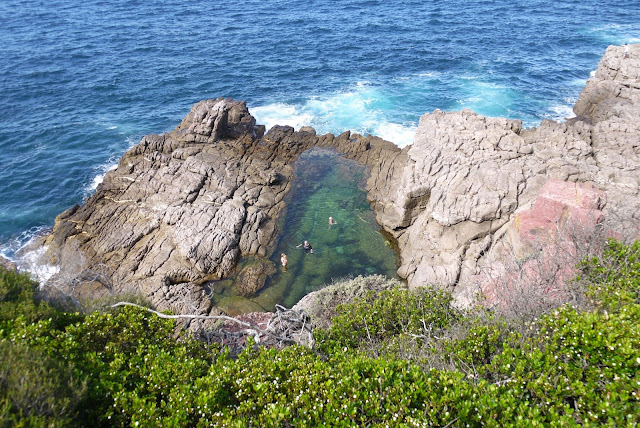 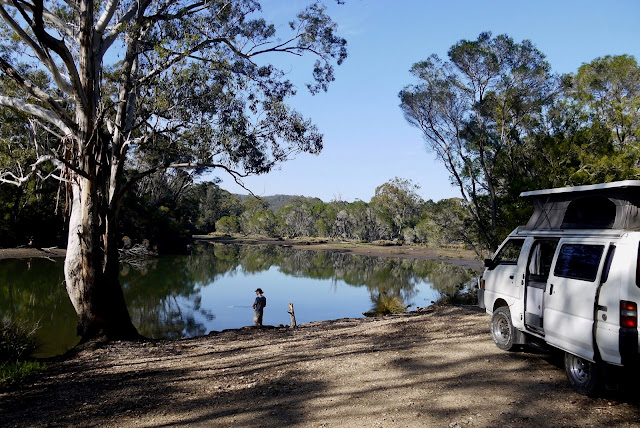 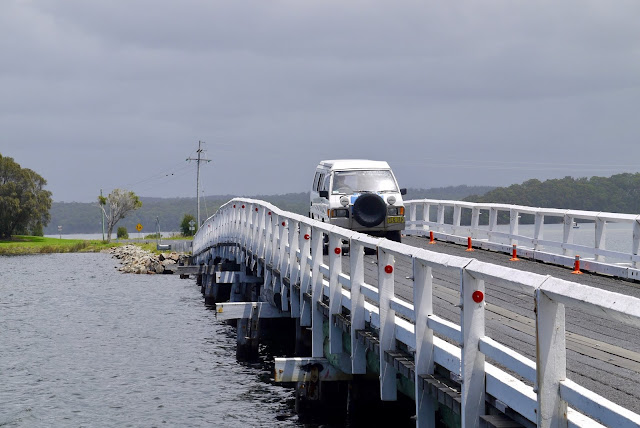 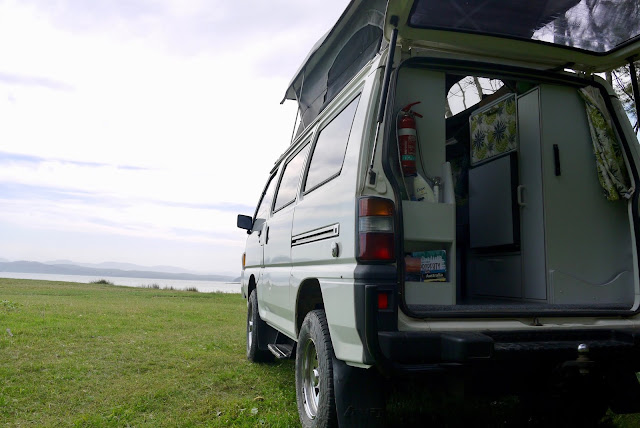 As we approached Sydney a few Crampervan related issues needed addressing. The first was to mentally accept that we would be needing to sell our small movable home within a couple of weeks. This was followed with needing to make a start on the associated admin. After putting a ‘for sale’ advert together the realisation of how close we were to the end of our trip started to set in. The Crampervan was due another routine service and the equivalent of a new MOT would also be needed for the sale. Trying to estimate a week in advance what town we might be close to and trying to book a mechanic we’ve never used before, is always stressful. There's also extra stresses because all of our southern hemisphere possessions are housed in the vehicle and the vehicle, as well as being our home, is also our only transport and so anything longer than a 'while you wait service' (which Aussies don't seem to like doing) can be inconvenient and problematic at best.
Batemans Bay was the town we'd managed to book the Crampervan into for the MOT equivalent. It passed. This was also the town where we both bagged some excellent surf at a pretty little bay, subsequent to receiving body boarding tips from a 70 something retired police officer. The guy successfully put everyone under 70 in the water (literally everybody except for his wife) to shame. What a guy, he didn't look a day over 50! 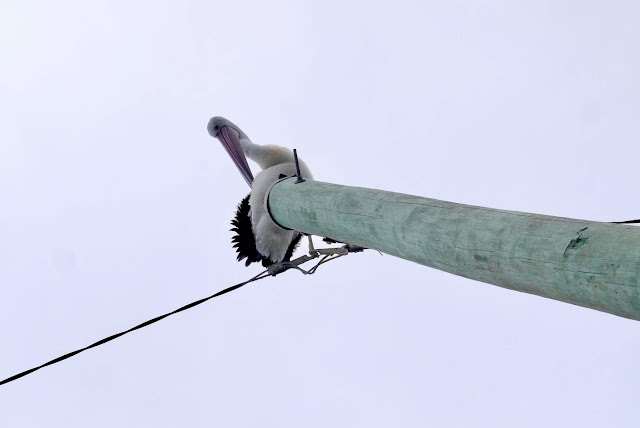 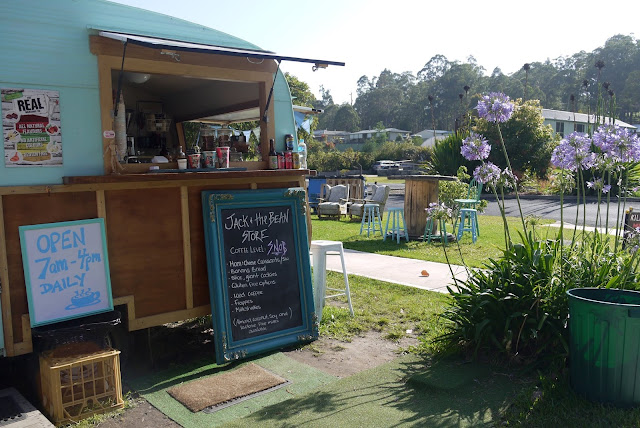 Jervis Bay is supposed to be stunning and home to countless beautiful beaches within the fee paying National Park. Don't get me wrong, they’re good beaches but switching on the beach snobbery, L and I agreed that they weren’t the best on this stretch of coast line. In fact we spent more time at Greenfields (a beautiful cove beach) actually just outside of Jervis Bay, than we did at those within the national park. The busy beaches within the national park did however present the opportunity for handfuls of inquisitive bathers to comment on our super compact lilos which we had to explain were actually inflated camping mats. (Sea To Summit if you're reading, expect an increase of sales.) 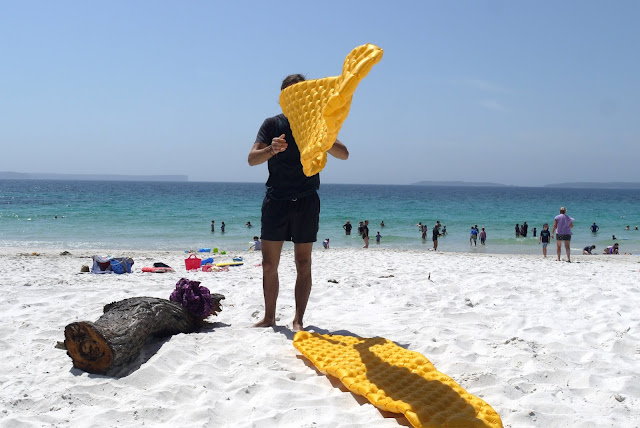 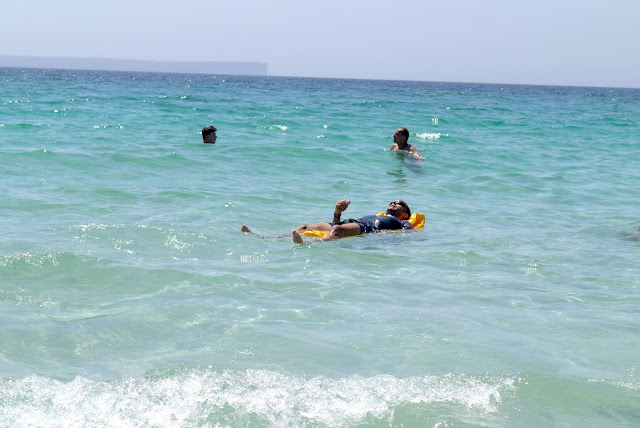 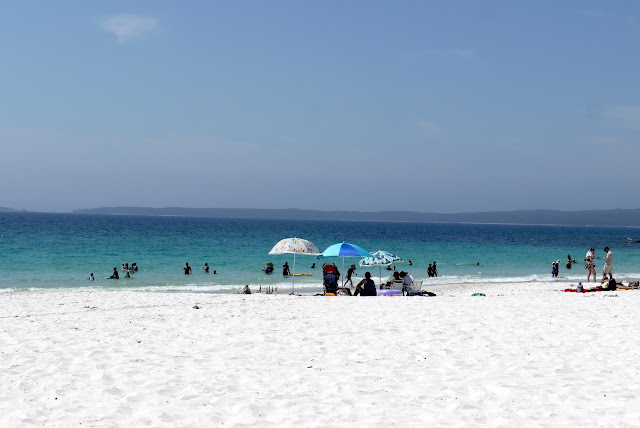 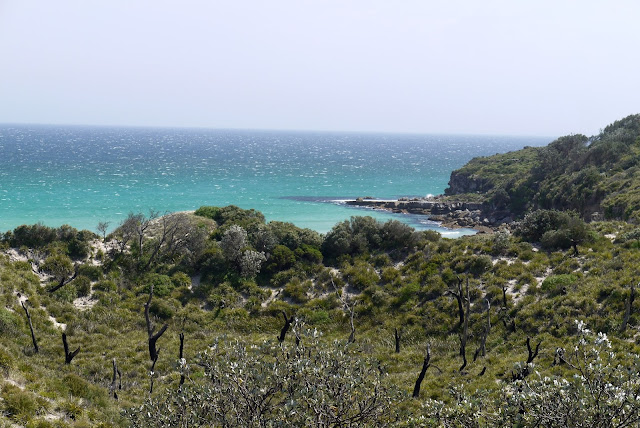 By the time we hit Wollongong things were heating up. Another day of mid thirties was followed by a sizzling day which topped out at 41'c (officially our hottest day yet!). This temperature was uncomfortable and after having driven inland to the small town of Picton, the heat from the engine continued to bake the inside of the Crampervan. With no sea to cool off in, we adopted a quirky pub with aircon and live music as our home for the remainder of the day. The following day the temperature was back down to the late teens and it went on to rain a little during the afternoon. A reprieve from the heat was welcomed as we trundled towards the Blue Mountains  which sit to the west of Sydney. 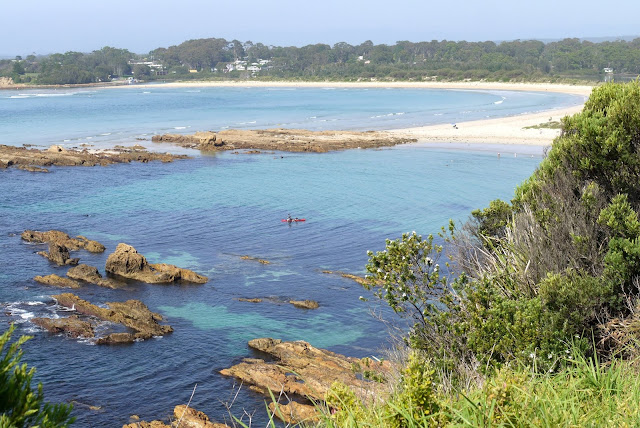 Aussie J had done a classic. He'd parked Sir Morris (I'm unsure as to the story behind their vehicle's unusual name) behind the Crampervan, facing the tent opposite and had forgotten to turn off the lights. It was 11:30pm and the sleeping man in the tent opposite had suddenly awoken to blinding light coming through his open tent door. Audible groans could be heard as he writhed around in bright illumination. The whole thing probably not too far away from some sort of torturous interrogation method.

Cousin E and Aussie J (from now on referred to as AJ) had driven over to the Blue Mountains to join us for the final weekend of our Australian overland Crampervan adventure! Their late arrival into an over crowded free camping area in the thick of the Blue Mountains had resulted in the 4 of us being those previously blogged about 'annoying later arrivers’. Luckily there would be no complaints as we chatted away until the early hours. Even the chap opposite had forgotten about his 'lightmare' by the time the morning came and he went on to strike up a completely incoherent conversation with AJ and Cousin E. We concluded this could either be due to the lasting effects of last nights shock terror or due to the chap’s excessive consumption of alcohol. 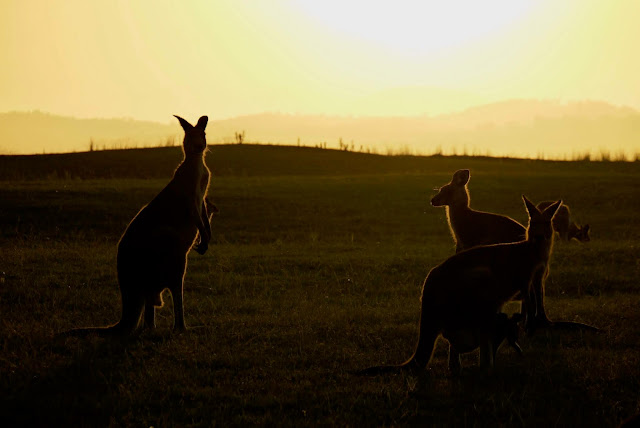 AJ and cousin E had promised us spectacular views over the Blue Mountains but by the time we'd driven up from the free camp in the valley below, a blanket of thick fog meant we could barely see three feet in front of us. AJ was quick to hold up his phone against the grey abyss and L and I stood there looking at the view on the screen. The lack of visuals didn't deter our spirits and the four of us set off on a bush walk which descended down into the valley via a billion and one steps. The hike down wasn't too taxing but the hike back up was something else! It was just about made bearable because we were able to strip down and take a dip in a cold pool at the bottom of a waterfall. Eventually the fog cleared just long enough to give us a glimpse over the Blue Mountains and later on we grabbed a quick snap with 'The Three Sisters' in the back drop. 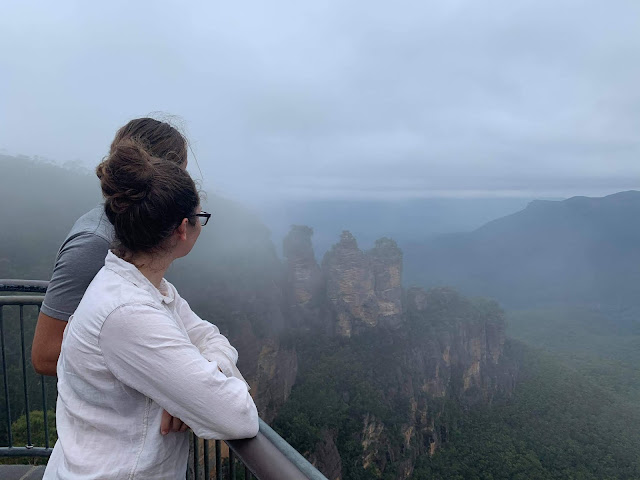 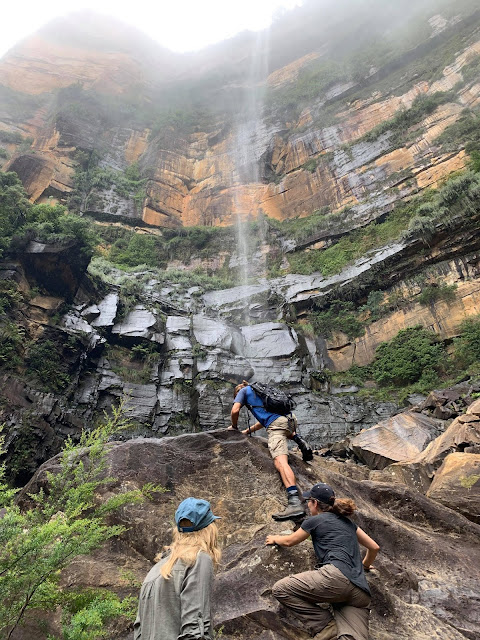 The recent advert for the Crampervan had drawn a fair whack of interest and it looked hopeful that we’d have a number of people ready to view it when we arrived back in Sydney. One lady from South Australia was particularly keen to snap it up the Crampervan and so arranged for her daughter to meet us in the Blue Mountains and have a look around the vehicle on her behalf! The next day we received a hand delivered deposit and together we arranged for the buyer to collect the Crampervan when we were back in Sydney in just a couple of days time. Neither of us would have predicted this happening and nobody else got to even see the van! This was a huge relief because both L and I had been agonising over the thought of not being able to sell the van during the brief window we were back in Sydney. 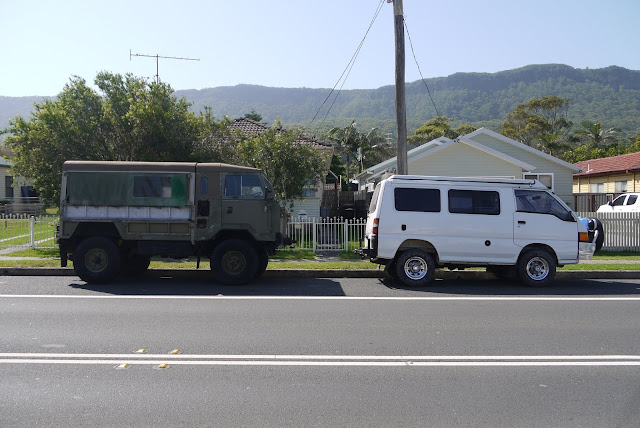 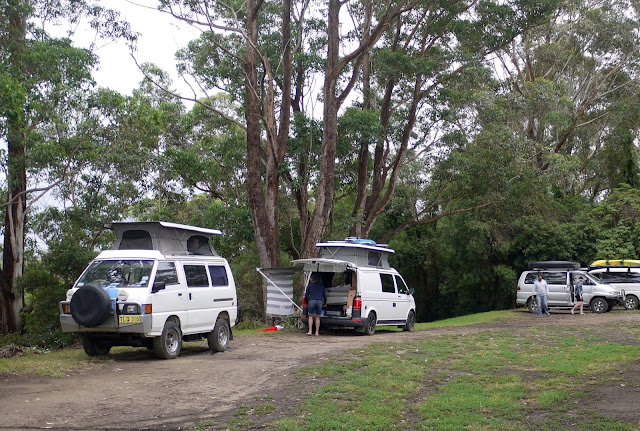 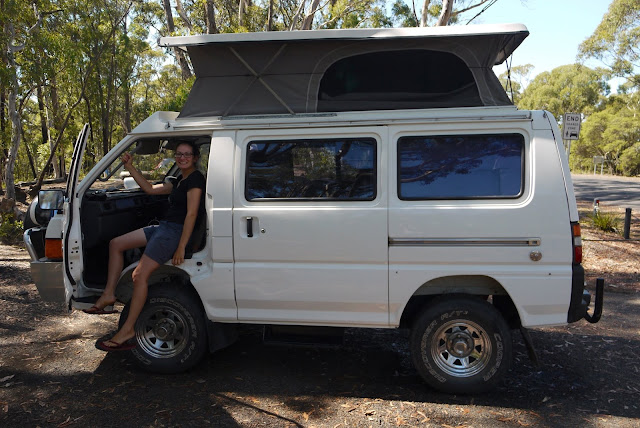 Our time back in Sydney was short but seamlessly coordinated with a family trio who were on their way back from holidaying in New Zealand, via a week long stop over in Sydney. This presented the perfect excuse for a return visit to Palm Beach, The Diner and Alf’s bait shop (if you watch Home and Away, you’ll understand what I’m talking about). This had been the first trip we’d made in the Crampervan 11 months ago and so it felt fitting to visit again at the end of our trip. 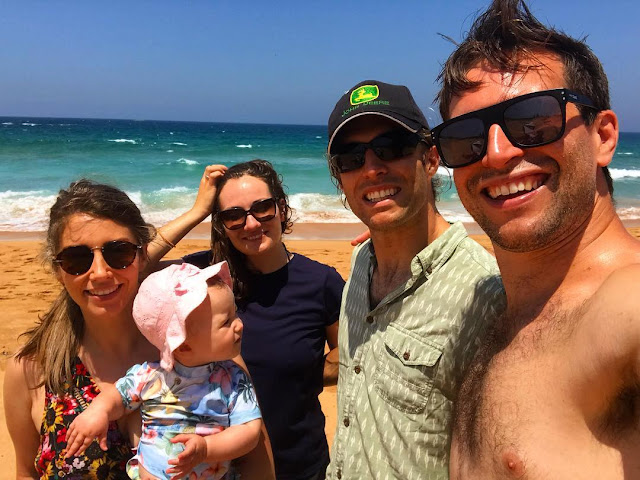 Our time in Australia had come full circle. Literally! This might leave you wondering what's next... Well our plans aren't small. L, having previously adopted the phrase 'go big or go home’ has tweaked it slightly to better fit our next chapter…. We’re going big and we’re going home!

NEXT UP:  OUR AUSTRALIA TRIP STATS, SUMMERY & THE BIG REVEAL!!! 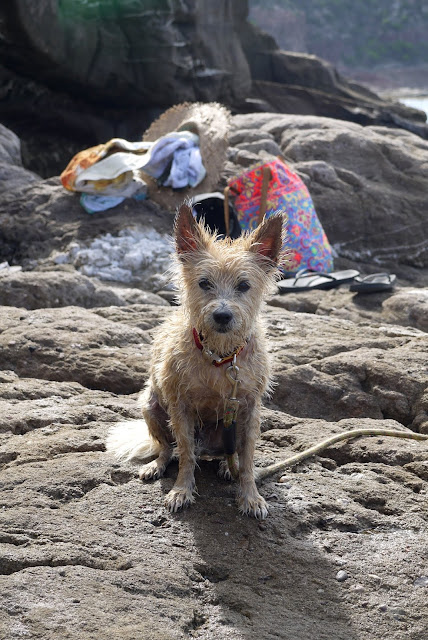