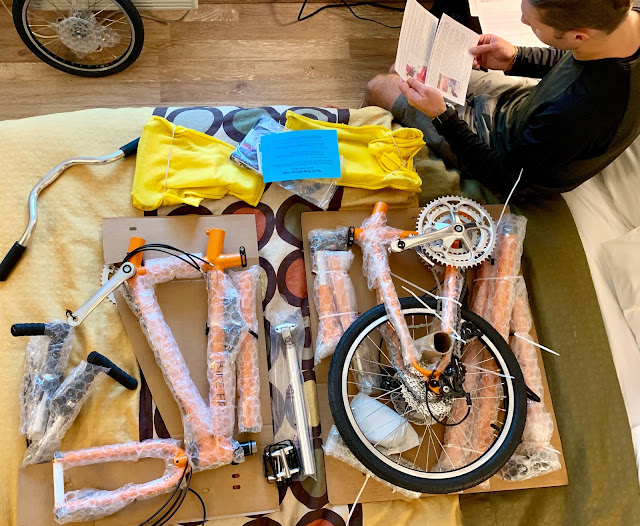 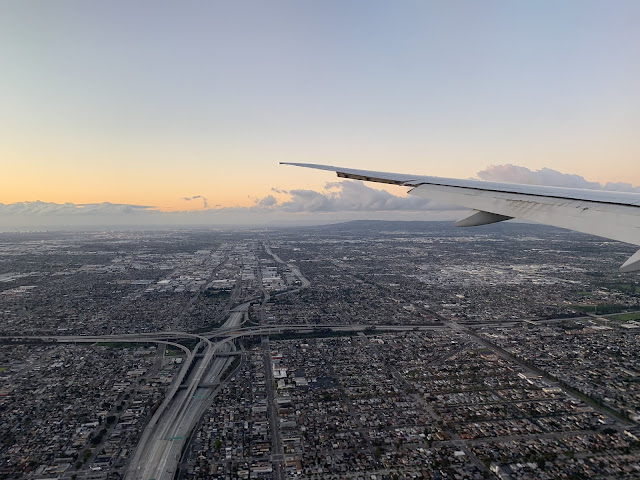 Breaking up the flights from Australia back home to the UK, by pedalling across the big landmass in-between, has brought a headache of logistics but somehow plans have fallen into place. We now find ourselves sat in our Sand Diego motel room eagerly waiting on a phone call from reception to let us know when UPS have delivered our parcel.

Inside the parcel will be a bright orange, 27 gear, compact tandem with 20inch wheels. It’s been manufactured in the USA by Bike Friday and will be delivered just in time for L and I to hop on and start pedalling 3500 miles, west to east! One thing’s for sure, ‘The Flying Fox’ as our new tandem will from now be known, should prove to be a major upgrade from our previous Chinese crisis (of a folding 20inch wheel tandem) known as ‘Tandy’. (Check out the early blog posts).

The lady on reception with the drawn on, inch thick, purple eyebrows had been most helpful relocating us to another non smoking room after our arrival. The new room didn’t honk of stale cigarettes and wasn’t located on the 4th floor, we settled for the 1st floor. Not quite the easy access ground floor room we’d envisaged when booking a motel opposed to a hotel, but the thought of lugging a tandem up and down one flight of outside steps is preferable to four. 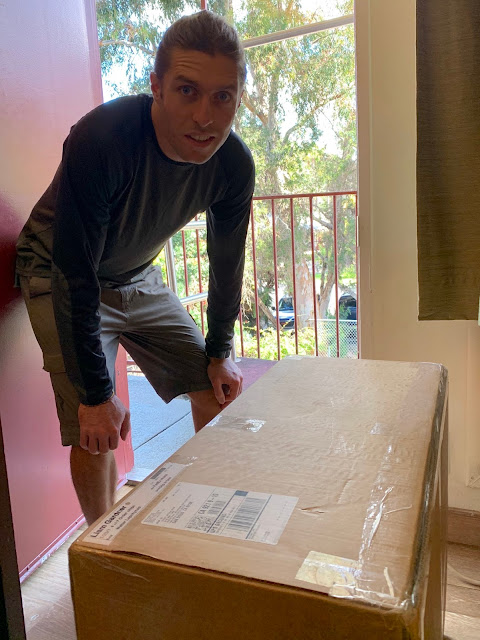 Prior to the arrival of the all important package, L and I had sourced one or two miscellaneous cycle related items for the trip. We’d also spoken to an enthusiastic T-mobile employee who helped us with getting a local sim card and who went further to assist with directions to the nearest supermarket. Apparently we needed to ‘get on the trolly’. Neither of us had any idea what this meant so instead we walked.

The eagerly awaited phone call soon arrived and before we knew it, we’d spent a couple of hours unpacking and putting together The Flying Fox. Working out how to cram on and attach all of our luggage, took a tad longer. Bungees at the ready. Say hello to The Flying Fox! 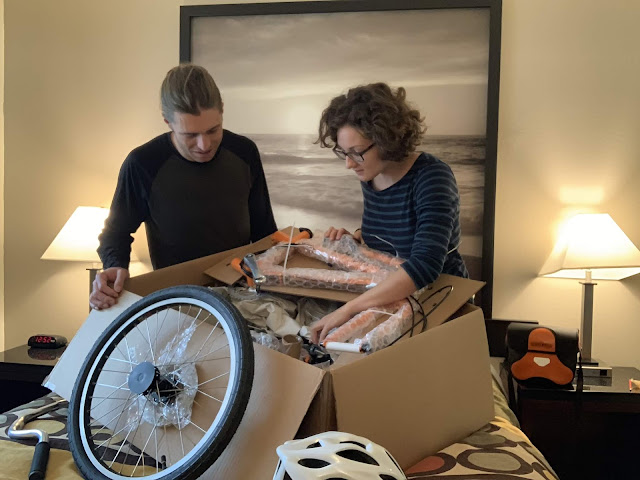 The flying Fox is made by Bike Friday an American company who specialise in small wheel collapsible bikes, purpose built in various load carrying configurations. They also happen to make a range of tandems and have kindly given us a discount because we will be raising money for charity and in exchange for social media updates.
Keen to sponsor our USA west coast to east coast 3 month tandem attempt?
LINK: https://www.justgiving.com/companyteams/foxonalead
Small print. Clause 1647: If we run out of peddle time before making it to the east coast, your generous donations will still be going to the good causes stated!) 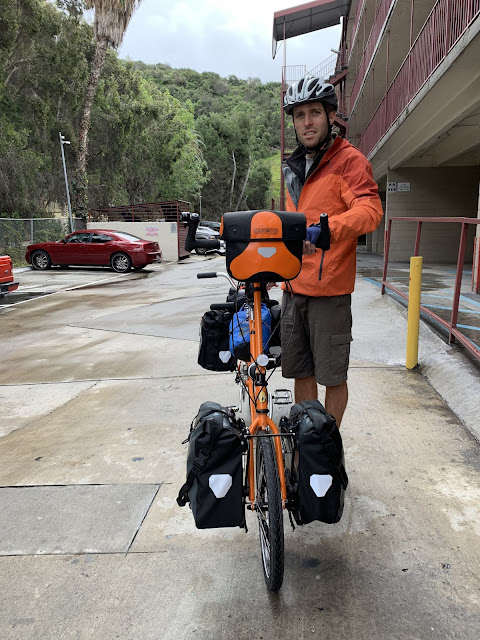 
Arrived at (without a doubt) the worst beach of the 300+ we’ve seen over the last 12 months. This marked the start of our cycle. Watched a grey rain cloud approach and a small ownerless dog take a shit right infront of The Flying Fox.
Within the first few miles we’d seen a lot: several groups of shady characters loitering or living (we’re not too sure) in the narrow cycle underpasses of San Diego. (In one instance we narrowly avoided running over a shady’s dog!)
An early dilemma caused a panicked moment: Do we double back, thus avoiding the man ahead of us who is bludgeoning a city rental bicycle with a huge rock? Or do we try to skirt around him, asking if he wouldn’t mind moving his stolen bludgeoned bicycle if there turned out to not be enough space? Decision: peddled fast and squeezed past, hoping not to get hit by any rocks. Result: No rock thrown and his mrs smiled and waved. L sung the words “Toto, I’ve got a feeling we’re not in Kansas anymore” (thankfully out of ear shot of everybody else) as we pedalled on.
The dark raincloud caught up to us as we headed out of San Diego into Mission Trails Regional Park. Took shelter whilst the heavens opened before checking into a motel early.  A grey day made for grey photos, blue skies for the week ahead. 50 Mile target: Not achieved. Excuse: Rained off. 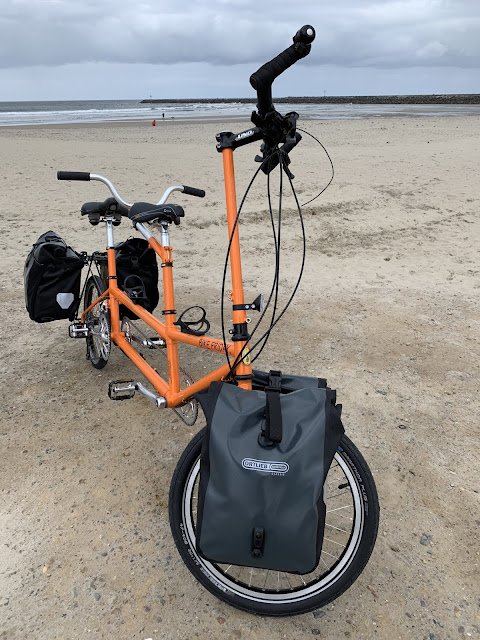 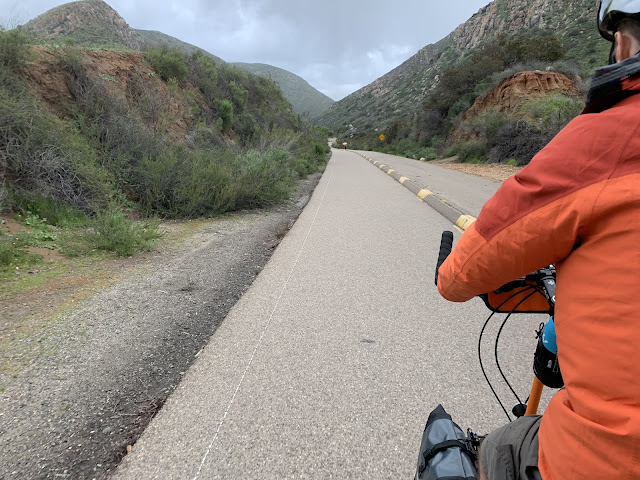 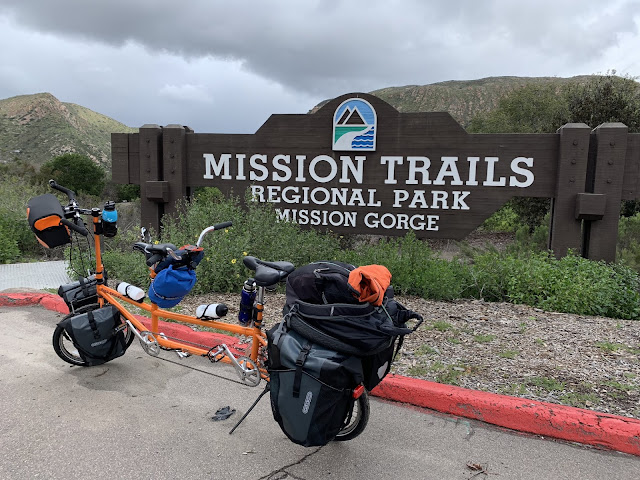 Keith said…
Great meeting you two yesterday as you worked your way through the rollers just past Glamis. I see good things in your future and hope you’re able to get to the east coast - whichever route you choose! (Rt 66 goes to Chicago- not the direction you want!). I posted a photo of you Crazyguyonabike - Back on the Road: Day 6 (https://www.crazyguyonabike.com/doc/page/?o=1mr&page_id=570883&v=Z) -hope you don’t mind!

Unknown said…
Hi, I followed an url here from Keith's blog. If you are following the Adventure Cycling Southern Tier Route, and have passed Glamis, then you have just passed some of the worst roads and hills of the tour. It gets better.
27 February 2019 at 06:41

FOX ON A LEAD said…
Hi Keith Thanks for the tag, we'll be sure to check out the Crazyguyonabike blog. As you can see we are a little behind with our blog posts! Thanks, safe travels to you guys.
27 February 2019 at 22:32

FOX ON A LEAD said…
Hi Roderick! Always good to know! We loved the sandy views through Glamis . Got a bit of catching up to do on the blog posts.
27 February 2019 at 22:34