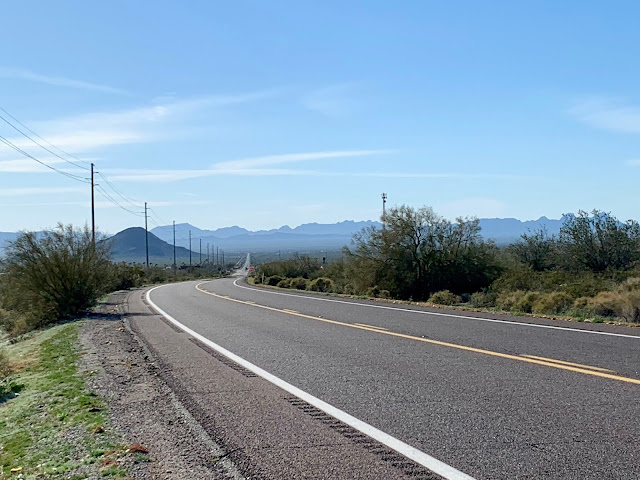 27/Feb. Day 7. Palo Verde - Quartzsite
42 Miles. The morning after the strange night before.
Last night we had to emergency camp. How this came to happen is as follows: L's ‘Warm Showers’ host (as lovely as he turned out to be) lived in the most dilapidated porter cabin style home either of us had ever seen. No amount of staring at the numbers on his gatepost would change that we were standing outside the correct property. We went on to discover that the inside of the house reflected the outside. J was a hoarder. Small walkways through mountains of ‘stuff’ enabled limited movement throughout his home. Cleaning also wasn't a top priority and I suspect it hadn't been for the last 10 years. L's asthma started the flare up, we couldn't stay. J seemed genuinely disappointed that we wouldn’t be staying because he enjoys to meet and host touring cyclists, but tonight it wasn’t meant to be. With just enough light, we pedalled back a couple of miles to where we’d passed a basic camping area.

A & R’s turkey sandwiches in the town of Blythe made for the best bakery lunch I think we’ve ever had and then arrived the mother of all chocolate brownies, not much smaller than a brick. Sometimes you have to treat yourself. Bloated and with a stitch we pedalled on to Quartzsite. Quartzsite was larger than either of us expected. We stocked up at the Jerky store and rattled on to our campsite, where we met Hank and Kathy who are on an amazing cycling tour of all the US states. 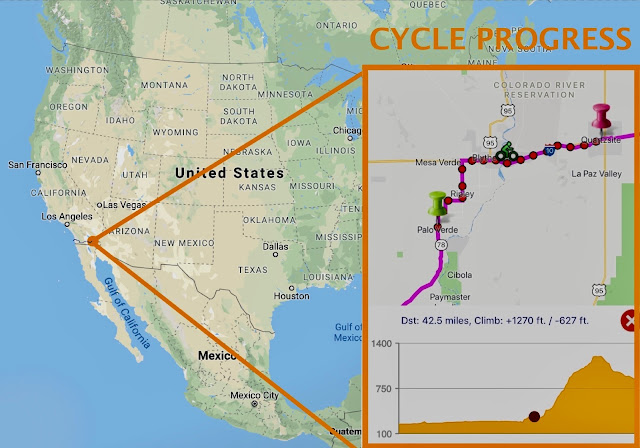 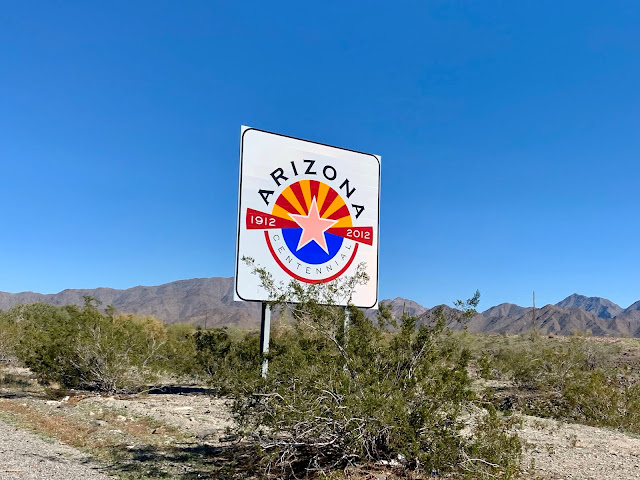 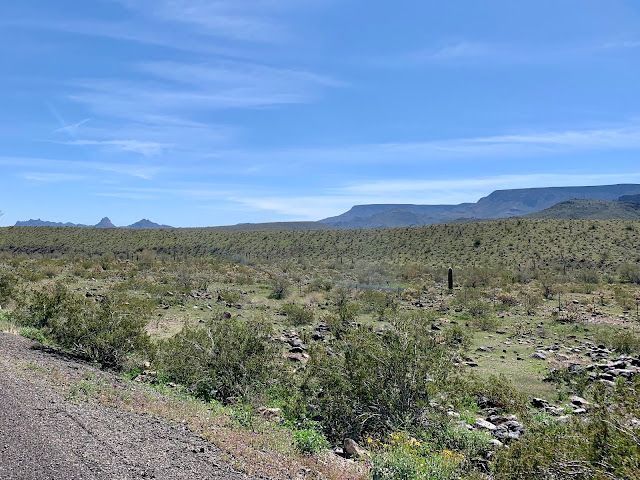 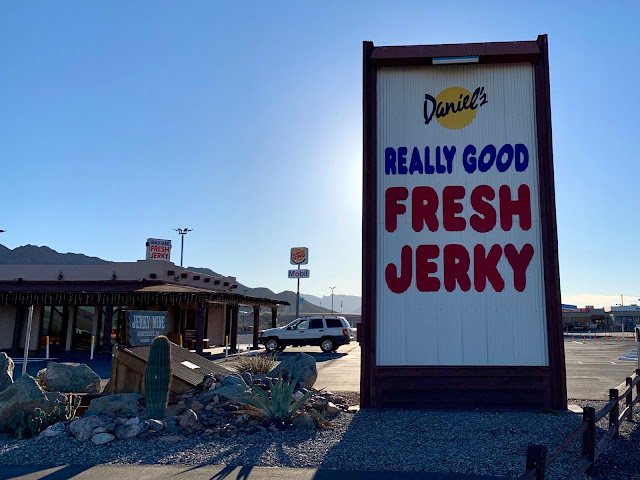 28/ Feb. Day 8. Quartzsite - Salome
43 Miles. Double bad luck in the desert.
After stocking up on too many bags of free cherry tomatoes thrust on us by the campsite owners, we headed for Salome. The route took us back onto a minor road after another unavoidable stretch of Interstate highway. Then we were dealt a blow of double bad luck: a puncture and broken spoke on the rear wheel all at the same time! Our minor desert road wasn’t the most ideal of places for this to happen but we were carrying a ton of water and food so it seemed about the right time to break for lunch. L changed the inner tube, taped up the broken spoke and we made sure the wheel was still running true. A handful of spare spokes should have been delivered with The Flying Fox but they’d been forgotten and recent snow storms up north, had delayed Bike Friday in sending some out to us whilst we were on the road. It was typical but just one of those things, so for now, the wheel just needed to hold for another 85 miles because we were a couple of days out of Phoenix.
Oddly, two cyclists passed in the time we were breaking for lunch and repairs, both offered help but there wasn’t anything either could do. The wheel held up for the rest of the day until we reached an out of town camping area which was part of a desert golf course. A group of tipsy ‘Snow Birds’ (retiree’s who migrate south in their big rigs to the warmer states over winter, a similar situation to Australia’s ‘Grey Nomads’ who migrate north for the same reason) were gathered around an evening campfire and took delight in joking around with the two Brits who'd just rolled up out of nowhere on a small wheeled tandem. They lent us a hammer and then a mallet to bash our tent pegs into the dry gravel earth and when their party was over, golf buggies whizzed off to the big rigs scattered around the site. 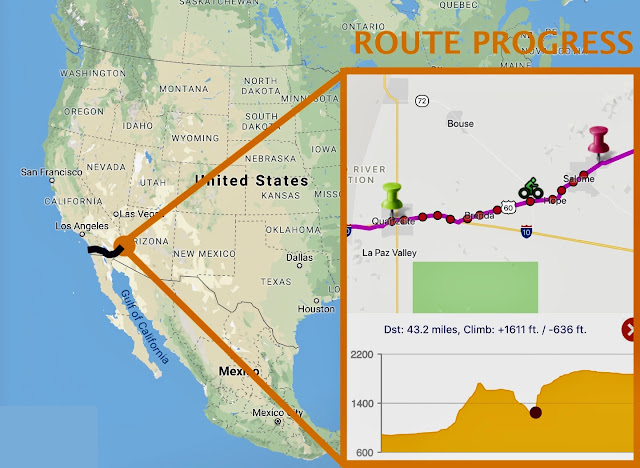 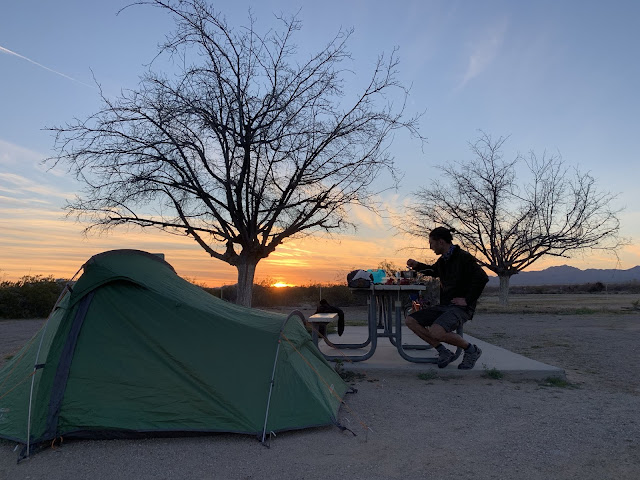 1/Mar. Day 9. Salome - Wickenburg
51 Miles. Cowboy Diners and camping.
This was a day of gradual but continual uphill ending with a downhill coast into the town of Wickenburg, passing through… not much in between. A chance to grab a cowboy lunch at the Coyote cafe diner on the way out of ‘one horse town’ Aguila was too tempting a treat to cycle on past. The diner was how you’d imagine, customers sat in booths and on bar stools along the counter and a single lady rushing around taking orders and topping up coffee. L and I spent and hour soaking up the atmos, we also over indulged and so a good chunk of that time was spent trying to force down the apple pie and ice-cream we’d ordered for pudding. The American sized burgers and fries would have been enough on their own.

On the small patch of lush green grass we’d been allocated by the kind owner of an RV park in Wickenburg, who brought out fluffy towels and an extension cable from her garage, we met Fred (who was one of the chaps who’d cycled passed us when we were broken down yesterday). Fred is also riding the Southern Tier in our direction. A few days ago Fred had spent two days cycling with Larry, who is riding a recumbent bicycle. Larry was a couple of days behind us, but L and I already knew this from Keith and friend who’d met Larry in the mountains out of San Diego. L and I haven’t met Larry but four days ago Keith and friend met Hank and Kathy, who’d we’d bumped into two days ago. Following? We were finding it quite amazing how a spiders web of connections were building for bicycle wanderer’s travelling in both directions of the Southern Tier. 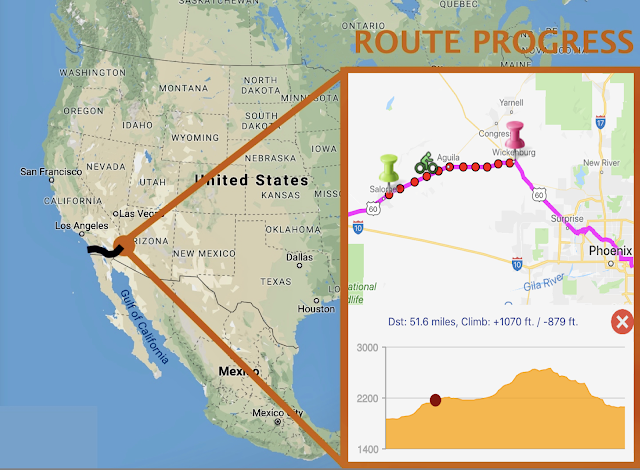 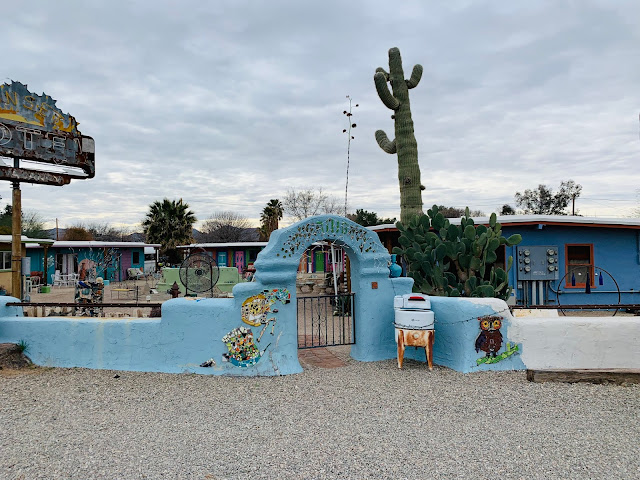 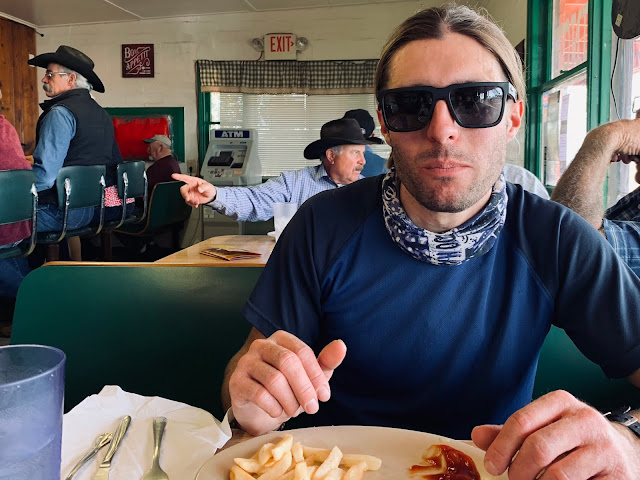 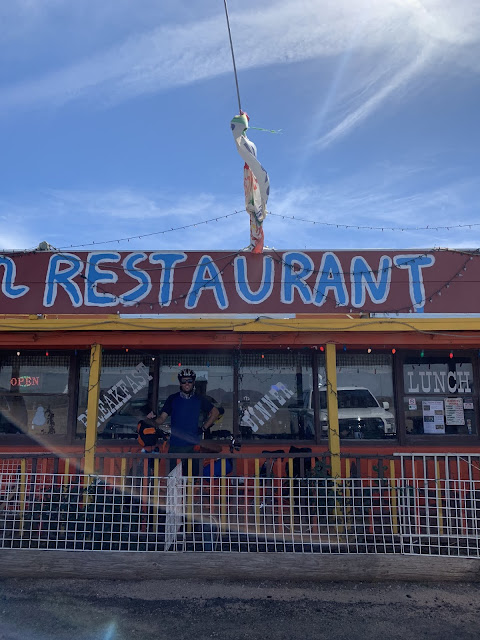