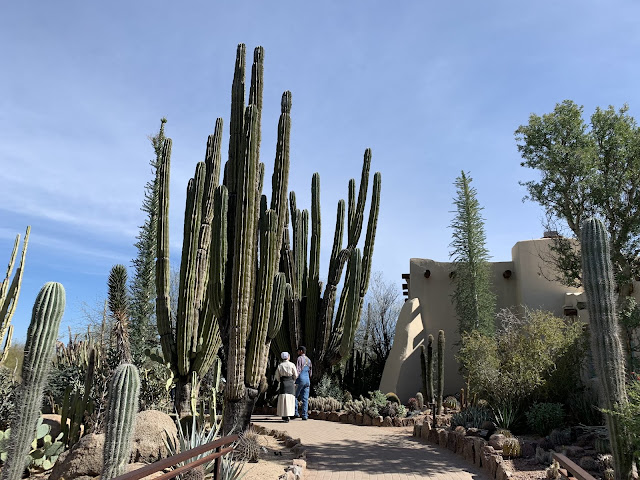 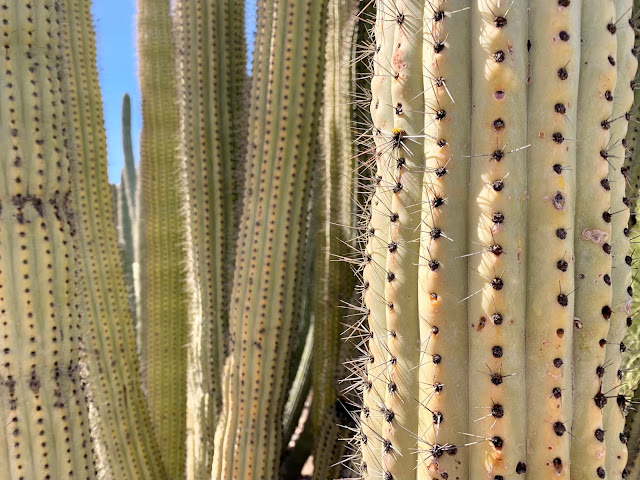 2/Mar. Day 10. Wickenburg to Surprise
31 Miles. Terrain: gradual downhill. Quick fix at the bike shop.
L had pinned the closest bike shop, on the outskirts of Phoenix, to repair our broken spoke and we rolled in just before lunch. We spent a while in the shop chatting to the guys whilst they fixed the spoke and generously went further, giving The Flying Fox a service. L couldn’t have picked a better bike shop, these guys were awesome, we really appreciated their help. They are Build A Bike, if you happen to be needing a bike shop near Phoenix. With the new spoke fitted and a handful of spares now in our possession we headed over to Jerry’s in Sun City; a 40,000 strong population of over 50’s living in one huge, perfectly manicured, retirement town. Jerry is over 50, in fact he’s 81 but he doesn’t look it. As well as being an avid cyclist, Jerry is also a pilot and yesterday he flew his light aircraft over to Tucson, just to breakfast with friends. We like Jerry, he has restored our faith in using ‘Warm Showers’. His place is immaculate, he has loads of interesting stories to share and he is generously taking us out for dinner this evening. 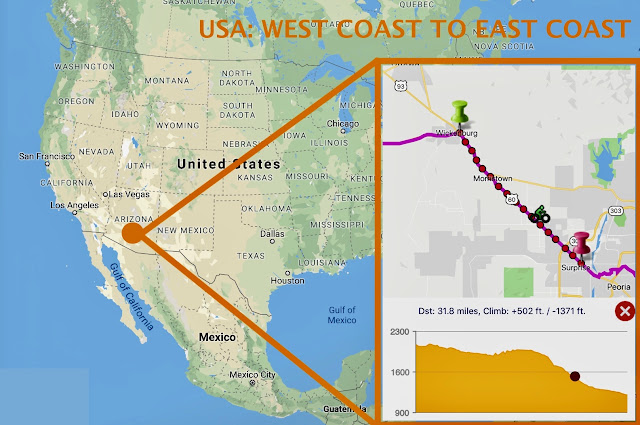 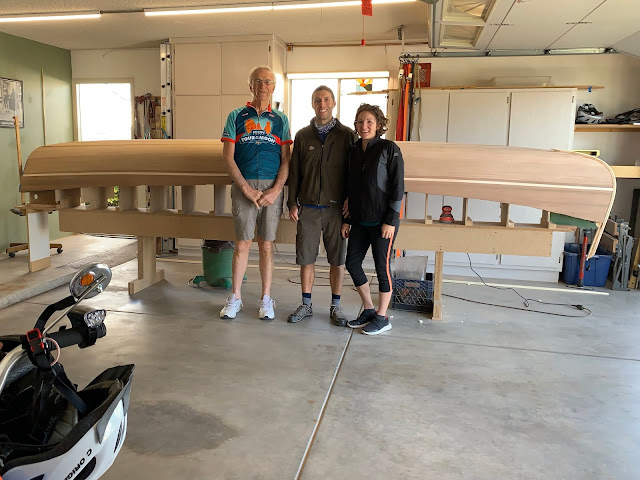 3/Mar Day 11. Surprise, Phoenix to Scottsdale, Phoenix
38 Miles. Coffee shop convos.
Jerry invited us to stay a second night. We would have jumped at this offer had he not been on the wrong side of Phoenix for us to easily explore the city on our day off we had planned for tomorrow. Unless of course we cycled into Phoenix and cycled back afterwards but that would defeat the main objective: a day off from sitting on a bicycle seat. Secondary objective: a day off for the legs.
Today we just needed to continue along the Southern Tier cycle route through the city suburbs to our waiting Airbnb. The majority of our ride was on cycle paths following canals which was a real throw back to our first tandem adventures, along the British canal network from the Midlands to London. Only this time the paths were wide, flat and we didn’t need to hack our way through undergrowth. Better still, L managed to not fall in, unlike last time (check out the early blogs #2 #3).
When a stop off at a public toilets on the cycle route resulted in neither of us being able to use the facilities, due to their strange ‘open plan’ opposed to cubicle layout (really weird) we headed to a cafe for coffee, cake and normal ‘restrooms’.
The Flying Fox was attracting interest on a daily basis and today was no exception, we spend 40 minutes chatting to a friendly three, sat on the table behind us at the coffee shop.


Expecting our Airbnb to be a private room in our host’s house, we were a little surprised to find a combination lock on the front door. The house was owner absent and used solely for multiple Airbnb rentals, as well as some kind of eating disorder retreat! Our room was fine, big enough to wheel the bike in and the swimming pool slide out the back beaconed. 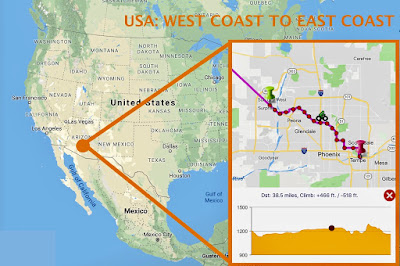 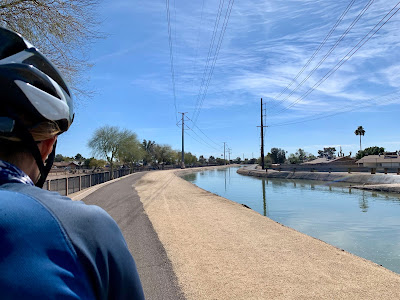 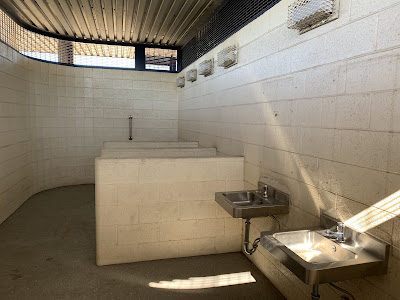 4/Mar. Day 12. Phoenix. A day off from the pedals.
0 Miles. Cactus Extravaganza.
This was our first rest day. Our plans of 5 days on and 2 days off had flown out the window after day 3 when we realised that we were consistently underachieving our 50 miles a day target. It turns out that starting a 3500 mile trip by cycling up through a 4000ft mountain range, isn’t ideal ‘on the go’ cycle training. If we’d been doing the Southern Tier route in reverse, East coast to West, we’d have had a blissfully flat 1200 miles before even encountering our first hill. Anyway…
With a love of cactus and succulents, the Desert Botanical Gardens seemed a good place to start our adventures in Phoenix. 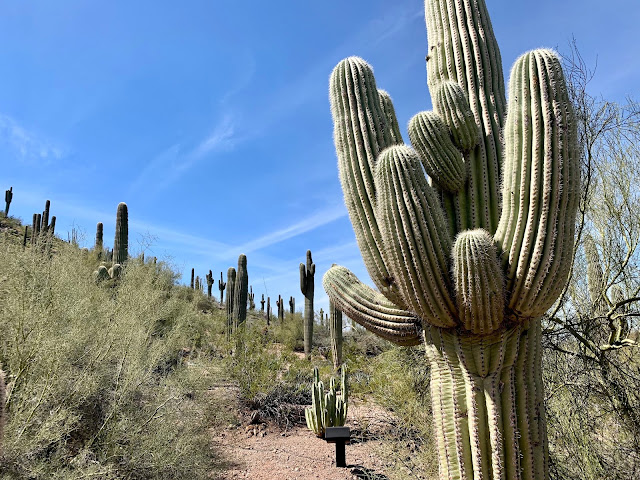 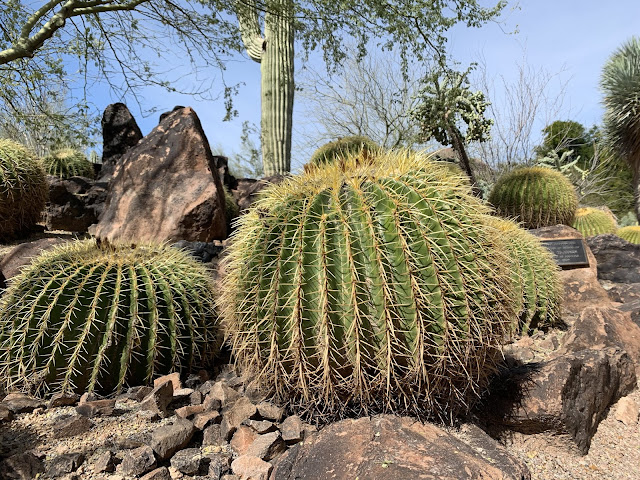 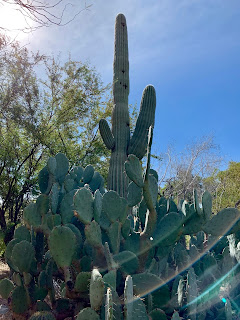 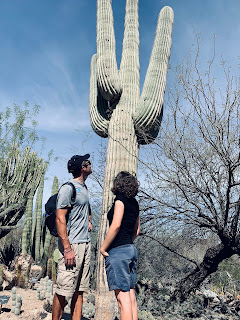 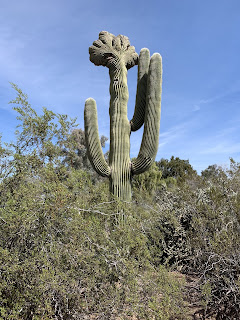 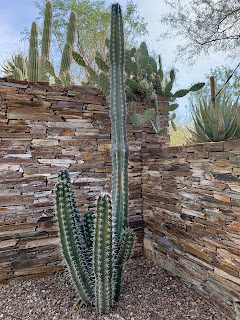 5/Mar. Day 13. Scottsdale Phoenix - Wild camping in Tonoto National Park.
41 Miles. Wild camping in desert mountains.
All the low hanging oranges from the tree lined boulevards on our sedate ride out of Phoenix had already been picked. Not wanting to pass up the opportunity to acquire a weeks worth of Vitamin C, L and I had several energetic jumping bursts to retrieve some fruit. Although successful, we soon realised that the exercise had been very counter productive for the health of our knees and this was the last thing we needed for what lay ahead!

The route: two sides of a triangle to get to point ‘b’ which in this case was 3 days away and  a town called Globe. Why not take the shorter and less mountainous ‘single side of the triangle’ to get to point ‘b’? Answer: because the route says to go the other way. So we did. The scenery was amazing, mountain views with thousands of huge cactus (like in the films) for as far as we could see, but the terrain was brutal and we called it a day just before the next big hill. Tonight we would be wild camping in Tonto National Forest nestled amongst the prickly fellas. 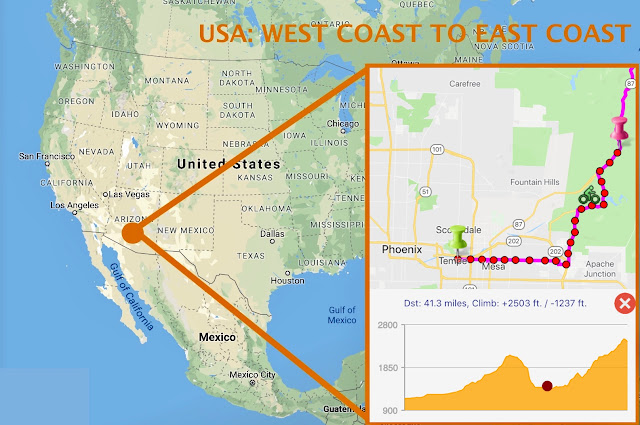 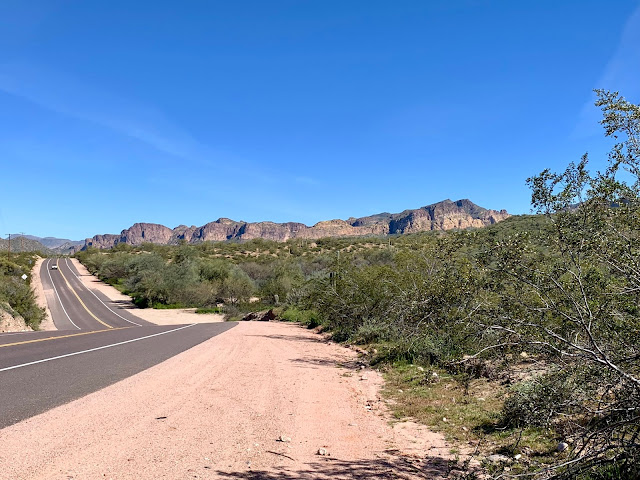 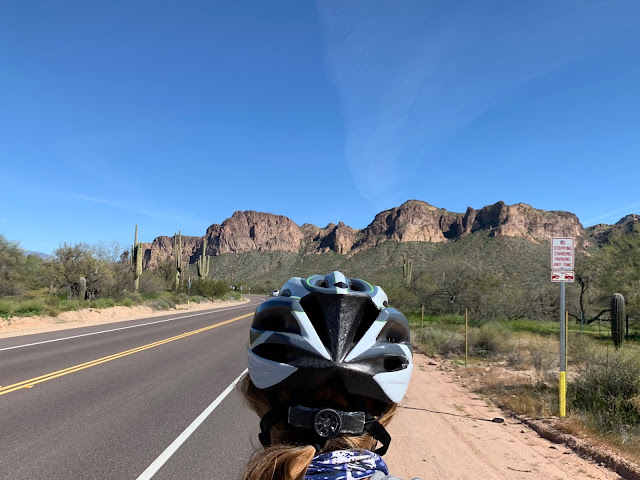 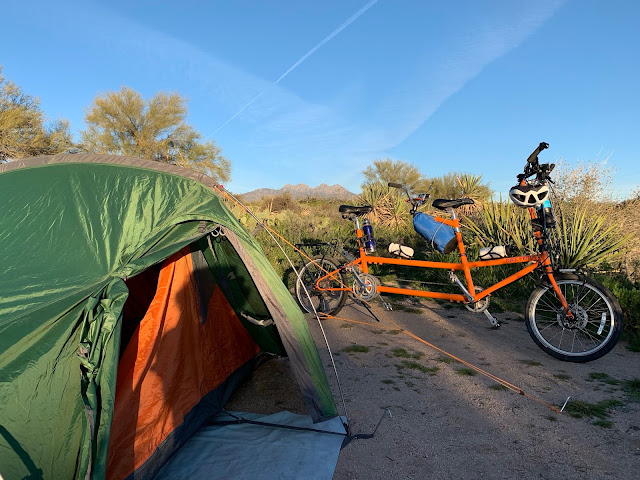 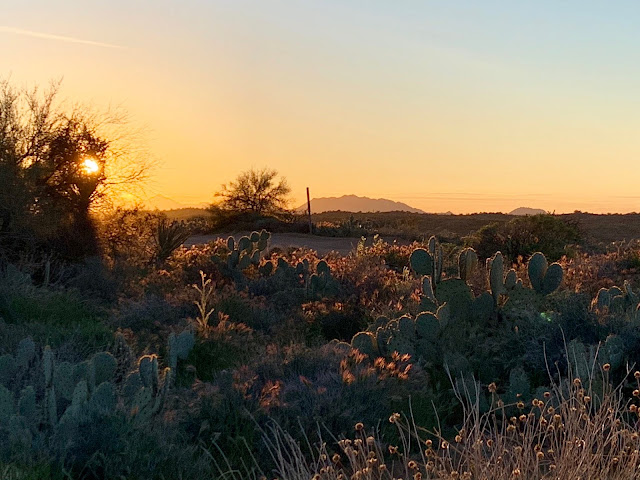 6/Mar. Day 14. Wild camping in Tonto National Forest - Tonto Basin.
47 Miles. Uphill climb: 6696ft. How to push a tandem.
Our ‘two sides of the triangle’ route continued. I attributed our struggle up hills to the swimming pool volume of water L insisted that we carry. We had four water bottles and a 5L water bladder. I was looking forward to having less weight in water to push up Mount Ord on our second day out of Phoenix but by the time I’d emerged from our tent following our night of wild camping, L had already preyed on a couple in a Winnebago asking them to refill all of our water vessels. Our uphill struggle through the mountains resulted in us walking a chunk of the way. It was hot and steep but at least we had…plenty of water. (Actually this was quite useful, L would argue it was lifesaving, we did drink a lot). Jake's Corner which consisted of an RV park, a saloon and a petrol station come convince store who made fresh pizza, marked the end of the uphill. It was downhill into Tonto Basin and we celebrated with pizza and chocolate bars. 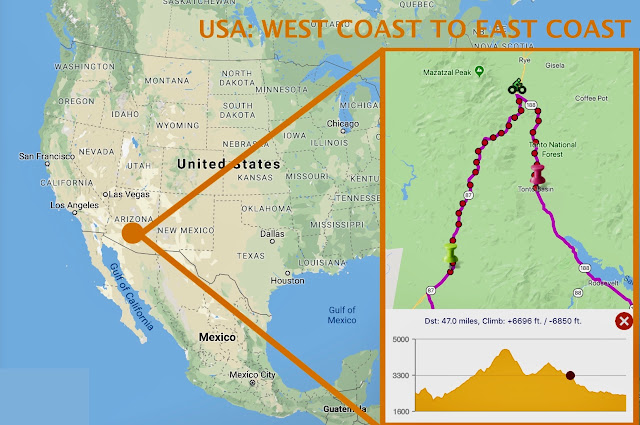 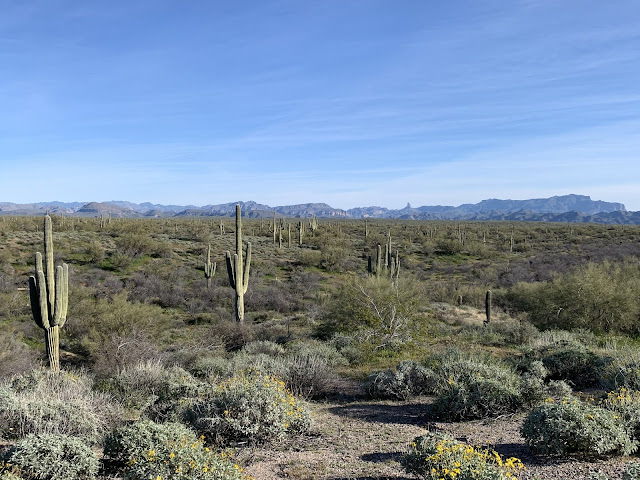 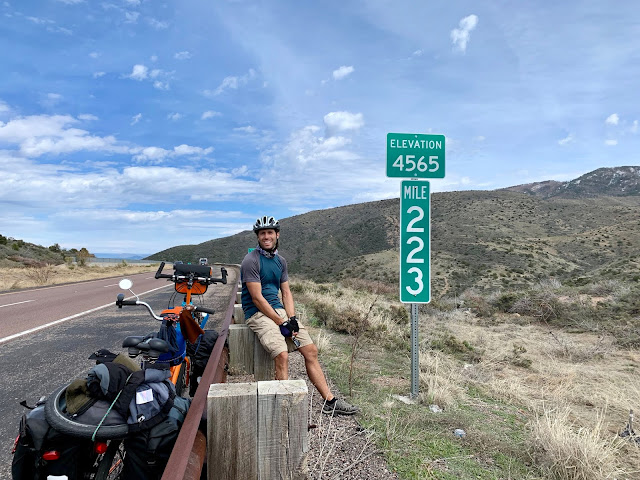 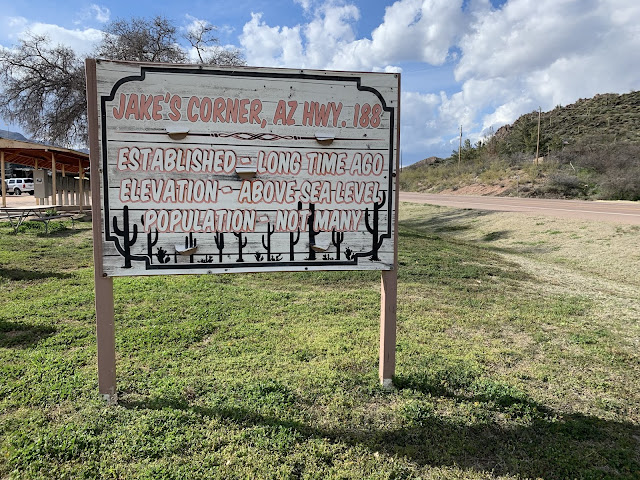 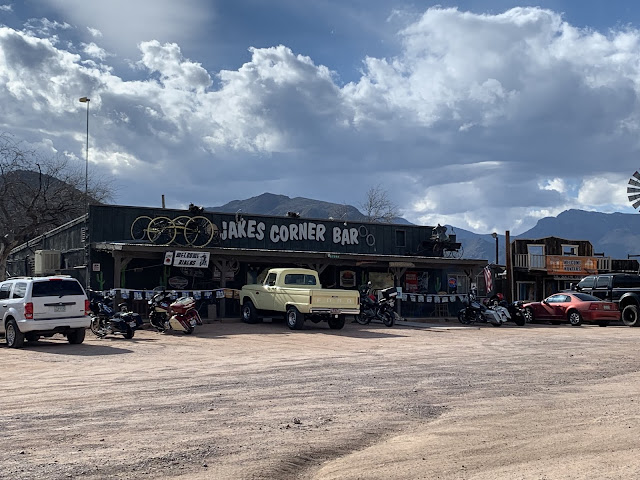 7/Mar. Day 15. Tonto Basin - Globe.
50 Miles. The end of the triangle.
An early breakfast including several refills of coffee and a breakfast pudding, at the only Diner in Tonto Basin, set us up well for the day. Weather: chilly in the morning, sunny in the afternoon. Later in the day, the climb beyond Spring Creek turned into another walk and push situation but a large packet of jerky and 1kg bag of M&M’s trail mix helped us along. Our arrival at Globe marked the end of a tough few days, Mount Ord had been our toughest challenge so far. For now flatter terrain lay ahead but shortly we’d have 8000ft to pedal up… 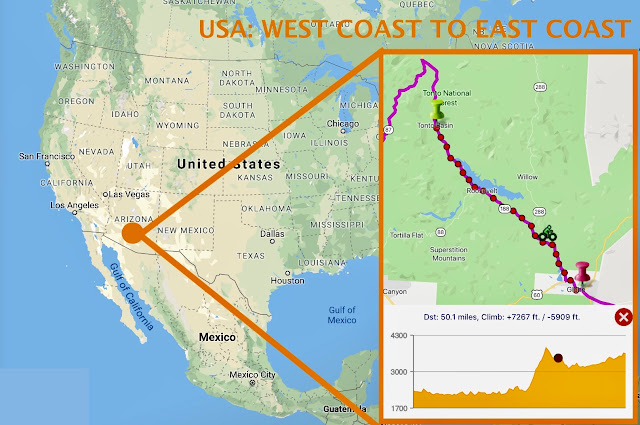 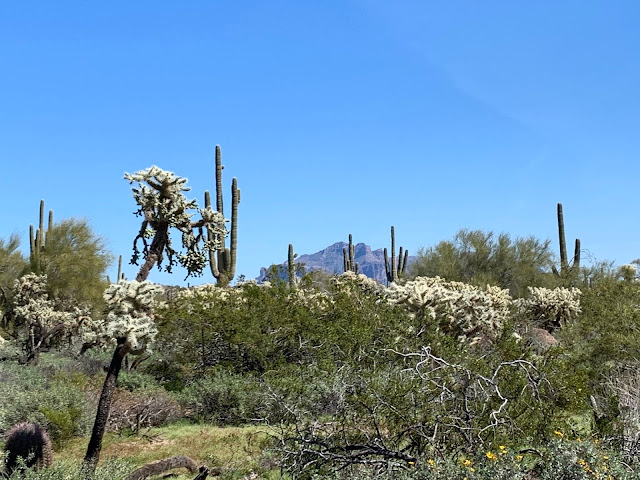 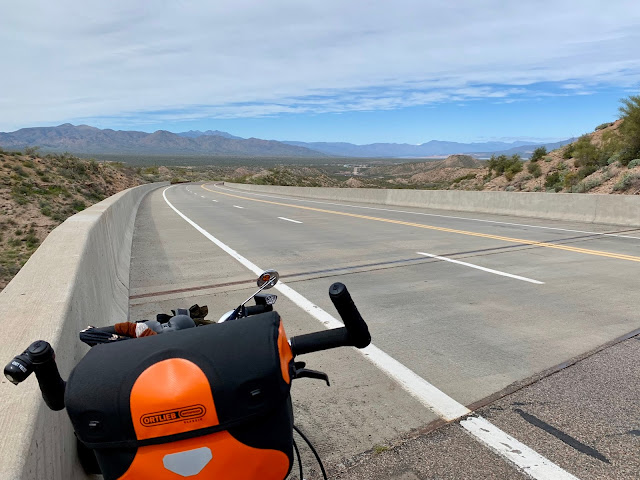 NEXT UP: CROSSING INTO NEW MEXICO...

Anonymous said…
Hi. I was interested in your blog, however, the blog posts available seem to be numbered (limited) and non sequential rendering it impossible to follow your story. Either my browser isn’t behaving, or you might want to think about a different host for your blog, preferably one with sufficient intelligence to allow a reader access to different posts.. I wasted more than 30 minutes trying to guess a keyword for your first post and got as close as post #2.

You broke a spoke? How did that happen? Try to get DT spokes. They are stronger than others, or were back in the day, at least. Be advised that they have a different sizing scheme, so you need to have someone reference the right spoke for you based on hub flange, rim, and cross pattern.

FOX ON A LEAD said…
Hey yup your right, google's blogger isn't a good blog host and at times can be frustrating for us too. We hope to change but until then, I've added the drop down menu of blogs by month, to the bottom of each post incase it's your browser that couldn't find this in the side menu. Hope this works :-)
21 March 2019 at 16:00