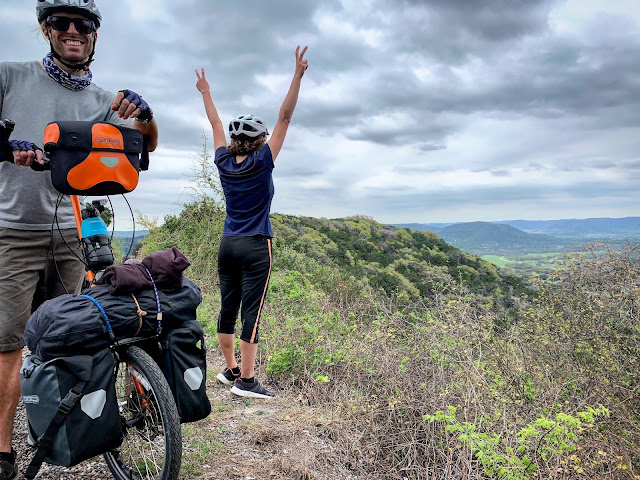 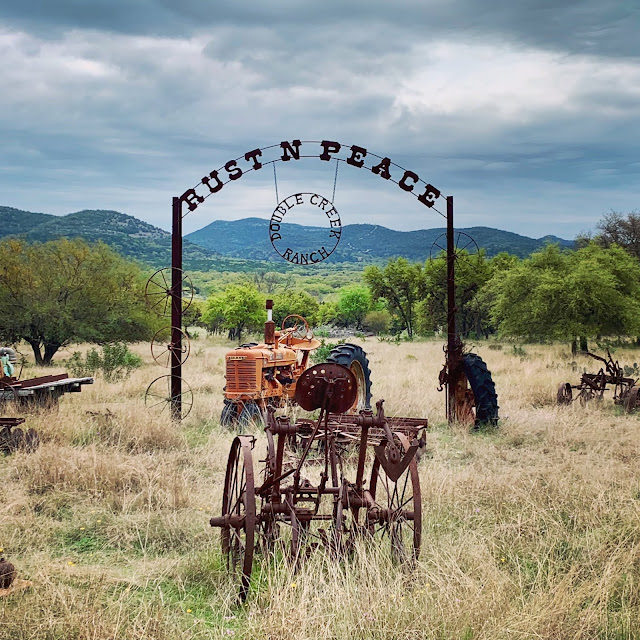 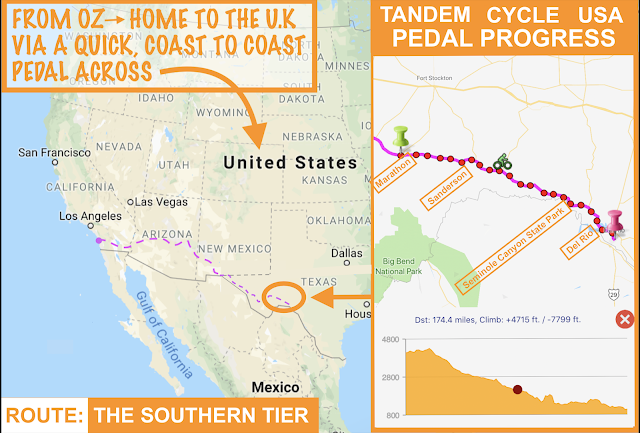 22/Mar. Day 30. Marathon - Sanderson TX
53 Miles. Taken in by the Church.
Stranger things have happened during our planetary explorations since we quit our jobs and sold our house back in August 2017 but a chance encounter with the Pastor of a church in the tiny town of Sanderson, ranked pretty highly on the coincidence scale.
We’d been positioning The Flying Fox in front of a huge, brightly coloured dinosaur when a truck pulled over. The driver didn’t find anything abnormal about the scene infront of him, two brits on a bright orange, small wheel tandem, loaded up with bags and posing infront of a dinosaur, instead he just wanted to offer us a place to stay at his church. We followed Pastor Ellis over to the church and pushed our little life on wheels into a room in the church community centre next door. Miss Kelly, the Pastor's wife, later returned home to find a naked Yorkshireman in her bathroom. L had just stepped out of the shower and had evidently failed to properly lock the door! I was besides myself with laughter when he  returned from their house and recounted what had just happened. L seemed more embarrassed than Miss Kelly, who's bold and bubbly character must have brushed off their  unusual first encounter.  She kindly washed our clothes and brought us over a dozen eggs from her hens.

The only eatery in Sanderson is a small cafe on the edge of town and there wasn’t a  waitress serving who didn’t pack a hand gun on her hip! The pork chops were particularly good. We headed back to church after not daring to leave anything other than a generous tip on the table. 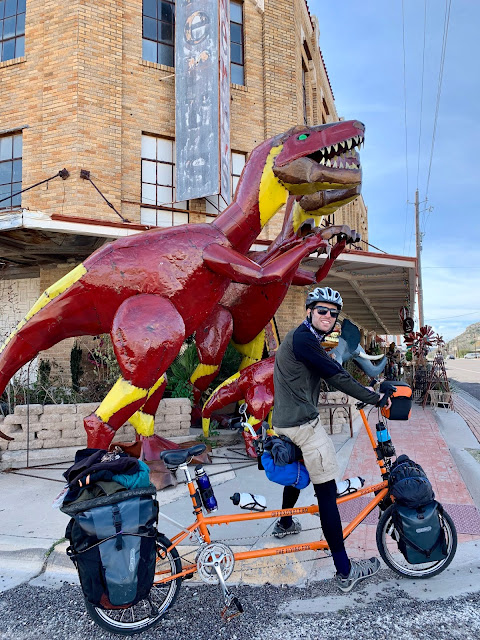 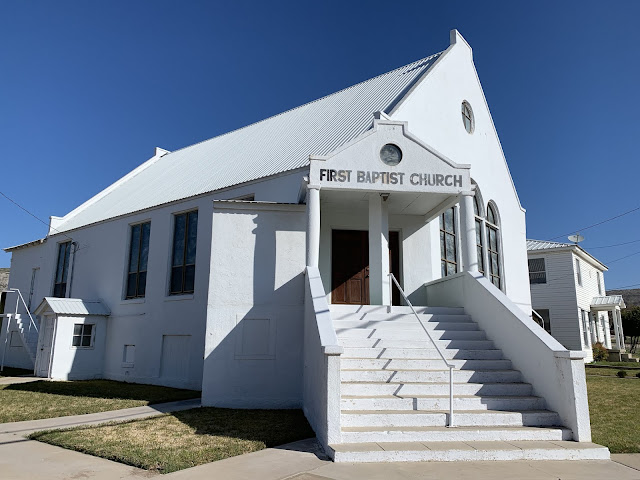 23/Mar. Day 31. Sanderson - Seminole Canyon State Park TX
82 Miles. Two tandems in Texas.
After eating six of our dozen eggs and receiving a kilo of bananas, two large bibles and partaking in a prayer circle lead by Miss Kelly for just the four of us, L and I pedalled out. It didn’t matter that neither of us follow a religion, we appreciated the sentiment and we weren’t going to object to any safe travel wishes no matter how they came. Our panniers were bulging at the seams and our rear wheel probably wasn’t appreciating the extra weight of our gifts but today we’d go on to set a record for our biggest day. 82 Miles.

We were discussing how we’d met some pretty amazing and interesting people lately, both of the cycling and non cycling variety, when emerging from the Texan heat haze appeared two guys on a tandem! We all stopped on our opposite sides of the road. There in the middle of ‘Texas nowhere’ stood four Brits, three from Yorkshire and one from Wales, chatting away in the baking heat. We soon learnt that this duo were attempting to set a new world record for tandem riding around the world, what a find! (www.worldtandem.com).

The Brits kept coming: An hour or so up the road, L and I had stopped for lunch at a road side picnic rest area, when who should roll up but two ex BBC producers on fully loaded bicycles! They joined us for lunch. We later heard that all four went on to stay the night in Sanderson after being taken in by Bubba’s Pampered Pedalers who’d booked the school hall which was opposite Pastor Ellis and Miss Kelly’s place. 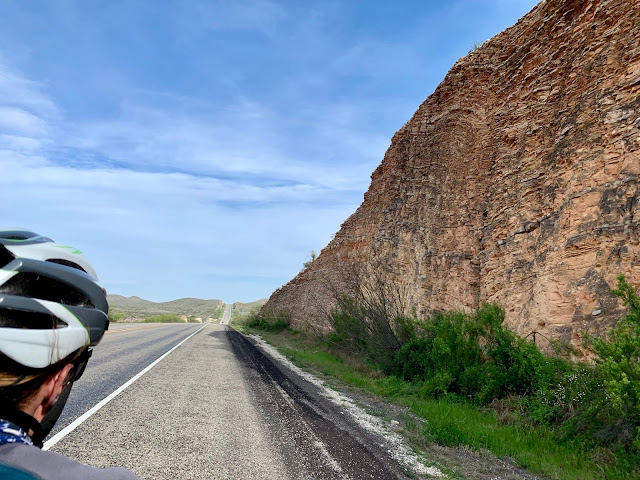 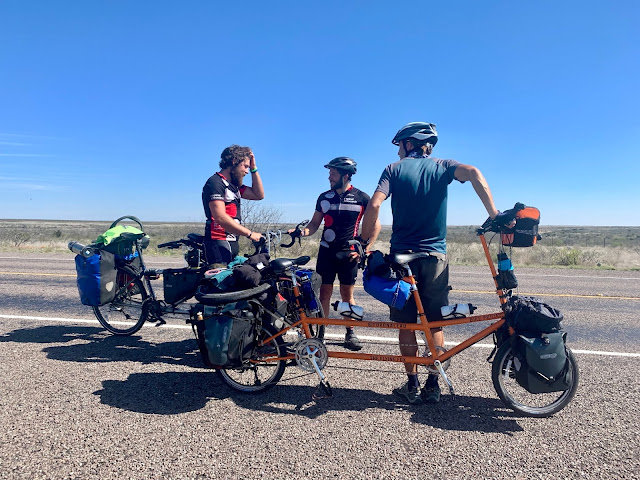 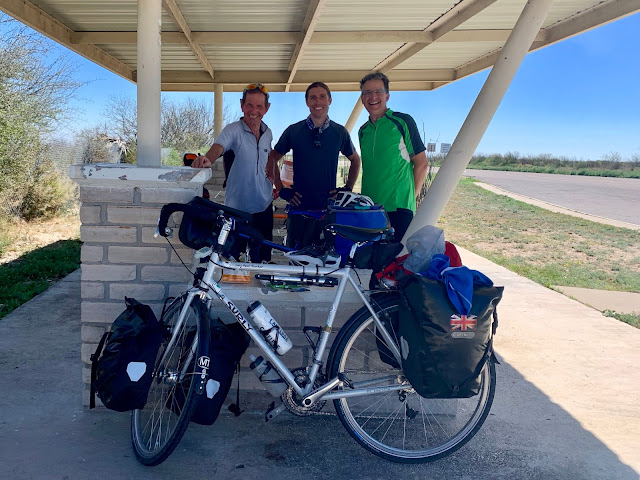 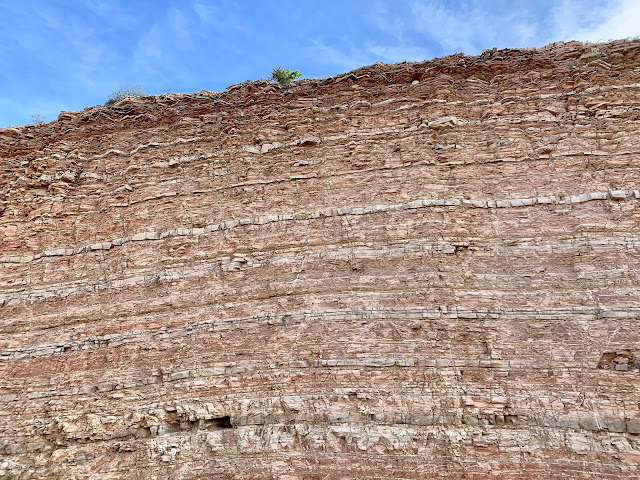 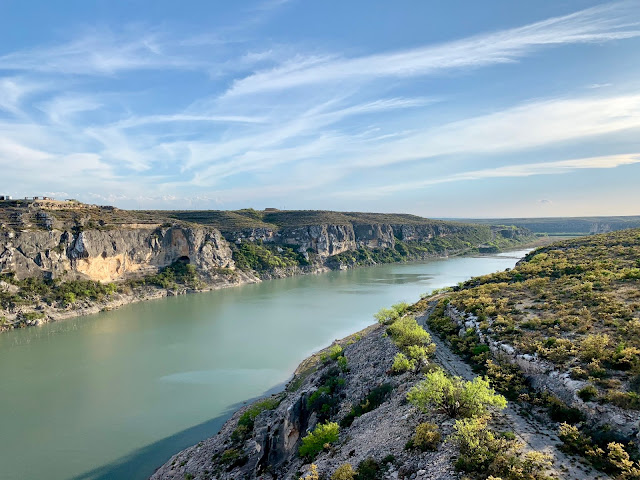 24/Mar. Day 32. Seminole Canyon State Park - Del Rio Outskirts
30 Miles.  “Yeh (long reminiscing pause) I rode a plane once!”...
Perhaps yesterday’s burst of energy allowing us to continue over the rolling hills for as long as we did, was fuelled by the quick sugar stop we made at a tiny fuel station, on the outskirts of the even tinier settlement of Langtry. L returned having spent $14 on a couple of chocolate bars, a tin of tuna, a can of fizzy pop and not much else... but a cracking conversation with the woman behind the counter, in part made up for the expensive refuel. Misty was interested to hear about how we got to be in her tiny Texas town. We signed her guestbook. “So did y’all fly here with your bags!?” This reminded me of a previous conversation with a woman in California. She’d asked the exact same question and went on to say how L reminded her of Hugh Jackman but the changed the likeness to Hugh Grant. There was no mention of Hugh Grant this time round, instead in a thick southern accent Misty added “Yeh (long reminiscing pause) I rode a plane once!” Terminology can be a funny thing. Others had said that at some point we’d meet people that had never travelled further than the state of Texas, but it turns out that Misty was not one of those people, after all, she’d rode a plane once.
Our morning in Seminole Canyon State Park started with a tour along the river canyon to see America’s oldest rock paintings. We cycled that morning listening to music and audiobooks whist my makeshift washing line whip dried a few items of clothing. Destination: A campground on the outskirts of Del Rio. 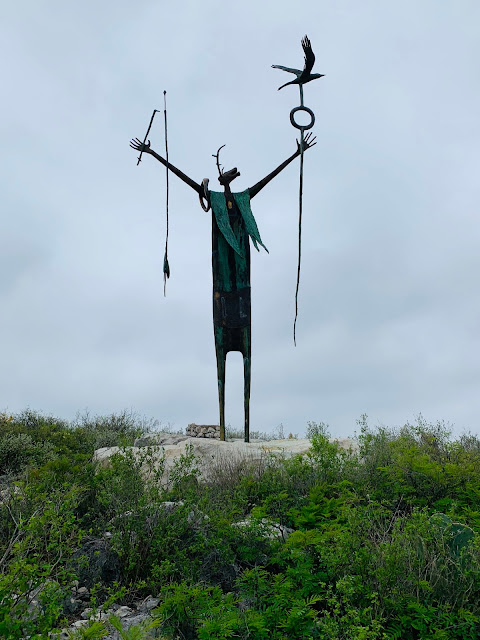 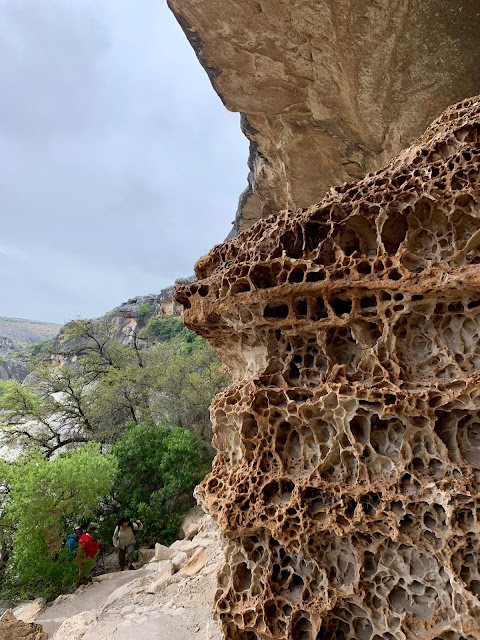 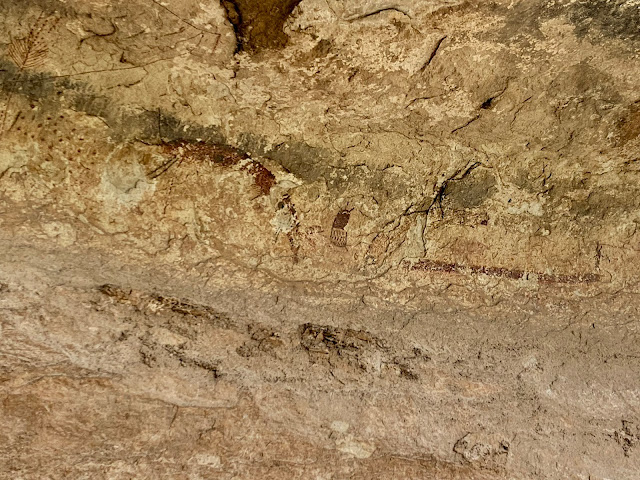 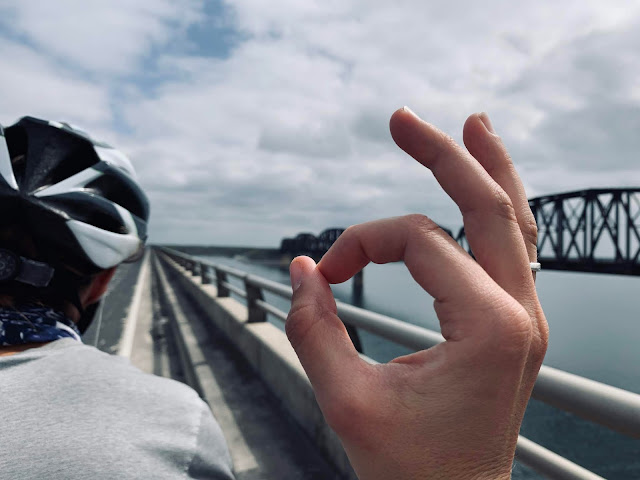 25/Mar. Day 33. Del Rio outskirts - Brakettville TX
41 Miles. Here come Bubba’s.
Bill lived in the trailer parked opposite our tent space. We knew this because our gas ran out mid breakfast cook and so we’d ask Bill if he wouldn't mind to finish scrambling our church eggs. We had planned to spend most of the day in Del Rio before cycling onto Brakettville to camp, but we didn’t find much that took our interest in Del Rio so we carried on cycling.
Cue the return of a whole host of familiar friendly faces, in hi viz and pedalling in the same direction. We’d been Bubba'd. Bubba’s Pampered Pedalers had caught up with us and we found ourselves scooped up for another hospitable evening only this time our introduction to the group went something like, “You know when you have a bad penny that just keeps coming back... everybody lets welcome back L and N...” 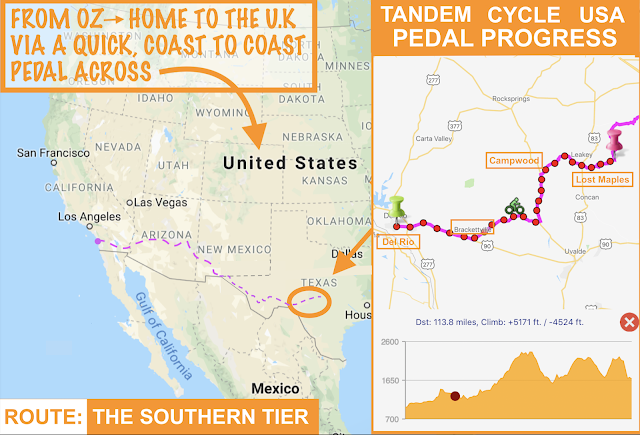 26/Mar. Day 34. Brakettville - Campwood TX
48 Miles. Sub topic: The quality of air.
Punctures #5 & #6 came within the space of a mile but didn’t set us back too much (think F1 pit stop efficiency) the weather was warm and we were beginning to roll through a part of Texas known as Hill Country.
We would remember these particular roads through Texas (and in fact right the way through to Austin) for very high property fences, elaborate entrance gates and a constant smell of death! There was a lot of roadkill, a lot of vultures and a lot of times when I found myself coughing after accidentally inhaling through my mouth and tasting the smell of a decaying animal. The air quality at the back of the tandem was also further polluted by L, who lately had been having his own serious wind problems. Oh the joys of a stoker. 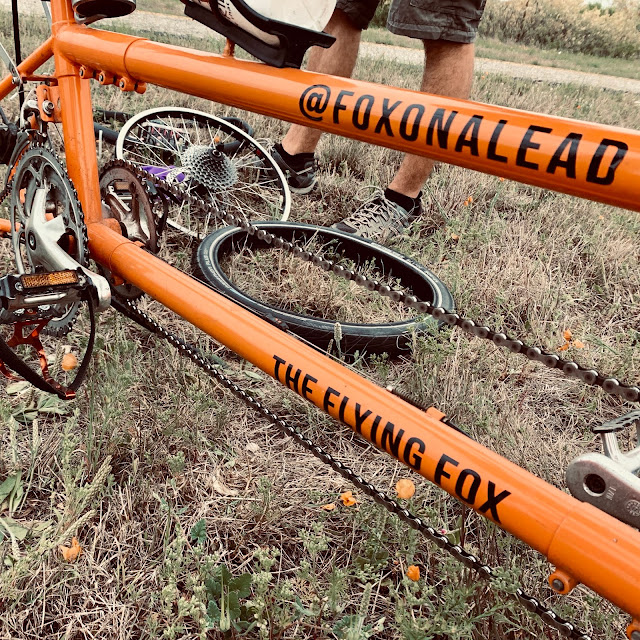 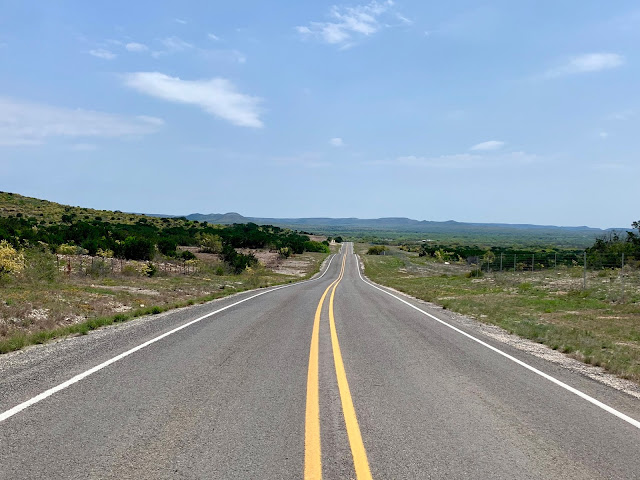 27/Mar. Day 35. Campwood - Lost Maples TX
36 Miles. Two killer hills and a deal at the fuel station.
The hills had been gentle and rolling. We mostly gained enough speed on the downers to make it up the next hill and so the pattern continued...that was, until we reached two killer uppers. A long, drawn out, winding road with almost no shoulder guided us up over the  two hills ahead. We stopped a handful of times to catch our breath but surprisingly neither of us felt the need to disembark and push. Either we were getting better at this tandem cycling thing or the hills weren’t as steep as the monsters we’d conquered over on the West. I think we knew the answer… and it wasn’t that we were getting any better!
Lost Maples RV park was simply a grassy site behind a fuel station. There were no showers, only a toilet, but we couldn’t complain because our tent site only cost $10 and meant we could put off the third and final big hill until tomorrow morning. Whist paying for our camping, L cut a deal splitting a 6 pack of beer with a guy who’d come into the shop wanting to buy a couple of single bottles. I imagine this was the first time either of them had co-purchased something, with a stranger, at a fuel station.
Lost Maples is an area where Maple trees grow, perhaps lost from Canada, who knows? So when we were told “You can pitch your tent over by the big Maple tree" this wasn’t very helpful! Failing to distinguish ‘the big Maple tree’ from a handful of big Maple trees, we put the tent in a spot we thought felt right. Feng Shui had been of surprising importance in Australia when we lived in our van and positioning to get the right angle and view for wild camping would take up at least 20 minutes every evening. This evening the Feng Shui wasn’t right. Naturally we only realised this after unloading the bike and putting up the tent, but we weren’t in a rush so we moved. 100 meters was all it took. 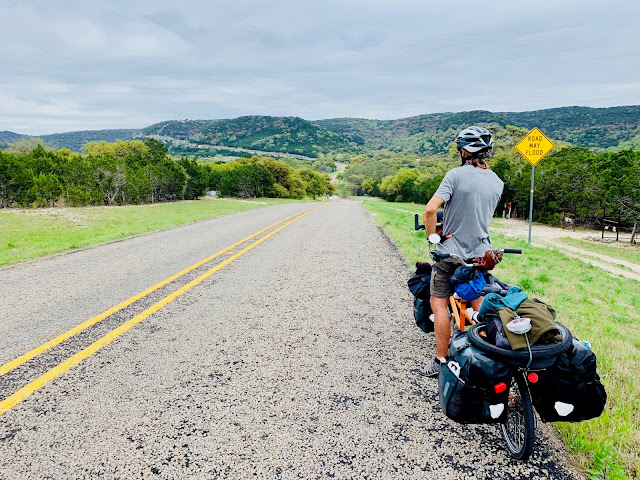 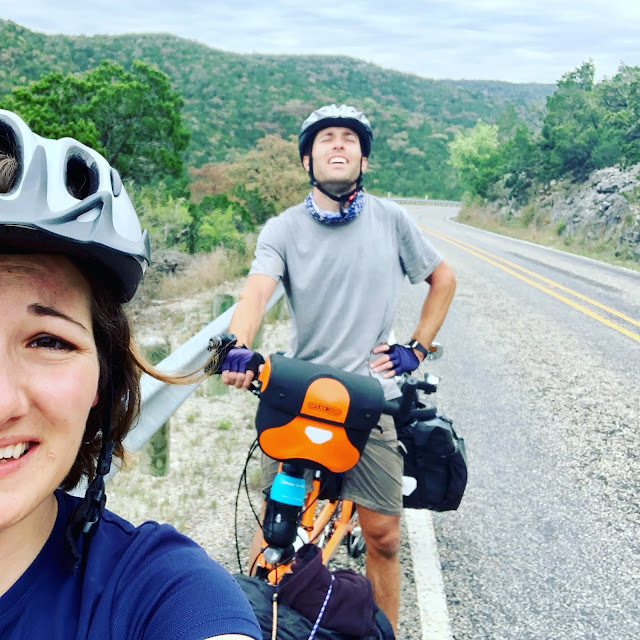 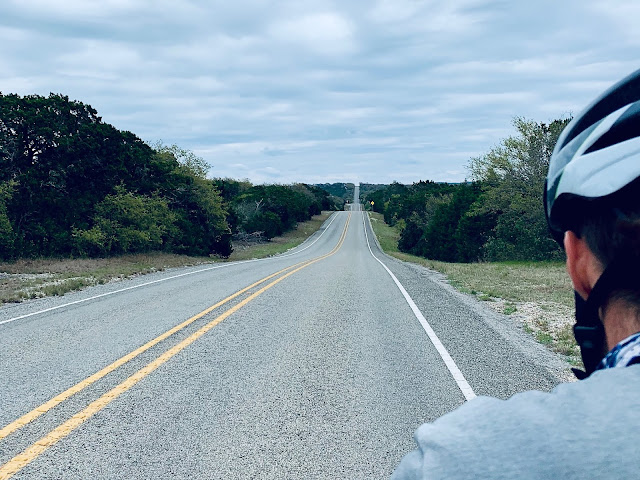 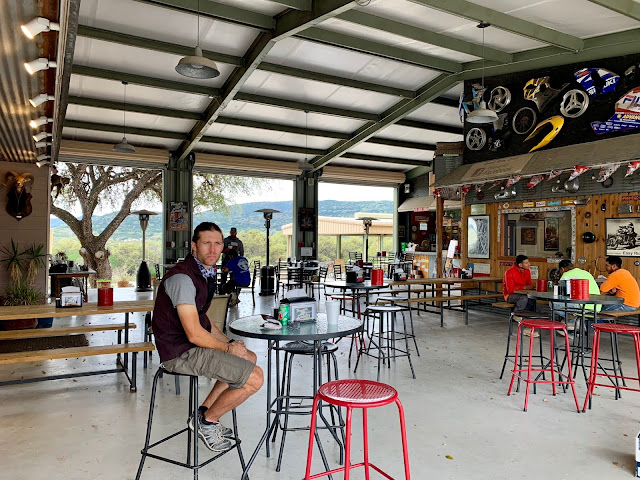 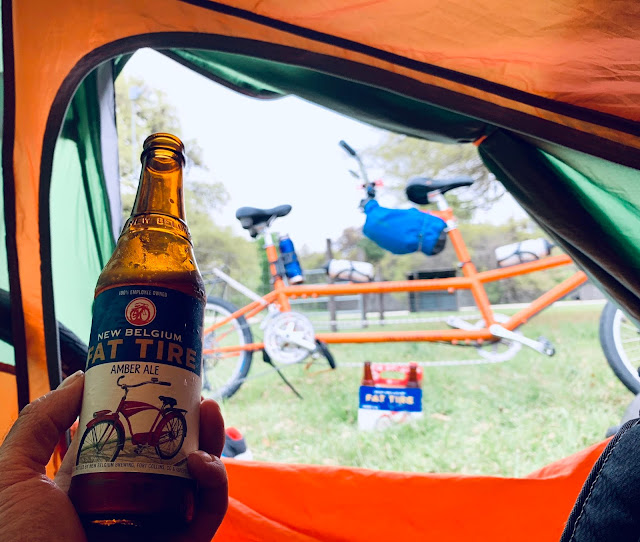 NEXT UP: The heart of Texas Hill Country, unbelievable southern hospitality and the big lights of Austin.

******************
A little extra note: We are raising money for two great charities as we cycle home to the UK from Australia, across the landmass in the middle... AMERICA. If you'd like to sponsor us, that would be amazing, here is the link to our just giving page where you can also find out more about the charities: CALM and Alzheimer's Society. Thank you to all who have donated, it keeps us pedalling!
https://www.justgiving.com/companyteams/foxonalead
86. Texas Brakettville Bubbas Pampered Pedalers Campwood Church Days 30-35 Del Rio Hill Country Lost Maples Marathon puncture Rock art Sanderson Seminole Canyon Tandem Texas Hill country World Tandem
Reactions: