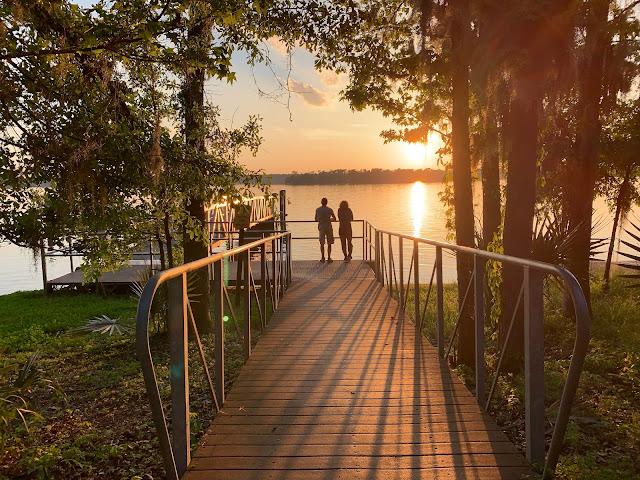 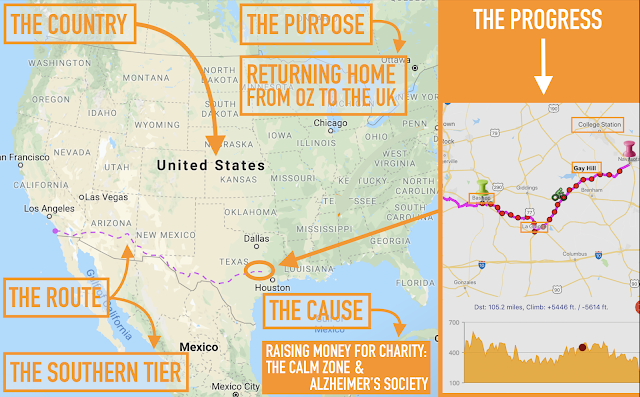 4-7/Apr. Days 43- 46. Bastrop - La Grange - Gay Hill- College Station.
77 Miles. The emergency pick up.
Bad weather had caught up with us. We'd barely set off from what had turned out to be a ridiculously over priced campsite with a bath house that you wouldn’t shower your dog in, (Lake Somerville Marina, for those wanting to avoid) when a biblical thunder and lightning storm started thrashing out overhead. A monsoon downpour began so we pedalled with the same dog escaping vigour, in other words like two crazies on a tandem, into a conveniently placed fuel station for shelter. There we waited. The vibrations from the thunder claps travelled from the ground up through our sodden feet and soon the daylight had completely vanished (solar eclipse style). We decided to use a lifeline. There was no ‘ask the audience’ so we decided to ‘phone a friend’. Actually we were phoning Kathy, a complete stranger who we’d met on the road a handful of days ago. Our paths had crossed during our double puncture episode, before our water crossing beyond Johnson City. Kathy was out training for cycling the Texas Hill County loop and we were just the usual, strange sight to behold, intriguing to cyclists and non cyclists alike. Kathy and Cathy, from now on referred to as KC-athy would become our WarmShowers No.11 after driving 40 minutes from their home in College Station to rescue us. 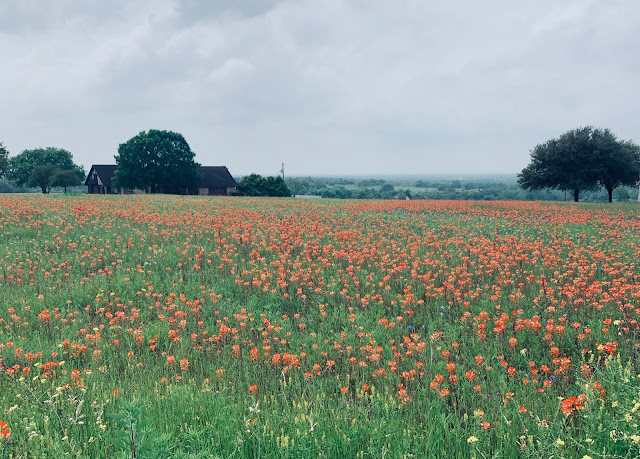 Our wait at the fuel station for the KC-athy rescue, gave L and I time to reminisce. In truth, days 43 & 44 had not been very eventful. We’d passed by what surely must be the World’s largest antiques fair, with a changing landscape of olde-worlde wonders sprawled across the fields either side of our winding road for about a five miles. The downside: Our sedate ACA country road now felt like a city commute during rush hour.

KC-athy and their two super ancient cats (drawn like magnets to L, as appeared to be the case with all animals he’s allergic to) hosted us for 2 nights in their recently remodelled, super swanky home. Days 45 & 46 were a blast, balanced with some much needed downtime catching up in the life admin department. We ate lunch out, got to know their bike minded neighbour at dinner and became fully qualified in American basketball, having watched an electrifying final on tv. Note: For two non 'sportsy' spectators this is quite a bold statement, we both surprised ourselves with how much we enjoyed watching the game!
After a weekend waiting out the torrential rain at WarmShower No.11, we loaded up into the support vehicle and were generously whizzed 40 minutes back west so we could pick up the Southern Tier route from where we left off. 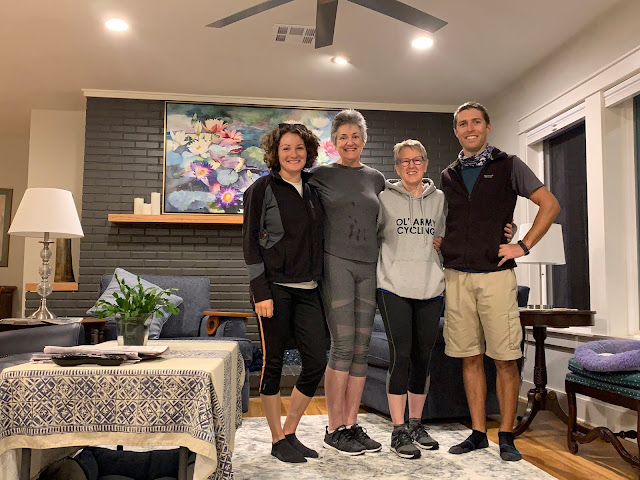 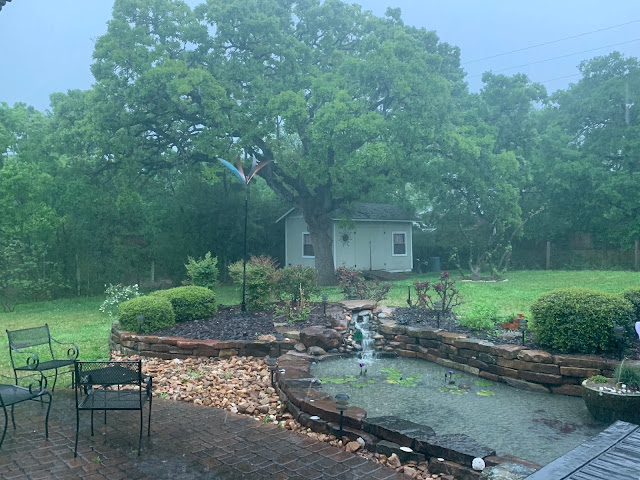 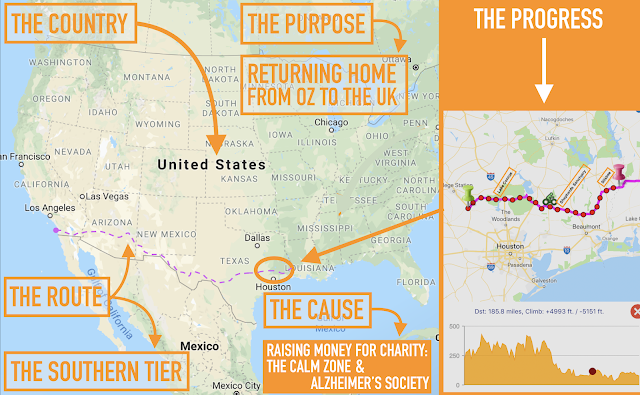 8/Apr. Day 47. Gay Hill - Lake Conroe
64 Miles. A tale of two terrapins.
It made a very loud bang, like when you pop a bag of air. We were coasting down hill the moment it happened, both of us flinched and The Flying Fox gave an unappreciated wobble. An exploded terrapin lay in the road, the oncoming truck having just completely annihilated the poor thing. We stopped a couple of hundred meters down the road. For L this was an 8 second chance to rest his bot, for me it was a brief moment to get over the terrapin trauma. KC-athy had told us about a book they’d read: A bicycle touring father in a bid to increase progress and not stop for every road kill his young son caught sight of, had concluded that 8 seconds would be the optimum amount of time for his son to mourn each dead animal. We’d just adopted this rule.

Meet Frank, he had been lucky. Prior to the exploded terrapin incident but only around 30 minutes or so, we’d rescued Frank, also a terrapin (I'm assuming but I could be wrong?). He too was about to make a suicidal stroll across the road, so we stopped to give him a lift to the long grass next to a shallow beck where it looked like he was heading. At least that’s where I’d be going if I was him. 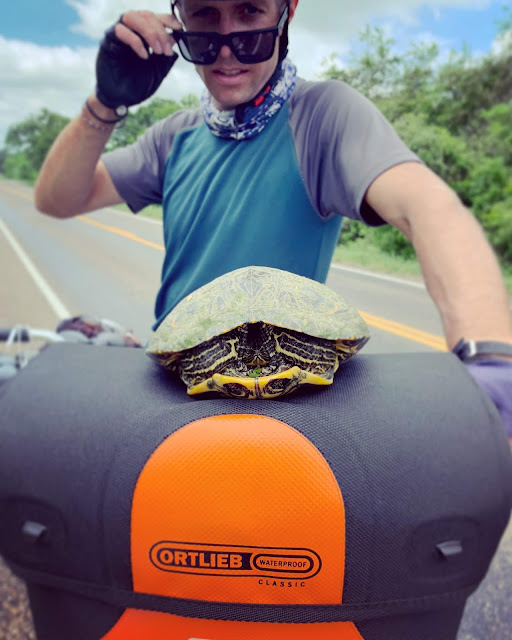 We arrived at our destination with no further terrapin fatalities, only suffering a minor mishap which involved deep invisible mud resulting in myself and the back wheel sailing out to the left at a very unnatural angle. Ahead of us was a sign which read ‘Camping $30 per site.’ This was a problem because the website L had found (which turned out to be non official) stated $16 for tent campers and this is what we’d prepared for. By this I mean, we’d only drawn $20 out at ATM in the closest town of Navasota, 36 miles back. This would be the first time on our trip when not carrying much cash (incase we were unfortunate enough to get mugged) had posed a problem. As luck would have it, campsite host Roy who lived in a large, new looking caravan on a plot near the entrance of the lower camp area, invited us to stay as his guests. He offered the use of his own tent which had just finished drying out after the last few days of rain. It was positively palatial compared to our tiny Vango. We took the West wing, enjoying the novelty of being able to walk and waltz around inside. Roy’s equally friendly camp host colleague who lived over on the other side, buzzed over in her golf buggy to bring two disheveled looking cyclists, fresh towels, cookies and a couple of litres of sweet tea, a southern staple we’d not yet tried. Recipe: Cold tea mixed with an eye popping amount of sugar and served up over ice. Roy was quick to bring us out some ‘Sonic ice’ from his fancy Sonic ice making machine. L and I enjoyed our chilled sugar rush with the backdrop of a setting sun. 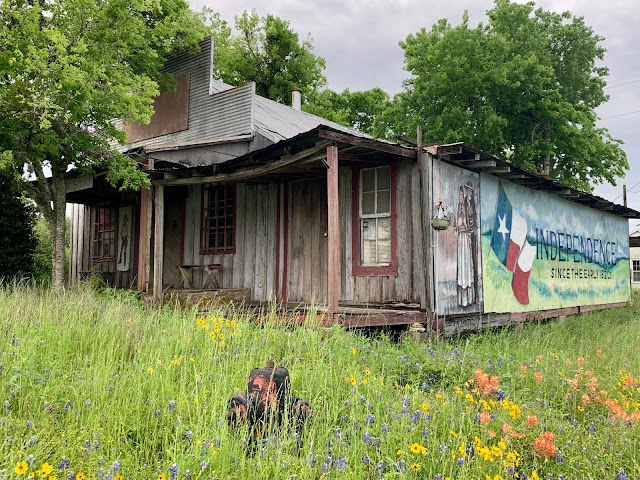 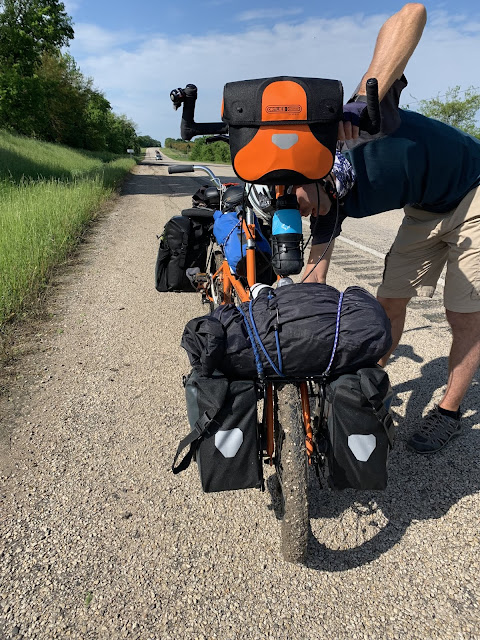 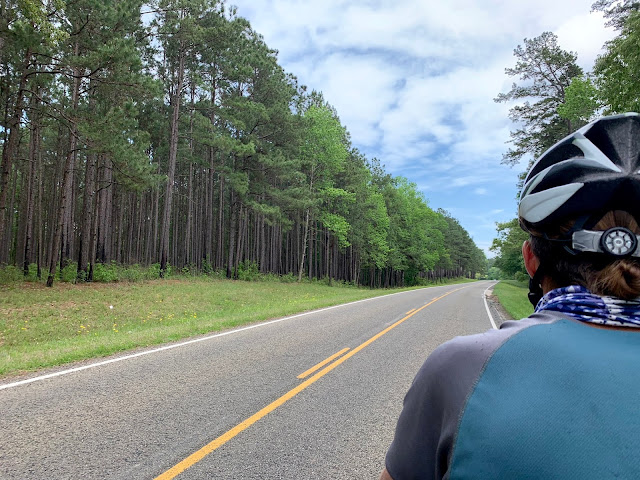 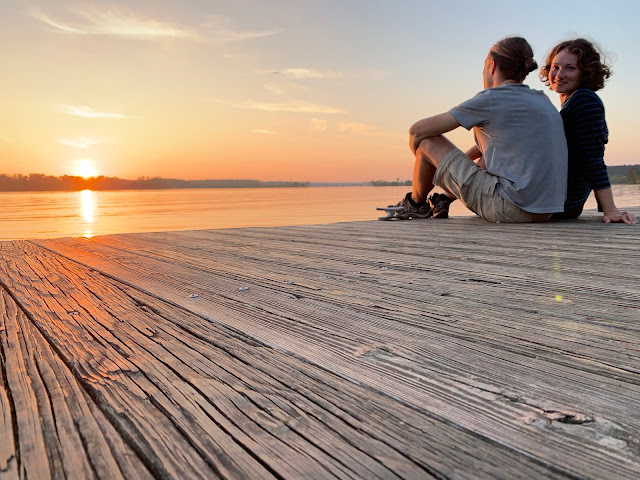 9-10/Apr. Days 48 & 49. Lake Conroe - Shepherds Sanctuary - Silsbee.
104 Miles. What day is it?
The daily specials from Monday through to Sunday were written overhead on a whiteboard. L had confidently placed his order for Thursday’s special (breaded catfish) with the guy behind the counter who was conveying an expression of confusion, or perhaps it was disbelief? L returned to the table red faced having just been tactfully informed that today was not Thursday and that Tuesday’s special was meatloaf and beans.

Shepherds Sanctuary turned out to be a privately owned campsite with some quirky vibes happening. To get there involved cycling a few miles off route and before we arrived we added another puncture to the mounting tally.


The following day we packed up a wet tent. The absence of guttering is an oversight in America and therefore an even bigger oversight is to pitch a tent too close to a building’s over hanging roof. After plastering on our horridly thick mineral suncream (a mistake purchase) which for the last three weeks had left us looking oddly grey/white, we back tracked to the route. It wasn’t long before we were being chased by three tiny dogs who stupidly ran along the main road behind us. When they gave up, just stopping in the middle of road, the traffic came to a standstill in both directions. We laughed and pedalled off into the distance on a temporally empty road. 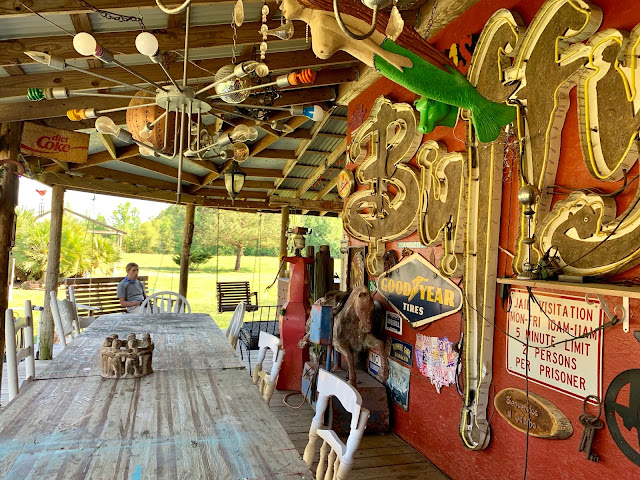 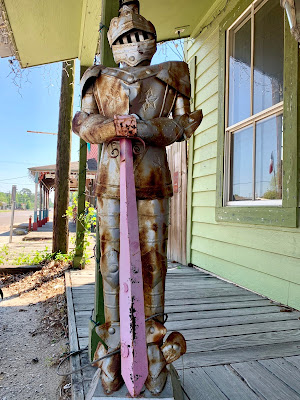 11/Apr. Day 50. Silsbee - Louisiana
52 Miles. The gift of a half eaten sausage on a stick.
Texas had a couple of gems to throw at us before we crossed the state line into Louisiana. Yesterday we’d broken rear spoke No. 4. Today a half eaten sausage on a stick had been given to L by an old chap outside a fuel station. He seemed genuinely concerned that we might not be eating enough and thus not make it to the East coast and so after grabbing L’s attention with a “Hey you, come here!”, he handed over his half eaten donation along with a single piece of white bread. Combined, these two items probably contained enough sugar to fuel us all the way to Florida but instead the unappealing sausage on a stick ended up in a bin further down the road. L and I opted to eat at Elijah’s Cafe on the outskirts of Kirbyville. Here and for the first time on the trip, we didn’t feel the need to lock up The Flying Fox whilst we dined inside and out of the line of sight. We figured it would require an ultra dim opportunist to attempt the theft of a fully loaded, unstably heavy tandem, especially when the whole of the Sheriff’s office and the whole of the  Police department were inside on their lunch breaks. Before tucking into our American size lunch, L and I agreed that any dim opportunist who didn’t topple off before leaving the car park and who managed to outrun the 7 cop cars parked outside, would probably deserve the bike anyway. 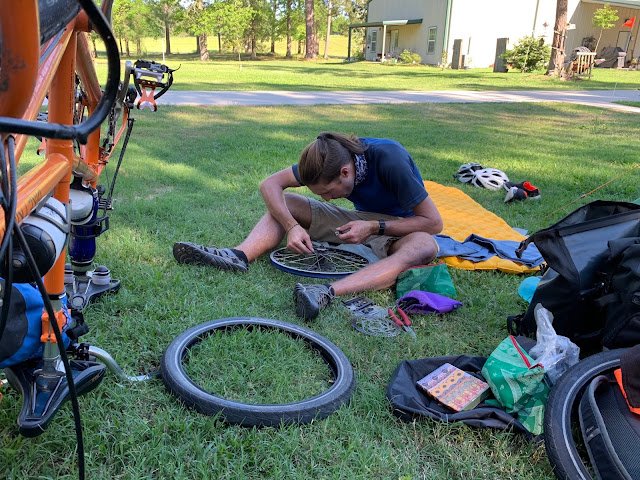 Goodbye TEXAS… NEXT UP: LOUISIANA !!! 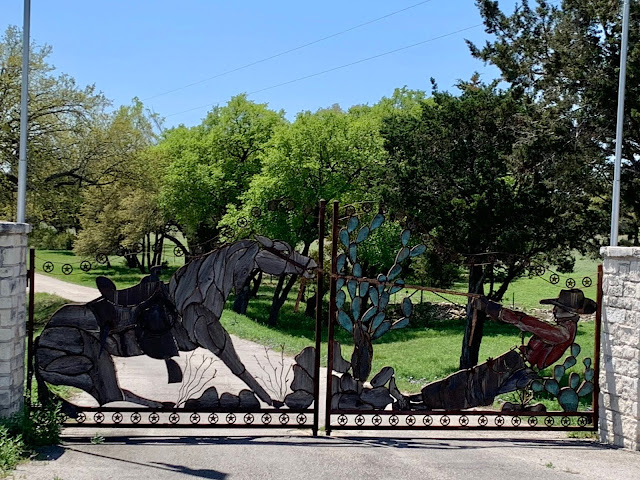 CK-athy said…
Oh, how giddy I was to see your blog update this morning. I sat at the dining table and read it aloud to Cathy who was puttering about. We both remembered what a delight it was to have you both in our home and while reading your blog broke into spontaneous laughter at frequent intervals! We have been having more apocalyptic weather here in central TX, which of course made me think of you two. Sounds like you dodged most of it. I so enjoyed reading and getting caught up with your journey. I had forgotten how darn exciting that basketball game was! The book you referenced is The Bar Mitzvah and the Beast: One Family's Cross-Country Ride of Passage by Bike, authored by Matt Biers-Ariel. It's a delightful read. Well, have, fun, stay safe & keep saving turtles! Warm Regards, Kathy
3 May 2019 at 06:54

FOX ON A LEAD said…
CK-athy I hope you adopted your best British accent when reading!? haha. Hopefully you guys are doing well and riding out the storms. We were going to send a text to say the blog post was out but you beat us to it! Cheers for the book reference :-). We're 1 day away from St Augustine! We've got some catching up on these blog posts to do to bring everyone up to speed! Keep pedalling, N & L
3 May 2019 at 16:45

CK-athy said…
One day from St. Augustine! Brilliant! I have friends there if you need a place to stay. Looks like you'll make you flight home. You could ride the Atlantic Coast Trail North for a few days.... At any rate, we have not been using our best British accents much, but have been craving tea and keep wanting to watch Notting Hill since you have left. Safe travels.
3 May 2019 at 17:13