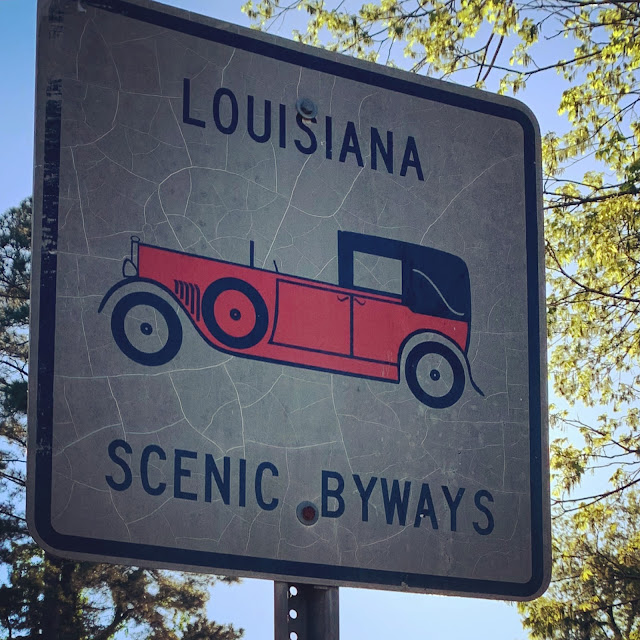 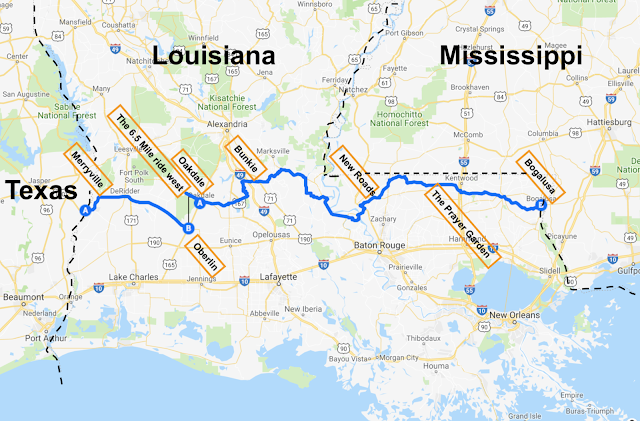 11/Apr. Day 50. Silsbee- Merryville
52 Miles. Night at the Museum
Louisiana had a disappointingly mediocre state sign but still, it marked the beginning of new, yet unknown adventures and also the end of our epic journey through Texas, 30 days to be exact! (Check out the previous 4 blog posts). We grabbed a photo which took a few attempts, setting the timer and running back into position, to get an in focus shot. This was mainly because L had been stood on an ant nest and so began jiggling around  uncontrollably, desperate to remove his socks and shoes. 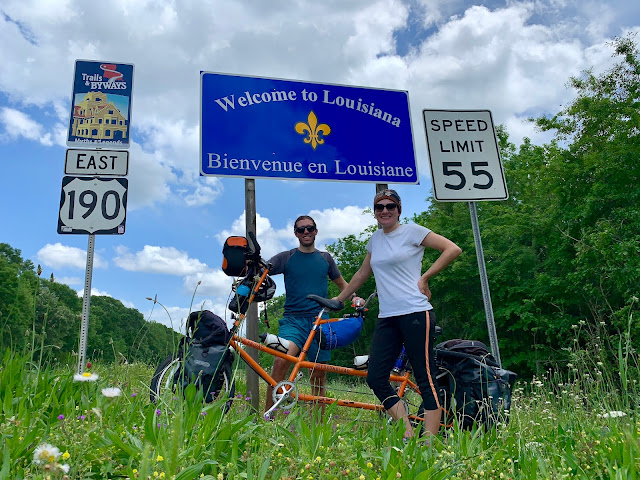 The main differences between the two states would prove to be a subtle change in accent (a stronger twang and more southern slang) and a noticeable increase in dog chases. There was no doubting that our trip so far had thrown some unique places into the accommodation bag for us to experience but Louisiana was about to go all out! We started with pitching our tent under a marquee in the recently waterlogged grounds of the Merryville Historic Museum (our WarmShowers No.12). Unfortunately we'd rolled into town a few weeks too late to enjoy the folk festival, instead we found ourselves entertained for hours by two young brothers and their repertoire of jokes and stories.
Both looked unimpressed with our meal choice of two non-gourmet tins of unappetising vegetable mush and so questioned if that was all we were eating. We didn’t tell them about our ice cream and chocolate bar binge earlier. Ten minutes after disappearing off somewhere on his bicycle, younger brother had slung a meat slab, bread loaf and a large packet of crisps, onto the picnic table. Our food hamper, having (we suspected) just been stollen from his mother’s kitchen, wasn’t something we could accept. Mr Lee and Miss Nikki (as apparently were our new names) therefore sent younger brother pedalling home with food parcel in tow. 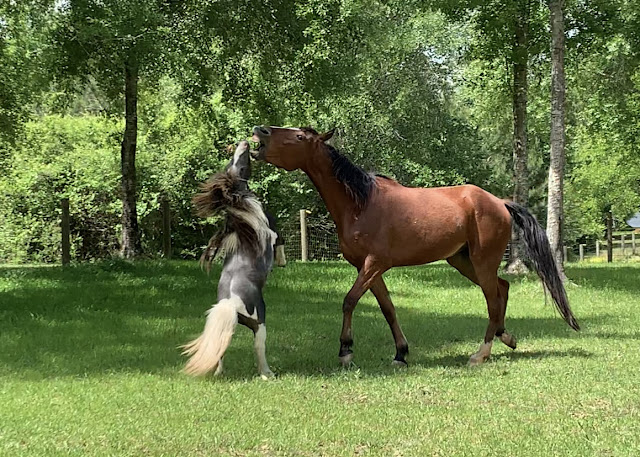 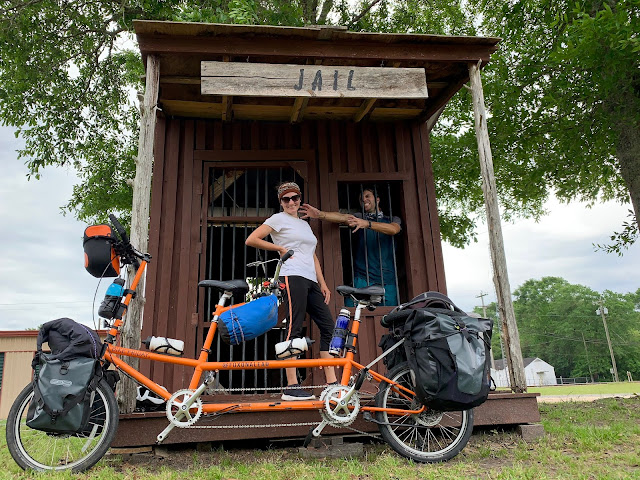 12-13/Apr. Day 51&52.  Merryville- Oberlin- Oakdale
56 Miles. Storms coming…nowhere to stay
L and I had meticulously calculated that if we set off early and ride the good weather from Merryville, we’d reach Oberlin just before a huge storm was due to set in. Our feelings of accomplishment as we stood outside the only accommodation in town, having beaten the storm by 30 minutes, didn’t last long. Dread set in when we discovered that our supposed lodgings (being the only place in town) was closed! We’d arrived at what looked like a forgotten building site. The current situation…Weather: Impending storm of doom. Shelter: None. Escape vehicle: A not so speedy two person bicycle. It wasn’t going to be sensible to sleep out in the tent without running a real risk of being blown away and we also wouldn’t beat the storm to the next town. This was the beginning of a whirlwind of events which started with the pair of us needing to carry the Flying Fox out of the building site carpark after noticing how it glistened with nails, staples and other tyre puncturing nightmares. We weaved around the town searching out churches which might offer to be our saviour but in the end we wound up accepting a lift from a lady who happened to be finishing work. We dismantled the Flying Fox into two parts, wedged it into her car and accepted a ride to a motel in Oakdale (North of Oberlin). She squeezed in an en-route stop at Walmart for a quick supermarket sweep and waved us good bye from outside the motel. We hung around for two nights waiting for the over egged storm to dissipate before setting out bright and early to pedal…West! 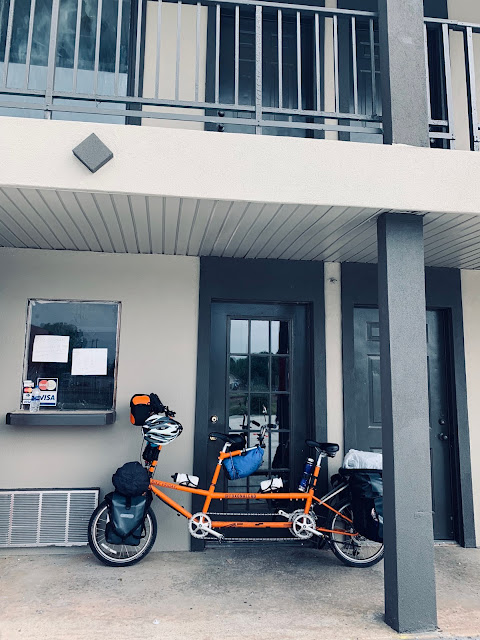 14/Apr. Day 53. Oakdale to Bunkie.
58 Miles. West to go East!
L was horrified when he realised that our impromptu hitch-hike North had also given us a 6 mile advantage East. For most people, 6 Miles wouldn’t cause issue on a trip of 3000-3500 miles but somehow he managed to convince me that for us it would be a major issue. What he suggested we do to rectify this was; cycle 6.5 miles West; turnaround; then continue our travels East. Thoughts about how ridiculously unnecessary it was to add 13 extra miles to our day pinged through my mind continuously during the time we were pointed back towards California, but I also understood L’s rationale. He wouldn’t be able say we cycled all the way across, knowing that we missed a 6 mile stretch. Our return trip detour took exactly 1 hour. 38 minutes to get 'there' and 22 minutes back. We had an appreciated tail wind for the rest of the day. For a while The Southern Tier followed a huge levee, giving us an interesting change of scenery and the chance to have lunch at a waterside cafe on stilts. Sadly our lunch stop turned out to be less water side and mostly underwater, due to huge flooding of the river beyond. Rather than dwell too much on the absence of a burger and chips lunch, we focused instead on getting to our next unusual WarmShowers accommodation and in the interim, fuelled up on Cliff bars (our new favourite). Tonight we would be sleeping in a Fire Station! 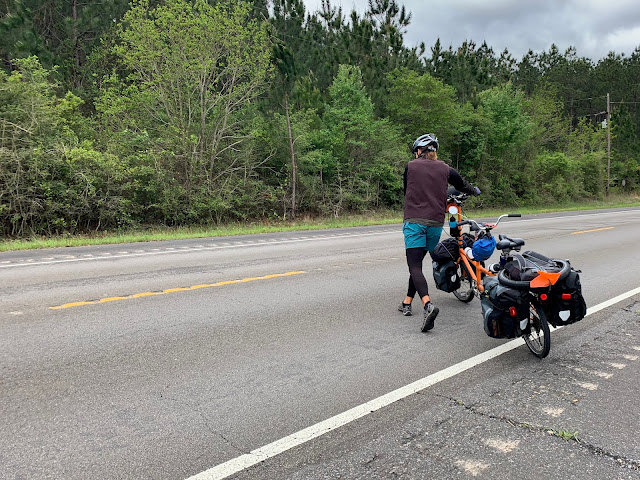 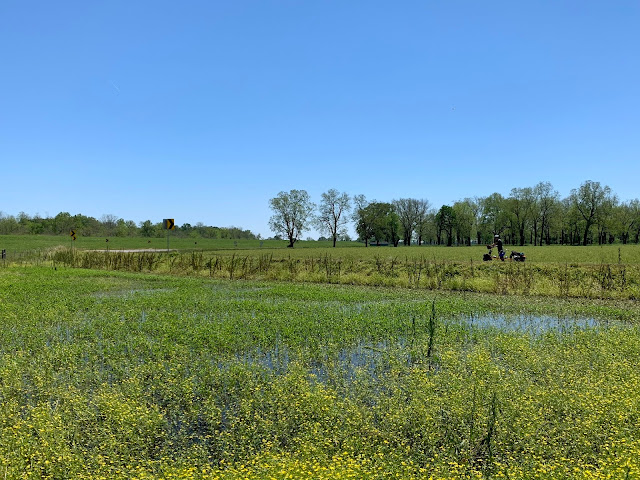 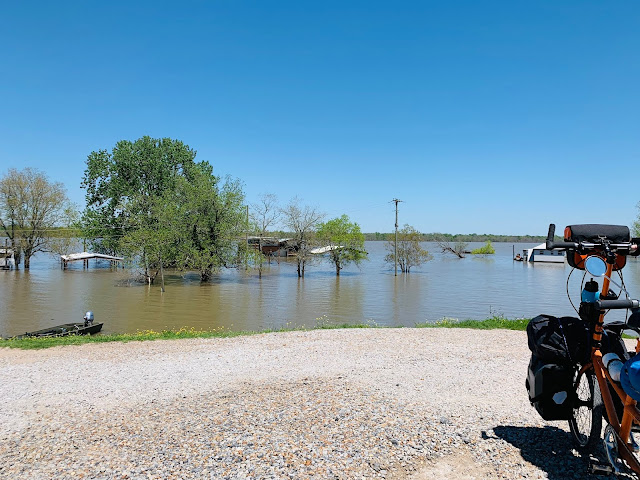 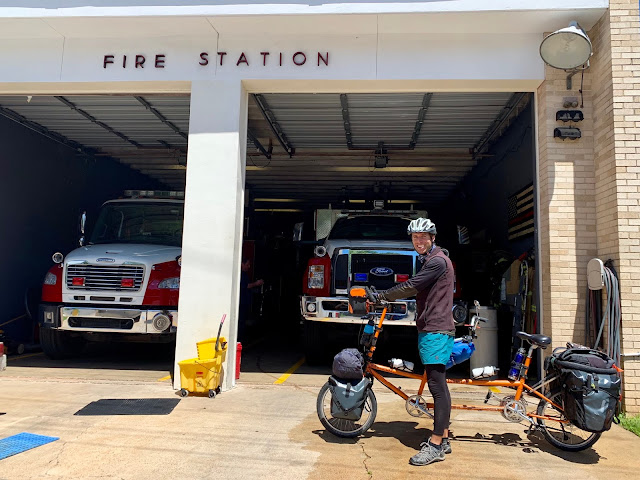 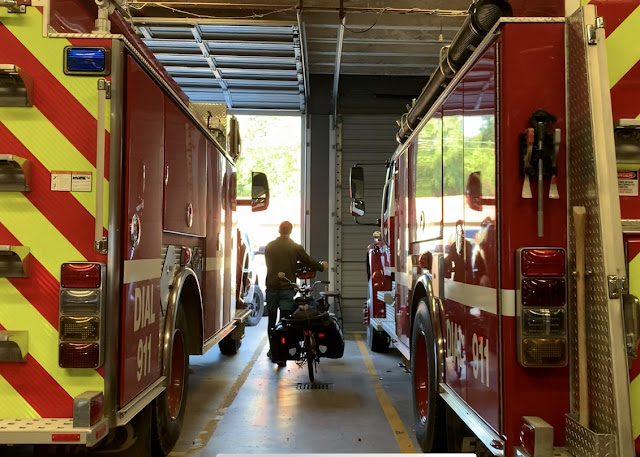 15/Apr. Day 54. Bunkie - New Roads
70 Miles. Last night: Sleeping in the Fire Department.
Whilst The Flying Fox got to spend a night propped up in a garage full of shiny red engines, waking up on the sofa inside the fire station rec room, was to be honest a bit weird. Especially because in that brief semi conscious moment, I’d forgotten where we were. We used their spotless bathrooms and showers, made a small dent in the mountain of donated cakes which were sat waiting to be eaten in their kitchen and we waved goodbye to the other two cyclists, who’d also been staying at WarmShowers No.13 Our early morning departure was into a hazy early morning sun; not great for cycling. In an effort to make ourselves more visible to America’s bleary eyed commuters, I’d wrapped myself in L’s bright orange rain Mac and set going our rear light, which had recently taken to creating it's own very funky red flashing sequence.
Turns out, Louisiana’s roads aren’t as pancake flat as we’d been led to believe but despite this we arrived in great time to the lakeside campground a few miles out of New Roads. Be warned: The shower block is an eye opener but we couldn’t really complain when camping for cyclists is free of charge. If you do want to spend a few dollars, you will find that conveniently placed within the campsite, is bar. A smokey American bar like how you see in the films; several people sat at the bar smoking and drinking, a Hells Angel and a cowboy having a raucous game of snooker and a lady sat in the corner loosing dollars to a slot machine. We stayed a couple of hours and watched the drama unfold. 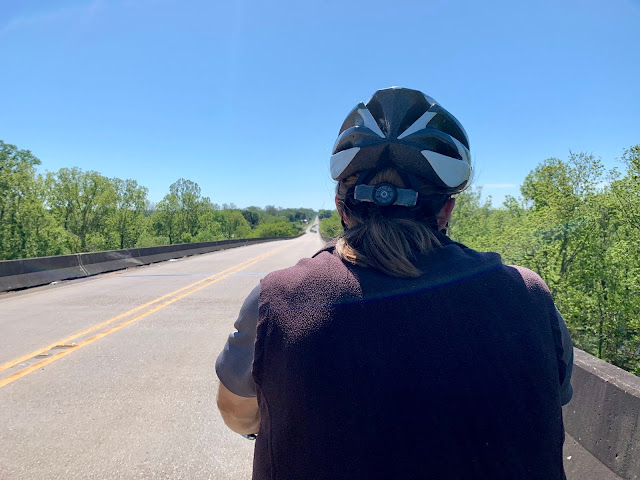 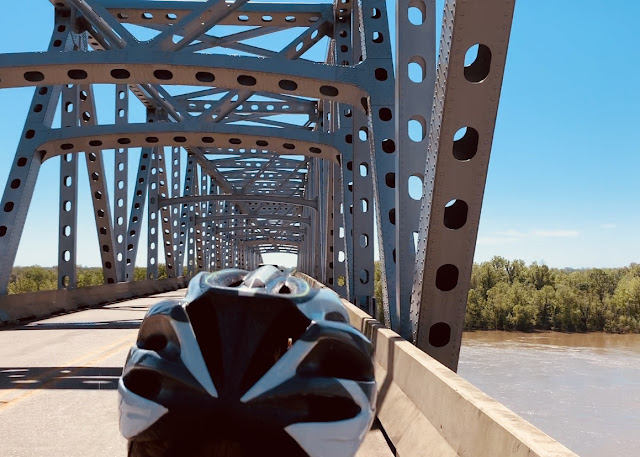 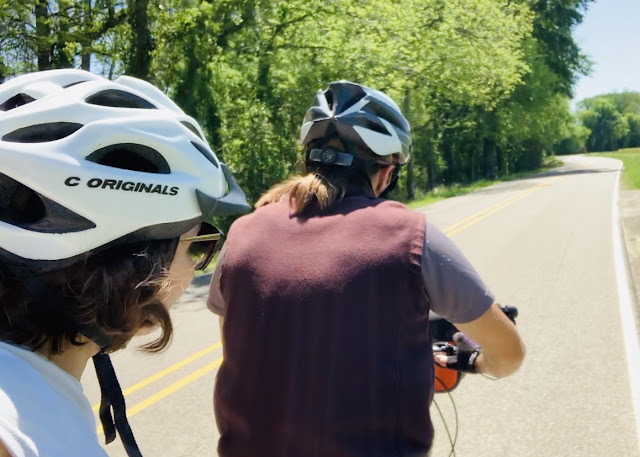 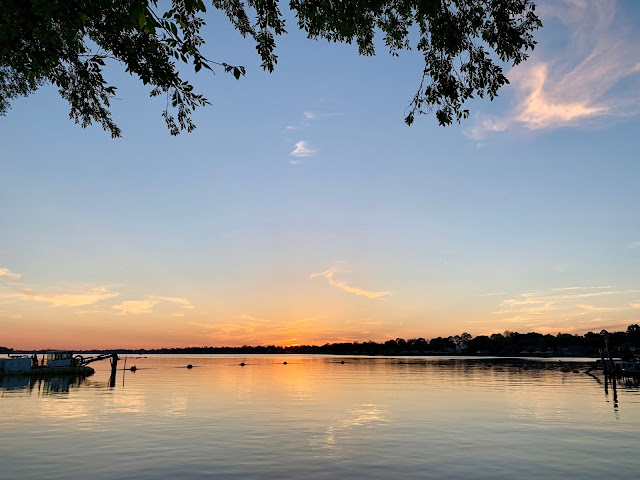 16/Apr. Day 55. New Roads - The Prayer Garden
74 miles. The campground closed 8 years ago.
The adventure Cycling Association is in desperate need of updating this section of digital map. We only had two realistic accommodation options for tonight, both campsites, 6 miles apart and nothing else for a long way. This would have been fine if we’d stayed at the first place and not taken the advise of a local lady who suggested we stay at the second.  Having pressed on for a further 6 miles we discovered the second campsite had ceased to exist… 8 years ago! What wonderful advise that was.
Turning up to somewhere you plan to stay only to discover that it’s closed / fully booked / doesn’t exist / has had a price change or is simply too bad to stay at, brings a sinking feeling. We didn’t fancy a 30minute cycle back to the first campsite site so it was looking like this evening might turn into a less than ideal ‘camp at the side of the road’ situation. We chanced knocking on the door of the closest house. This was where we met Miss Ann; a 92 year old lady, mentally as sharp as a pin and physically aided by her speedily driven golf buggy. Miss Ann had a prayer garden: a quite place for reflection which she opened up to the public. She didn’t ask but assumed L and I we were Christian and married and after reassuring herself of this, she was more than keen to help by offering us a safe place to pitch our tent. We set up on the lush grass, amongst the flower beds in her prayer garden. 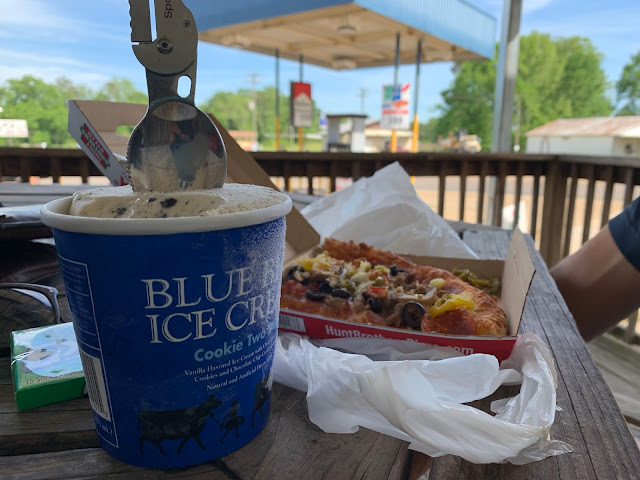 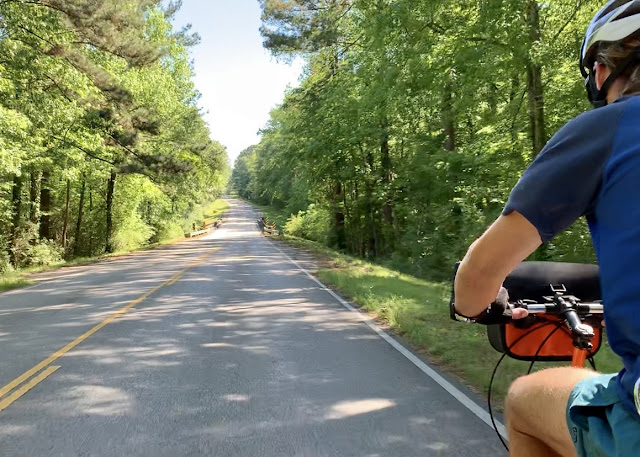 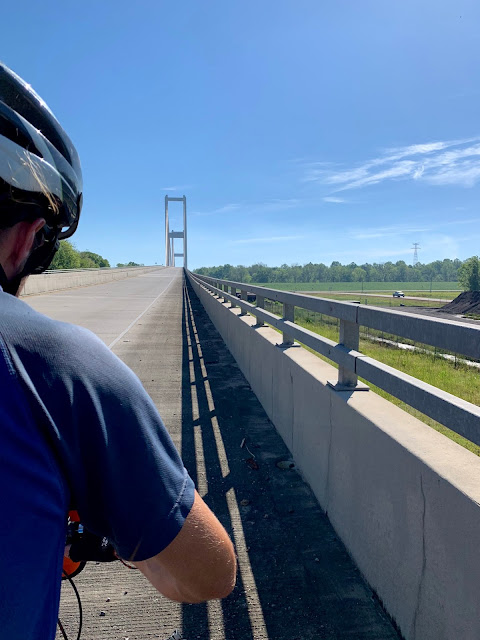 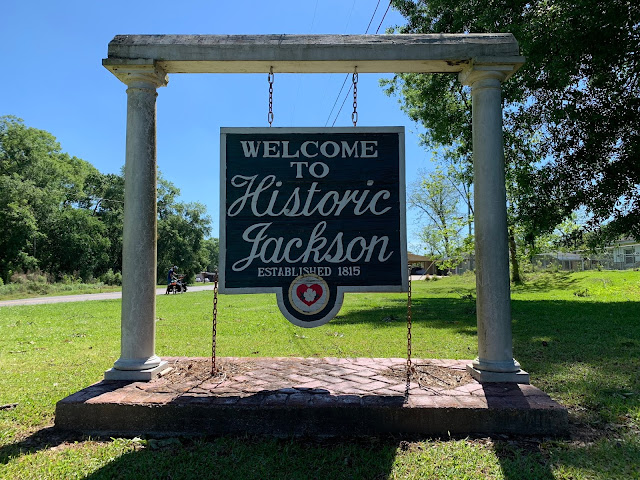 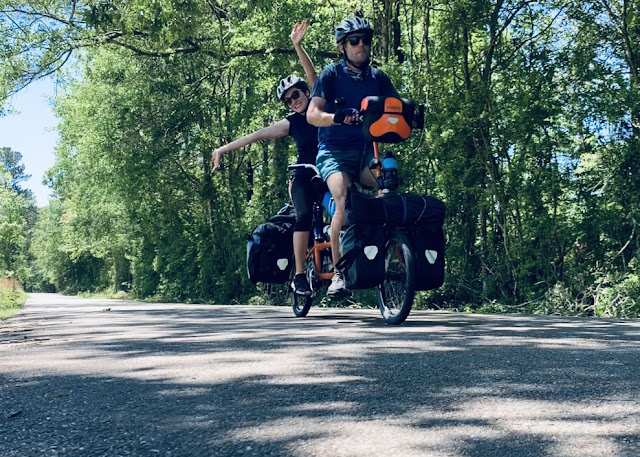 17/Apr. Day 56. The prayer garden - Bogalusa
53 Miles. The McDonalds coffee fiasco.
Luckily we’d already packed up the tent when Miss Ann’s gardeners turned up to manicure her prayer garden; otherwise we might have woken up to the hum of a strimmer and a chance of our guy ropes being severed. We thought Miss Ann had buzzed down in her golf buggy to wave us goodbye but she had other ceremonial ideas. This was the second prayer circle L and I had inadvertently become a part of. Our hands were grasped, our arms were caressed, words were spoken and invisible symbols drawn on our foreheads. Miss Ann was delighted to be our saviour.
By 8:30am we were coasting over the rollers in the blazing sun on our orange flying machine, cruising towards the nearest (and only) coffee dispensing outlet… McDonalds. Coffee had been absent from the trip over the last few days. We’d been unsuccessful in finding an independent coffee shop which looked capable of making something worth drinking. For L, the coffee nut, withdrawals had already set in and his inner grouch was about to be released. Sir, did you say "Caramel Macchiato?” “No, double Am-er-ic-ano” L repeated but it would never arrive. I’d almost finished my Mocha by the time L left our table for the 3rd time to enquire where his drink was, it had been over 15 minutes. L was handed a drink ‘to try’ and fed some trash about the machine not working properly. He was pissed off by this point and so demanded a refund. We left with more change than when we entered. L justified their mathematical incompetence as small compensation for wasting his precious cycling time. Accommodation for tonight: Camping. Price $15. Facilities: Immaculate. 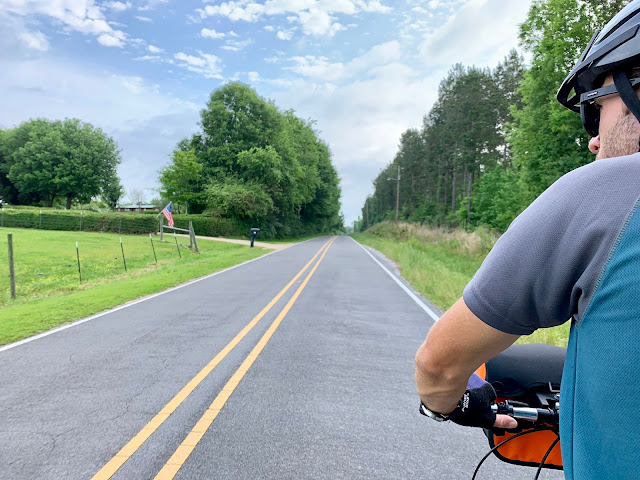 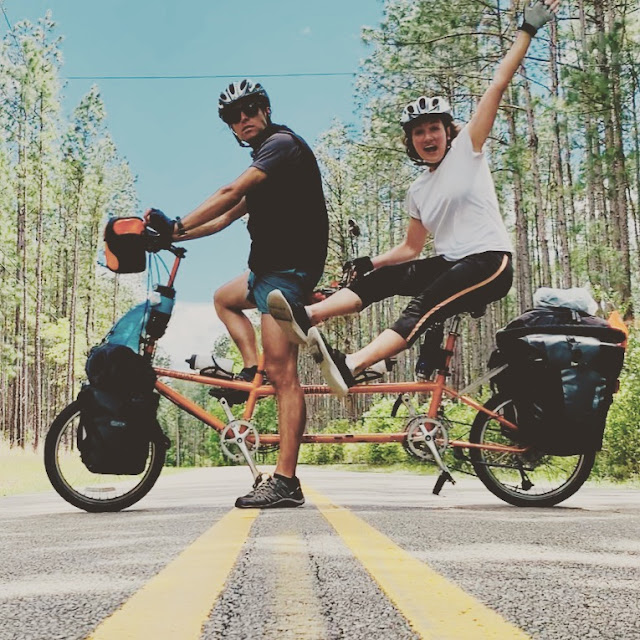 NEXT UP: NEW STATES! ROLLING IN TO MISSISSIPPI & ALABAMA and the beginning of the tornado disruption!