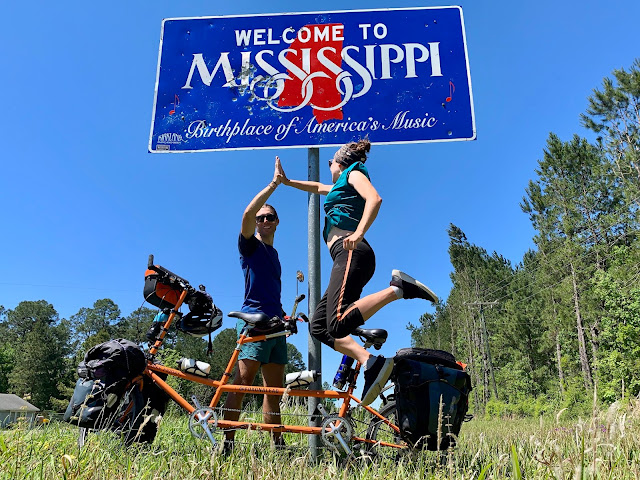 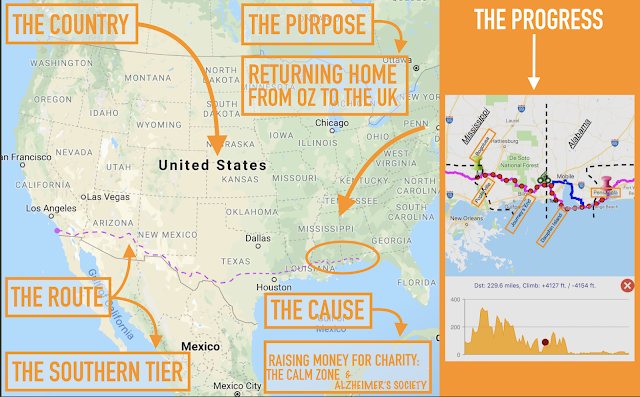 18-19/Apr. Day 57 & 58. Bogalusa - Poplaville - Journey’s End.
103 miles. MISSISSIPPI & "Run Forrest Run!"
After a flying 26 mile ride into Poplaville, it was good morning Mississippi! A gregarious lady from the pharmacy managed to successfully guide us to her town’s only BnB despite spending most of the journey peering through her rear view mirror to check the tandem behind her was keeping up. The BnB turned out to be fully booked but the elderly owner had another room rental option in a house across the street. Whilst L waited outside babysitting The Flying Fox, I found myself needing to make up an excuse as to why we wouldn’t be staying afterall. The house was large but dingy, clean but smelt of must and in general, looked like it was stuck in a time warp. For the same price I thought we’d take our chances and rent a campground cabin a couple of miles out of town.

We’d forgotten to ask for the wifi code so L had volunteered to nip back to the office across the open grass campground. Mid way back, the downpour began and his urgency to return to our little wooden cabin increased. A distant voice could be heard shouting “Run Forrest run". I watched from our porch, humoured by the mystery voice as L kept running.

According to the guy on the live weather channel, the storms brewing a little North West of Poplaville were big! The tv remained babbling away in the background so we’d at least get a heads up if it looked like our cabin was about to be blown away by a tornado. The weather guy, who’d been tracking the storms all evening, would periodically warn those now in the path “You should be in a safe place right now, if you are not you have left it too late, the tornado is about to pass over you. Frightening stuff! I discovered that Google also has a realtime ‘crisis map’; a live layer over the regular map. This also proved quite handy in making sure a tornado wasn’t coming in our direction. 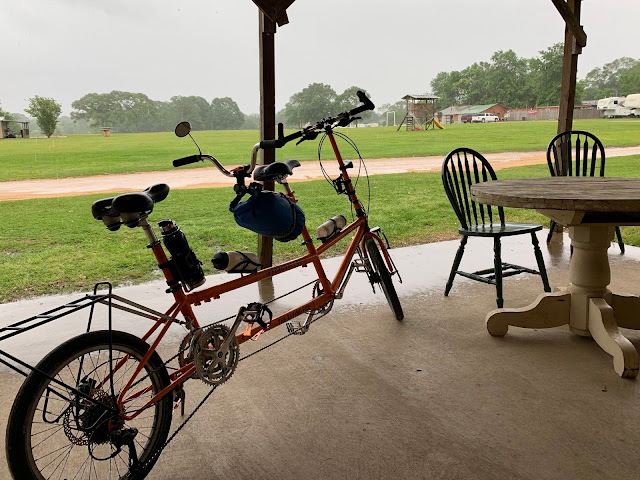 By morning the apocalyptic rain had ceased and the sun was creeping out from behind the clouds, it would be another warm day. Unfortunately the roads had yet to dry up and so our 20inch wheels would begin their morning exercise by kindly whipping up dirt the onto the backs of our legs and in particular, mine. We rode many rural miles of tree lined roads in absence of any civilisation until we finally arrived, in our usual dishevelled and sweaty condition, at Journey’s End. Journey’s End was an independently owned campsite, friendly to cyclists and perfectly positioned right next door to an al fresco bar and grill advertising a bbq and blues night. Win. 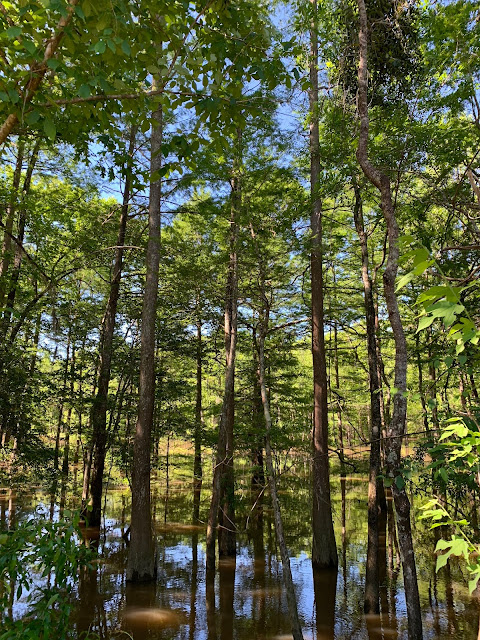 20-21 Apr. Day 59 & 60. Journey’s End - Dauphin Island - Pensacola
139 Miles. HELLO ALABAMA!
“Y’all take tents? This turned out to be our go-to phrase when it came to asking for camping over the phone. We’d been adopting the lingo since Mississippi after noticing a strong trend in recent communicative difficulties. Fluffing up enquiries with the usual British pomp and politeness had only drawn blank silences and confusion from down the line. ‘Bicyclists’ (which neither of us had realised was a real word) had also entered our vocabulary, replacing ‘cyclists’ and no longer sounded strange to either of us. In fact “Y’all bicyclists?” was a question we were often asked, especially as we were spending most of our waking lives wandering around new places wearing helmets. Inquisitive locals were mostly surprised that L and I weren’t carrying a lethal weapon. A guy with a handful of missing teeth, filling up his battered truck at a fuel station in the middle of nowhere, took delight in telling us that he didn’t even go to his mail box without a gun!” Sounded to us like he was in desperate need of relocating his mail box.

On the topic of audible tones; L had assured me that the high pitched squeak I’d started to hear, was nothing more than a cute little bird. This turned out to not be true. We both agreed  that it was somewhat unlikely the cute little bird had been following us all day. Further investigations would reveal that our brake pads needed tweaking, another thing to add to L’s ’to do’ list.

By midday we’d exchanged Mississippi’s endless views of trees for Alabama’s endless views of seas. We’d made it as far as the Gulf of Mexico and after powering up over a few humpy bridges, we spent the night on Dauphin Island (bizarrely tenting under a stilt house of someone who we never got to meet). The following morning we rolled The Flying Fox onto the car ferry and enjoyed a 40 minute cruise across Mobile Bay. By the end of day #60, our coastal route through Alabama had crossed into Florida and we’d arrived in sunny Pensacola. Accommodation: The good guys at Pensacola First United Methodist Church. 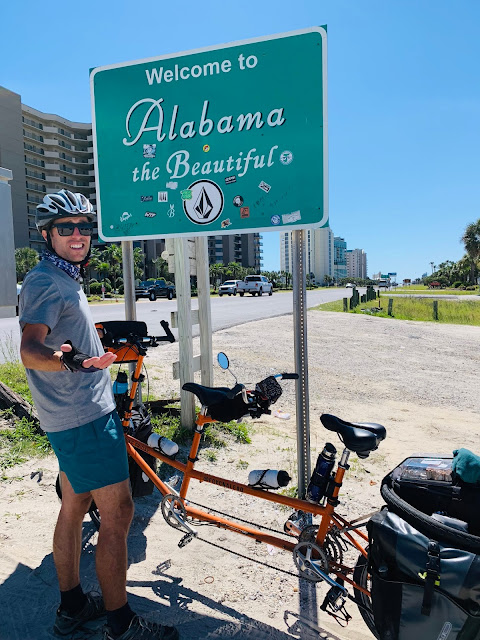 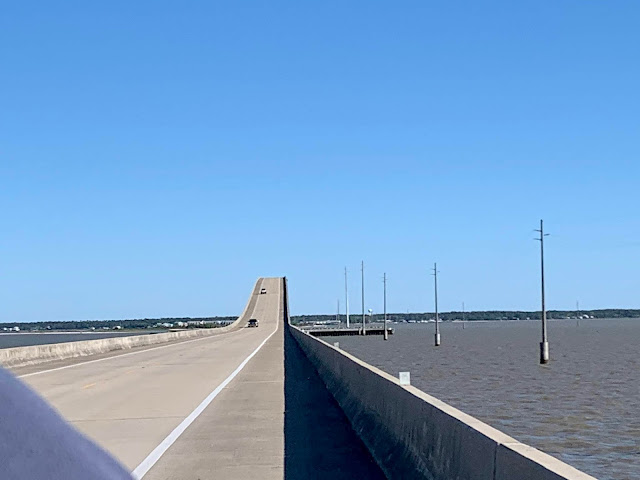 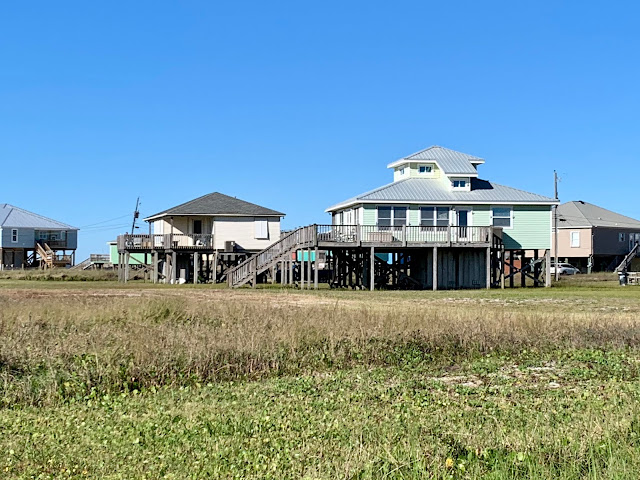 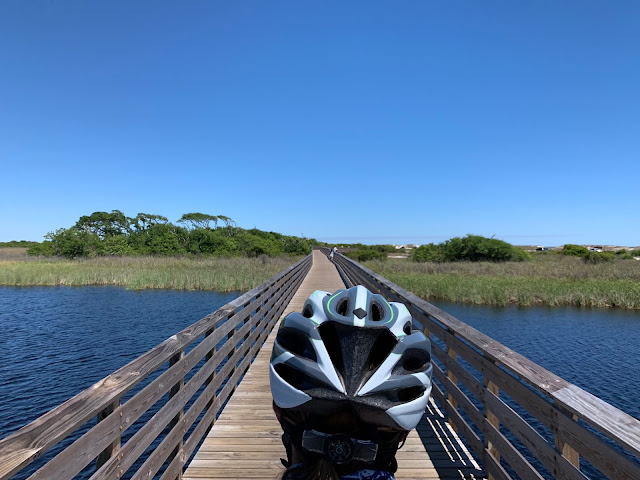 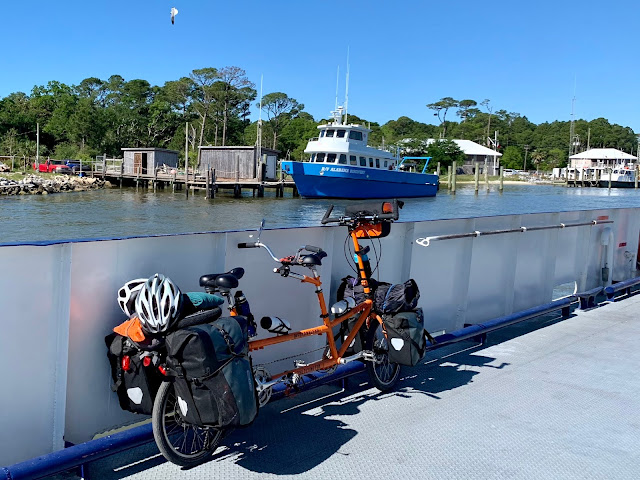 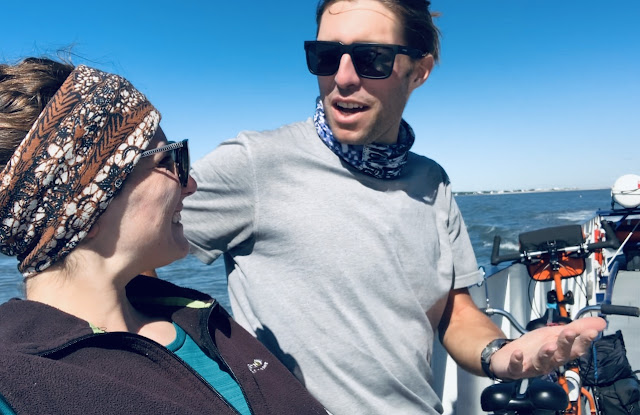 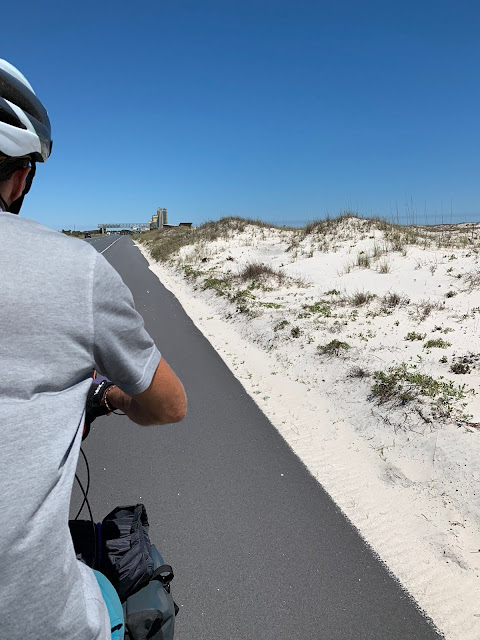 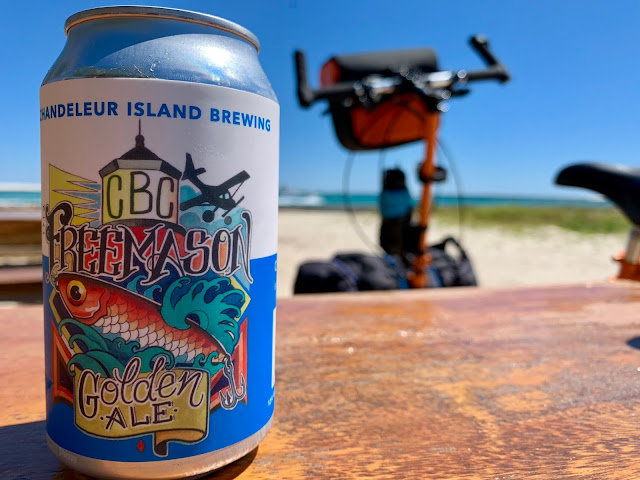 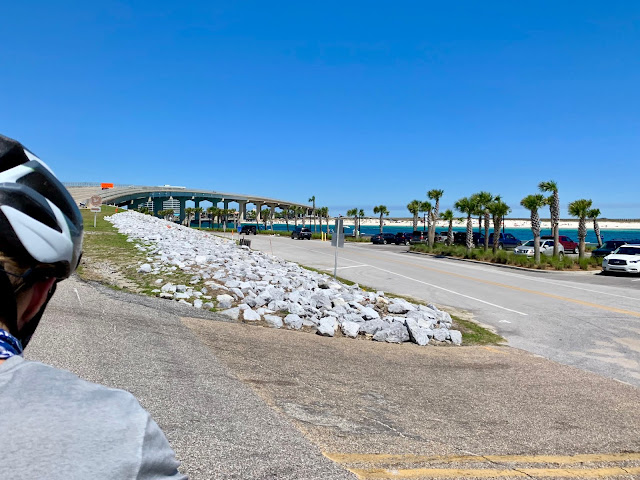 Side note: A cyclists guide to escaping dogs.
So far we’d had our fair share of dog chases whilst cycling the Southern Tier. Louisiana in particular, offered up plenty of ‘Runners’ sometimes over seven in a single day! You see, dogs can hear a bicycle coming from a mile off, it’s really quite remarkable. Usually you’ll  hear the faint, distant barks several minutes before actually setting eyes on the beast but if they’re in stealth mode, you can forget the pre arrival warning barks and expect a surprise attack instead. Take for example our unfriendly Alsatian in West Texas who darted out from behind a derelict looking house (in the middle of nowhere) and tore our rear pannier as he tried to down the bike. One particular dog in Mississippi who was going loopy behind his owners fence had even heard us coming over the heavy traffic noise of a double lane highway which separated us and him. I’ll conclude with saying that dogs are a nuisance to anyone peddling two wheels and a tandem generously offers up twice as many feet to snap at. Breeds aside, we devised a system to categorise all four legged furs, which helped us identify the potential threat level whilst we were on the move.
Chain dogs: Tied to a tree, a porch or other solid structure. Identification: Listen for a clinking chain or look for a rope. Threat level: None. (A running chain dog should always bounce back!)
Fence dogs: Loose behind a property boundary. Action: Immediately scan the fence line for weak points, gaps and gates. Speaking from experience, smaller dogs can run through gaps and bigger dogs can jump. Threat level: Medium.
Runners: Those free to chase, either from the get go or as an escaped ‘Fence dog'.  Action: Start shouting, retrieve (handily placed) whacking stick, ready squeezable water bottle and grip pepper spray tightly. Prepare to stop if an attack is imminent. Threat level: (Small dog) High. (Big dog) Severe. 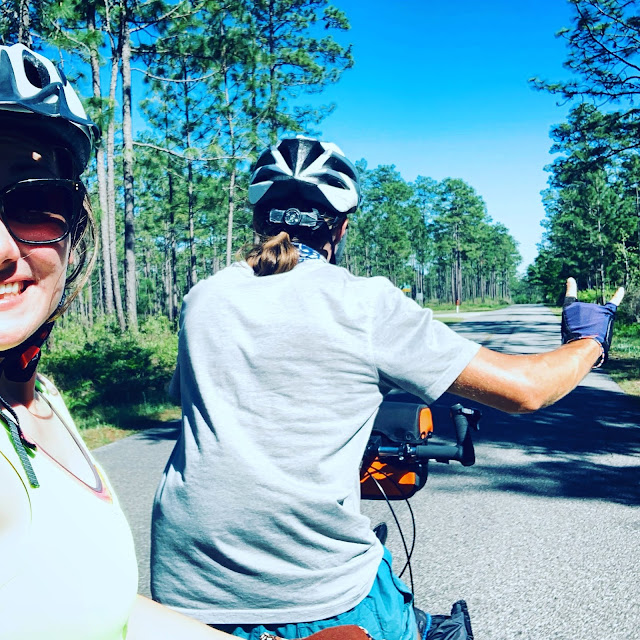 NEXT UP: SUNNY FLORIDA…Alligators, manatees, snakes and turtles...and ONLY 500 MILES TO GO!

******************
A little extra note: We are raising money for two great charities as we cycle home to the UK from Australia, across the landmass in the middle... AMERICA. If you'd like to sponsor us, that would be amazing, here is the link to our just giving page where you can also find out more about the charities: CALM and Alzheimer's Society. Thank you to all who have donated.